Bring Back the Treasuries!

Home » Bring Back the Treasuries!

One thing I miss about today’s comics culture is the treasury edition — that oversized goldmine of comics glory that brightened the Bronze Age.

The treasury edition, as if you didn’t know, were tabloid-size comics with cardboard covers published primarily by DC and Marvel in the 1970s. They could feature original stories or reprints, or both. In any event, they were awesome.

Rob Kelly, the editor of the book “Hey Kids, Comics! True-Life Tales from the Spinner Rack” and a prolific blogger in his own right, is the world’s greatest authority on treasury editions. Or maybe he isn’t. That’s hard to measure. But he does have an exceptionally detailed website devoted solely to the format and if you’re not careful, you could find yourself lost in there until they send out the search parties.

Rob’s a friend of the ol’ 13th Dimension, so he and I had a back-and-forth about that magical style of comic book: 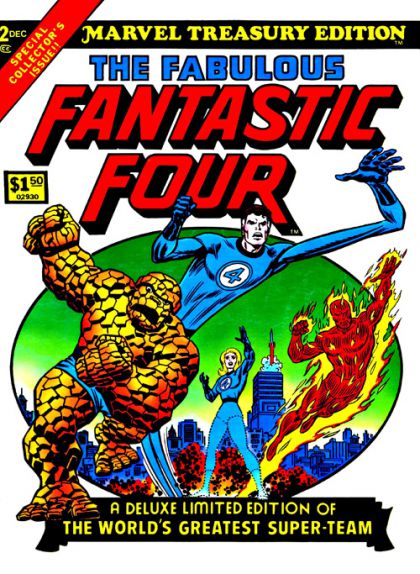 Dan: You’re the maven: What’s the brief history of the treasury edition?

Rob: Well, when most comics fans talk about “treasury editions,” they’re really talking about the oversized books DC and Marvel put out from 1972-1982(ish). But DC’s first-ever series, New Fun Comics from 1935, was printed in the treasury size, 10 x 15, to replicate the style of newspaper Sunday comics inserts.

Other publishers dabbled in putting out comics that size (Fawcett’s Master Comics, Charles Biro’s Tops, Fiction House’s Jumbo Comics) through the ’40s, ’50s, and ’60s, but it wasn’t until DC and Marvel decided to do them that the format really gained popularity.

By the early 1970s, circulation figures were dwindling across the board, so both companies started trying different formats –100-page giants, black-and-white magazines, digests, and treasury editions. Right off the bat, DC and Marvel marketed the treasuries as something special, labeling them “collector’s editions” — unlike their regular comics, they offered them directly from the company as well as on newsstands and the like.

DC started off their line of treasuries with Rudolph The Red-Nosed Reindeer, Shazam!, Tarzan, and The House of Mystery (not Superman or Batman, unbelievably), while Marvel decided to throw the ball right over the plate — they gave all their major stars a crack at the treasury format in succession: Spider-Man, the Fantastic Four, Conan, the Hulk, Thor, the Avengers, etc.

Marvel was so, er, big on the format that they offered copies of Marvel Treasury Edition #1 signed by Stan Lee and John Romita which, to my memory, has to be one of the first times a publisher ever acknowledged that the signatures of the creators was something you would want, something that made a comic extra special.

I distinctly remember my mother buying me a Famous First Edition of Flash Comics #1 from 1975, which means I would have been 4, 5 years old at the most. The comic was so huge, so impressive, that it installed in me a love of the format that remains to this day.

After the Flash, did you start hunting them down or was that later?

Well, this was when they were originally published in 1975, so I wouldn’t have known how to track them down even if that had occurred to me. Back then, as far as I knew once a comic left the newsstands, it was gone forever.

But I made sure my parents bought me every treasury I could. Not only did the size continually impress me, but the fact that Marvel and DC also stuffed the books with fun little bonus features, or stuff that I didn’t normally get to see — case in point, Limited Collectors’ Edition #C-37, an all-Batman issue, featured a sequence from the 1940s Batman newspaper strip, something I didn’t even know existed. I distinctly remember Two-Face dying at the end, and I was like, “Um, what?” I must have read it a thousand times. They would also run puzzles, how-to-draw segments, pin-ups, articles on live-action versions of the characters … the books really did feel special.

The best treasury ever.

My father would occasionally put in a Saturday at his office, and since my Mom was working too he would take me with him. We’d stop at a department store (Woolworth’s, usually) and he would buy me two or three of them, and I would sit at his secretary’s desk for hours, never making a peep. Considering those books were only a buck or so apiece, he got peace and quiet for a whole afternoon for only three or four bucks. Not a bad deal!

The treasuries were also informal history lessons on comics. Since they were, often as not, reprint collections, I got a chance to see dozens of comics stories that I normally never would have had access to — Golden Age Batman stories, C.C. Beck’s Shazam!, Lee/Kirby Fantastic Fours, etc. It made the world of comics feel bigger, both literally and figuratively.

When did you begin tracking down treasuries in earnest? And did you have a Holy Grail that eluded you for a long time?

I would look for treasuries at conventions every so often, but the prices were usually beyond what I was willing to spend; plus because they’re so hard to store that I could usually only find them in really poor condition. Once I discovered eBay however, then all bets were off — I tracked down every DC and Marvel treasury that there was, even ones I didn’t really want (Am I really bidding $20 for the Marvel Smurfs treasury? Yes I am) until I had them all.

There never really was a holy grail, because it was fairly easy to find all the DC and Marvels on eBay. Once I launched the TreasuryComics.com site, though, I realized there were dozens of treasuries from other publishers that I didn’t know existed. So then the collecting process started all over again!

If that’s the case, then, which do you deem your most valuable? Or favorite?

I only deal with favorites; and while I love all of them (okay, maybe not Marvel’s Annie movie adaptation), there are a couple that I distinctly remember having as a kid and are especially beloved:

Limited Collectors’ Edition C-40 – Dick Tracy, DC. The one and only time DC licensed the Dick Tracy strip, it featured an ongoing continuity starring Flattop. I don’t think I had ever seen Dick Tracy to that point, and I just fell in love with it. I didn’t really understand the difference between comic books and comic strips, though I could tell this was different than what I normally saw. It launched a love of the form that continues to this day, and was a major inspiration for my webcomic Ace Kilroy. I always wondered why DC never did it again, so a year or so ago I asked longtime DC staffer Bob Rozakis and he told me it sold so poorly there was never an impetus to do it again. I don’t know what was wrong with my fellow 1970s kids!

Limited Collectors’ Edition C-47 – Superman Salutes The Bicentennial, DC. A classic case of bait-and-switch: The title and cover feature Superman, but on Page 1 he introduces the stories, which were old Tomahawk reprints. I have an appreciation for that stuff now (sort of), but when I was a kid I couldn’t have cared less. Ripoff! Luckily though, the back cover featured a history of the U.S. president, in order, along with the years they served. It helped inspire a love of history (specifically presidential history) that, like my love of comic strips, continues to today. I have a friend whose little boy is a nut on the subject of the presidents, so as a Christmas present I scanned the back cover and added all the presidents that have come since.

Marvel Treasury Edition #18 – The Astonishing Spider-Man. I bought this one while my family and I were on vacation in the Pocono Mountains in Pennsylvania, which we did every year around my birthday. The cabin we rented didn’t have a TV, so I read tons and tons of comics. This book featured various Spidey team-ups, along with some great puzzle and gag pages by the incomparable Marie Severin. Spider-Man and the X-Men vs. Morbius the Living Vampire, drawn by Gil Kane, at a giant size! How can you beat that?