Menachem Luchins bids farewell to one of his favorite titles, which wraps this week: 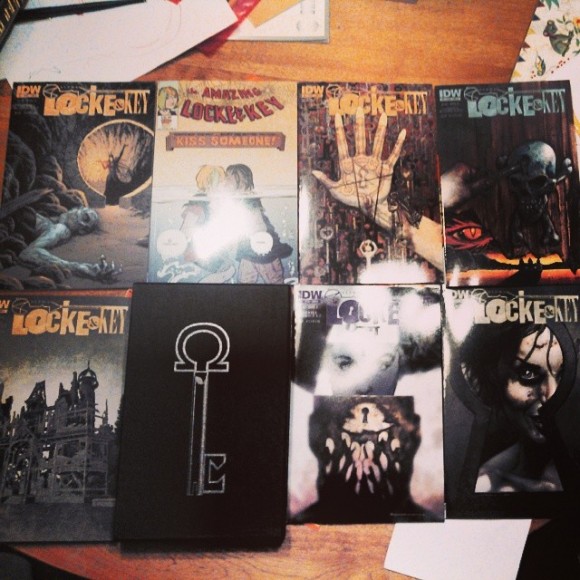 Around when I was Kickstarting my comic shop, Joe Hill and Gabriel Rodriguez announced that the next volume of Locke & Key would be their last. I quite hubristically offered to throw a special “farewell” party at my shop if my project got funded.

Well, my project didn’t get funded but tomorrow Locke & Key comes to an end. Sadly, very few of my patrons get the monthly issues, though I’ve turned many of them on to it in trades and they all eagerly await the last one in January.

I wanted to give thanks to Misters Hill, Rodriguez, Fotos and Ryall and all those at IDW for this amazing book and the wonderful work they have done on it. Many of the customers I have are first-time comic readers and Locke & Key was the book that “clicked” with them, the one that turned on that light that showed them the full power of the medium. So, once again, thanks.

And, hey, while I might not be having that party in reality, this little one (above) with the likes of Kaluta, Sim and Wrightson is pretty damn sweet on its own.

Menachem runs Escape Pod Comics in Huntington, Long Island. Dude’s got good taste. I should know. He turned me on to “Something Terrible,” by Dean Trippe. And look how that turned out. — Dan