BATMAN’s KEVIN CONROY: The Voice of a Hero — And So Much More

Home » BATMAN'S HOT-LINE » BATMAN’s KEVIN CONROY: The Voice of a Hero — And So Much More

An APPRECIATION by podcaster and Batman expert Chris Franklin…

This was the first thing I could think of to post on social media after hearing the news that Kevin Conroy had passed away. Despite the fact I was in the middle of a very crucial project with a looming deadline at my day job, I stopped in my tracks. It was as if someone had told me a close friend had left us.

And honestly, I’ve spent more hours with Kevin Conroy’s Batman than with many of my friends. And not just the times I’ve actually heard Conroy speak as the character on numerous TV series, movies, video games, and even a few toys. Like many of us, I’ve had his Batman in my head for 30 years, replacing nearly every voice that I had conceived for the character before. Whenever I read a comic with Batman in it, there was Conroy’s voice, emerging from the Batcave of my mind. In that way, he inhabited the character more than any actor. And he put more hours in as the character than any actor as well. 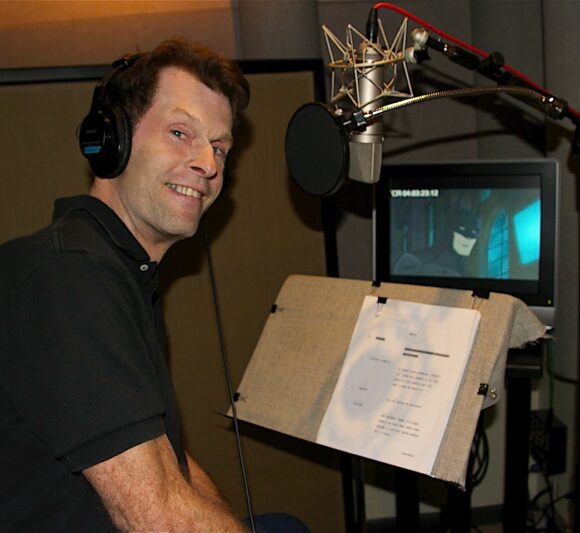 But it wasn’t just the time Conroy put in that makes him, for many, the definitive voice of Batman. It was how he inhabited the role through his voice. Michael Keaton had given us a whispery, raspy Batman voice to differentiate from his natural voice as Bruce Wayne. Conroy’s Batman was more akin to his actual speaking voice, just an octave or so deeper. His initial take on Bruce Wayne was light, flippant, and airy. Not a care in the world. Of course, it was an act. Conroy’s Batman was the REAL persona, and Conroy’s Batman voice was his REAL voice. He just went to a deeper, darker place when performing the character. That’s not to say Conroy’s take was always morose and somber. His Batman could sling a wicked barb at Mark Hamill’s Joker, frustrating the Crime Clown by coming up with a funnier line than him. Or, he could throw back a sarcastic retort to Efrem Zimbalist Jr.’s sardonic Alfred. He could even get a bit sultry during playful interactions with Adrienne Barbeau’s sexy Selina Kyle/Catwoman.

As powerful as his vocal performance could be (just see his iconic declarative “I am Batman!” speech from Batman: The Animated Series’ “Nothing To Fear”), he could show true vulnerability, just by revealing the slightest catch in his voice. The moment in the film Batman: The Mask of the Phantasm, when a young, happy and in-love Bruce Wayne admits to his parents’ grave, “It just doesn’t hurt so bad anymore” is one that always comes to mind.

Conroy’s Batman also evolved over the course of the Bruce Timm-led DC Animated Universe series. When Batman: The Animated Series was relaunched as The New Batman Adventures, Batman was much less talkative and more reserved, despite now surrounding himself with a surrogate family at all times. His Bruce Wayne was also closer to his Batman, as if a balance had been reached, and Batman was somewhat more content at just being more himself, forgoing much of the act.

If there was any question on which persona was the true one for Conroy’s Batman, you only have to recall his wonderful delivery in the Batman Beyond episode “Shriek.” Eighty-year-old Bruce Wayne tells young Batman Terry McGinnis (played by Will Friedle) that he knew he wasn’t insane when he heard voices in his head calling him “Bruce.”

“In my mind, that’s not what I call myself,” he says. When Terry gets that he’s referring to Batman, he replies, “But, that’s my name now.” Conroy nails the dripping delivery of “Hmm. Tell that to my subconscious.”

Conroy often got the best lines in the ensemble Justice League series, and it’s follow-up, Justice League Unlimited, telling Superman with a wry smile in the series finale “Don’t you have a tall building to go leap?” Of course, JLU’s “This Little Piggy” showed us Batman, and Conroy had a power no one expected… they could sing!

My family and I were fortunate enough to meet Conroy at a comic convention in Louisville, Kentucky, in 2018. He was set up right next to his BTAS co-star Loren Lester (Robin/Dick Grayson/Nightwing). I brought original Kenner BTAS action figures of Batman and Robin for them each to sign, but in our enthusiasm in talking with Conroy, he signed the Robin as well. When he noticed this, he responded in a voice not unlike his Batman: “That’s not me… that’s Robin!” 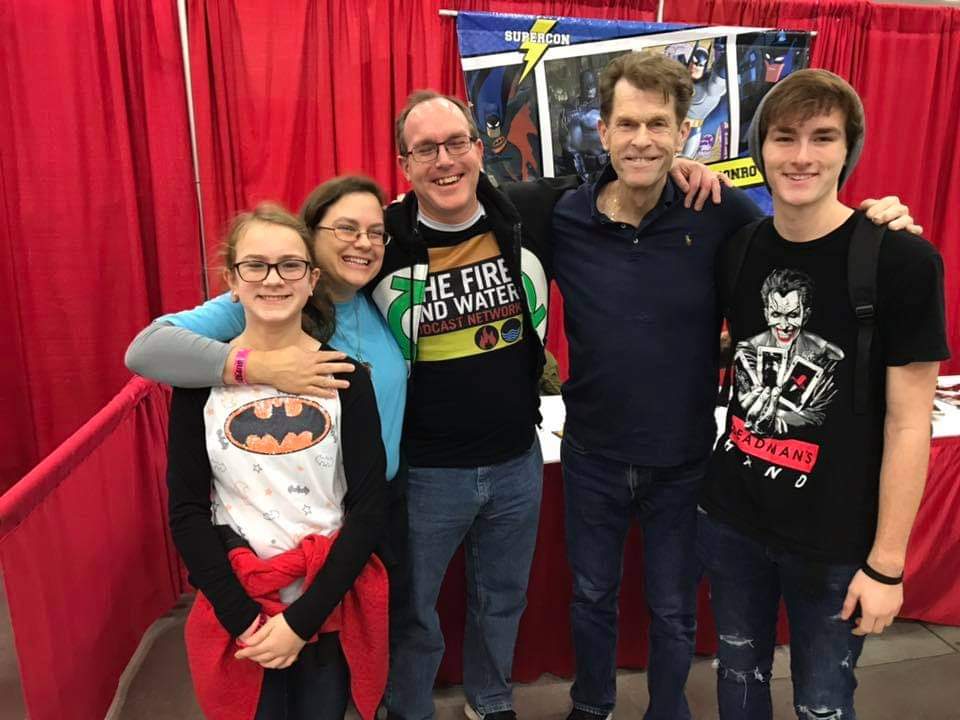 Batman and the Franklins

We were delighted at his exasperation, and the fact that he referred to himself as Batman, just like Bruce Wayne. Even better was Loren Lester’s ribbing response, just like smart-aleck Dick Grayson would have thrown at his mentor. We managed to snap a picture of the Dynamic Duo mid-hug. It was wonderful. 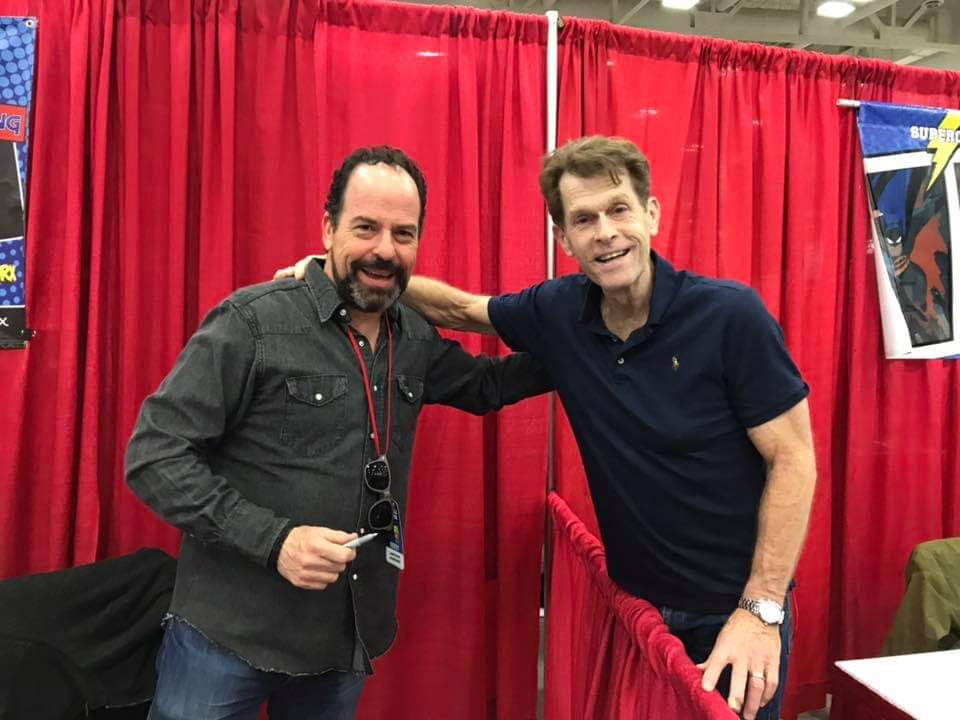 Kevin Conroy is THE voice of Batman, not only because his gravelly tones perfectly fit the role. Not only because he was able to bring nuance and feeling to a character who was often written to be withdrawn and emotionally distant. It’s because of all these things. His Batman, or Batmen if you consider the versions he played in DC animated films, Arkham series of video games and the like, were multi-faceted, often deeply conflicted individuals. In other words, they FELT real. With a lesser actor behind them, the emotional impact wouldn’t have hit like it did.

There was a truth to Conroy’s Batman that was inherent in every word he spoke as the character. In recent years he revealed that he connected to the character by relating to his own troubled upbringing, and his need to hide his homosexuality from the public, to ensure his professional success. The results are obvious. Conroy’s Batman was tortured child, victim, surrogate son, avenger, protector, millionaire playboy, father figure, mentor, teammate, Caped Crusader, and Dark Knight. He was all those things, and none of them ever seemed wrong or in conflict with the character.

He brought a humanity to the part no other actor has been able to do. Partially this was because Conroy had more opportunities, but the majority was just talent, and an understanding of the persona. He put the MAN in BatMAN. His Dark Knight was a living, breathing character. A hero. A friend.

He was vengeance. He was the night. HE was Batman. 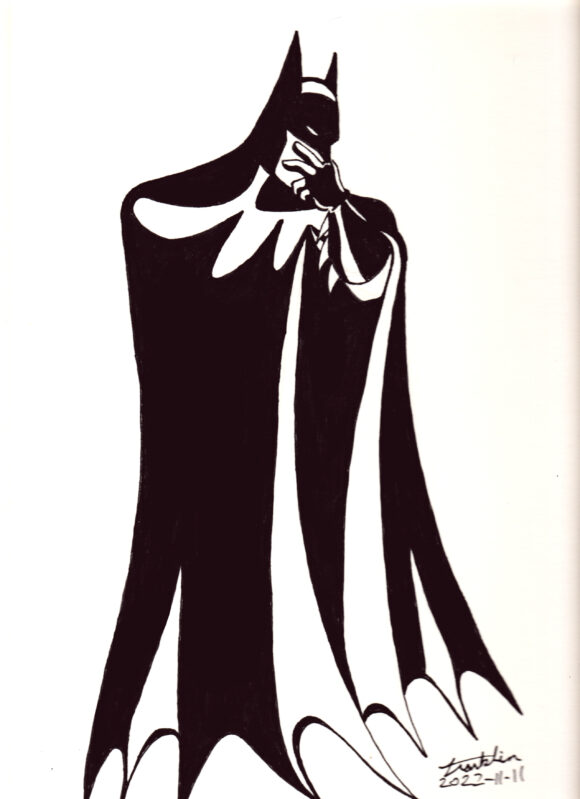 And he’s gone. Batman has lost his voice, and maybe even his soul. Although if we ever get to see the Batman: The Caped Crusader animated series produced by Bruce Timm, Matt Reeves and J.J. Abrams, originally meant to stream on HBO Max, we’ll hear him again. But then, eventually, there will be… silence.

But in solace, I can’t help but think of one of the greatest episodes of BTAS, “Robin’s Reckoning, Part 1” and Conroy’s wonderfully warm and caring delivery when a young Dick Grayson who has just lost his parents, asks Bruce Wayne if the hurt ever goes away.

Chris Franklin is a graphic designer, illustrator, and podcaster, who co-hosts several shows on the Fire and Water Podcast Network, including JLUCast, which he produces with his wife Cindy. Needless to say, the show will never be the same, referring to Conroy in past tense.

— KEVIN CONROY, THE VOICE OF BATMAN, DEAD AT 66. Click here.

— The SECRET ORIGIN of BATMAN: THE ANIMATED SERIES — With Commentary by KEVIN CONROY. Click here.