TOYHEM! Amazing how a couple of bottles of bubble bath can make such a difference in your life…

I can’t be sure which I got first but there’s no question that my two earliest Batman toys were the Corgi Batmobile (with Batboat and trailer) and a pair of Batman and Robin Soaky bubble bath bottles by Colgate.

Besides the fact that these kindled an almost lifelong passion for Batman toys and collectibles, they were damn fun to play with, starting at, oh, I dunno, 3 or 4 years old. 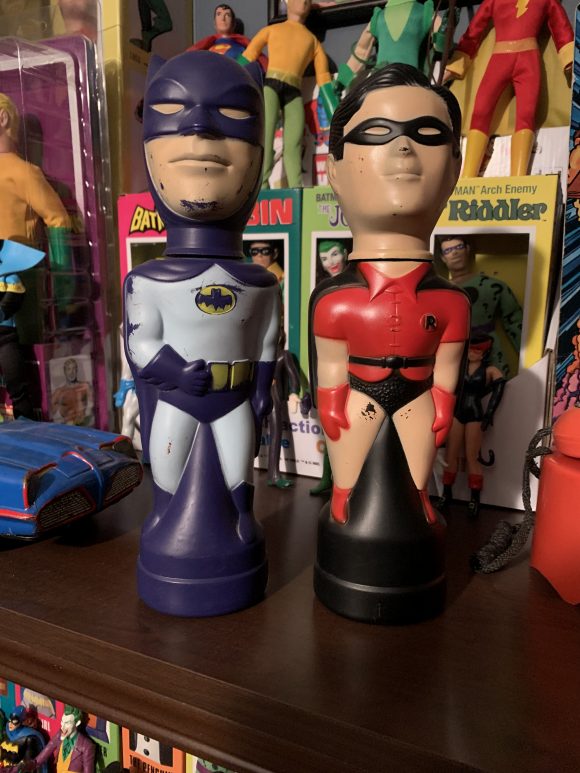 I could go on and on about the Corgi vehicles but comics writer Dan Jurgens did such a wonderful job on them in 2019 (click here) that I wanted to take this moment during this year’s TOYHEM! to ruminate on what were essentially my first action figures: the Batman and Robin Soakies (Soakys?). 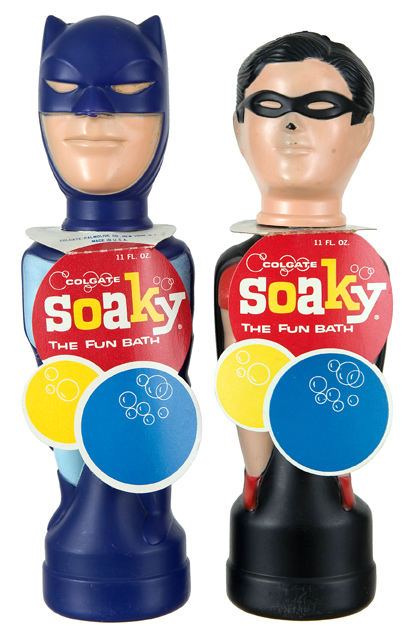 They came out in 1966 but I got mine several years later– sans labels.

Naturally, the “action” aspect was limited. Batman and Robin have no moving parts other than their heads, which you can pop off to reveal bottlecaps. Open each bottle and bubble bath comes out.

(I think my parents bought mine at the Collingwood Auction in New Jersey. They were empty but you could easily refill them with any brand. Sorry Colgate!)

Regardless of their intended use, they were real live, in-your-hands replicas of Batman and Robin. And not just a generic Batman and Robin, which would have been cool enough, but the Caped Crusaders as they appeared on the Batman TV show, which was my gateway to the world of comics and whatnot.

Batman’s costume is remarkably faithful to Adam West’s version, down to the bulky utility belt. His cowl is just the right shape, even if the eyeholes are inverted a la Win Mortimer. (Happens to look better, actually.)

Robin looks like Burt Ward but is a bit more nebulous than a dead ringer. What I like about him best is his color scheme: straight-up black and red. I’m an enormous fan of the classic red, green and yellow outfit but black and red works almost as well. (Nice detail: Batman is taller.)

Anyway, when it was bath time, I’d bang the two of them together as if they were having a Batfight (there were no villains so I made do), not caring in the least when the warm water turned cold and I got prune hands.

So I’m guessing I was probably the only boy on my block who didn’t mind taking a bath – because it was like a trip to Gotham City.

Even the “capes” hung correctly!