BATBOOK OF THE WEEK: Nightwing #1

Finally back in the mask …

It feels like DC’s been stalling for time but now they’re finally, completely, thoroughly ready to let Dick Grayson float through the air with the greatest of ease while wearing his mask and leotard.

We’ve basically gotten three farewells to Dick as Agent 37 — Grayson #20, Grayson Annual #3 and even Nightwing: Rebirth #1, which concluded the long goodbye. I was a big fan of Grayson the comic book but once DC made it clear that the erstwhile Robin the Boy Wonder was going to return to his Nightwing guise, I’ve been eager for them to get on with it. 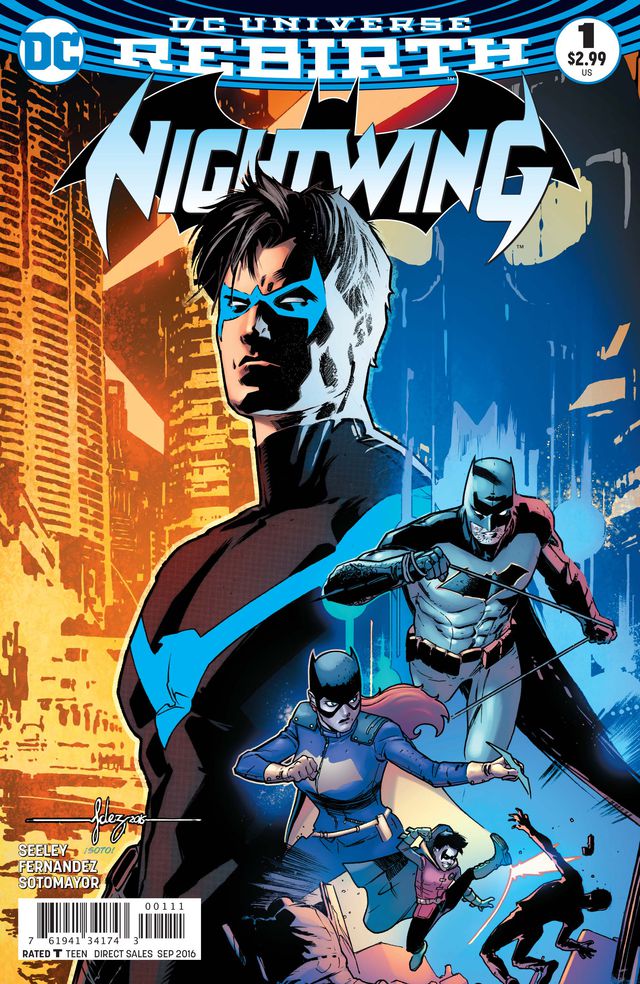 The story picks up the thread from last winter’s Robin War crossover, in which Grayson pledged himself to the Owls to prevent Damian from being brought into the fold. The Court of Owls has been (seemingly) surpassed by the Parliament of Owls, who prefer creepy black masks to creepy white ones and have put their hopes and dreams of finally controlling Gotham on Nightwing’s taut shoulders. Dick’s also getting a new frenemy: Raptor, whose mask looks like it was stolen from Hawk of Hawk and Dove fame (hmmm).

Really, I’m just glad things are getting going again. Tim Seeley did such a fine job on Grayson with Tom King, I imagine he’s got a bunch of tricks up his sleeve on this relaunched title, with art by Javi Fernandez and Chris Sotomayor.

Batgirl #1. I thought the Batgirl of Burnside run got off to a fun start before petering out. Barbara’s now hitting the road with a new creative team: Hope Larson and (at least for now) Rafael Albuquerque.

Titans #1. A de facto Batbook because of Nightwing’s central role, even if Wally West is the story right now. This is still the Rebirth title that interests me the most overall, other than Batman itself.

Detective Comics #937. Still reading this. Still not sold on it.