BATBOOK OF THE WEEK: Grayson #10

I keep expecting to get tired of it. But I don’t.

I was talking with my niece the other day. Well, not talking, exactly. Texting, actually.

She’s a big Nightwing fan and she wanted to know when and whether he’d be back. We both agreed it was an issue of when, not if. That’s not exactly a leap. 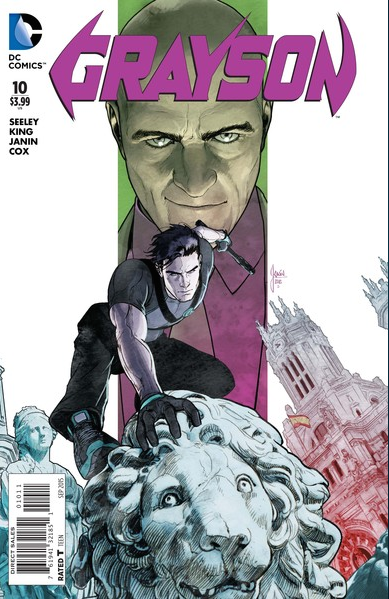 So long as Tim Seeley, Tom King, Mikel Janin and co. keep making comics this witty, sexy and subversive, they can keep Dick Grayson out of his tights. In a manner of speaking.

Every month, I expect to weary of the conceit of Grayson as superspy. I expect to start yearning for him to put his mask back on. And yet by the time I finish, I’m smiling and waiting for more.

ALSO ON THE BATSHELVES THIS WEEK: Harley “Harlequin” Quinn hits Gotham in Batman ’66 (preview here). There’s also Gotham By Midnight #7; Justice League: Gods and Monsters — Batman #1, an offshoot of Bruce Timm‘s forthcoming animated feature; and, We Are Robin #2. I really liked the first issue and think this series has a lot of potential.

It’s also a good week for trades: America vs. the Justice Society of America prominently features Earth-2 Batman; Batman: Gothic — Deluxe Edition is Grant Morrison‘s least-known Batwork; and, Legends of the Dark Knight: Norm Breyfogle is the latest in the hardcover series that spotlights great Bat-artists of the past.