BATBOOK OF THE WEEK — Convergence: The New Teen Titans #1

It’s not strictly a Batbook, but the original NTT was steeped in Batlore — and just happened to be DC‘s best book in the later years of the Bronze Age.

For about the first four years of its existence, The New Teen Titans was not only my favorite comic book, but also, it seemed, the favorite of every other DC fan at the time.

I was 13 when it burst on the scene, emerging from the ashes of DC‘s first two attempts at banding together the sidekicks of some of the company’s biggest guns. The original members were the spiritual progeny of Batman, the Flash and Aquaman, joined in short order by offshoots of Wonder Woman and Green Arrow. Since then, due in no small part to the immensely popular Teen Titans cartoons, those four additions have become mainstays of the DCU, with Cyborg even retconned as a charter member of the Justice League.

But The New Teen Titans, at its center, was a Robin book, which made it a Batbook. All the team members had their arcs and storylines but Robin‘s emotional journey was the through line. Dick Grayson started the title estranged from his mentor — a broken familial relationship that’s become a staple of the Bruce-Dick, er, dynamic but at the time it was daring and new. 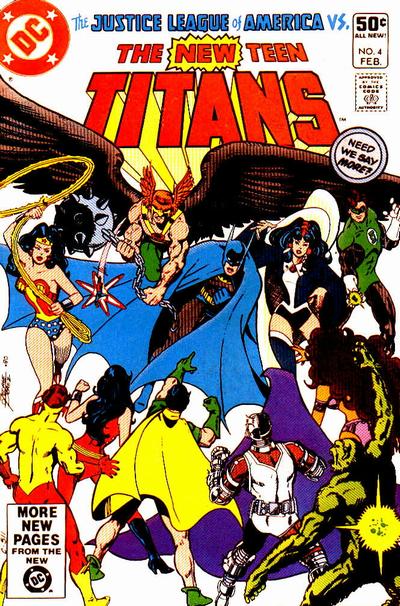 Over the course of 44 issues, not counting annuals, minis and the arrival of a parallel title, Dick anguished over his role as Batman‘s junior partner, had his first real adult relationship, became one of the DC Universe‘s most dependable leaders, gave up his Robin identity and became Nightwing. 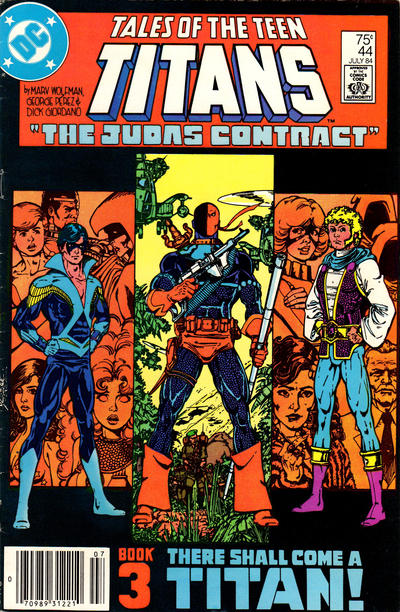 This is where Dick Grayson grew up.

It was Wolfman and Perez — the Titans team — that made all that happen. They drove that bus. 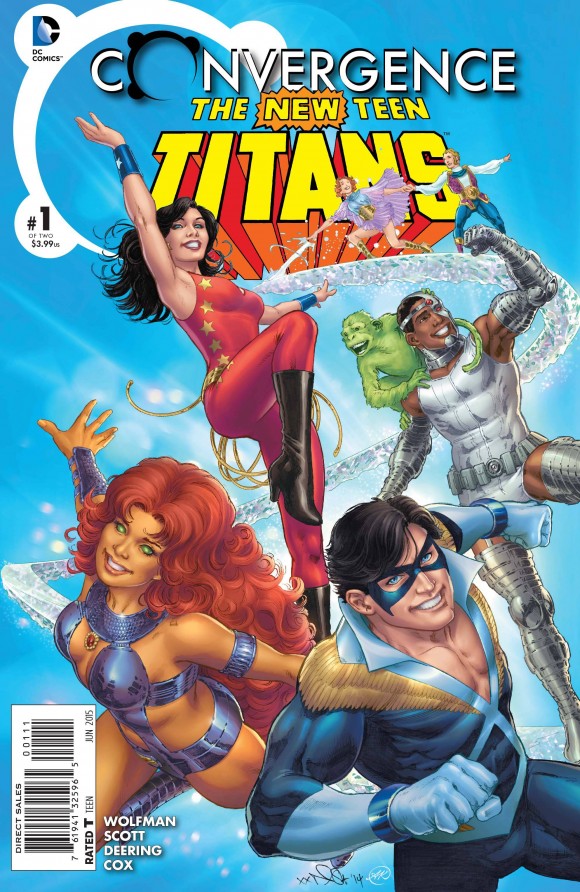 So the band is almost back together again in Convergence. The cover gives us Kole and Jericho, two regrettable additions to the team that, in my mind anyway, marked the series’ move toward eventual mediocrity.

But Marv Wolfman‘s here to write and while I of course would have loved a reunion with George Perez, Nicola Scott makes a fine sub.

ALSO ON THE BATSHELVES THIS WEEK: Convergence also brings us Batman and the Outsiders #1 by Andreyko and D’Anda (with a kinda-sorta Aparo-ish cover by Andy Kubert). Beyond that, there’s Batman ’66 #22, featuring the talents of Barr and Oeming, with Allred‘s best ’66 cover to date (preview here); the third Batman ’66 hardcover collection; and, Batman: Arkham Knight #3, which seems to have everyone whipped into a frenzy.