Batbook of the Week: BATMAN by NEAL ADAMS OMNIBUS

Fitting way to follow up NEAL ADAMS MONTH, no?

Neal Adams is certainly in the zeitgeist right now. We just completed NEAL ADAMS MONTH, with exclusive daily commentary by the artist and his collaborators on his DC Comics variant-cover project (click here for the full INDEX of stories). There’s also The Coming of the Supermen, Adams’ new mini.

This week, it’s the Batman by Neal Adams Omnibus, a $100 hardcover collection of every page and cover of the artist’s Batwork. In essence, it replaces the three-volume trade series that was published over the last 10 years and adds Batman: Odyssey to the mix.

Really, what can you say about a gigantic book dedicated to Batman’s greatest artist? That it’s, what, magnificent? Sure. That it contains work that redefined comics’ best character and laid the foundation for the nearly 50 years that followed? OK. That it contains not just gorgeous art but brilliant stories by Denny O’Neil and Len Wein and highly entertaining tales by Bob Haney? Yep. 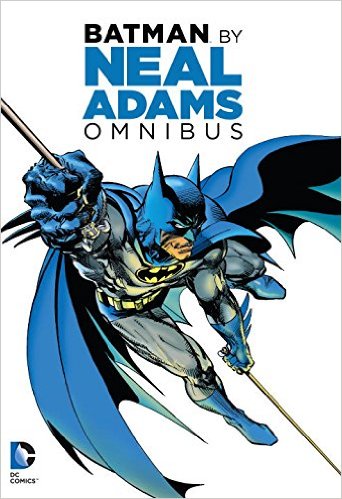 I think the only plaudit left unsaid is that this omnibus is hefty enough to fend off angry woodland creatures.

But still. Hundreds of pages of Neal Adams Batman. In one place. Yes.

ALSO ON THE BATSHELVES THIS WEEK: There’s another omnibus out this week — Batman and Superman in World’s Finest Silver Age Omnibus Vol. 1. I’m passing on it but I figured I’d mention it. I am picking up Detective Comics #50, Batman and Robin Eternal #23 and Catwoman #50. There’s also the Dark Knight III #3 hardcover collector’s edition, which I am getting because I am a sucker.