BATBOOK OF THE WEEK: Batman and Robin Eternal #1

Gotta at least see how this one goes …

Before Batman Eternal came out, I craved a Batman weekly comic.

I remembered the days when Batman and Detective crossed over every month and really enjoyed that long-form, soap-operaish storytelling. Batman was essentially a semi-monthly book.

Then Batman Eternal arrived last year and … I just didn’t like it all that much. It felt flabby and repetitive and derivative. Not enough there there.

So I did something I never do lightly: I quit a Batman book that “matters.” I didn’t miss it. I heard some good things as it headed toward the end so I picked up the last couple of issues. They were fine.

So here we are, with Batman and Robin Eternal, which promises a lot of Robin, past and present.

Robin’s getting a lot of attention these days, though, oddly, DC hasn’t been hitting us over the head that he’s 75 years old. I mean, where’s the Robin 75 variant-cover month?

I’m going to try Batman and Robin Eternal because that’s what I do. But man, why can’t I muster up any enthusiasm? 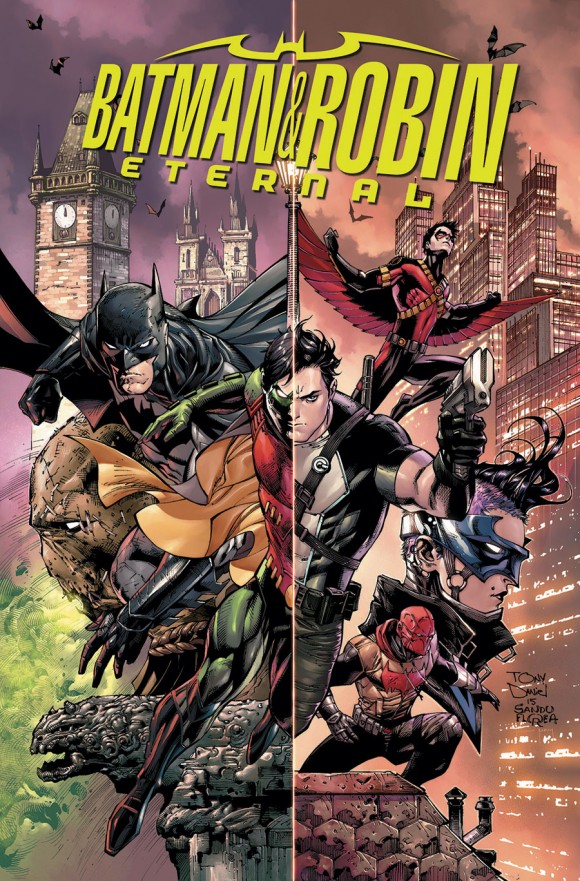 ALSO ON THE BATSHELVES THIS WEEK: Peter J. Tomasi returns to Gotham proper with Detective Comics #45. BatJim goes on an adventure with the Justice League! Fun!