BATBOOK of the WEEK: Batman ’66 Meets the Green Hornet #4

Batman ’66 bias or no, this is has been a wildly entertaining book — and a worthy successor to the Adam West Bat-mantle.

I’ve been a fan of the Batman ’66 title DC’s been putting out, though I’ve also been critical of a certain unevenness: Sometimes the story ideas and nods are better in concept than in execution. (Such as the recent episode — it’s hard to call them issues — when Batman and Robin had to deal with a certain TV show based on their lives.)

Anyway, the Batman ’66 Meets the Green Hornet miniseries by writers Kevin Smith and Ralph Garman — with my suspicions being that the latter is doing the real Bat-lifting — and artist Ty Templeton has been nothing short of hep, or hip, if you prefer. 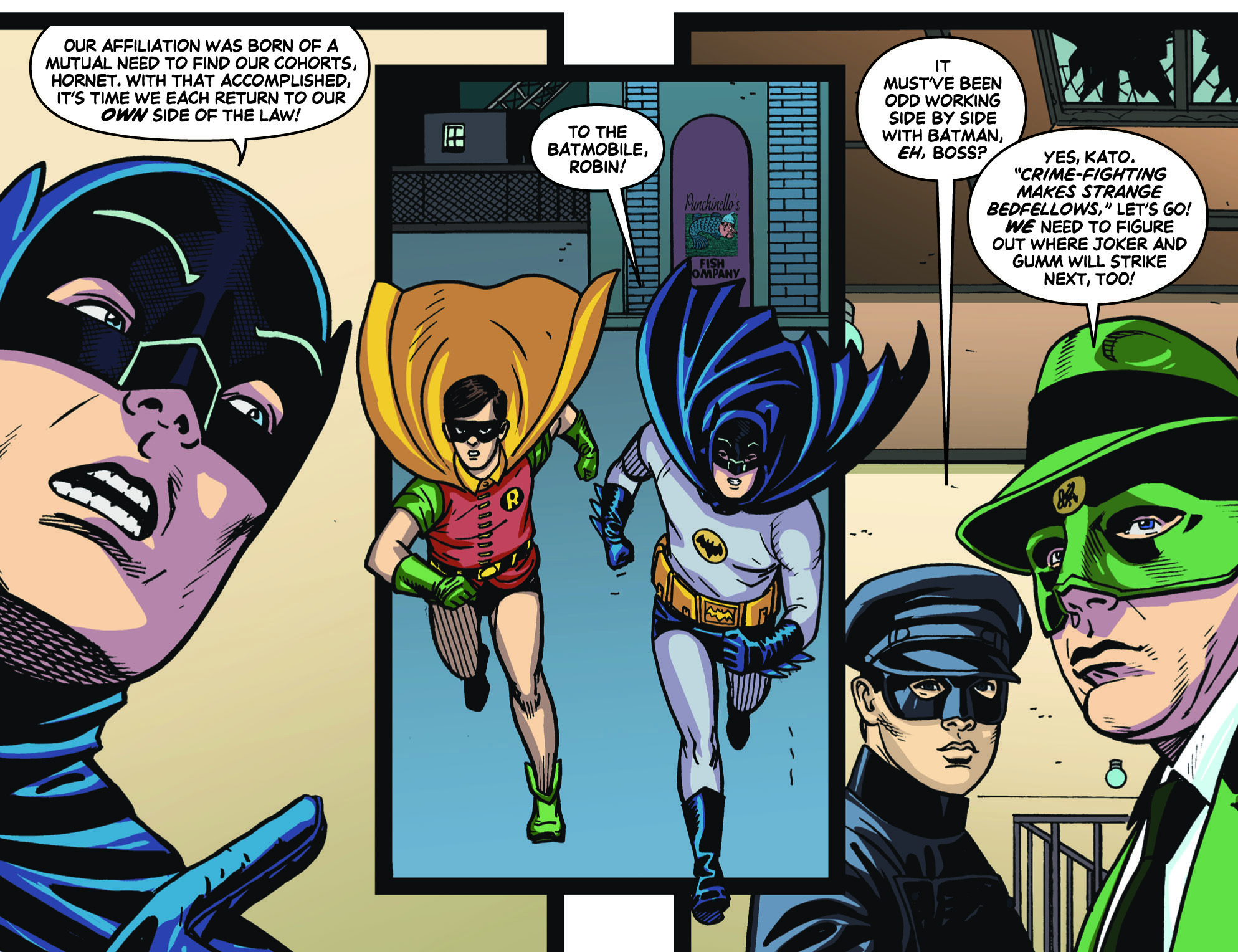 One of my fave Templeton panels, from an earlier issue.

Gleeps, it’s great! Garman/Smith captures the language, the cadence, the humor, the concepts just about perfectly and Templeton’s art is superb all the way around. I especially approve of the contrasting tenor of the two teams at work and in competition with one another.

So the new print edition comes out 9/3, with another great Alex Ross cover. I will be sad when this one’s over. But I’m still hoping DC goes all in with a sequel to the ’66 movie one of these days. Because this would be the perfect team to handle it.

(P.S. If you want a preview of this week’s regular digital-first Batman ’66 #42, we have you covered here.)

Also on the Batshelves this week: DC’s in feet first with its Futures End September stunt. Unlike the New 52 launch, the Zero Month and the Villains Month of the last three years, I’m not so enthusiastic. Still, I’ll read my Batbooks, which this week means Batman Eternal #22 (not a FE tie-in, by the way); Grayson; and Justice League #33 (delayed, so also not a FE tie-in). Plus, there’s the JLA Earth 2 New Edition TP from Morrison and Quitely. I have to mention it because I’m a Multiverse freak.

But of em all, I most dig the Futures End Detective issue, if only because it brings us this cover tribute: