BATBOOK OF THE WEEK: Batman #50

It’s all coming to a head.

Scott Snyder and Greg Capullo’s 4 1/2-year run on Batman hits the climax as Bruce returns, a Bat in full.

Mr. Bloom hasn’t been the most compelling of villains, so it’s weird that he’s the one these guys are going to go out on — though I’m guessing there’ll be some Joker action tucked in there too. I also imagine there’ll be some fun Batman and BatJim interplay and torch-returning, as well.

Next month, it’s Snyder and Capullo’s epilogue and then DC’s next big transition gets under way — and we’re expected to learn a lot more about that this weekend when the publisher unveils its new creative slates at WonderCon in Southern Californiyay. I’d expect some leaks before then.

The word on Snyder is that instead of Detective, which had been widely reported, he’ll be doing a separate, villain-focused Batbook down the line. I’m down with that, obviously. 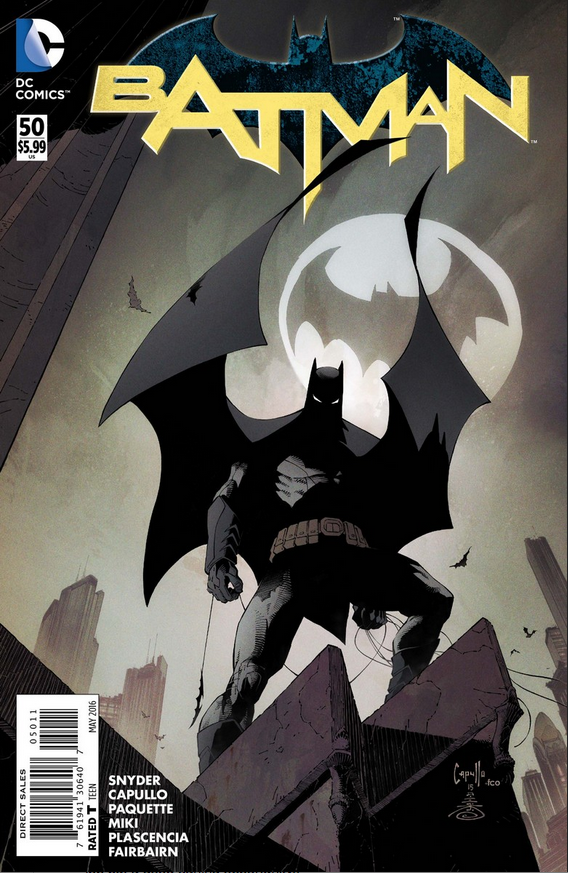 ALSO ON THE BATSHELVES THIS WEEK: This is a big Batweek and there are a number of Batbooks that would, in any other week, make a strong case for being the top pick:

— Batman and Robin Eternal #25 is soooo close to the end.

— Grayson #18 promises a lot of answers.

— Eaglemoss has four Batman Automobilia issues hitting stores at the same time. The two for me? Issues #82 and #83 — the Penguin Batmobile and Black Widow’s motorcycle (!), both from Batman ’66.

— Aaaaaaand, make sure you check out our BATMAN/SUPERMAN WEEK coverage. Cuz there’s a movie coming out and all … (Click here.)