BATBOOK OF THE WEEK: Bat-Mite #3

When I say I don’t like Bat-Mite, I don’t mean it in that way that self-serious readers (like I used to be) do: There’s a whole host of fans who detest him simply as representative of the worst period of Batman‘s history.

No, taken strictly on his own terms, Bat-Mite just isn’t charming. He’s a pain in the ass, and not in a good way. The Brave and the Bold cartoon episodes featuring Bat-Mite — the first of which threw a shot at said self-serious readers — were among the very best in that series. But that was despite his appearance, not because of the misguided imp (or Paul Reubens‘ shrill performance).

Rather, it’s what the modern Bat-Mite wreaks that’s so entertaining. He’s a catalyst for commentary on comics or at the very least a celebration of the oddball and the innocent. 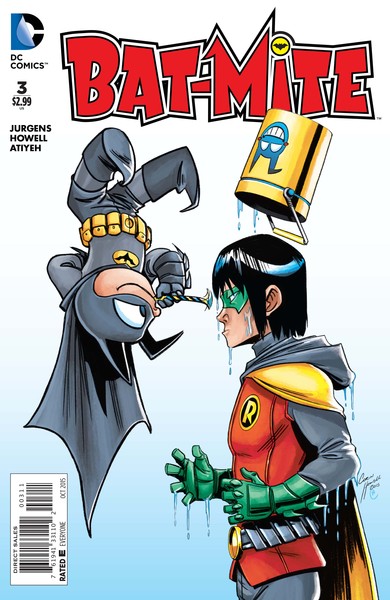 That should be fun.

ALSO ON THE BATSHELVES THIS WEEK: Kinda light, but there is Detective Comics #43, which has stood ear-to-ear with the main Batman title. Oh, and you gotta check out the latest from Eaglemoss’ Batman Automobilia collection: Robin‘s 1970s motorcycle. I will be making room for that on my shelf.