Over at the original blog, I was proud to be the first dude in America to get his hands on the first wave of Mattel’s Batman 1966 action figures. They’re out now but I still have to share:

Seriously, I love comics. But I also love comics stuff, hence this column.

Anyway, like many of you, my earliest superhero memories go back to the Adam West “Batman” TV show. Without hyperbole, that show is directly responsible for me sitting here right now, writing this.

Cutting to the Batchase, I loved my Megos when I was a kid but I would have given just about anything to have had these, which were sent over by the fine folks at Mattel.

The figs go for anywhere from about $16 to $22 each, depending on where you get them or which website you go to. There’s also a spectacular Batmobile, a Batusi Batman set, a Batman and Robin set, plus the Joker and Surf’s Up Batman! Catwoman, due out in October, will round out the set.

The likenesses are uncanny! Each comes with a card featuring the character on one side and part of a Batcave diorama on the back. And their stands feature the brightly colored sound effects, such as “Pow!” “Kapow!” and “Awk!” 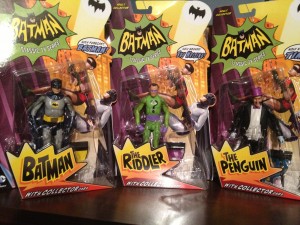 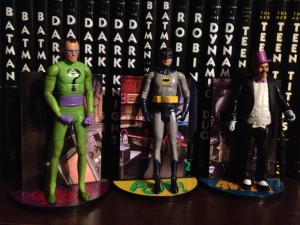 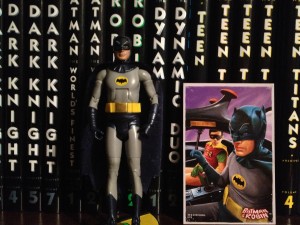 Mattel has yet to announce any more, so I have a hunch that what we see is what we’ll get.