AW YEAH! Franco Will Teach Your Kid to Draw!

Home » CONVENTIONS AND EVENTS » AW YEAH! Franco Will Teach Your Kid to Draw!

The co-creator of Tiny Titans and his partners have a new shop in New York — and there’s an art class 8/29! 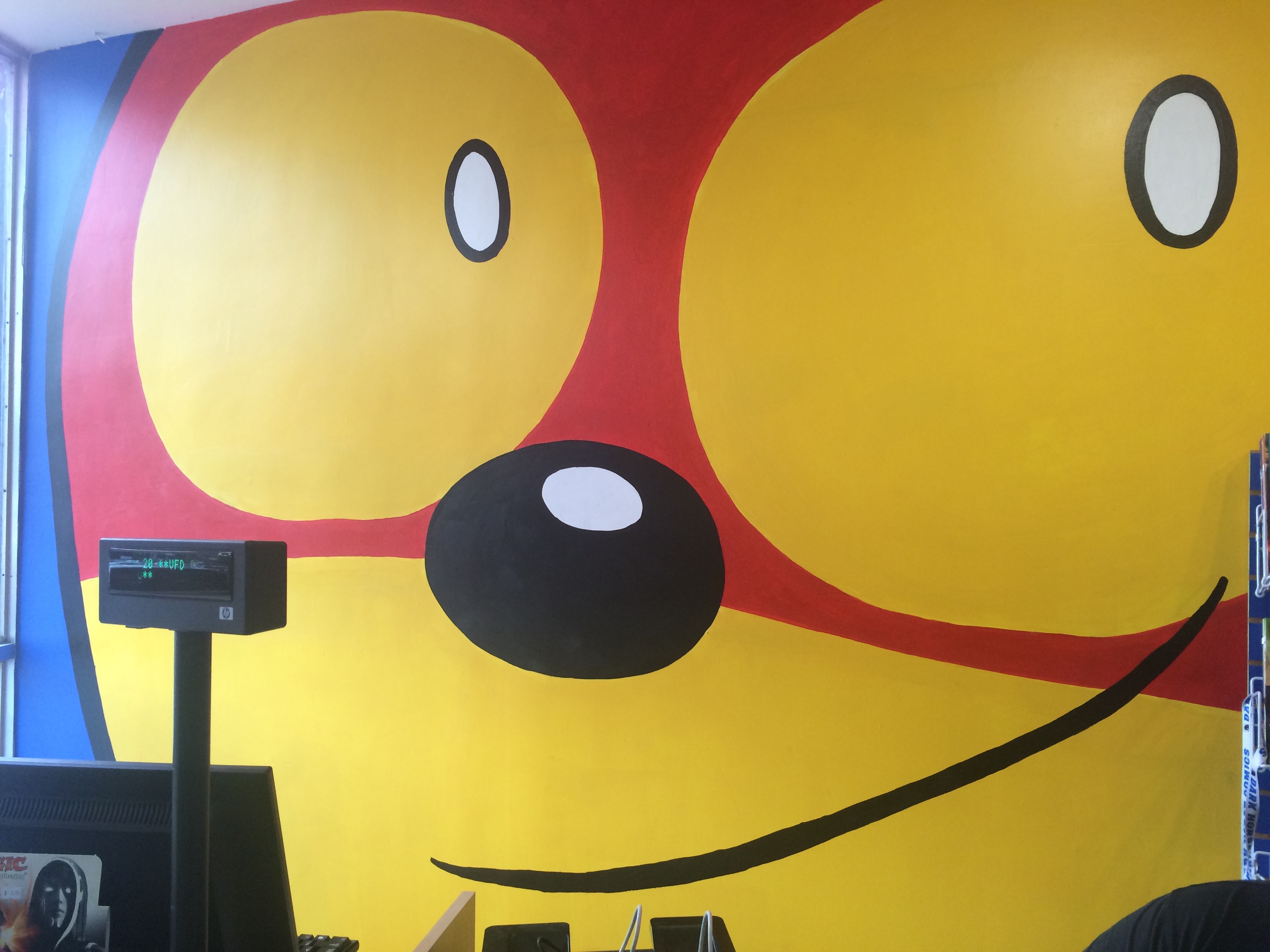 Those partners, by the way, include Art Baltazar, Mark Waid and Christina Blanch. And the new operation in suburban NYC is run by Marc Hammond.

I stopped by Aw Yeah Comics in Harrison, N.Y., last week to pay Marc and Franco a visit. It’s easy for me because I live one town over and I’m lucky that such a rad new store is a mere 15 minutes or so from my house.

The good thing for the rest of the area is that there’s commuter rail right across the street — so New Yorkers who want to meet Franco, who hits the store a few days a week, and talk Aw Yeah Comics! or Itty Bitty Hellboy or his own Dino-Mike can do it in a snap.

Bottom line is the comics pros who’ve opened shops in Skokie, Ill., and Muncie, Ind., have now put down roots on the doorstep of NYC. 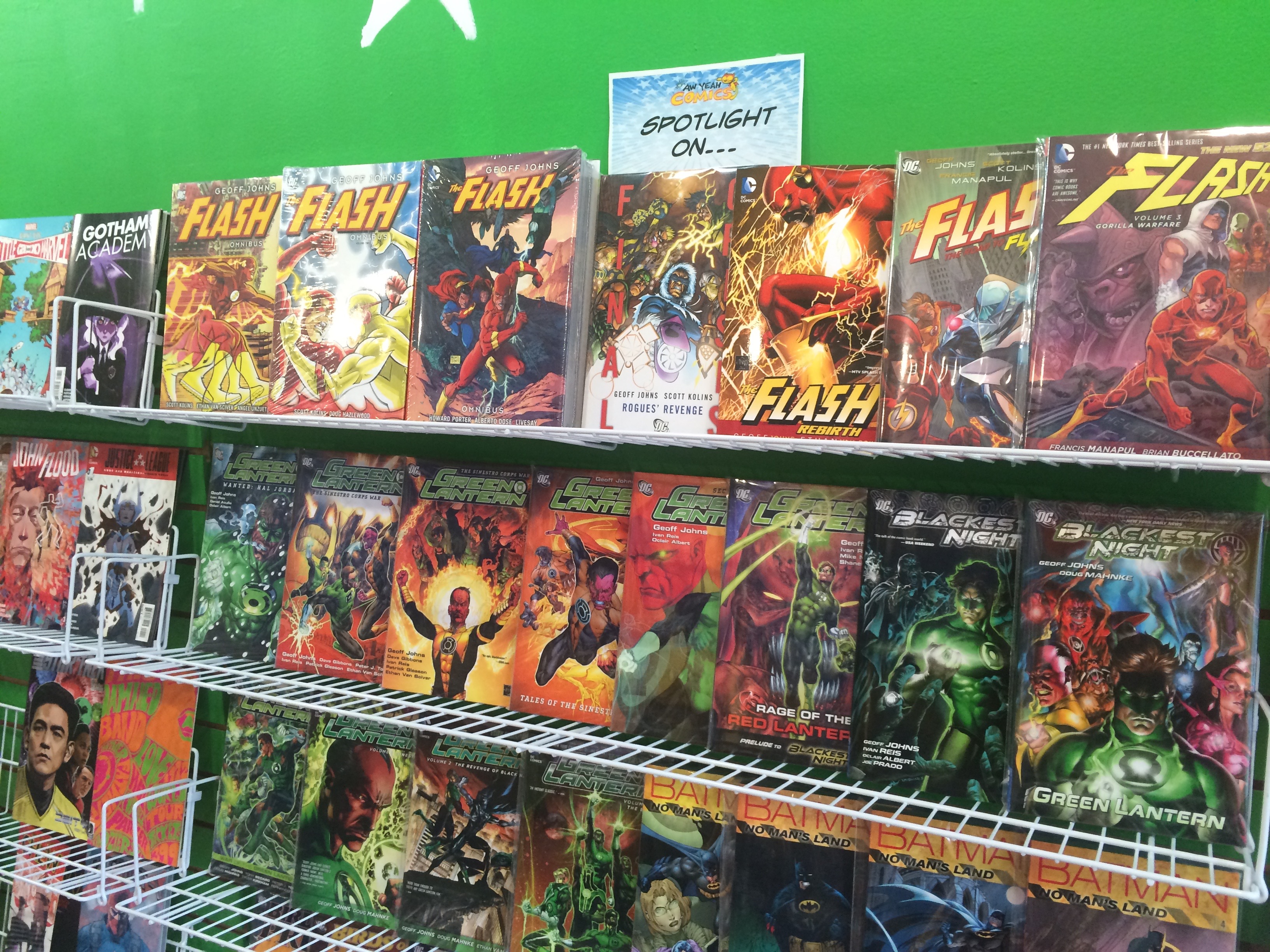 “I live relatively close to here,” Franco said, sketching in a glass-fronted studio that will allow fans to watch him work.

“And I was jealous because we opened up a place in Skokie, right outside Chicago, and my buddy Art lives out there. And we re-branded the store in Muncie, and Mark Waid lives about 15 minutes from that store. I got a little jealous that I didn’t have one by me,” he added with a laugh.

A New York store has actually been in their plans for awhile but now was the time, in part because a popular longtime shop nearby closed recently. Aw Yeah basically had a soft opening but the big splash will come Oct. 3, close to New York Comic Con.

They’ve got a bright, cheerful, bold-color thing going, with shelves stocked not just with new releases and staff picks, but racks and racks of comics that are great for younger kids. 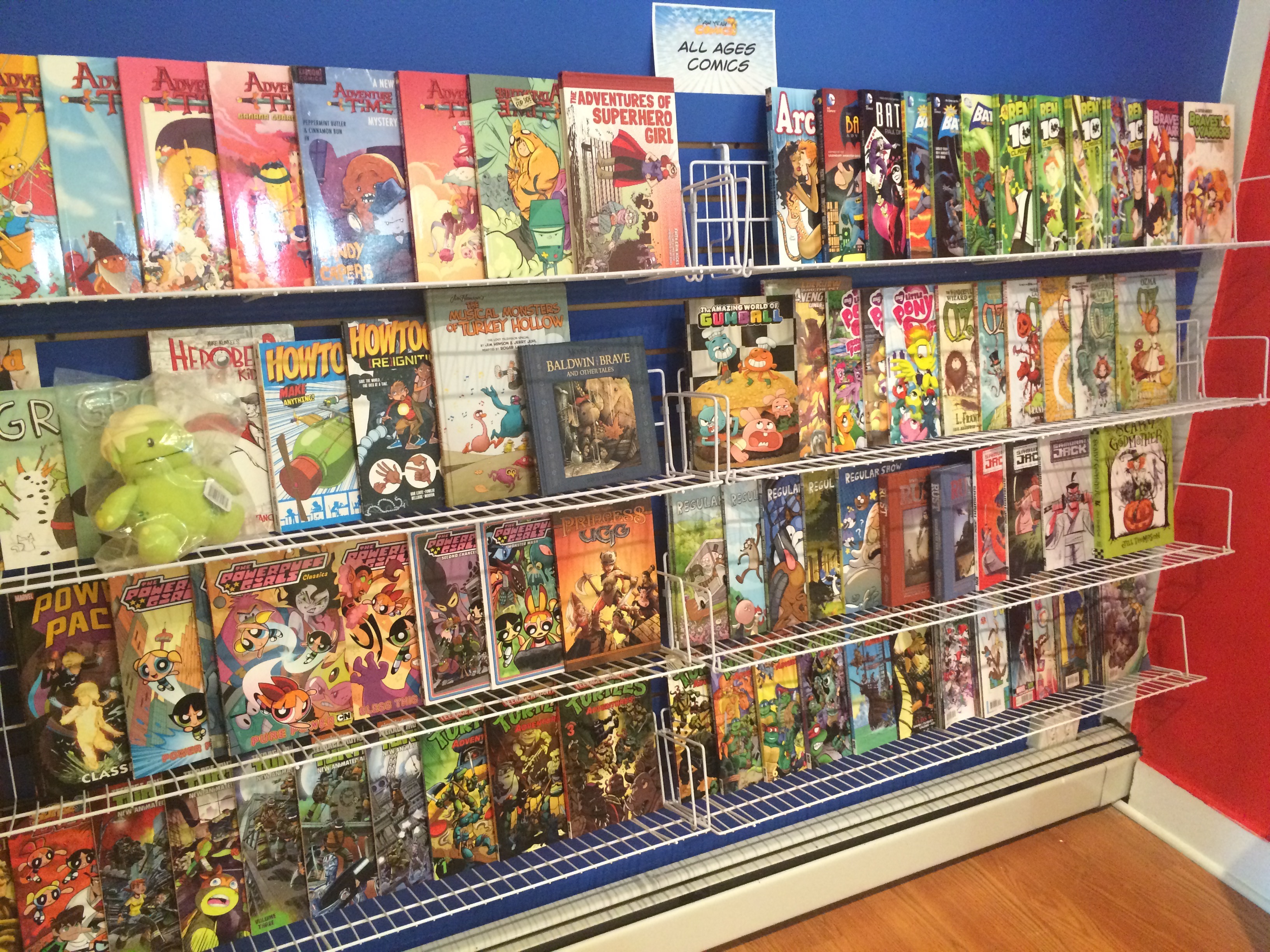 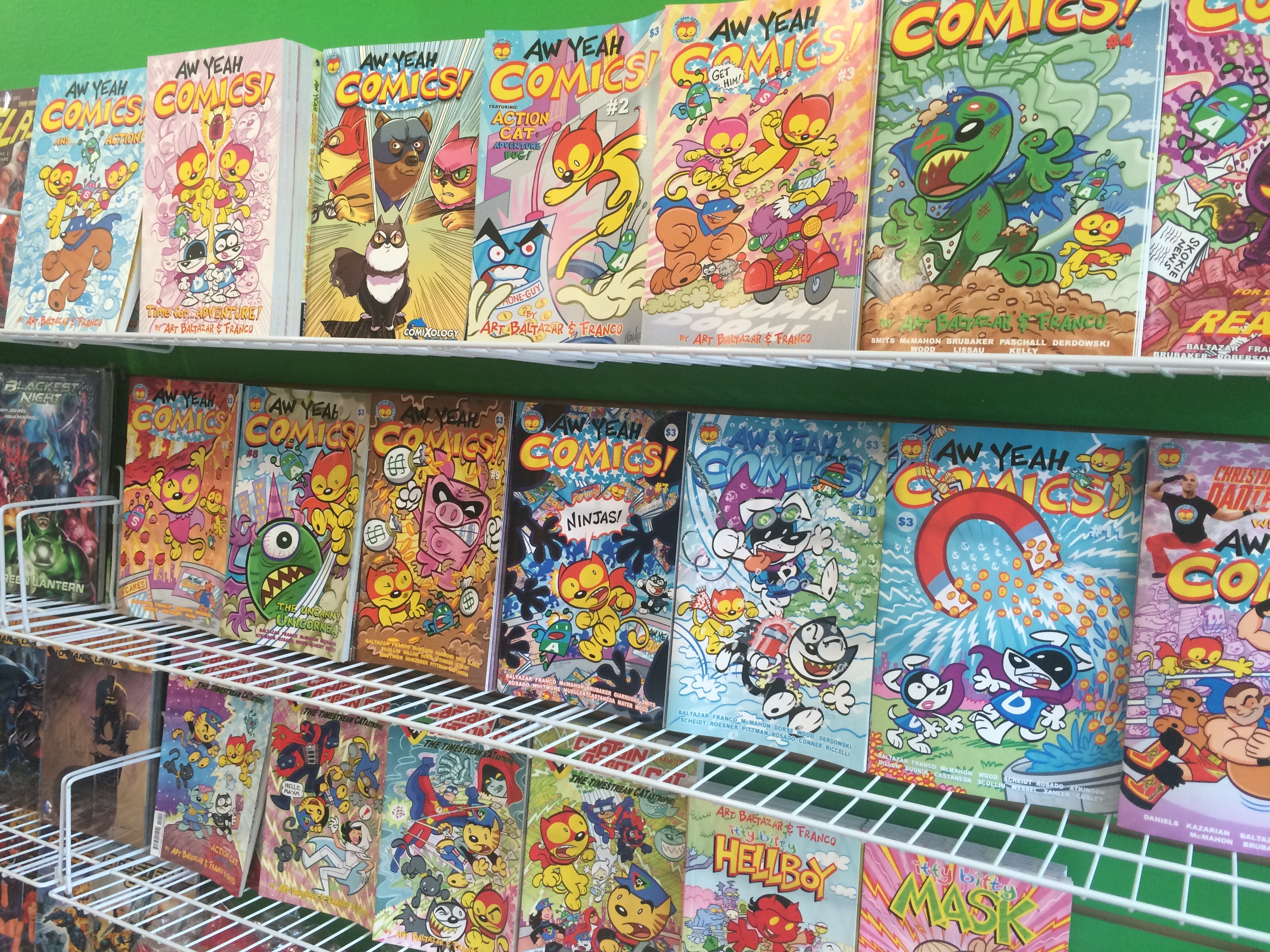 I’m extremely spoiled with the number of excellent comics shops in and around New York City but this is the most kid-friendly of them all. Perfect for the area.

Marc and Franco — who actually has a last name (Aureliani) — have some ideas about how to make the place special, with an eye toward bringing fans in from the whole region, starting with next week’s art lesson: It’ll be 8/29 from 10 a.m. to 11 a.m. $15 per kid, ages 6 to 16 (under 13 accompanied by an adult please, they ask). They’ll provide paper, pencils and crayons. (More details here and here.)

They’re billing it as their first Saturday Morning Cartooning Class. Turns out, teaching is second-nature to Franco. Not only is he an Eisner winner, he’s a high school art teacher farther north, in Putnam County.

There are also going to be plenty of events for the grown-ups as time goes on, like artists roundtables. And they’re planning small comics festivals that will draw pros from the New York scene — sort of a smaller-scale artist’s alley. In addition, there will be art shows, with Franco already displaying some of his own paintings on a portable wall. 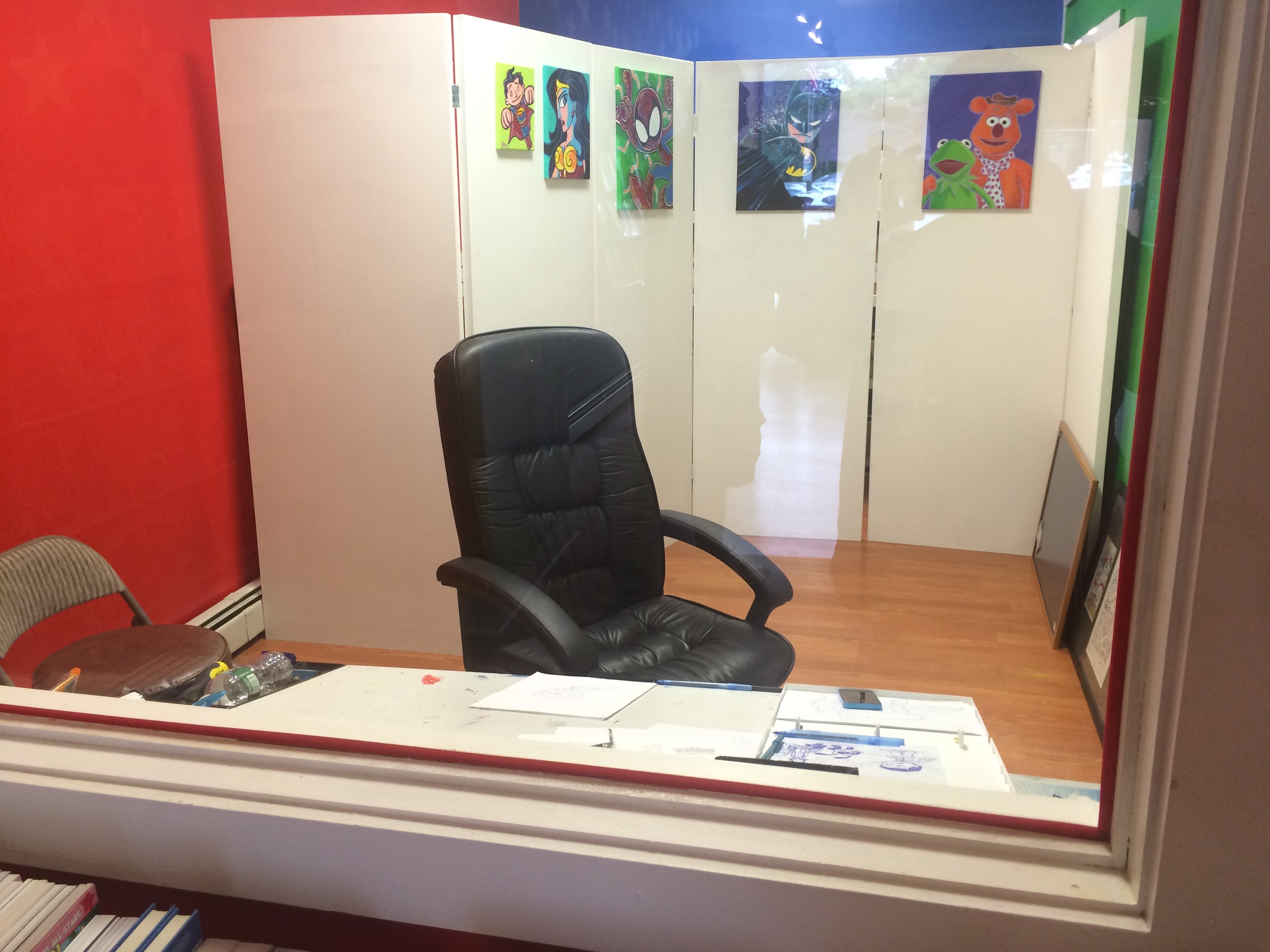 “What we’ve had happen at the other stores is, it really builds,” Franco said. “Y’know, comics stores in the nature of themselves, really build a kind of community. But we’re a little bit more far-reaching because we want to build a family community.”