ATTENTION ALL PERSONNEL: Dig These 13 Times M*A*S*H Crossed Over With Comic Books 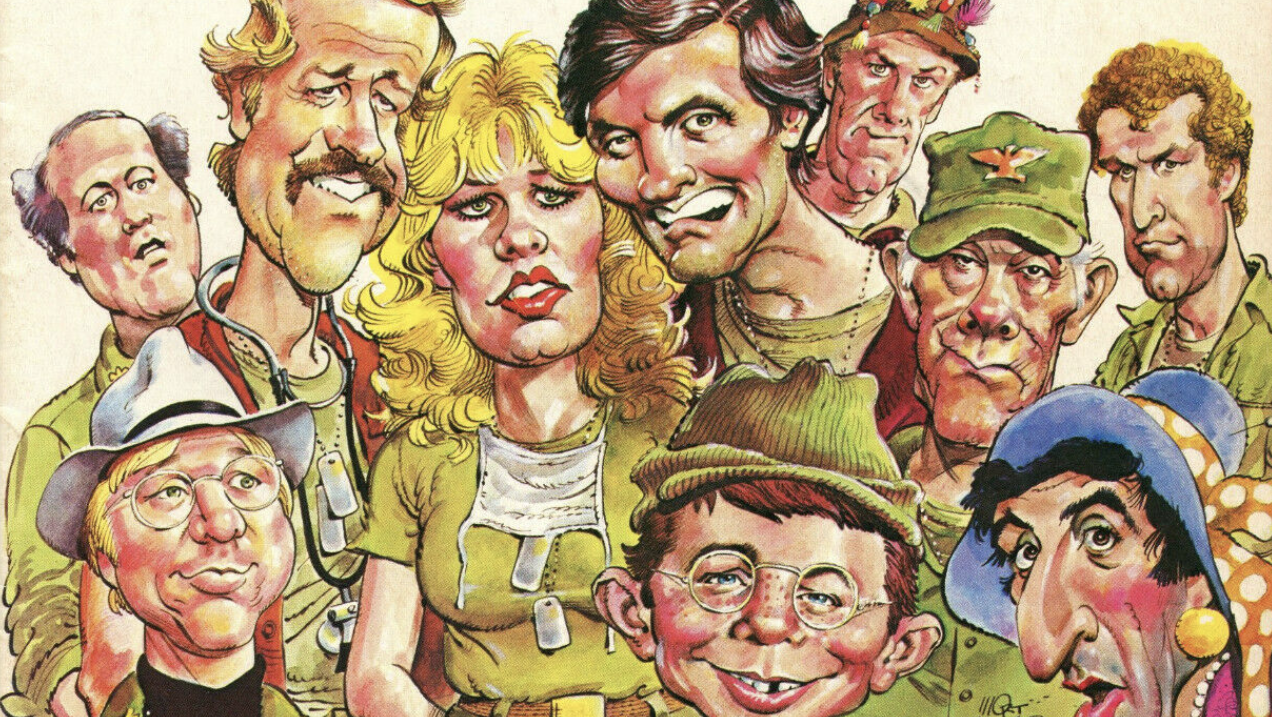 Our old pal and REEL RETRO CINEMA columnist Rob Kelly is back! Only this time, he’s turning his eye to one of the greatest shows of all time — M*A*S*H — and its comics connections. M*A*S*H, as you may know, is a particular interest of Rob’s (and mine!) and this week marked the launch of Season 5 of his superb podcast, M*A*S*HCast. I’m even the guest, discussing the two-parter “Bug Out.” Click here for a listen or check it out wherever you get your podcasts. In the meantime, dig this look at the landmark show and its connections to the world of comics. Company, fall in! — Dan

The show remained at the bottom of the ratings for the entire first season, and was on the verge of being cancelled. But the wife of the network president loved M*A*S*H and bugged her husband to give it another chance. He did just that, moving the show to Saturday nights, which was then filled with blockbuster hits like All in the Family and The Mary Tyler Moore Show. America got to see just how good M*A*S*H was, and it took off, becoming one of the most popular TV shows in history, running 11 seasons. Its final episode, which aired Feb. 28, 1983, still holds the record as the highest-rated scripted TV episode in history. (Only Super Bowls have fared better.)

I discovered M*A*S*H via reruns, which allowed me to explore the show’s deep history, while also keeping up with its current incarnation during its final few years. I loved it from the start, with its perfect mix of warmth, intelligence, and irreverent humor. If there was anything I loved more than M*A*S*H, though, it was comic books, which I clocked more hours reading than I did TV watching. So during the rare moments the two things overlapped, I was elated—everything I love all in one place!

So to commemorate the show’s 50th birthday this year, and the start of the fifth season of my M*A*S*HCast podcast (on which 13th Dimension Chief Surgeon Dan Greenfield is a regular guest), I present 13 times when comic books made it all the way to a Mobile Army Surgical Hospital in South Korea:

Der Tag (Season 4, Episode 17). M*A*S*H, running eight years longer than the Korean War, played fast and loose with chronology. Once in a while props or references popped up that could not have happened when the show supposedly took place. The ultimate example of this is in this episode, where avid comic book fan Radar O’Reilly can be seen asleep with some comics on his lap, including an issue of Marvel’s The Avengers, which of course did not exist for another decade. 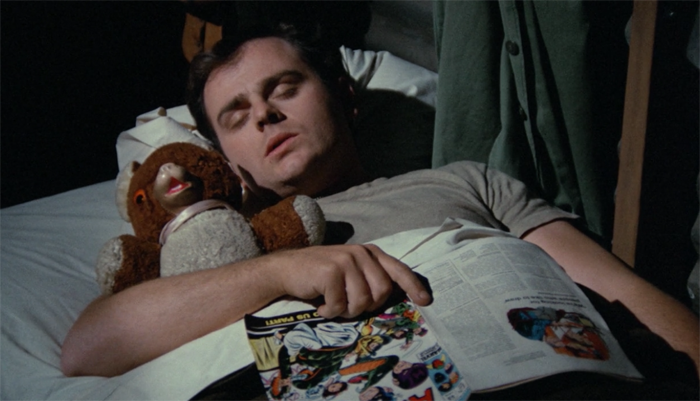 This issue, #60, is from 1968 (another issue, #72, is seen in an earlier shot). The only explanation I can come up with is the producers sent someone to the 20th Century Fox prop department to get some comics, and these were what was lying around. If the comics had been bought new, they’d be from 1975. I wonder what Capt. Hawkeye Pierce thought of his namesake?

Hawkeye (Season 4, Episode 18). Speaking of Hawkeye, in this episode, our hero finds himself wounded and stranded with a Korean family who, of course, don’t speak English. After being rescued, Hawkeye returns his hosts’ hospitality by bringing gifts to everyone, including some comics and candy for the kids. He admonishes the kids, however, that it might be healthier to “Eat the comics and read the candy.” The Novocaine Mutiny (Season 4, Episode 20). That same issue of The Avengers (#72) pops up again in Season 4, along with some other comics, including 1969’s The Amazing Spider-Man #81! Dr. Winchester and Mr. Hyde (Season 6, Episode 23). GIs were a huge chunk of the audience for comic books during World War II and the Korean War. In this episode, some GIs discuss an issue of Superman one of them is reading, and says “It’s the one where Lois Lane gets kidnapped?” to which Radar responds, “Lois Lane gets kidnapped in every one.” Tuttle (Season 1, Episode 15). Starting as early as the first season, we see that Radar had access to some magical, time-defying newsstand. In this episode, he’s seen reading an issue of Marvel’s Captain Savage and His Battlefield Raiders, published in 1969. Tuttle (Season 1, Episode 15). Radar was forever talking to “Sparky,” a company clerk at I Corps who helped him patch through calls. Despite dozens of references, Sparky was never seen, except for once, in the same episode as above. Played by actor Dennis Fimple (Maverick, King Kong, House of 1000 Corpses), Sparky thanks Radar for sending him a Captain Marvel comic, which he is seen reading (though to my eyes that doesn’t look like a 1950s Captain Marvel). Springtime (Season 3, Episode 6). Proving that Radar isn’t just a Marvel Zombie, in this episode Col. Blake makes reference to the Archie Annual that just arrived for him. It’s not a good time, though, since Radar is trying to woo a comely nurse and doesn’t want her to know he reads kiddie stuff like comic books. I think we’ve all been there, haven’t we? Run for the Money (Season 11, Episode 9). In this touching episode, Dr. Winchster befriends a wounded soldier who is made fun of by his fellow GIs because he stutters. The soldier reads comic books, leading to a scene where Winchester reveals he does, too! There’s also a reference to the Classics Illustrated adaptation of Moby Dick. I remember watching this episode when it aired for the first time in 1982, and I cannot tell you the impact it had on me. The show does take a slightly negative view of the medium (comparing them unfavorably to actual “literature”), but it didn’t matter. Just hearing that someone as bright and cultured as Dr. Charles Emerson Winchester III read comics felt like the ultimate seal of approval.

Trick or Treatment (Season 11, Episode 2). Everyone dresses up for Halloween, and Hawkeye goes as Superman. Sure, the cape is just an Army blanket, but man that S shield is pretty darn comic accurate! Mad Magazine. M*A*S*H was such a cultural institution for so long that of course it was ripe for parody. Mad did numerous take-offs, featuring the kind of jokes you’d come to expect from the Usual Gang of Idiots. To my mind, though, Mad always went a little easy on the show—I think that was because Mad knew, as everyone did, that M*A*S*H was pretty damn good. 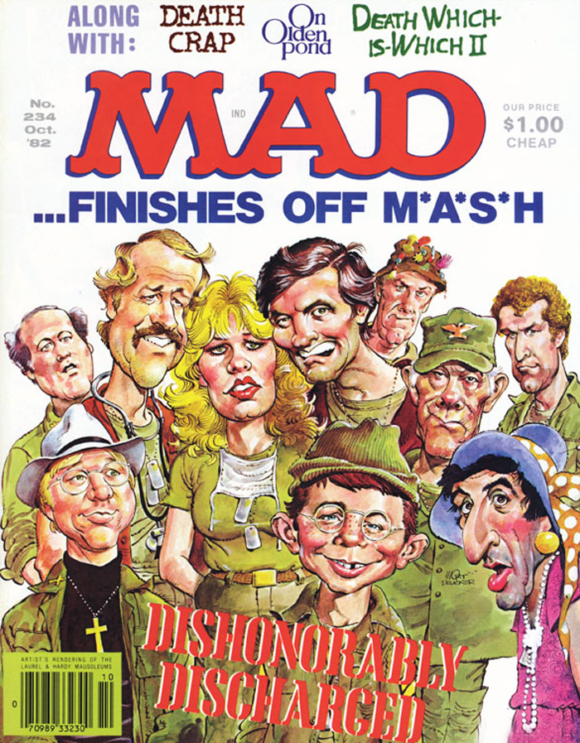 Sgt. Rock #381. Completely out of nowhere (and several months after the show went off the air), DC ran a three-page parody called “S*M*A*S*H” in this issue of Sgt. Rock. Written and drawn by Ed Burdett, whose sole comic credit this is, I can only guess this was commissioned for Mad (or Cracked, which also did M*A*S*H parodies) and it somehow found its way to editor Joe Kubert’s desk. I searched subsequent issues to see if anyone commented on it in a letter, hoping that would inspire Kubert to explain where it came from. No luck. “The Toughest Ticket.” One of the most confounding ads to ever run in a comic book, this one-page PSA for the Veteran’s Bedside Network ran in DC Comics for a few months in 1984. Drawn by the legendary Joe Kubert (him again!), the thing that caught this M*A*S*H fan’s eye was Panel 5, which shows some veterans recording their own version of an episode of M*A*S*H! Completely intrigued by the idea of there being essentially radio versions of the show, I have tried for years to dig up more information about these, but have come up short. 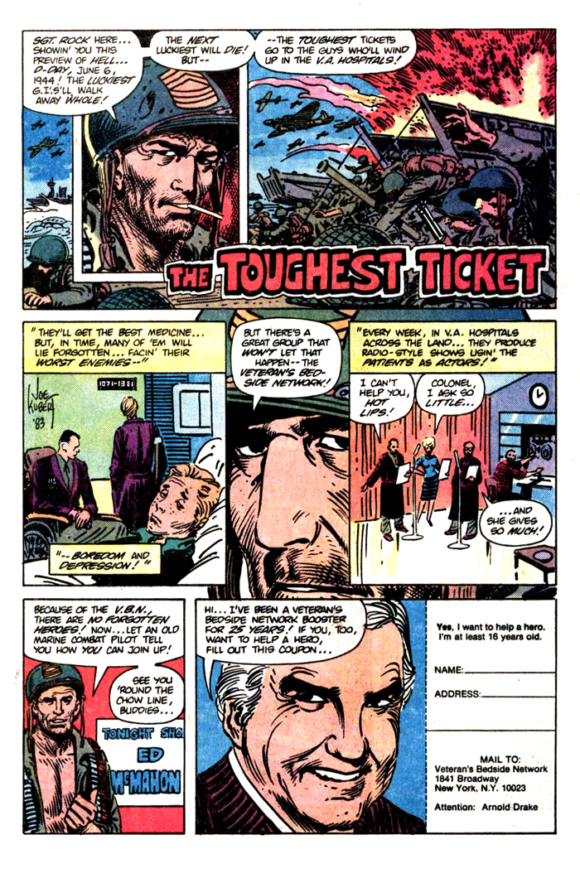 (The dialogue quoted in the panel is from a Season 6 episode, “The Last Laugh”—Rascally Rob)

M*A*S*H: The Comic. For our final example, a bunch of years ago I was inspired by all the TV-to-comic book adaptations in the ’70s and ’80s (Welcome Back Kotter, Battlestar Galactica, The A-Team) to come up with my own M*A*S*H comic book cover. For this, I imagined what if DC had acquired the license, and that they had decided to fold it in with their robust line of war comics? I think it might have gone something like this… UPDATED 3/11/22: A number of readers noted that we left out comics writer Larry Hama’s appearance on the show. We plead guilty — it was an oversight! So here’s a pic from Hama’s appearance in the Season 5 episode “The Korean Surgeon.” — Dan M*A*S*H airs nightly on the MeTV network, and is available on Hulu. And if you’re a fan like me, please join us for M*A*S*HCast where I am accompanied by Dan Greenfield to kick off Season 5! — Rob

Rob Kelly is a podcaster, writer, and artist. He is the host/co-host of several shows on The Fire and Water Podcast Network, including Superman Movie Minute, Fade Out, TreasuryCast, Pod Dylan and, most importantly, M*A*S*HCast.