A birthday salute by the team writing his latest adventure…

The late Adam West would have been 90 today and we’re celebrating with a series of features spotlighting the greatest Caped Crusader. (Click here for the full rundown.)

Now, Batman ’66 has been off the air for more than 50 years now but the adventures continue in the latest comic-book crossover, Archie Meets Batman ’66. The next issue is out 9/26 and you can click here for a SNEAK PEEK.

The six-issue miniseries is written by Jeff Parker — who’s scripted most of the Batman ’66 comics — and Michael Moreci.

As the writers who are still feeding Adam West his lines, as it were, we invited them to offer their tributes: 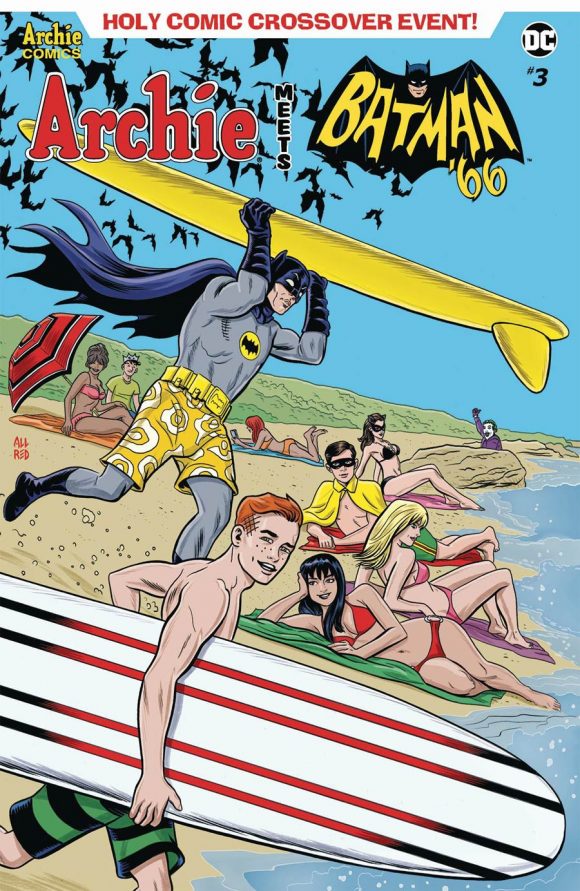 “By all accounts, Adam was a wonderful human being who possessed a great sense of humor and a remarkable heart. I grew up on his Batman, and he made the hero’s code of goodness so effortless. I’ll never forget the impact he’s had on my life.” — Michael Moreci

“Adam was the right hero for the right time. If you consider the news of 1966, the strife in the U.S., you’d expect no welcome for a character who believes so wholeheartedly in justice and human potential for change, even in what was ostensibly a children’s show. But West brought that very particular sense of humor and sincerity that hit the exact right tone to be the foundation for an extremely cool moment in pop culture. His voice was hypnotic, and he knew how to share a scene. He wasn’t merely doing camp, that’s why others couldn’t replicate it. He was allowing you to relax and enjoy over-the-top adventure with him.

“I was lucky as a kid to meet him at a signing, which was a thrill. Then I later saw him incognito walking around with a lovely lady friend, but knowing who it was without the cowl I was probably staring slack-jawed. He noticed me, and winked and smiled as if rewarding me for being such an observant young man. The guy was simply charming, on stage and off.” — Jeff Parker