APES WEEK: Unpublished on the Planet of the Apes — Boom!

Home » APES WEEK: Unpublished on the Planet of the Apes — Boom! 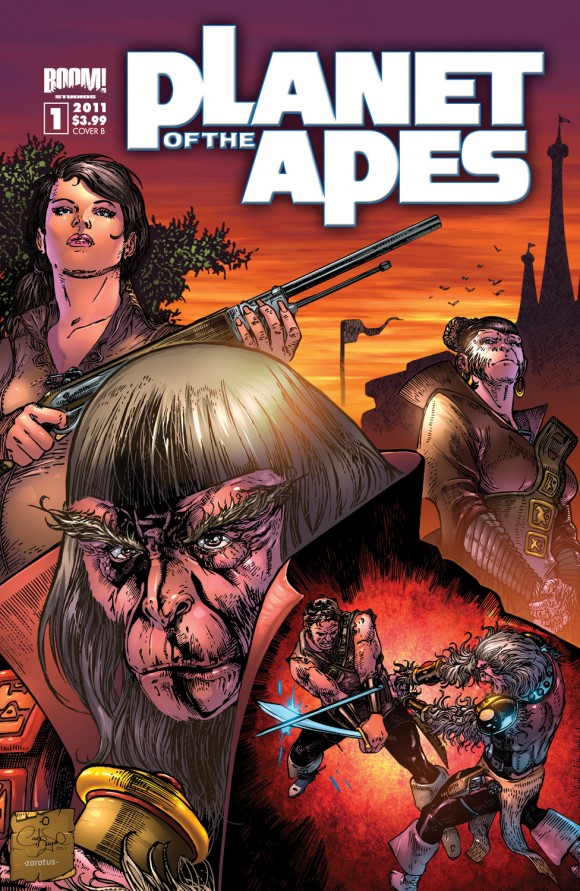 Planet of the Apes monthly series

In 2011, Boom! entered the arena with the launch of a new monthly comic series simply titled Planet of the Apes, written by Daryl Gregory and illustrated by Carlos Magno. The storyline, set shortly after the book-end Lawgiver scenes from “Battle for the Planet of the Apes,” (approximately 600 years after the time of Caesar), explored a civil war between the granddaughters of the Lawgiver: Alaya (a chimpanzee) and Sullivan (her adopted human sister).

The saga featured a large cast of supporting characters, including General Nix (a disgraced but honorable albino gorilla), a human mutant known as Brother Kale, a sexually deviant and entirely bald gorilla tyrant called the Golden Khan, a one-armed human fighter known as Casimir, a chimp attendant named Hulss and many others. The sprawling epic was arguably the most ambitious ever told in the pages of a Planet of the Apes comic line. 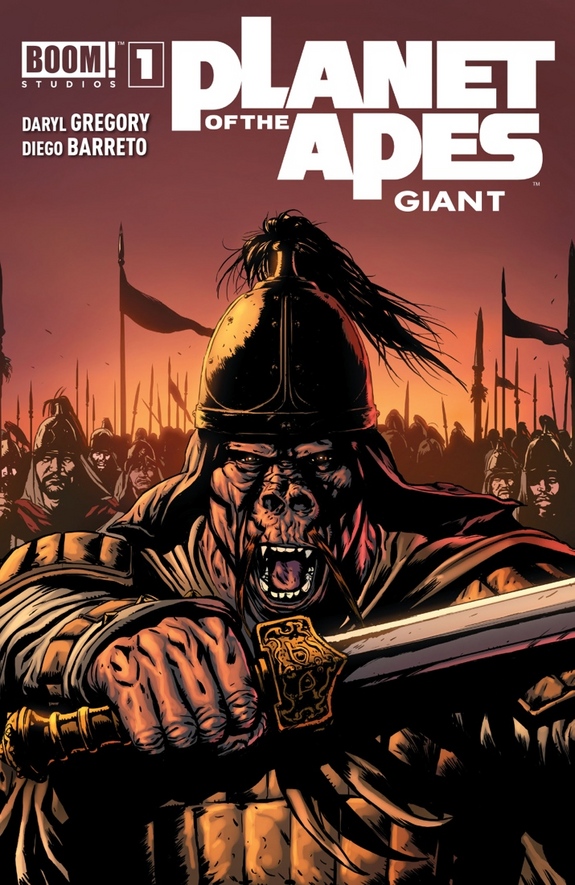 Gregory also penned an online prequel comic to “Rise of the Planet of the Apes,” setting up the film’s premise. The story introduced a pair of wild African chimps, Alpha and Bright Eyes, that were captured by poachers and sold into captivity, with Bright Eyes slated for scientific experiments at Gen-Sys Laboratories. As seen onscreen in Rise, the female chimp would later give birth to a genetically enhanced baby called Caesar, forever changing simian and human history.

Boom!’s second online Apes comic, Before the Dawn (www.apes2014.com), launched an early marketing campaign for next year’s sequel film, “Dawn of the Planet of the Apes,” by hinting at events occurring between Rise and Dawn. This comic was released in print format as a 2013 San Diego Comic Con exclusive. Although rumors persisted that Boom! might also offer a hardcopy version of the Rise prequel, no such print edition was forthcoming, and the story is available only at www.apescomics.com. 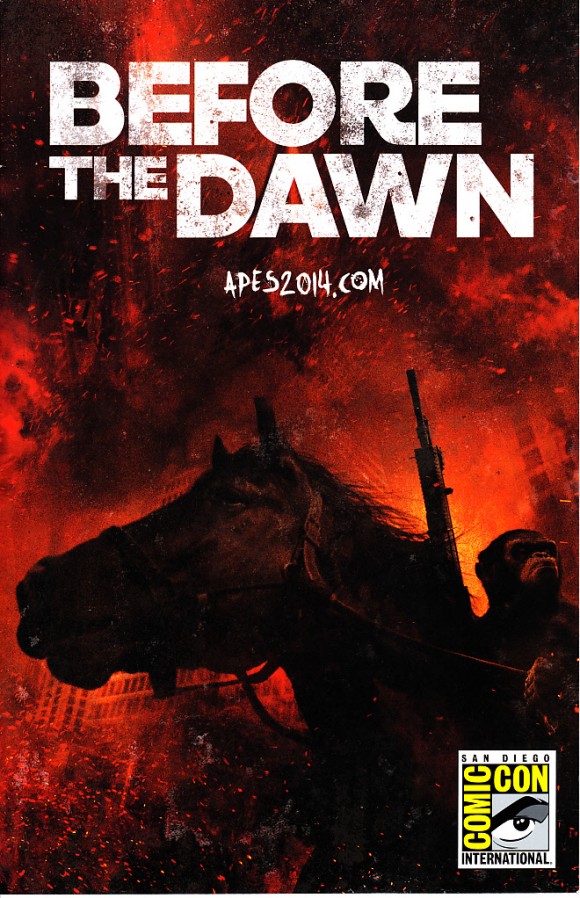 Terror on the Planet of the Apes

Marvel Comics’ longest-running Apes storyline was “Terror on the Planet of the Apes,” with a motley cast of characters including Jason (an angry human teen), Alex (his chimp pal), Lightsmith (an eccentric human wayfarer), Gilbert (his mute gibbon companion), Malagueňa (Jason’s gypsy lover) and Brutus (a racist gorilla military leader). In 1991, Malibu Graphics reprinted the first four chapters of this saga, though no further installments were produced, for reasons unknown.

Thus, when Boom! announced, in 2011, that it planned to reprint the entire “Terror” saga, going so far as to release the first four issues’ covers, readers were ecstatic at the idea of having quality reprints of this fan-favorite epic — and at (apparently unsubstantiated) rumors that Boom! might hire Doug Moench to pen new chapters after more than three decades. Unfortunately, all plans regarding the “Terror” reprints appear to have been quietly dropped, as no further mention was made, and no issues were ever released. 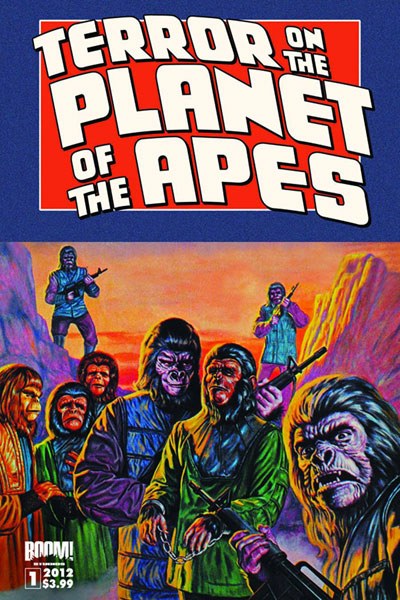 Planet of the Apes: Cataclysm and Beyond 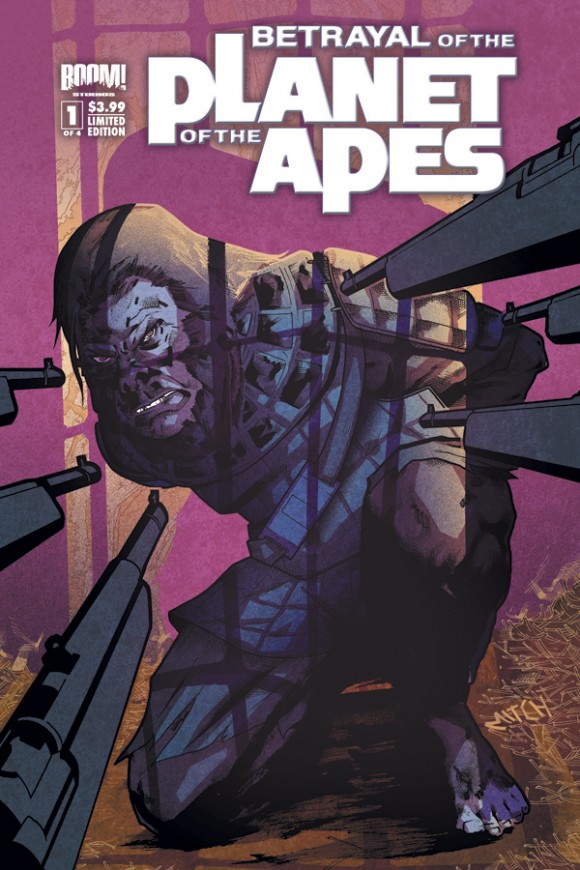 “We didn’t submit any story arcs that didn’t get used,” Bechko recalls, “since Boom! told us, one issue into our last arc, that the series was drawing to a close.” Nonetheless, she and Hardman had hoped to go beyond their 21-issue stint on Planet of the Apes. “We had plans that would have made it a longer arc, and further stories to tell in the POTA universe, but it wasn’t meant to be.”

As Hardman explains, “Since our series was heading toward Taylor’s arrival [in the 1968 film], we’d hoped to be able to develop Cornelius and Zira’s relationship more, and show how they became the couple we know and love from the films. We’d also had plans for an epic covert, mutant human-ape war that only Zaius and a few apes knew about.” This, he says, would have played into why the orangutan agreed with Ursus’ plan to invade the Forbidden Zone in “Beneath the Planet of the Apes.” 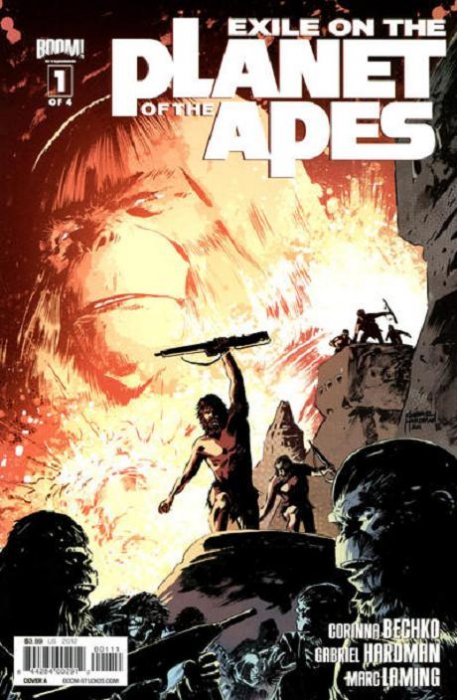 “Sadly,” Bechko laments, “none of this got to the stage of scripting, much less artwork — but at least we did get to lead up to it over the year that we were on the book.”

With Boom! reportedly leaving classic Apes behind after only two years and 42 issues, in favor of telling stories connected to the new films’ continuity, Hardman and Bechko’s plans seem to be on permanent hold, and it’s unknown if the couple will ever return to the upside-down world that Taylor would discover in the 40th century. As with Marvel, Malibu Graphics, Dark Horse, Mr. Comics and Editorial Mo.Pa.Sa., the future looks unlikely for Boom!’s unpublished tales.

Since 1974, a great many Apes comics have been produced, while numerous others have sadly been shelved. Though some of these abandoned concepts were admittedly stronger than others, one thing is clear: All were borne out of the writers’ love for Planet of the Apes. As fans anxiously await word regarding what Boom! Studios plans to do next once the Dawn rises, we can only wonder what might have been had any of these time-lost tales come to fruition.

Rich Handley is the co-founder of Hasslein Books (hassleinbooks.com) and the author or co-author of six books: “Timeline of the Planet of the Apes,” “Lexicon of the Planet of the Apes,” “The Back to the Future Lexicon,” “The Back to the Future Chronology” (with Greg Mitchell) and two upcoming official Continuum episode guides (with Ed Gross). He has written numerous articles and short stories for the licensed Star Wars universe, helped edit Realm Press’ Battlestar Galactica comics and currently writes for starwars.com and Bleeding Cool Magazine. A former reporter for Star Trek Communicator, Rich helped GIT Corp. compile its Star Trek comic book DVD-ROM sets, wrote the introductions to IDW’s Star Trek newspaper strip reprint books and contributed to Sequart’s “New Life and New Civilizations: Exploring Star Trek Comics anthology.” In addition, Rich helped revise Ed Gross’s “Planet of the Apes Revisited” and has contributed to the POTA fanzine Simian Scrolls, in which an earlier version of this article appeared.