An EXCLUSIVE Inside Look: CAPTAIN ACTION for Your Ears

Home » ACTION FIGURES & MERCH » An EXCLUSIVE Inside Look: CAPTAIN ACTION for Your Ears

MERCH MADNESS: The great irony of writing so much about comics and the like is that I have less time than ever to actually read anything.

Listening? That’s another matter. I listen to music when I write all the time. And when I’m out and about, I’ll also listen to podcasts and whatnot.

So what better opportunity to check out Jim Beard’s second Captain Action novel, “Hearts of the Rising Sun” than by listening to it?

Get me my headphones!

This latest adventure of the international man of mystery is a sequel to Beard’s “Captain Action: Riddle of the Glowing Men” — and Jim is already working on his third CA novel, due out later in this 50th anniversary year. 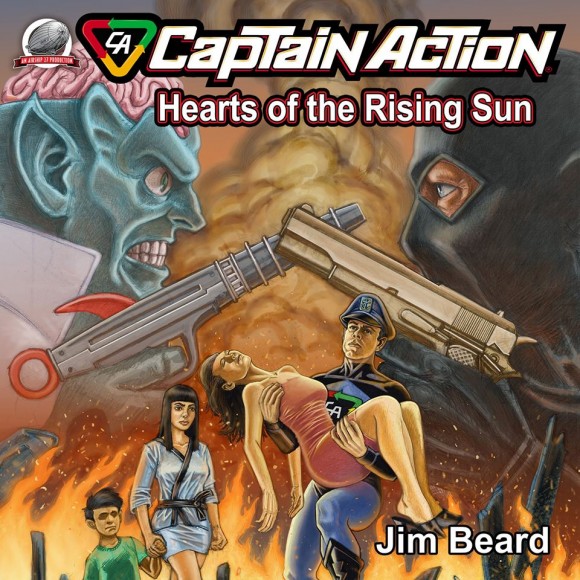 Rising Sun is narrated by Fred Wolinsky, produced by Radio Archives and Audible.com , and is available on Amazon here.

Sayeth Jim: “It’s a distinct and unique pleasure to hear one’s own book in audio form, and an honor to have it produced by Radio Archives. I hope everyone really digs Captain Action’s second pulp outing as much as I did writing it.”

Sayeth Ron Fortier, the managing editor of the book’s publisher, Airship 27 Productions: “Radio Archives and their amazing voice actors have added a whole new dimension to these books. Listening to Captain Action go into action, it is easy to let one’s imagination go back in time to the days of radio melodramas. The fun and excitement are contagious.”

And sayeth Joe Ahearn, co-founder of Captain Action Enterprises: “It’s thrilling to hear these Captain Action tales come to life in this audio-book format. Captain’s hats off to Radio Archives for this great performance.”

Over the next three weeks, we’re highlighting some of the coolest action figures and comics swag on the market for … MERCH MADNESS. Click here for a full INDEX of stories.