ALTERNATIVE FRIDAYS: The Funny Papers, by Jon B. Cooke

Jon’s back with his biweekly feature ALTERNATIVE FRIDAYS!

All ©2013 the respective copyright holders.

By the mid-1970s, long after Robert Crumb launched a comic-book revolution selling his Zap funny books out of a baby carriage on the fabled street corner of San Francisco’s Haight-Asbury in 1967, underground comix were in crisis. The Nixon administration was cracking down on “cultural filth” and also recreational drug use, and abetted by catastrophic Supreme Court decisions giving local jurisdictions the right to define obscenity and cracking down on head shops selling drug paraphernalia, the revolutionary comic books of Crumb, Gilbert Shelton, Jay Lynch, Trina Robbins, and company were faced with End of Days.

Y’see, kiddos, prior to the double-whammy of having their First Amendment rights threatened and their distribution squashed under the iron heels of Tricky Dick and Warren Burger, undergrounds made a ton of dough and, by 1970, hippy stores and college dorm rooms were awash with a flood of titles. Zap, Young Lust and anything Crumb touched went into multiple printings and often, profit-sharing being what it was for many in these halcyon days, the cartoonists were seeing some flush times. But the libertine, iconoclastic, often anarchistic, usually sexually explicit comix attracted the ire of the Establishment and the hammer came down.

What was a hardworking, talented underground comix artist to do in the face of Establishment oppression??? Don’t get me wrong: A good number of publishers remained and sold their back stock through, for instance, Denis Kitchen’s Krupp Comics Works mail order house, but the market for new material diminished considerably and the more entrepreneurial counter-culture cartoonists sought – and created – new outlets.

The most memorable of these “life boats” was the well-remembered and innovative Arcade, The Comics Revue, a quarterly magazine-size anthology helmed by luminary creators Art “Maus” Spiegelman and Bill “Zippy the Pinhead” Griffith, which lasted for seven exquisite issues between Spring 1975 and the Autumn of 1976, featuring a mind-blowing array of the finest underground cartoonists. [For an exhaustive look at Arcade, check out this writer’s interviews with Art and Bill in the Comic Book Artist Vol. 2 #1 PDF now available at the fine folks at www.twomorrows.com.]

Oh, cartoonists could find the occasional gig at Playboy, Esquire, High Times, National Lampoon, and in surfing and biker mags in the mid-’70s, as well as in the diminishing field of the alternative weeklies that spotted the country, but the heyday of the undergrounds were over and the outlets less and less …

While recently ferreting through the ample treasures at The Time Capsule, “The Official Comics Shop of Comic Book Creator Magazine,” owner and pal Rob Yeremian alerted me to an oddity I never knew existed. “Betcha you never saw this,” says he, as Rob pulls out a pile of yellowing tabloid newspapers and places before me a lost treasure, issues two and three of a newsstand-distributed, four-color monthly from the early days of 1975, The Funny Papers. Ron Barrett, National Lampoon cartoonist (remember “Politeness Man”?) and kids book co-author (“Cloudy With a Chance of Meatballs,” anyone?), served as the mag’s art director and, ever the intrepid correspondent, yours truly immediately tracked down the artist and a forthcoming Alternative Fridays installment will feature our interview about his career and this lost gem.

So, this installment of Alternative Fridays (giving me time to finish up the next issue of Comic Book Creator – featuring Russ Heath!), I’m including a whole gaggle of scans from the two issues of The Funny Papers in my possession with captions, getting you all prepped for the Barrett talk. Oh, and if one of you lucky folks happens to have a copy of TFP #1, wouldja, couldja please share scans with us? Now, on with the presentation! (Careful with the clickage on the pix. They’ll embiggen but some are kinda sorta NSFW. — DG)

Among the underground legends who contributed to the short-lived tabloid The Funny Papers were Ted Richards [left], Vaughn Bodé [center], and Jay Kinney [right]. All ©2013 the respective copyright holders.

Doubtless the greatest cartoonist to grace The Funny Papers is R. Crumb, who contributed strips to all three issues, as well as the header illustration [center] for then-wife Dana’s foodie column. We’ll be taking a deeper look into the underground luminaries who were featured in the four-colored mag in a forthcoming installment of Alternative Fridays. ©2013 the respective copyright holders. 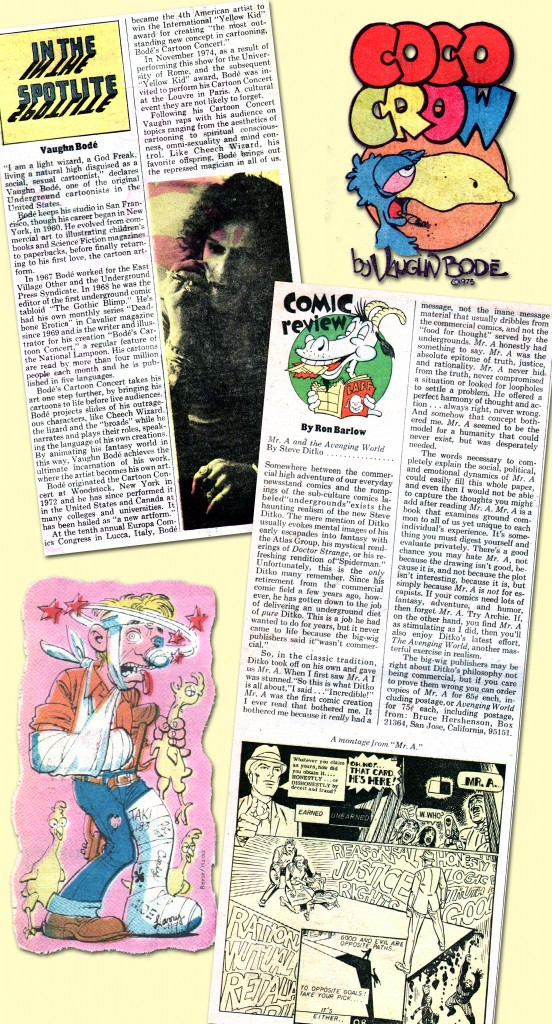 Not only were the pages of The Funny Papers filled with outstanding comix material but the text contained articles of note to us comic book aficionados, including this pair of features on, respectively, the late, great creator of Cheech Wizard, Vaughn Bodé, and co-creator of Spider-Man and Doctor Strange, Steve Ditko, the latter reviewing the Sturdy One’s excellent Mr. A comics. To balance out the graphic, we’re including an illustration by Ralph Reese and Larry Hama, at bottom left, which graced a “Hassles” column offering advice regarding troubles with “The Man,” man! ©2013 the respective copyright holders.

Triple-threat Bruce Jones, renowned comic book writer, artist and editor, was delineator for a series of dream interpretations on the regular Funny Papers feature, Dreamz-z-z, where readers would share their nocturnal fantasies and Jones would draw it all out. The reddish stains on the right strip, alas, were a printing defect marring my copy. ©2013 the respective copyright holders.

Imagine my surprise to find contributions to this hippy/stoner rag of a mag from comic book veteran and stalwarts Marie Severin and George Evans! The Mirthful One drew the All in the Family parody at left and the talk show ill on right while “Air Ace” Evans illustrated a Sleuthing feature. ©2013 the respective copyright holders.

Not only did The Funny Papers give serious props to mainstream and underground comics, but the terrific comic strips of yesteryear got their due as every issue also featured reprints of Winsor McCay’s masterwork, Little Nemo in Slumberland, but also the wild, wonky and terrifically endearing Smokey Stover by Bill Holman, a classic of screwball funnies by any measure. ©2013 the respective copyright holders.

That’s all for now, effendis! Join us in a few weeks for a talk with The Funny Papers art director — and excellent cartoonist/illustrator, too, don’tcha know! — Ron Barrett, when we’ll learn more about this little-known magazine, all lavishly illustrated with much more underground comix art! In the meantime, Happy Thanksgiving, everybody and enjoy your Tofurkey!