All You Need Is Love — Alex Ross & The Beatles

Dark Hall Mansion is offering a limited edition print of a beautiful Yellow Submarine piece by the incredible Alex Ross.

The full piece is choked full of characters from the classic animated film. 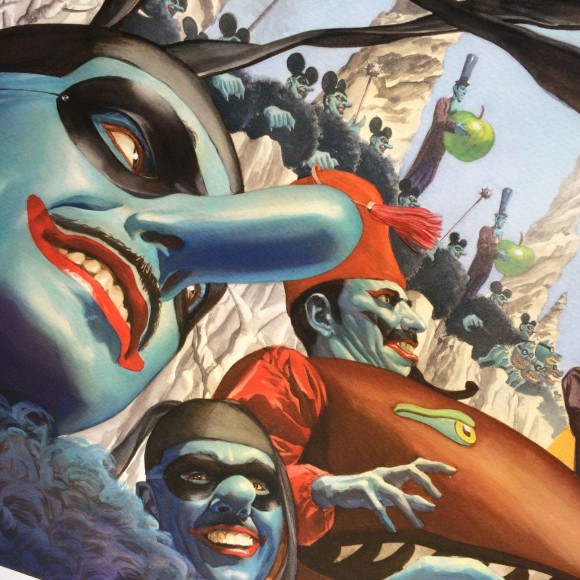 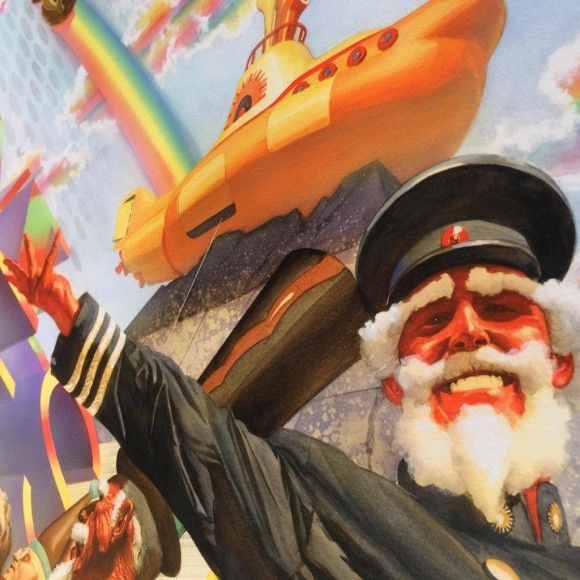 Old Fred and Lord Mayor of Pepperland are beaming with life. 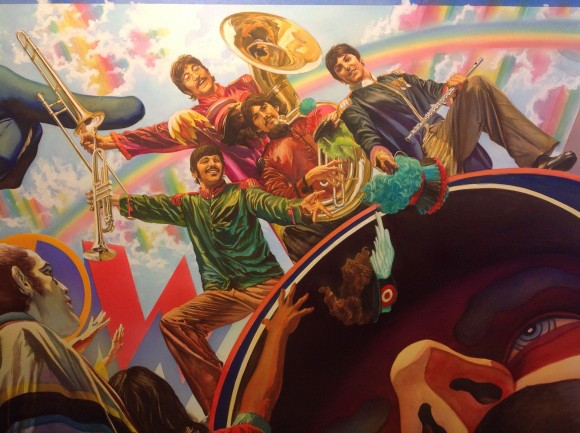 Ross captures the likeness of John, Paul, George and Ringo as few ever have. It looks as if they posed for this piece just last week. 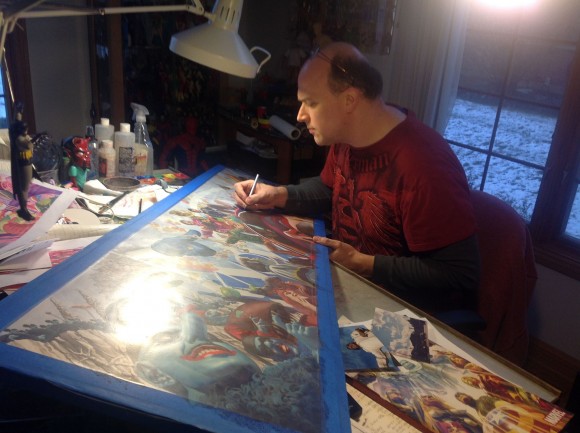 Ross in his studio putting the finishing touches on another masterpiece.

Here are all the details from the Dark Hall Mansion press release:

Dark Hall Mansion, working with Apple Corps Ltd and Bravado International, their North American licensing agent, will release Alex’s singular vision of the Beatles’ groundbreaking 1968 masterpiece, “Yellow Submarine.” Driven by the Beatles legendary music and inspired by the generation’s new trends in art, the film resides with the dazzling styles of Pop Art, yet it’s “Yellow Submarine’s” art direction and production design by Heinz Edelmann that most defined the film’s pioneering look, and it’s in this spirit of unique innovation and creativity that Alex Ross’s highly unusual take can best be appreciated.

Alex has often been referred to as ‘the Norman Rockwell of comics’ yet his “Yellow Submarine” piece reveals the similarly powerful influence of master surrealist Salvador Dali, whom Alex has also recognized as a guiding influence on his style. His Blue Meanies are a sight to behold as is his overarching composition that does justice to the sweep of this legendary animated classic. Alex has commented prior on the body of his career’s work noting, “Hopefully by painting the work, you gain a sense of life and believability that will draw the reader in a little more,” and this is dynamically manifest in his massive 6-foot original painting for the Beatles’ “Yellow Submarine.”

Alex has worked on countless high profile projects, legendary comic book characters, Hollywood studios, a print for the Academy Awards, and so much more but he is very well known at this stage of his career for taking on projects of personal relevance and resonance most of all, and it’s in this context that he enthusiastically accepted Dark Hall Mansion’s invitation to a Beatles project, being an enormous fan of the world’s most famous band. Let Alex’s words convey just what the Beatles personally means to him and how meaningful “Yellow Submarine” is as well:

“For as long as I can remember hearing music, I have loved the Beatles. Not only do I believe they are the greatest musical group of all time, but also one of the greatest things to have happened in human history. “Yellow Submarine” has also been one of my favorite films since I was six years old. The opportunity to work with the Beatles’ likenesses in the very inspired context of the “Yellow Submarine” film is an absolute dream come true. There is so much I love about these men, their legacy, and this film.”

It doesn’t get any more clear and his “Yellow Submarine” piece is all Alex. This is the first time Alex has ever done a Beatles project and he was given little constraint, so it’s safe to say all involved  on the project, from LA to London, where shocked on receiving a note and attachment one day revealing a stunning 6-foot painting and just exactly how passionate Alex really was about this project! Please see some very special candid progress images of Alex’s piece in development for DHM, attached, each showing him at work on the original painting in his private studio. We’re certain you’ll be impressed!

Both the Standard and Canvas editions are attached and may also be viewed directly on Dark Hall Mansion’s Blog here:

All Editions go on sale Thursday, Feb 26, 2015 at Dark Hall Mansion. They’ll go on sale on our dedicated Store page at

*In fairness to all collectors who wish to purchase DHM’s Alex Ross “Yellow Submarine” limited editions: ALL SALES ARE FINAL.

The Beatles limited edition print series is created by Dark Hall Mansion. ‘The Beatles’ is a registered trademark of Apple

Dark Hall Mansion is a labor of love. We are passionate about art, about the work of print and poster artists present and past, here and abroad, we are committed to bringing their skills to the forefront on projects both compelling and exciting, bridging their studios and creations directly with your walls and personal collections.

More information can be found on these and other editions available from Dark Hall Mansion at: