ALEX DE CAMPI Has Opinions. And You’ll Want to Read Every One.

Home » PREVIEWS » ALEX DE CAMPI Has Opinions. And You’ll Want to Read Every One.

A MIGHTY Q&A with the pop-culture-saturated Queen Bee Vixen herself. PLUS! EXCLUSIVE Preview of her LADY ZORRO #2 from Dynamite, out Wednesday 8/13! 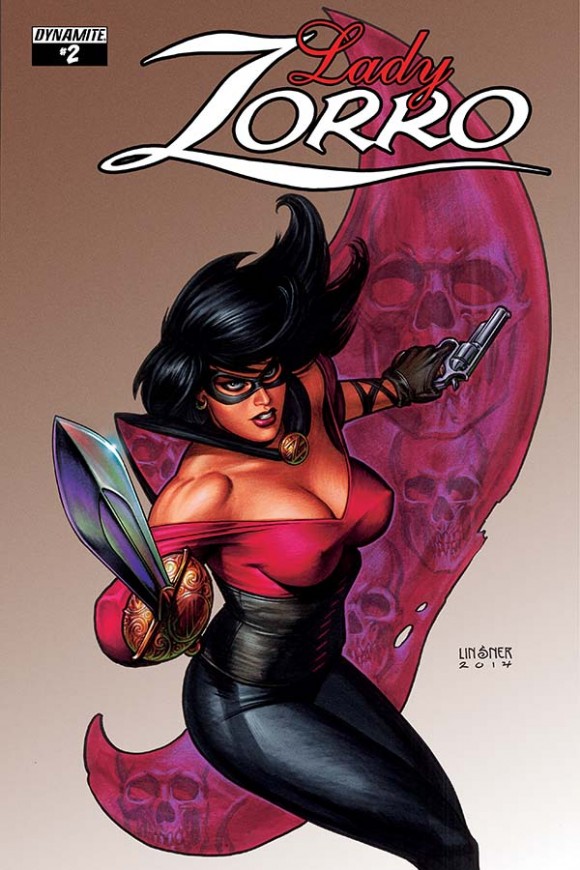 Alex de Campi: I’m not cleared to talk about most of it, but I can confirm that after college I spent five years in Hong Kong, some time kicking around Manila and Latin America on someone else’s dime, and then ten years in London. The stories about me crossing the South China Sea in sailboats and sneaking across the Russian border are both true. I can also confirm my father briefly worked for the NSA and my mother worked at the CIA for a few years. 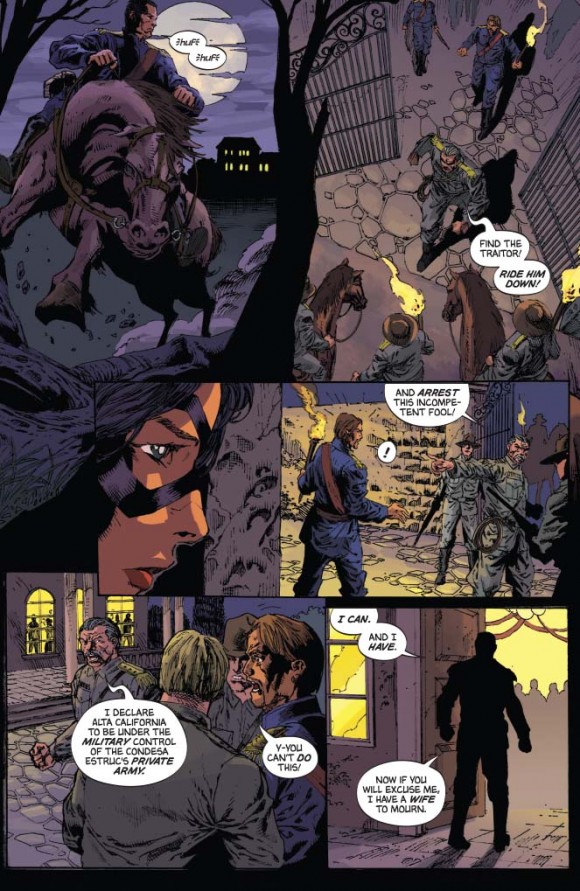 What’s the what on Lady Zorro?

I love crazy, swashbuckling adventure stories and the folks at Dynamite were awesome enough to let me write one. I’m a huge fan of Marini & Desberg’s The Scorpion (a bande dessinée) and it’s always made me sorta sad that there weren’t more mainstream comics in the US like it. So, y’know, be the change… I have four issues of completely over the top action, violence, sex, kick-ass ladies, super cool NDNs, and eeeevil German mercenaries. With oh my god jawdroppingly amazing art by Rey Villegas. GO BUY IT. MAMA GOTS RENT TO PAY. 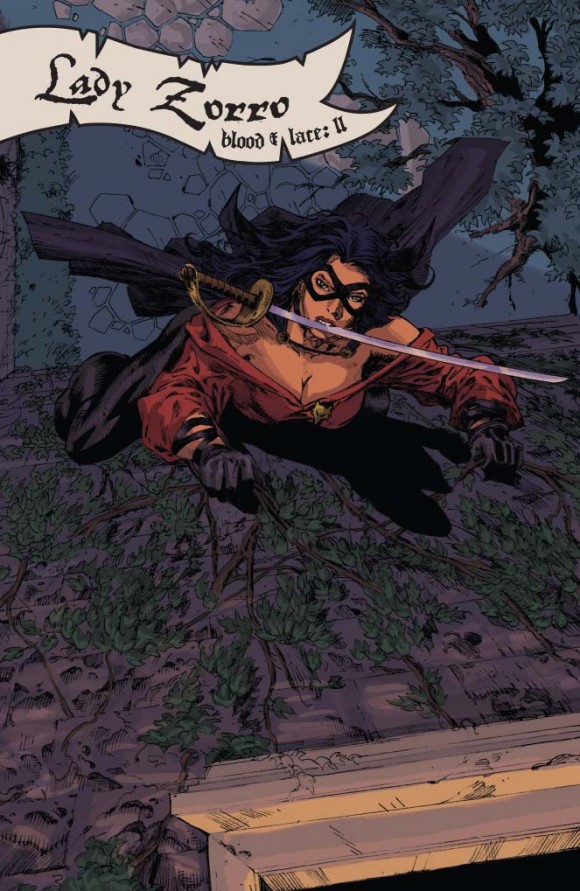 Walk us through your average day. I’m not talking about when you have tea, though if that’s important to you, have at it. But, really, how as a freelance writer and director do you make it all work?

I’m not only a freelance writer. I also have a part-time job, an (occasional) directing career, 3 dogs, and am the single mom of a 3 year old daughter, in rural New England. And I volunteer for an animal rescue. I… never have a moment to myself. It’s a fight just to have a complete thought without someone interrupting. I am always exhausted. Because I’m broke as hell, I live in a 1-bed apartment, so my daughter and I share a bedroom. I don’t watch TV. I don’t have a social life. I don’t have money.

About once a fortnight I stay up half the night bingeing on anime (current faves: s Knight of Sidonia and Madoka Magica. Previous binge: AoT, natch.) That is my exciting Saturday night out. Every spare moment when my daughter is asleep or at daycare (I can only afford 3 days a week) I am writing or lettering comics. If I don’t write, I get so cranky after about four days that I make the lives of everyone around me miserable, until someone caves in and helps me get an hour to myself to write down ideas. I just came back from 10 days on an island with no internet or phone, which was SUPER. I lasted the requisite four days (of making up stories in my head) until I started snarling at everyone, barricaded myself in my room and cracked open my notebook. Over the next six days, I wrote a WFH issue and the long-gestating #1 of a new series. And copious notes on other stories. 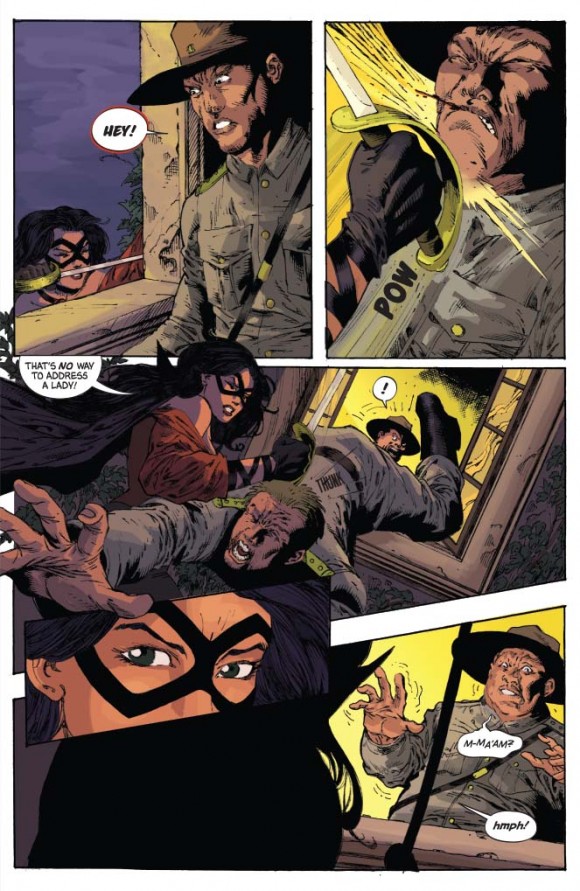 Unplugging was super. Lots of issues on stories unfolded themselves like slow-motion exploding origami, once I had the ability to make myself still. I think I’m going to do one week a month where I am off grid and just write longhand in my trusty, posh Paolo Olbi notebook. The only issue is checking emails for animal rescue-related stuff… I handle the facebook page and updating all the petfinder and adopt a pet listings. It’s a shame, as I love social media. I come from a long line of bar-stool Shakespeares, so being fast with a quip is something in my DNA. But… ultimately, the longer work is what lasts, not some tweet or other (no matter how much retweeted). So, a week off every month it will be.

But yes, normally I write in the mornings (when I can) and letter in the afternoons (when I can) and fit in all the other stuff (being mom, part time job, volunteer work) around it. I get a lot of story-thinking done while walking my dogs — I have a blind pit bull, we go jogging together — or working at my part-time job, which is a mostly outdoor / non-computer job.  When my daughter isn’t at daycare, though, my focus is 100% on her — we go to the beach or hike or have painting mornings or craft days. I try to tire her out so she will nap and I can work in the afternoon, but I normally only succeed in tiring *myself* out while she steadfastly refuses to nap. 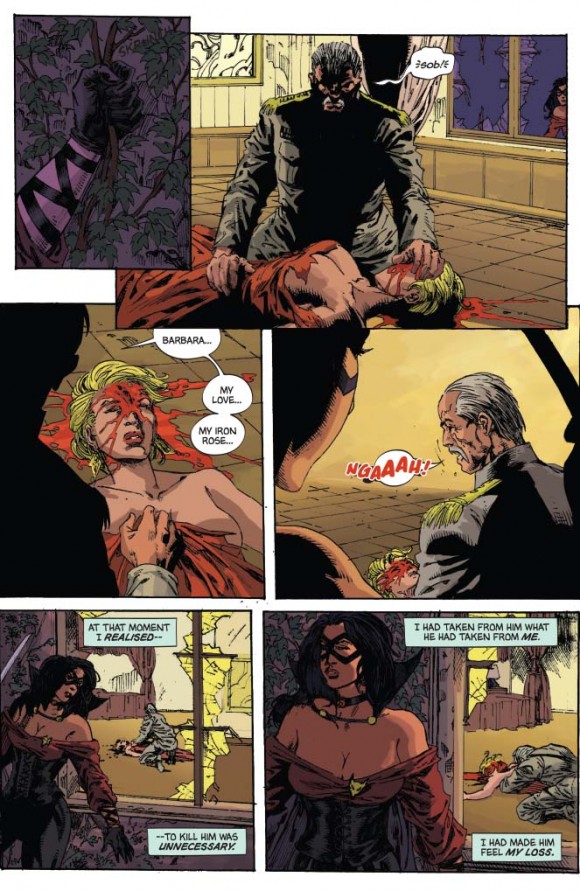 What are the most interesting sources of inspiration for you? Where do you find some of your best ideas?

My stories come from little loops or snags I see in the fabric of my life. I pull on them, and they start unravelling, and then I follow the thread and ultimately, sometimes years later, they lead me to a story. I wrote an entire 8-issue miniseries based on getting annoyed that Tim Sale’s art of gorgeous women in ballgowns always had some dude standing in front blocking The Dress, because Mainstream Comics. So I wrote a noir series about four women, and picked a time period where they could be in awesome dresses for the entire story. Ramon Perez is drawing it; it’ll come out in… maybe about 18mths? The genesis really was some Tim Sale commission I saw on Twitter, but then it became about the four characters and desperation and abusive relationships and the nature of people from the USA abroad in expatriate communities… a little American Burmese Days, if you will.

I got annoyed about how there was a lack of shooting people in the head in the Winter Soldier miniseries that Remender just did, and that annoyance eventually turned into a miniseries about Russian assassins hunting down a defector in the US in the early 1970s, and then it became a lot more about how the Man always wins, in a particular early ’70s Zabriskie Point/Badlands/Easy Rider kind of way. About freedom, and the illusion of it. About how both the US and the Soviet Union were feeling pretty sour around then, but how you can also still be a kid and be amazed by things. 4,000 pages of research reading later, it’s an entire huge maxiseries (planned, we’re only doing the first story) that plays out as a duel/series of encounters between a CIA and a Soviet operative from 1971-1995. 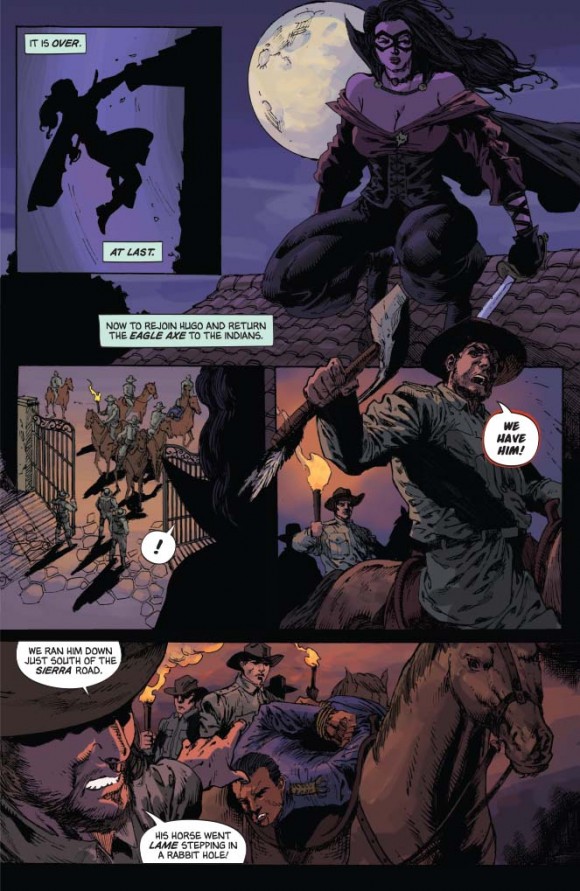 I’ll play with a feeling or an idea for years, though, before it becomes a story. I’ll get something, and I’ll keep poking at it, and putting it aside, until one day it lets me know what the first 8 pages are, and what the last page is. Then it’s ready for real work. This is a luxury I have, doing mostly creator-owned work, and because I don’t really “pitch” a way a lot of writers do. When I have a story I want to tell, I’m committed to it. I find an artist collaborator, I write the whole damn thing, then I take it to a publisher and say, hey, we’re doing this. Want in? This annoys some publishers a lot because they want a say earlier on in the book. But… they forgive me.

Turning back the clock a bit, what were some of your favorite comics growing up? Do you ever revisit them? What about old TV shows or movies?

I was a huge fan of Claremont’s X-Men as a kid. (And I got to go tell him that at Phoenix Comicon! Which was super. I totally went and fangirled at him and he was such a gentleman about it.) I have not revisited those books… I find that my memory of things is never the same as the actual thing, and in every single case, my memory is the better version.

Old movies — I watched a LOT of TV. Latchkey kid… so there was Channel 29 in Philadelphia which wasn’t a Fox channel then, but a cruddy local channel that played B-movies and MASH reruns all day. I grew up watching war films and every spy film imaginable, and ANYTHING with a knight in it, literally ANYTHING, even Black Shield of Falworth (multiple times). Plus the tamer exploitation/blaxploitation films like Cleopatra Jones…. I want to revisit a lot of those movies. I love film. My happiest moments in childhood were sitting at our local two-screen cinema watching the velvet curtains part and reveal the silver screen… waiting for ANYTHING to be projected on it, didn’t matter the quality, magic was all the same. 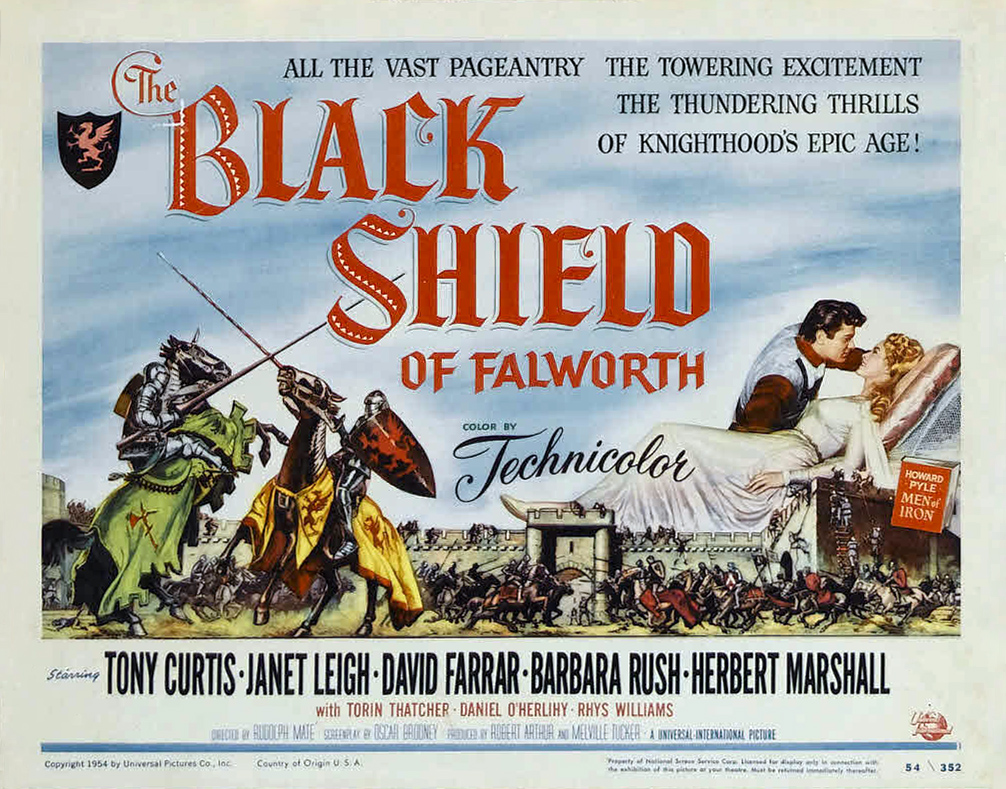 What do you wish you could do over again? I know a lot of writers don’t like to go back and re-read their own work. All they find are the mistakes and things they wish they’d done differently. Is it the same for you?

I never look at my books after they are sent to the publisher. Ever. There’s no going back; only forwards. By the time the book comes out, it’s like being complemented on an old coat that you gave away to Oxfam years ago… oh, that old thing?

Your turn: What question have you always wanted to be asked in an interview? And what question are you tired of?

Oh, gosh. There’s nothing I’ve ever wanted to be asked in an interview. I’m skilled at tangents so if I want to talk about something? I will. Doesn’t matter if you ask about it or not. Questions about “what is it like being a woman in comics” can go to hell, and so can questions like “how can you write Grindhouse AND My Little Pony?!”  These questions have an inherent pigeonholing to them, and that’s what rubs me up about them. Hey, I can write two different things! ZOMG. I can also direct film and I sketch/storyboard pretty well. Can’t sing for toffee, but hey. Creative people can be good at more than one thing, and be interested in more than one genre. How can you like Black Sabbath AND The Beach Boys?! And ugh, the “woman in comics” question, like it’s still some sort of novelty and I’ve wandered off the freak show for the kids in the midway to point at, shocked and amazed. 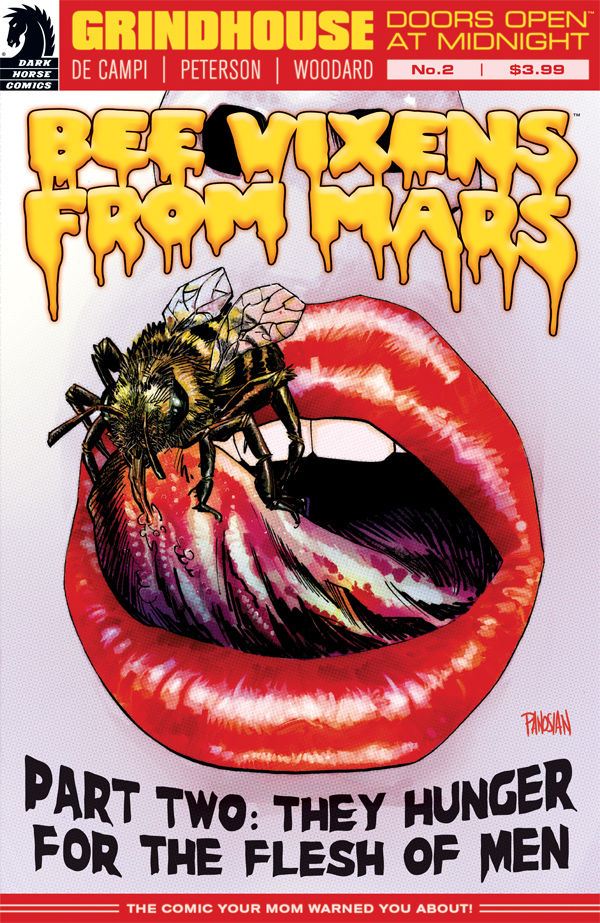 What’s the best part about working in comics today?

That I’m able to have a career writing whatever I damn well feel like, and owning the rights to it, thanks in 100 percent to Dark Horse and Image.

The lack of diversity at the Big Two superhero publishers. And their large focus on grim, miserablist, anti-fun, anti-happy books. There are bright spots: Jeff Parker doing Batman ’66; Mark Waid doing Daredevil; G Willow Wilson’s superlative Ms. Marvel. But overall, you know, there is a shortage of awesome things that make the 10-year-old Claremont X-Men reader in me clap in delight. Or maybe I’m reading the wrong books? I never have $4 to spare so when I DO pick up a #1 I have high hopes for and it’s terrible, I get so upset. That was a gallon of milk and a bag of apples I just wasted.

Looking at your body of work, what do you point to and say, “Yeah, that’s it. That’s the one project that defines me the most.”?

Ashes. Definitely Ashes (the second part of the great Smoke/Ashes graphic novel from Sept ’13 – Dark Horse – a 425 page doorstop/cockroach crusher extraordinaire). Shows off so much of what I do. Devastating sadness, sheer fucking terror, unexpected formalism, and great set-piece action. 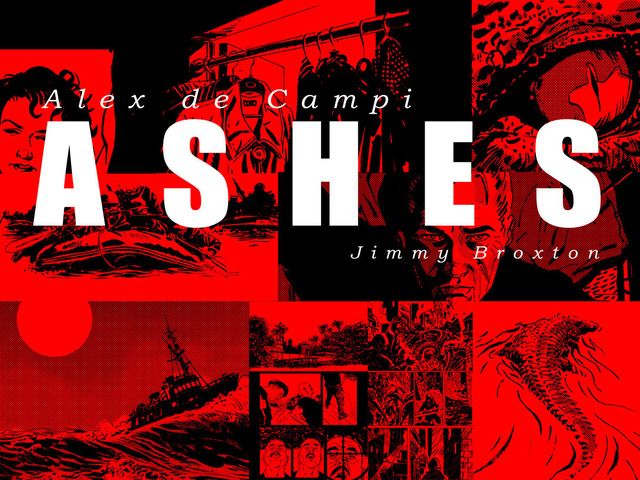