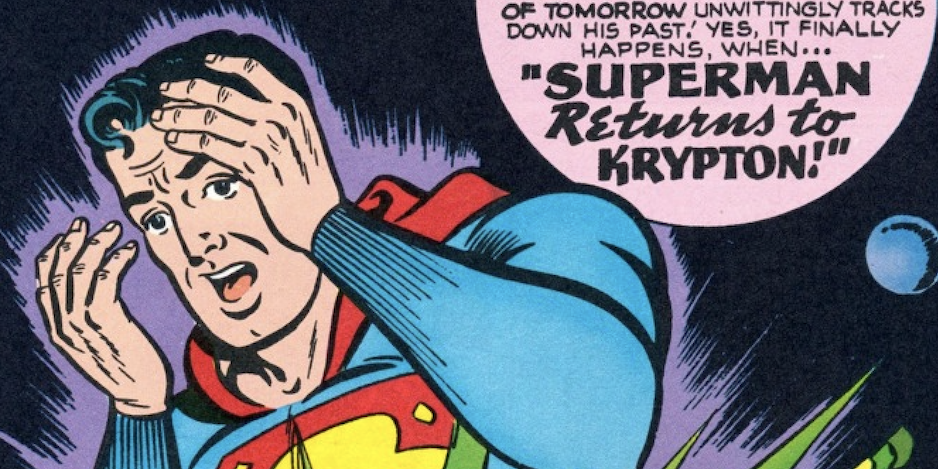 In 1948, Al Plastino (who was born 101 years ago on Dec. 15, 1921) began a 20-year run drawing the various Superman titles, and then in 1968 took over illustrating the Batman with Robin the Boy Wonder comic strip for almost four years.

Plastino grew up in the Bronx. He loved to draw, even from when he was a child, and found work in the comic book industry while he was still a teenager. His early assignments included Sub-Mariner, the Vision, the Patriot, and inking Captain America for Timely. He also took over the art chores of the newspaper strip Hap Hopper, Washington Correspondent for a few years.

In the late 1940s, he was hired by DC and was soon put to work on the Superman line. It was a relationship that continued even after he had left the comic-book side for the Batman newspaper strip, because DC asked him in 1970 to draw his established versions of Superman and Jimmy Olsen’s faces over Jack Kirby’s art in the earliest parts of the King’s runs on Superman’s Pal, Jimmy Olsen and The Forever People. 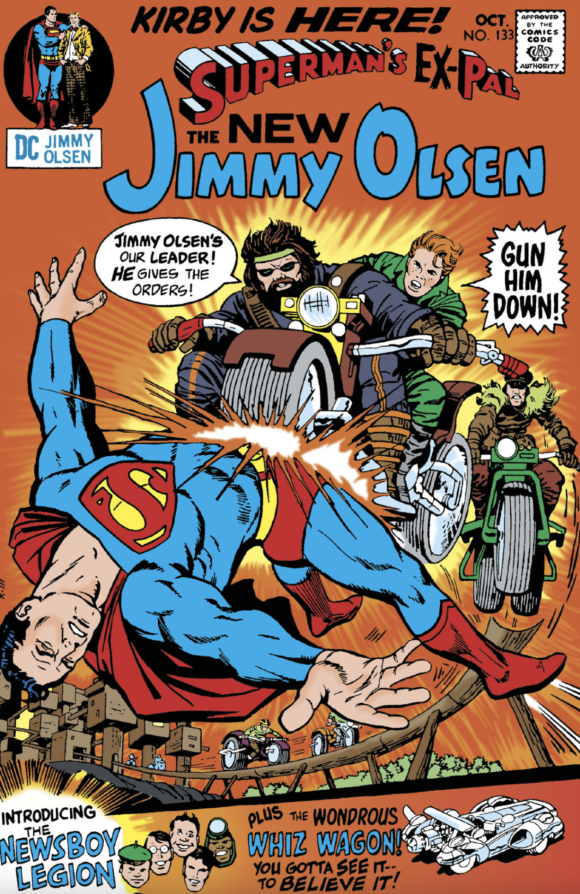 Jack Kirby and Vince Colletta, with Plastino alterations on Superman

After the Batman strip ended, Plastino worked on the Ferd’nand newspaper strip for 19 years. (And during that lengthy run, he also did two years of Nancy strips!)

During his time at DC, there were a number of famous firsts, lost loves, and fond farewells of important characters in the Superman canon. Here are 13 highlights (in chronological order):

Action Comics #120 (May 1948) – “Superman, Stunt Man!” Plastino drew a few other Superman stories for DC around that same time, but this was the first to appear on the newsstand. 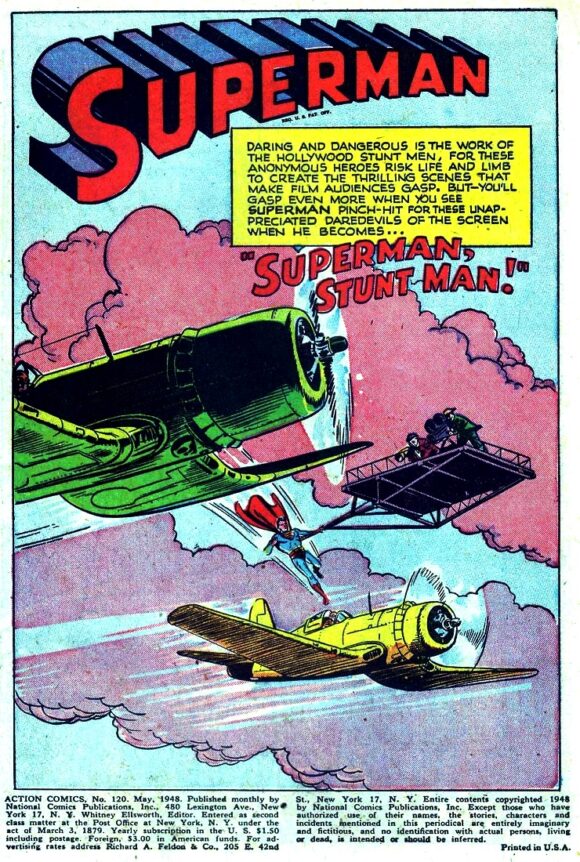 Superman #61 (Nov.-Dec. 1949) – “Superman Returns to Krypton!” This story, written by Bill Finger, has a double whammy. At the outset, it was the first appearance of Kryptonite. As Superman attempts to discover why two stones weakened him, he finds out they were meteorites. He uses his superpowers to go backward in time in order to chart the course of their path back to their original planet. While viewing events there, he sees an amazing sight — just as the planet is about to explode, a scientist and his wife send their baby to Earth. When Superman witnesses the baby being discovered by the Kents, he realizes for the first time he was that baby and he was from Krypton! 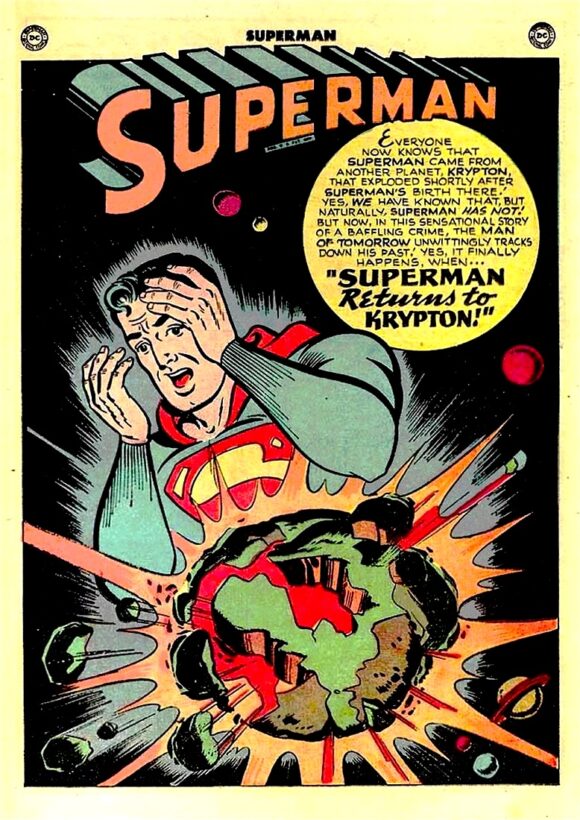 Fans knew that from the first issue of Action Comics a decade earlier, of course, but it took all this time for Superman to learn the truth. And if that wasn’t enough for one comic magazine, Plastino also illustrated another Superman story in it in which the Prankster interfered with the broadcasting of The Adventures of Superman radio show.

Adventure Comics #247 (Apr. 1958) – “The Legion of Super-Heroes.” The first appearance of the Legion by writer Otto Binder was meant to be a one-off story but their popularity was such that they would return several times, then get their own feature, and eventually take over Adventure Comics for a time. 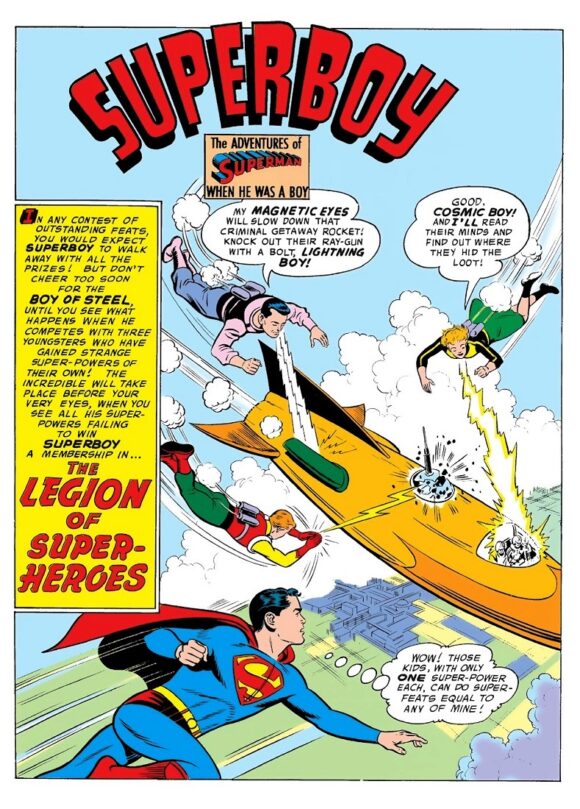 Action Comics #242 (July 1958) – “The Super-Duel in Space.” The first appearance of one of Superman’s greatest threats, Brainiac. The story (written by Binder) also introduced the bottle city of Kandor, containing millions of Kal-El’s fellow Kryptonians. 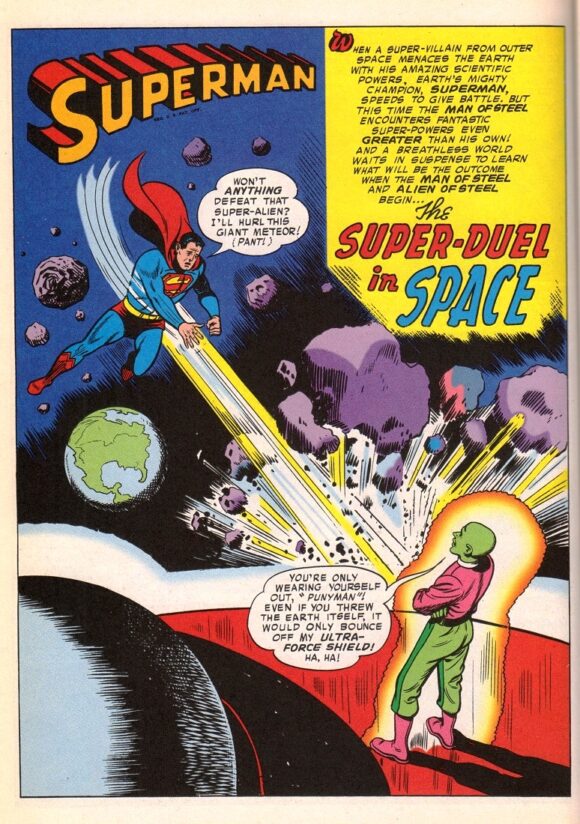 Action Comics #252 (May 1959) – “The Supergirl from Krypton!” Supergirl makes her debut in a story drawn by Plastino and written by Binder (using a variation of the Super-Girl character he created in Superman #123, August 1958). As with Superman, she was also an orphan when she reached Earth and he set her up in an orphanage as Linda Lee. She would soon be adopted by Mr. and Mrs. Danvers and, in years to come, her Kryptonian parents would prove to still be alive, trapped in the Survival Zone (a variation of the Phantom Zone but without villains). 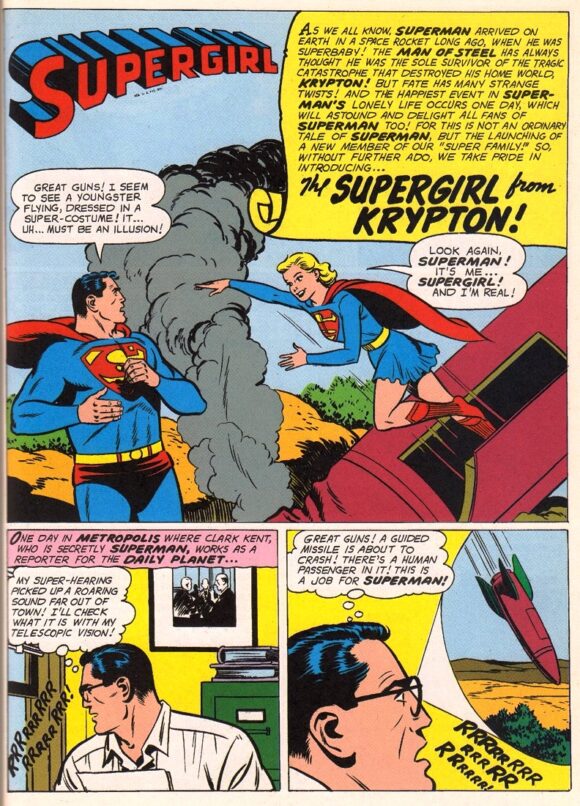 Plastino also drew the issue’s lead story that introduced the menacing Metallo, the man with a Kryptonite heart. (Speaking of villains, a co-creation of writer Jim Shooter and Plastino’s would appear a few years later in Action Comics #340, August 1966, and earn himself a long-lasting position as one of Superman’s greatest enemies… the Parasite.)

Action Comics #254 (July 1959) – “The Battle with Bizarro!” The original Bizarro appeared in Superboy #68 (Oct. 1958) as a horrific-looking version of the Boy of Steel. It was a heartbreaking story written by Binder, with definite inspiration from the Frankenstein Monster legend (including each being befriended by a blind person). This time, in a two-issue tale, Lex Luthor recreates Bizarro as an imperfect adult version of Superman. While Bizarro would soon appear in a series of humor stories, here he was still a creature to be pitied, seeking to be loved and accepted as Superman himself was… but always rejected because of his appearance. In the second part of the story, “The Bride of Bizarro!” (Action Comics #255, August 1959), a Bizarro Lois is created to be his mate (again reflecting the Frankenstein legend). 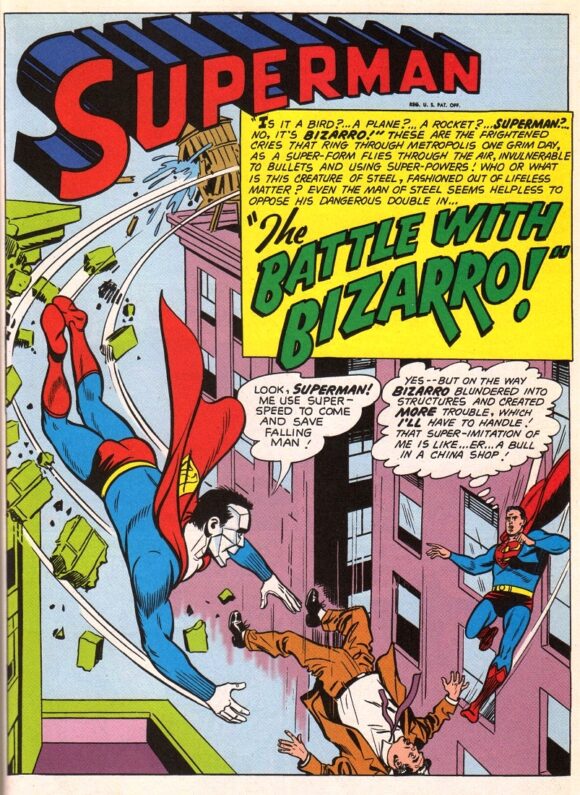 Superman #135 (Feb. 1960) – “When Lois First Suspected Clark Was Superman!” The title says it all (although her suspicions have been around since Superman #17, July-August 1942, in the story “Man or Superman?”). Written by Jerry Siegel. 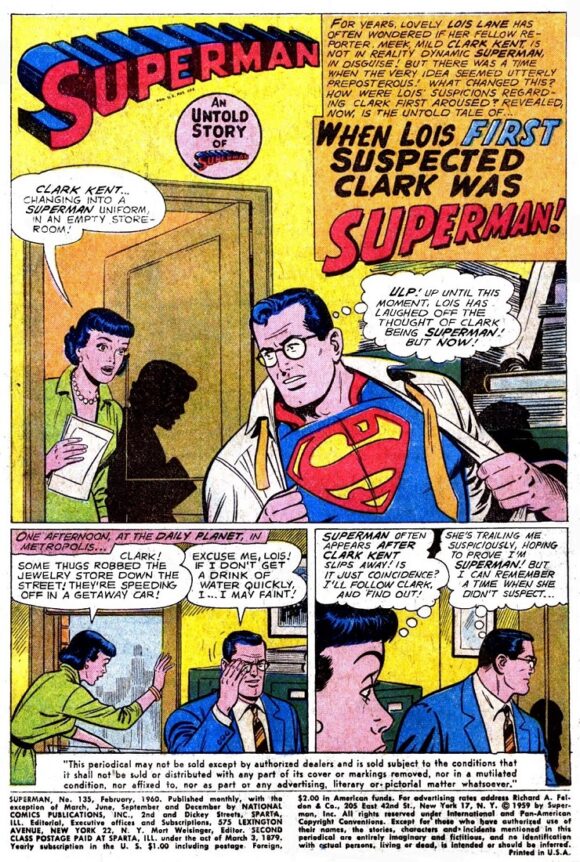 Adventure Comics #271 (Apr. 1960) – “How Luthor Met Superboy!” Luthor’s hate for Superman is explained in this story by Jerry Siegel, looking back at when he and Superboy were friends in Smallville. One of young Lex’s scientific experiments went wrong and created a fire. Superboy blew it out but the chemical fumes caused Luthor to go bald. For years, that was Luthor’s reason for loathing Supes. 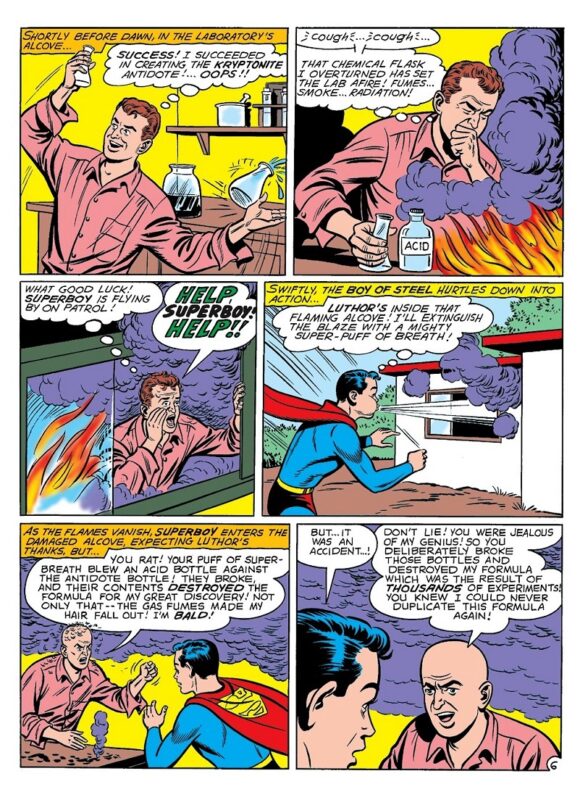 Superman #161 (May 1963) – “The Last Days of Ma and Pa Kent!” In this heartfelt story written by Leo Dorfman, Clark’s adopted parents fall victim to an ancient South Seas virus. 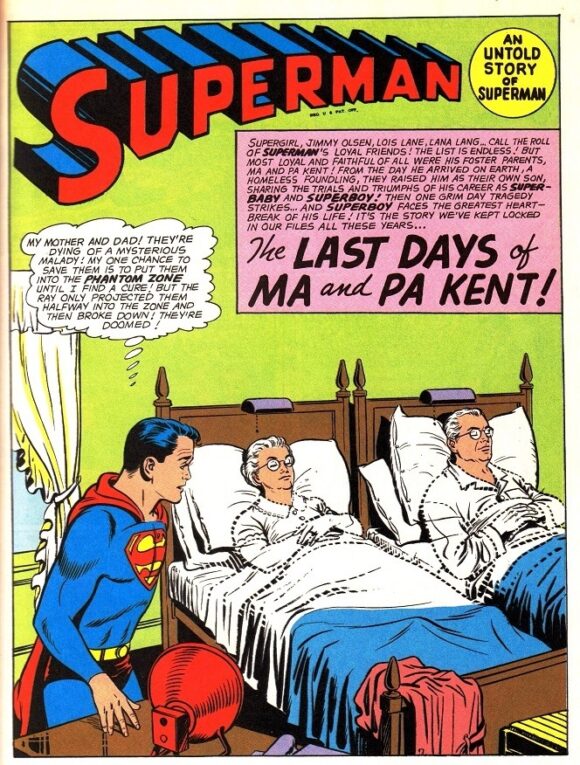 Superman #165 (Nov. 1963) – “The Sweetheart Superman Forgot!” Superman lost a number of loves over the years (Lyla Lerrol and Lori Lemaris, among them) but not one was more poignantly portrayed than Sally Selwyn. He fell in love with her after he had lost his memory and his powers due to Red Kryptonite, and he ended up crippled in a wheelchair… yet she loved him, wanting to marry this wonderful ordinary man because of his decency and goodness. Superman recovered both his powers and his memory — but with no recall of Sally. It was a powerful tale by Jerry Siegel and drawn with heart by Plastino. A sequel four issues later, again by Siegel and Plastino, had Superman suddenly remembering Sally and they got together again, but it still ended painfully for the lovers. 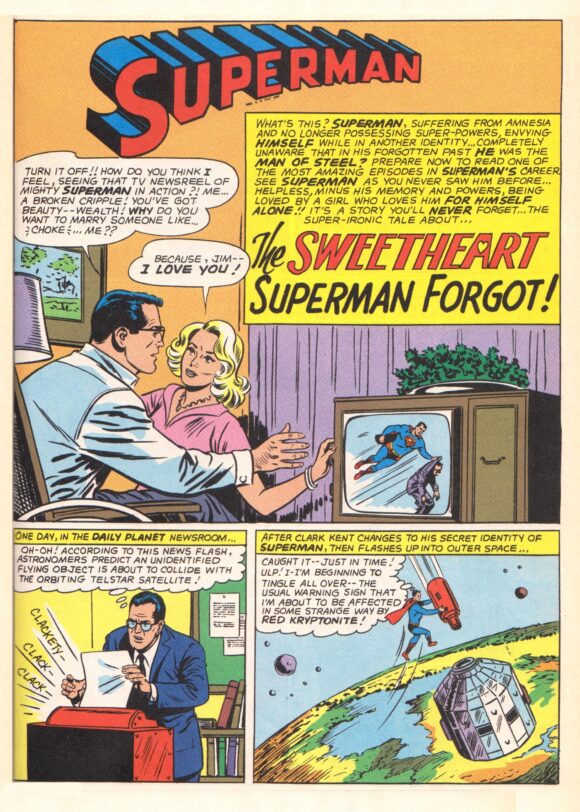 Superman #170 (July 1964) – “Superman’s Mission for President Kennedy.” A touching tribute to the late president written by Bill Finger and E. Nelson Bridwell and drawn by Plastino. (It was created in conjunction with the Kennedy adminitstration but did not run until after JFK was assassinated.) Batman with Robin the Boy Wonder, Sunday, May 19, 1968. Plastino took over from Joe Giella. 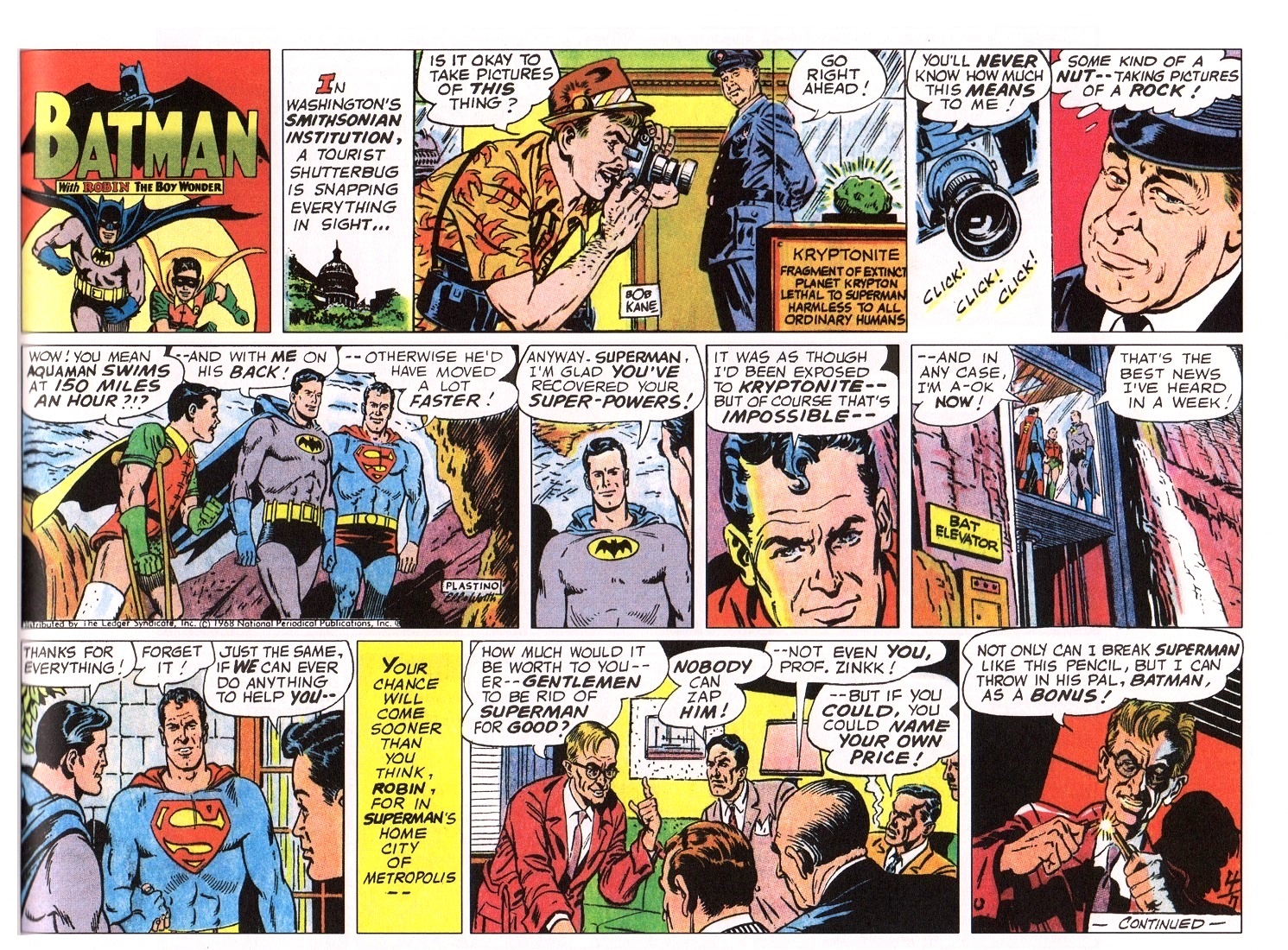 In Eddy Zeno’s excellent biography, Al Plastino: Last Superman Standing (TwoMorrows Publishing, 2016), the writer mentions there was one original art page for the strip that Plastino was proudest of: “The artist felt that he was at the height of his powers and could never part with the above Batman Sunday during his lifetime.”  This is that page as seen in print.

Superman: The Wedding Album (Dec. 1996). Nearly two decades after leaving the Superman comic books, these two pages were Al Plastino’s final work for DC. The wedding issue was a tribute to the characters of Clark Kent/Superman and Lois Lane, and it had contributions by a number of artists and writers who continued the legacy of Superman after Jerry Siegel and Joe Shuster, including Plastino, Curt Swan, Jim Mooney, Nick Cardy, Murphy Anderson, Dick Giordano, John Byrne, Dan Jurgens, Louise Simonson and Roger Stern, among them.