G.D. Kennedy has a bunch o’ advance reviews this morning, leading off with the pun-magnet SEX CRIMINALS!

So, Sex Criminals. Before I dig into this series, a couple of things: Disclaimer 1:  Sex Criminals is not about sex crimes; it is an irreverent and hilarious, often lewd but never exploitative, most assuredly adult comic by Matt Fraction and Chip Zdarsky. Disclaimer 2: this comic may not be for everyone – as you might guess, it has sexual themes and sexual content and sexual jokes, and those might touch on your mores or make you a bit uncomfortable. But, in the end, the driving force of Sex Criminals is to pull sexual taboos into the open, demanding a discourse and forcing the reader to confront their own hang-ups, so maybe personal discomfort is all the more reason to read this series.

Sex Criminals is basically a story about an ordinary girl, Suze, who meets a regular guy, Jon, and their budding relationship. Except for the one thing that sets each of them apart from the rest of the world: When either orgasms, time stops, as in everyone else, everywhere, freezes, and the world becomes an almost extra-dimensional realm that narrator Suze calls “the Quiet.” So for the first 20-plus years of their lives, this meant a strange and often lonely post-coital world, until Suze and Jon meet and realize that they are not alone, and that they can freeze time together.

So what does a young couple who can freeze time decide to do? Rob banks, apparently, but only for altruistic ends, namely keeping afloat the library that Suze works for. Except, by the opening of Issue #5, the plan has unraveled: While robbing the bank in the Quiet, three people clad in all white show up, unfazed by the stopped time and apparently blessed with the same powers as Jon and Suze. Issue #5 opens with our heroes regretting their plan as they sit handcuffed in the back of a van, captured by these three members of, for lack of a better term, the Sex Police. As with so much of the series, the story is non-linear as it weaves between the present, as Jon and Suze struggle to escape, with vignettes of their planning of the robbery, and, maybe most effectively, glimpses of their childhood that form the building blocks of the characters.

I am amazed at Sex Criminals for existing, but the fact that it works and works as well as it does is all the more impressive. Fraction and Zdarsky have taken what should be an idiosyncratic premise and created a much broader story with impressively deep characters, while opening the floor to discussion about proscribed topics in a manner that, despite the surrounding crude humor, is strikingly mature.

On a superficial level, Sex Criminals is a book riddled with sex and poop jokes, and that level works fine, but, by itself, is not enough to carry an ongoing series. Instead, Fraction and Zdarsky use disarming humor and an absurd concept to create a heartfelt story that touches on the burdens and baggage of personal growth and self-discovery, and in particular the very real and often unstated impact that sex can have on this process. This is tackled in an upfront and frank manner; the series makes sex an essential focal point of discussion, rather than eliding over, and in doing so, manages to amplify Suze and Jon as characters, bringing their strengths, weakness, and vulnerabilities into sharp focus. This is maybe most notable through the series’ frequent vignettes of Suze and Jon’s adolescent years, which reflect the challenging path of discovery of sexuality in a world where such is a forbidden subject (seen in Suze’s mother’s avoidance of the topic) that is frequently publicly distorted and without context (reflected in Jon’s discovery of sex through pornography). The result is two endearing and flawed leads struggling to find both their own identity and manage a relationship against their personal deficits, but, even more so, a story that forces a degree of self-reflection and introspection on the reader.

Sex Criminals also deserves credit for its handling of sexually explicit content in a medium that has long been subject to (frequently well-deserved) haranguing for its over-sexualization of women and lack of sensitivity to sexual topics. This book is a welcome affront to this history, as it handles sexuality with respect and openness without ever veering into a realm of cheap and tawdry exploitation.

Other Books I Read This Week:

Prophet #43, Image. Prophet is one of the reasons that I love comic books. The series, a complete re- and de-construction of Rob Liefeld’s 1990s character, is set in the distant future, a high-concept sci-fi story set against the backdrop of a universe still reeling from domination by the autocratic Earth Empire centuries earlier. Each issue manages to meld fully imagined distant worlds and alien species with clever wit and sweet and tender moments in between, without being overpowered by frequent (and never meaningless) action. Issue #43 is no different, with a touching opening told from the perspective of Hyonhoiagn – a tree-like alien – followed by an amusing flashback to Liefeld’s Youngblood team eating at their superhero cafeteria. Certainly, one of the great elements of this book has been the artist collective mentality behind it – while principally the brainchild of Brandon Graham and Simon Roy, a rotating cast of writers and artists (six credited for Issue #43 alone) keep the story fresh and pushing at boundaries of mainstream comics. Sadly, it will be ending with Issue #45 (to be followed by a brief mini-series), but I promise to keep pushing it on you until then.

“Noah,” Image. Darren Aronofsky is a great director, no question.  From “Pi” onward, his films have been, at the least, unique and thought-provoking, steadily growing from rough independent work to polished feature films. The crux of his best works has always been that they are character-driven. Which makes Aronofsky’s graphic novel “Noah,” based on an early script for the forthcoming film of the same name, such a disappointment – the characters are flat and uncompelling, and the story itself is predictable (and we’re not talking about the flood). Artist Niko Henrichon deserves credit for offering the only bright spots to this book, but this GN as a whole is entirely self-indulgent and unnecessary. 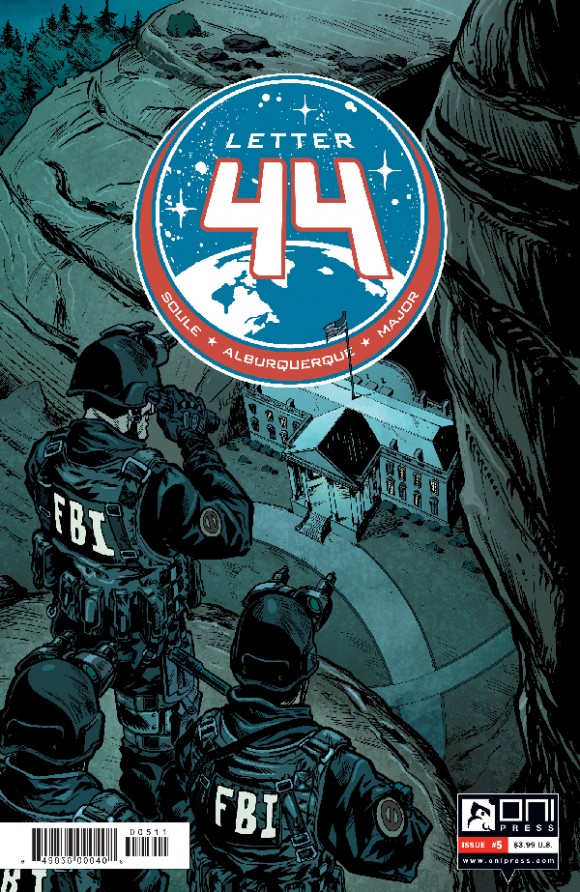 Letter 44 #5, Oni Press. Letter 44, by writer Charles Soule, is an interesting book, a combination of real-life political intrigue set against an unknown alien menace. The narrative follows two plot-lines, one, the newly elected president of the United States, who has just learned of the country’s greatest secret, namely a strange alien object being built at the ends of our galaxy, and the other story, an expedition to investigate the device. Issue #5 opens with the expedition’s first contact — a rude introduction — while, on Earth, President Blades handles back-stabbing by his interim chief of staff.