ADVANCE REVIEW: THOR #1 — She is Worthy!

NO SPOILERS! The book is out 10/1 and here’s your advance review! 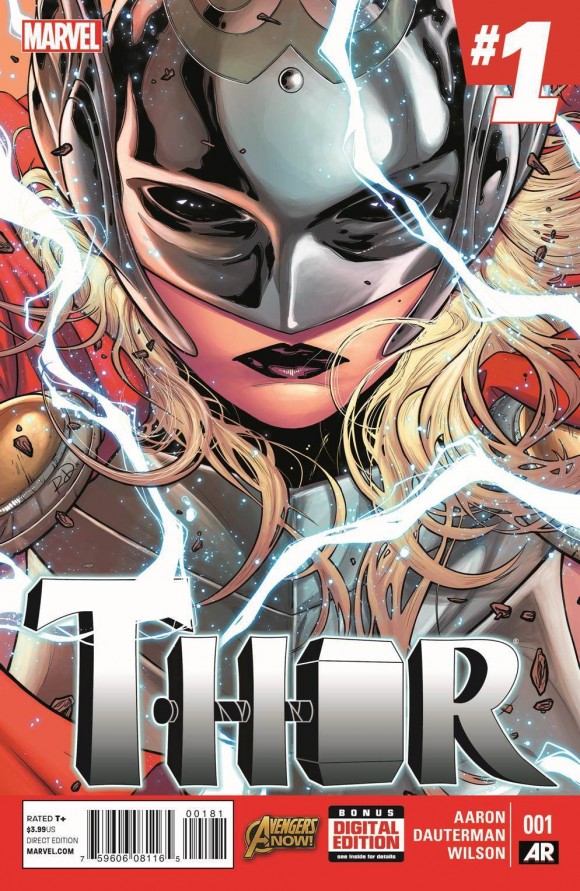 The hype and media coverage has died down and now it is time to finally discuss the issue at hand. The problem with ultra-hyped books like Thor #1 is that there is so much discussion, debate, and fan angst over such a drastic change in direction that when the book finally comes out, many fans have already pre-judged the final product. They make snap judgments based on ideology and expectations that the work itself is often overlooked. Anyone who dismisses Thor #1 as a publicity stunt or a clumsy attempt at pandering to diversity is only hurting themselves.

Before all this Thor-becoming-a-woman hoopla hit, Jason Aaron was absolutely killing it on Thor: God of Thunder. Aaron’s take on Thor and his world was as epic as it comes; it was like a Slayer concert with Jack Kirby on bass. But rest assured, despite the renumbering and despite the hype and Asgardian gender swap, Aaron’s Thor is still the stuff of legend. The issue is a stage-setter, as first issues tend to be, to set things up post-Original Sin. This is really the first chance Aaron has gotten to write the recently resurrected Odin and he quickly finds the commanding and arrogant voice of the character. Aaron sets up many plot threads from the power struggle between Odin and Freyja, to an invasion of Earth by some very familiar Asgardian foes, to the continued involvement of Roxxon. All the plates that Aaron set spinning in God of Thunder continue here as Thor struggles with his power loss.

The art by Russell Dauterman is fitting to Aaron’s epic story. He channels a sort of Frank Quitely vibe and renders Thor’s world as skilled as some of the great Thor artists of years past. I can’t compare him to Simonson, Kirby or Buscema after one issue, but a few more issues like Thor #1, I can and I will.

Forget the hype, forget the controversy and teeth gnashing, this issue simply is another chapter in Aaron’s soon-to-be-legendary run on Thor. It doesn’t matter what gender the hammer wielder is as long as we have craftsmen as skilled as Aaron and Dauterman to tell his or her tale.