The third installment of Dark Horse’s The Strain trilogy begins Wednesday 8/20. Here’s what the last chapter of the series has to offer.

The Strain is an aggressive response to the romanticized obsession with polite horror that has populated pop-culture over the past decade, the anti-Twilight and True Blood, as it replaces coifed, beautiful and sensual vampires involved in good-natured and saccharine violence, with visceral, brutal and unforgiving monsters, with a character-centric focus that highlights the gravitas of the vampires’ actions.

The irony is that, in the course of this response, The Strain has become a sort of infinite regression of pop media, starting with a trilogy of books by Guillermo del Toro and Chuck Hogan, which morphed into a comic series by David Lapham and Mike Huddleston, and in its most recent (and final?) iteration, rears its head as a television series on FX.

It has become a piece of accidental post-modern performance art, a narrative about change, mutation and rebirth that itself continues to experience its own metamorphosis, each version slightly different but still abundantly the same, as it meanders through pop evolution, screaming to reach the final stage, which can only be a traveling on-ice spectacular replete with puffy white vampires and waggling rubbery tongue appendages. 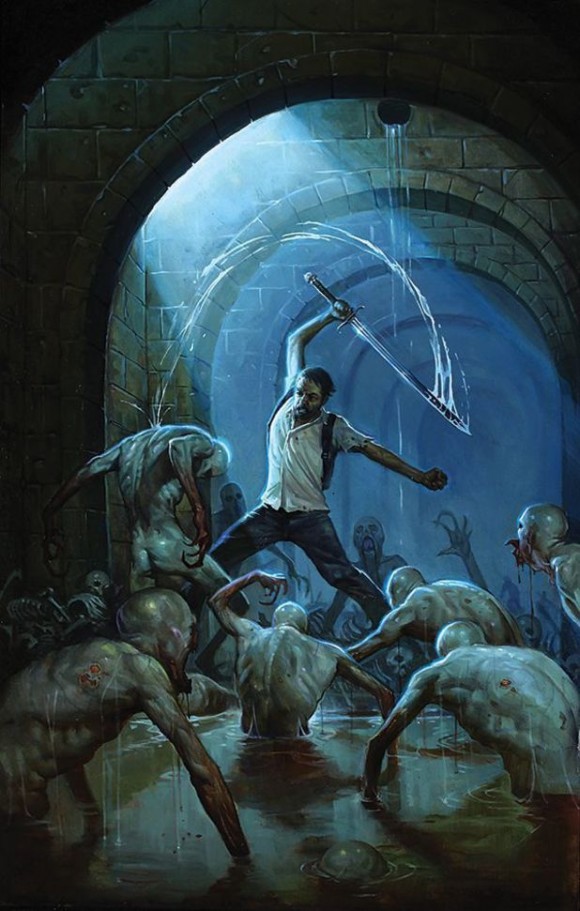 While the books have reached their conclusion and the television show is in its still nascent stages, the comic series is entering its third and final act, which represents a substantial departure from the prior two. With that said, television devotees should be advised that this may contain spoilers about the future of the TV series (but not the comic), so read at your own peril, but don’t say you haven’t been warned.

For those unfamiliar with the series, The Strain is an attempt to modernize the vampire genre, melding traditional elements of vampiric lore with science. In the world of The Strain, vampirism is a virus, with patient zero being the head-vampire, the Master, who transmits the infection through parasitic worms that kill the host while forcing the body through abrupt physical metamorphosis. The result is a host, subject to the Master’s control and driven by a bloodlust in an almost zombie-like fervor, feeding through a lengthy tongue-like appendage. But the vampires also retain certain base elements of their humanity, namely an innate desire to return to the host’s loved ones, if only to drink their blood and turn them as well. These vampires are not pretty or sensual, but are the horrific, savage and violent creatures of disturbed nightmares.

The first two installments – The Strain and The Strain: The Fall – follow the early stages of a vampiric outbreak in Manhattan and the surrounding boroughs, as the Master is flown into the United States in the cargo hold of a commercial airliner by an infirmed and aged billionaire with ambitions of immortality and a complete disregard for human life. But after the plane lands, it becomes apparent that something is terribly wrong as it sits silently on the tarmac; soon, we learn that all but four people inside are mysteriously dead. This is the beginning, as the dead come back to life, spreading the deadly virus throughout New York, while the four survivors begin to undergo severe mutations. Over the following weeks, the plague spreads while a campaign of disinformation serves to confuse the media and the public as to the exact nature – and scale – of the outbreak, all exacerbated by political corruption that subdues any substantive response to the epidemic.

The Fall ends with the Master’s plan reaching culmination, as he sends the world into perpetual night through a nuclear winter that begins with six power plants melting down across the world. This leads to a global nuclear war, from which the Master arises with undisputed control over the world, his millions of vampire spawn keeping the remaining human population in check. This is a world that is unrelentingly bleak, with people kept as a mix of livestock, sufficiently placated by the constant threat of danger that they, without resistance, live side by side with vampires who at any moment may turn them into dinner, the only respite being a few hours of sun each day.

The Night Eternal follows our surviving protagonists from the first two chapters, Dr. Goodweather and Dr. Martinez – former members of a CDC response team – and Vasilly Fet, an exterminator whose deep knowledge of vermin has proved invaluable in navigating the vampires’ world. Martinez and Fet now spearhead a quiet underground revolution, scouring the world for answers on how to eliminate the scourge of the Master, while Goodweather primarily wallows in self-pity about his lost family, inadvertently undermining and endangering Martinez and Fet’s efforts, though certainly with redemption in his future. Interspersed throughout are scenes from millennia past, which offer glimpses of the Master’s origins, a tool that has been used throughout the series. 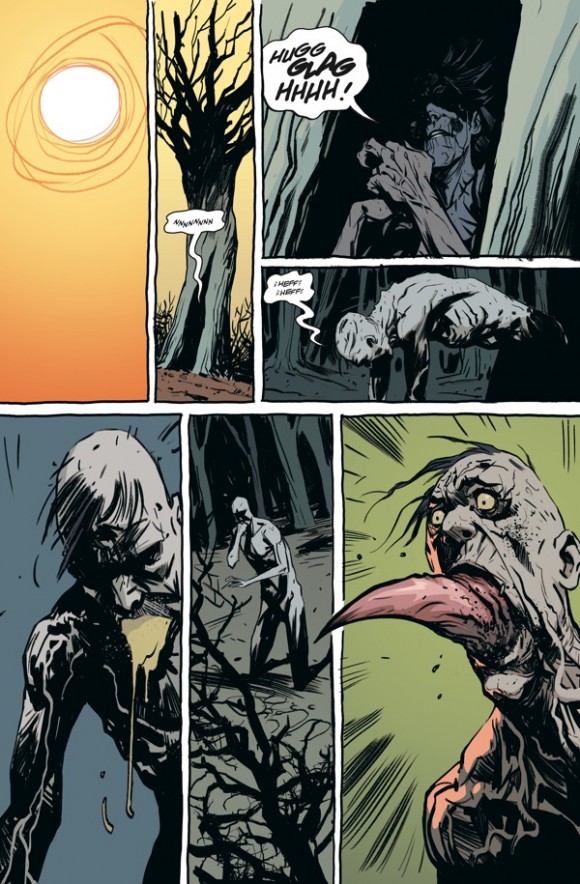 The Strain as a whole is an ambitious concept, attempting to modernize ancient parables by bridging the gap between science and unexplainable magic, while juggling themes of corporatism, greed and corruption, media manipulation, acquiescence in the face of evil, and the placation of the masses, substantially paralleled with the Holocaust. There is no question that The Strain is haunting and at points terrifying, with a horrific breed of vampire that is pulled out of the realm of magic and into a modern-day conceptualization of science, translating an old source of dread into something that makes sense in the present world without the veil of history to assuage the reader. These elements are all the more apparent in The Night Eternal, with Huddleston’s artwork creating a bleak and desolate world that offers few glimpses of hope.

But The Night Eternal also appears poised to escape some of the trappings of the first two chapters, which at times became so overloaded with different themes that the narrative was subsumed, with characters and scenes becoming more metaphor than anything else, creating an often muddied account and requiring a willful suspension of disbelief (and occasionally a grain of salt) that distracted from the story. While I imagine that Lapham’s purpose was to highlight the ambiguity and confusion arising in the early stages of an outbreak, the story’s narrative focused so squarely on our protagonists that the experience of the public at large became confusing.

The result was often a feeling that the story was rushed, and that more time spent exploring the world during the collapse would have served to develop the series more effectively. Aptly and believably portraying the transition of society in the midst of mass collapse is no easy feat and Lapham strove admirably to this end, but by shifting to two years in the future, The Night Eternal escapes this daunting burden as, through only the first couple issues, it is abundantly clear that the last chapter will be a more focused tale. Lapham firmly establishes from the get-go what the post-apocalyptic world looks like, and the populace’s reaction to this.

While the first two chapters had an increasingly ominous feel, the world created by The Night Eternal is abjectly terrifying, presenting a haunting world of darkness where our heroes are persistently on the run and the human species is on its knees. With these structures in place, the narrative is able to flow more freely while seamlessly incorporating the principle themes into the story. The Night Eternal is poised to offer a promising post-apocalyptical tale, with a glimmer of hope for salvation, and maybe even redemption, while at the same time providing a disturbing contrast between the Master’s totalitarian state and the broad reach and ever-present effect of present day corporatism over everyday life.

Undoubtedly, the first issues of the final chapter suggest that it will set the high water mark for the series, which to date has been an engaging and haunting, if at times flawed, installment in the genre of horror comics.