HOLIDAY HOT PICKS #9: DC Collectibles’ new line is off to a solid start. 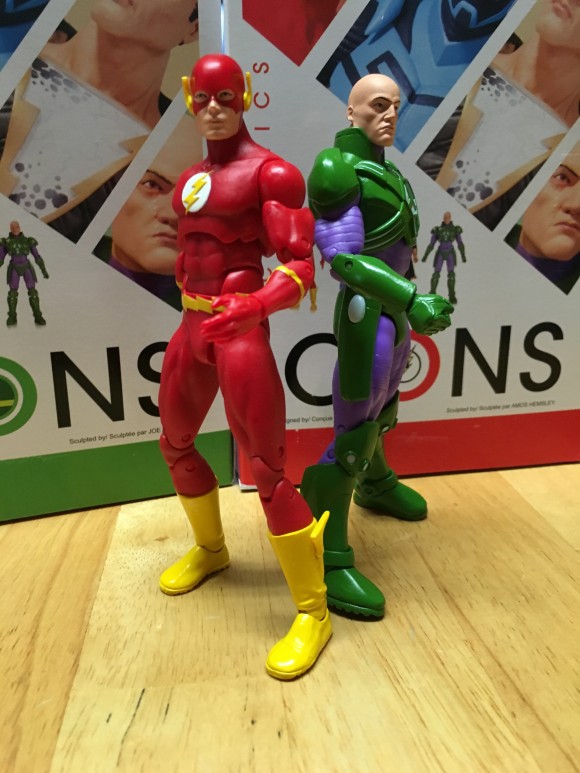 One of the things DC did to signal that the New 52 was for real was focus action-figure output almost exclusively on each character’s new design. There was a uniformity to it all that put in hard, 3D form what we were reading on the page. This was a tangible merchandising message that DC was serious about this. After all, why devote all the resources necessary for such an undertaking — the designing, engineering, sculpting, tooling, etc. — if you were going to flip the switch back in a year?

DC Collectibles produced dozens of figures before branching out a little with the Greg Capullo collection, which in itself is a subset of the New 52 line. But finally, last winter, the in-house manufacturer started to shift with the announcement of the Icons line, designed by A-List artist Ivan Reis but with characters in some of their more classic appearances.

The conceit of the 6-inch-scale Icons line is that each figure — Wave 1 featured Batman, Green Arrow, Deadman and Mister Miracle — is emblematic of a specific story or title. That’s really window dressing, though it does subtly emphasize that this Oliver Queen is not going to be wandering into your comics any time soon, at least not on a regular basis.

It also shows that DC is feeling secure that its audience has accepted the New 52. As with Convergence, the publisher is confident enough — or maybe shrewd enough — to start embracing its past again beyond the steady stream of reprint paperbacks and hardcovers.

Wave 2, which is due in comics shops by the end of December, will feature Blue Beetle, Black Adam, the Flash and . Now, I personally have no interest in the first two. I prefer Ted Kord Blue Beetle and we got a very similar Black Adam in the New 52 line.

But I was really eager to get an up-close look at the Flash and Lex Luthor: 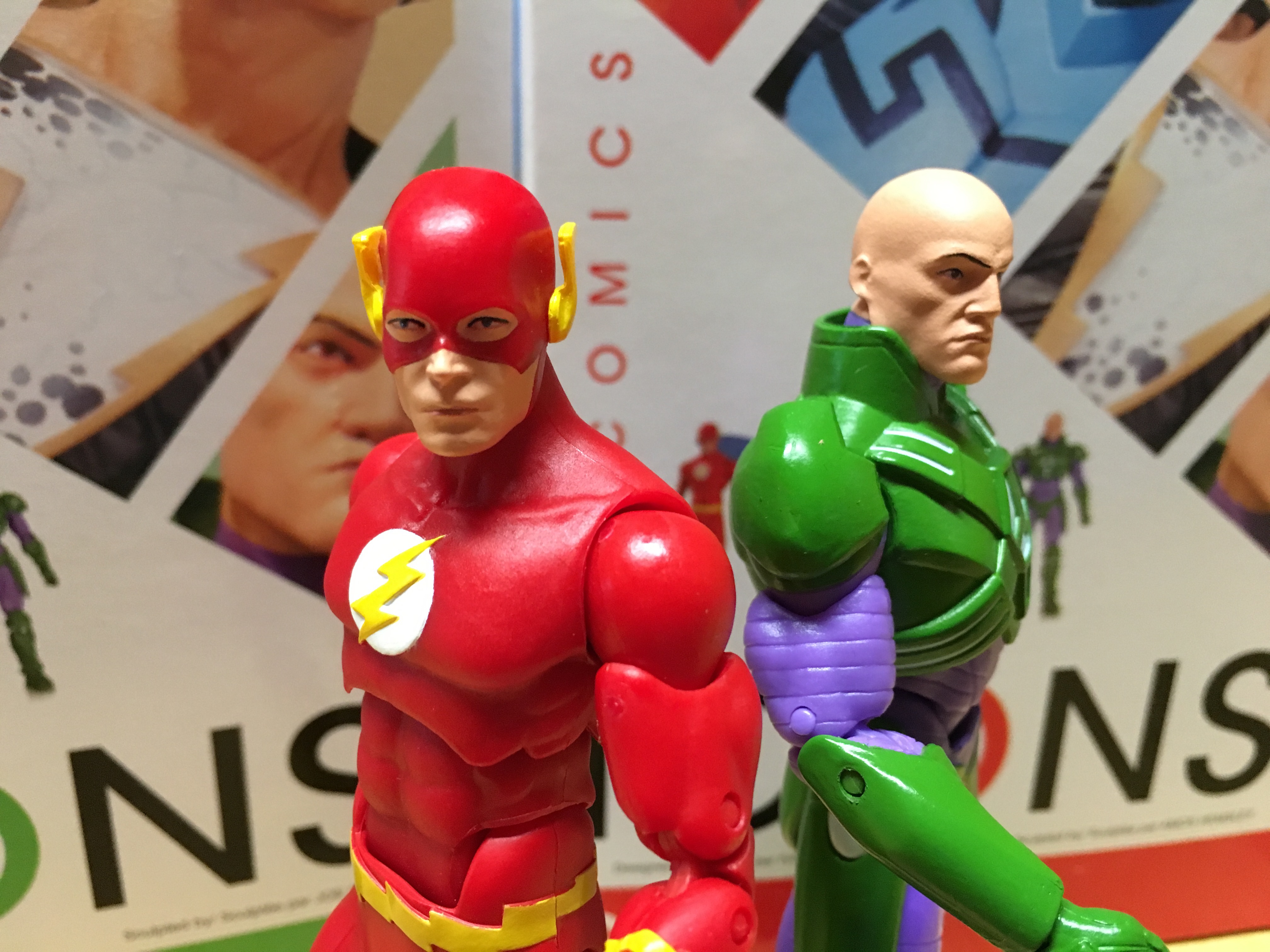 This is a killer action figure. I didn’t really own a Barry Allen-style Flash with this kind of articulation. I was never all that big on Mattel’s DC Universe Classics line. There was some great stuff there, to be sure, but a lot of it left me cold. All things considered, I prefer DC Collectibles (and its precursor DC Direct) because of the heft of the figures and the more comics- or artist-accurate designs.

But DC Collectibles has never been at the vanguard of articulation. It’s a trade-off I’ve been willing to make but that doesn’t mean I’m not excited about the prospect of a line of figures with greater poseability, as is the case with the Icons line. (The level of articulation in the line has been a point of excitement for a lot of collectors.) 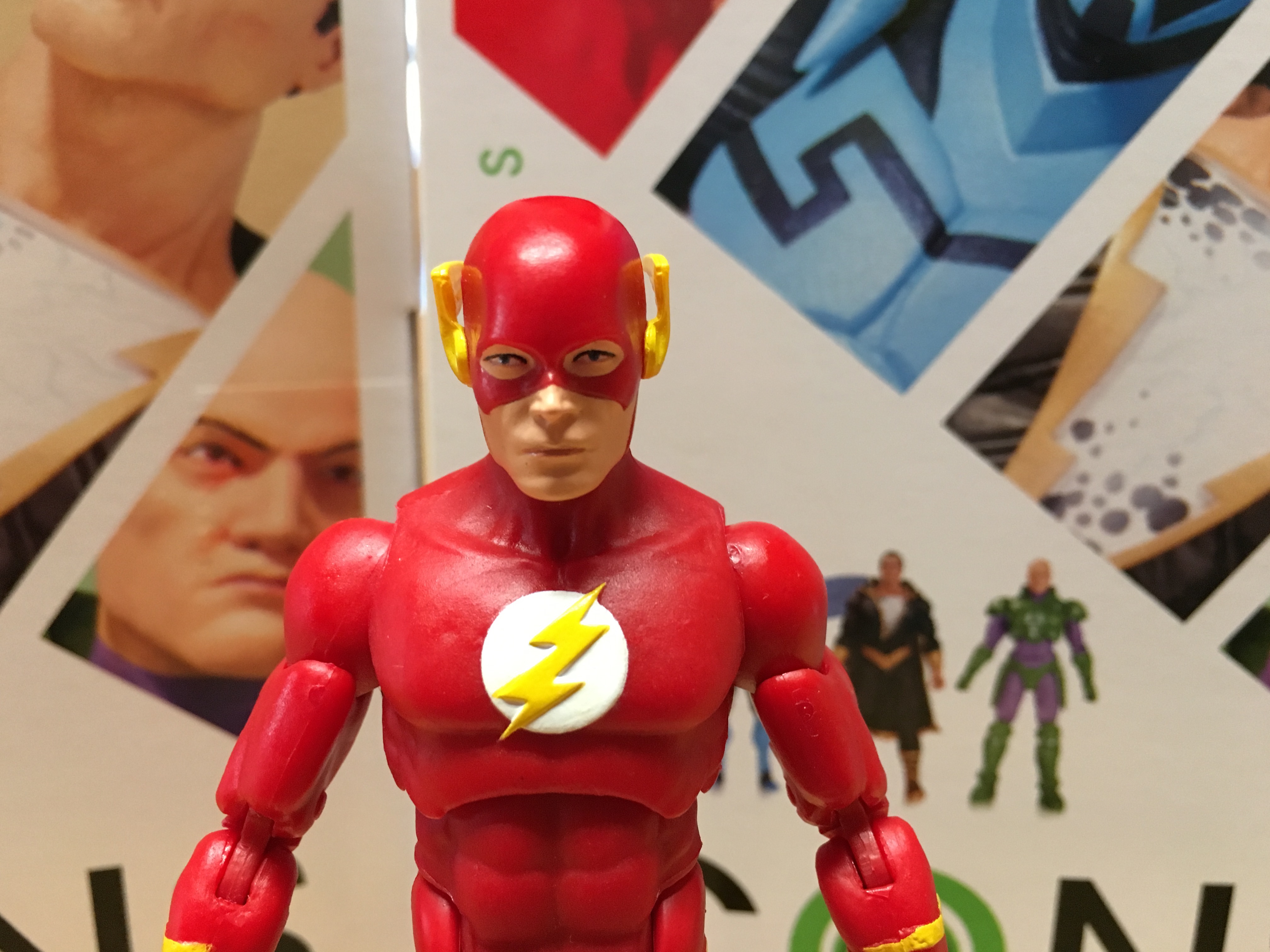 The Flash in particular is one of those figures you really want to be able to pose this way and that. You can have Batman crouch or look stolidly from an imaginary rooftop but the Flash has to be moving, legs churning, arms pumping, hands slashing.

Now, we have that in a beautifully designed figure. The Flash is tabbed as part of the Modern Age storyline Chain Lightning but don’t kid yourself: This is a plain ol’ classic Silver Age/Bronze Age Barry Allen Flash.

And, holy crap, he comes with a Cosmic Treadmill. And interchangeable hands, including a pair suitable for sprinting. For $25. 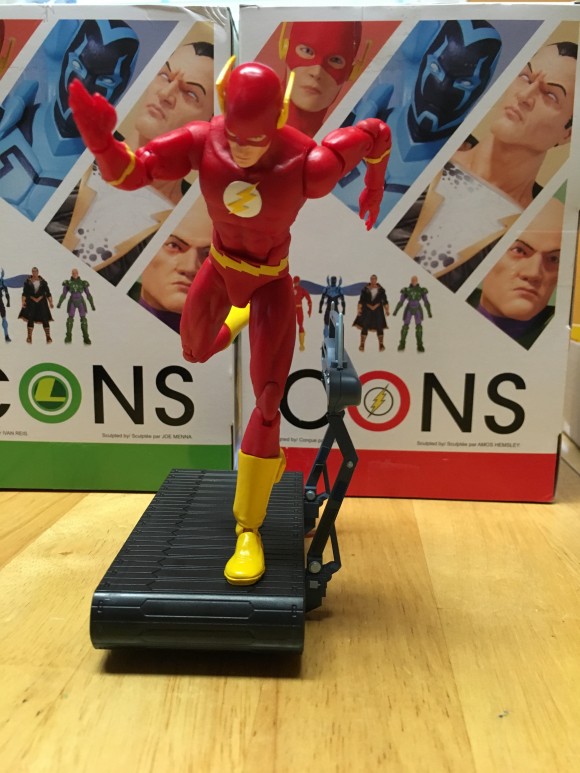 Yes, he holds this pose. You have to work it some but you can get there.

This is one of the best bargains of the year.

I love that DC Collectibles has managed to keep prices low with their recent run of figures, whether it be Icons or, for another example, the Batman animated line. I’m not entirely sure why that is, though I do have to say that the plastic in the Icons line looks and feels much lighter than what we’ve been accustomed to from DC Collectibles.

I could be completely wrong about that. I’m not an expert in plastics. But it only slightly takes away from the look of the figure. And given everything you get, that’s First World moaning. 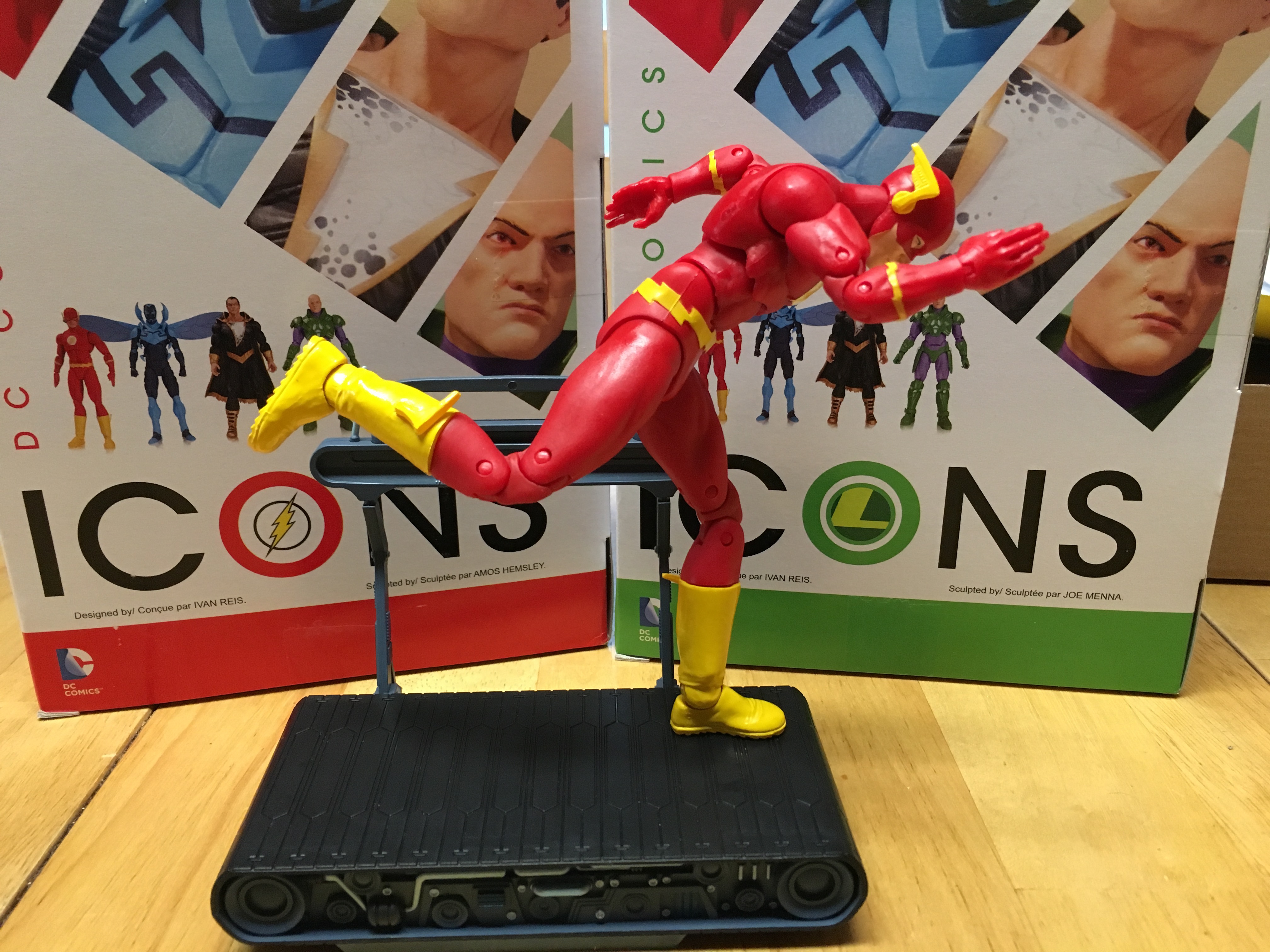 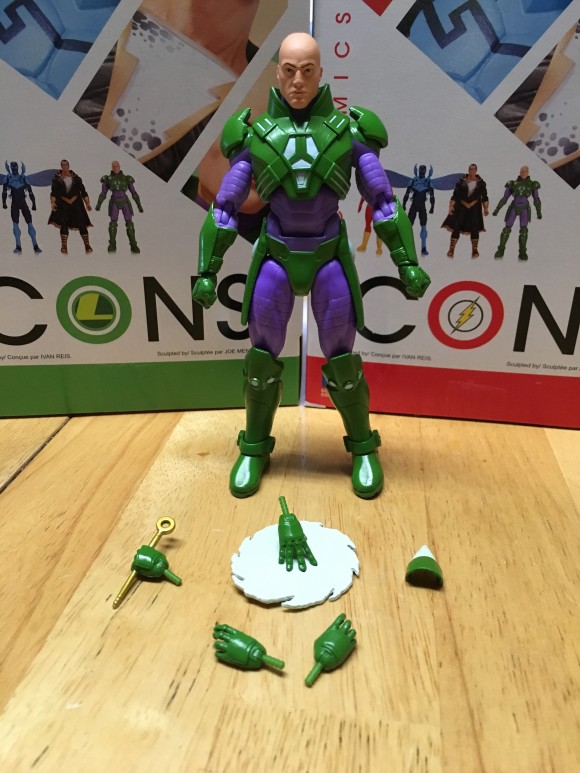 Lex Luthor has long been underserved on the action-figure front, going all the way back to the Mego 8-inch line of the Bronze Age, from which he was absent.

Super Powers did him right. Justice League Unlimited did too. Toy Biz did not. But those are smaller-scale figures.

On the standard front, the Lex offerings seemed either too bland, too busy or overly muscled. 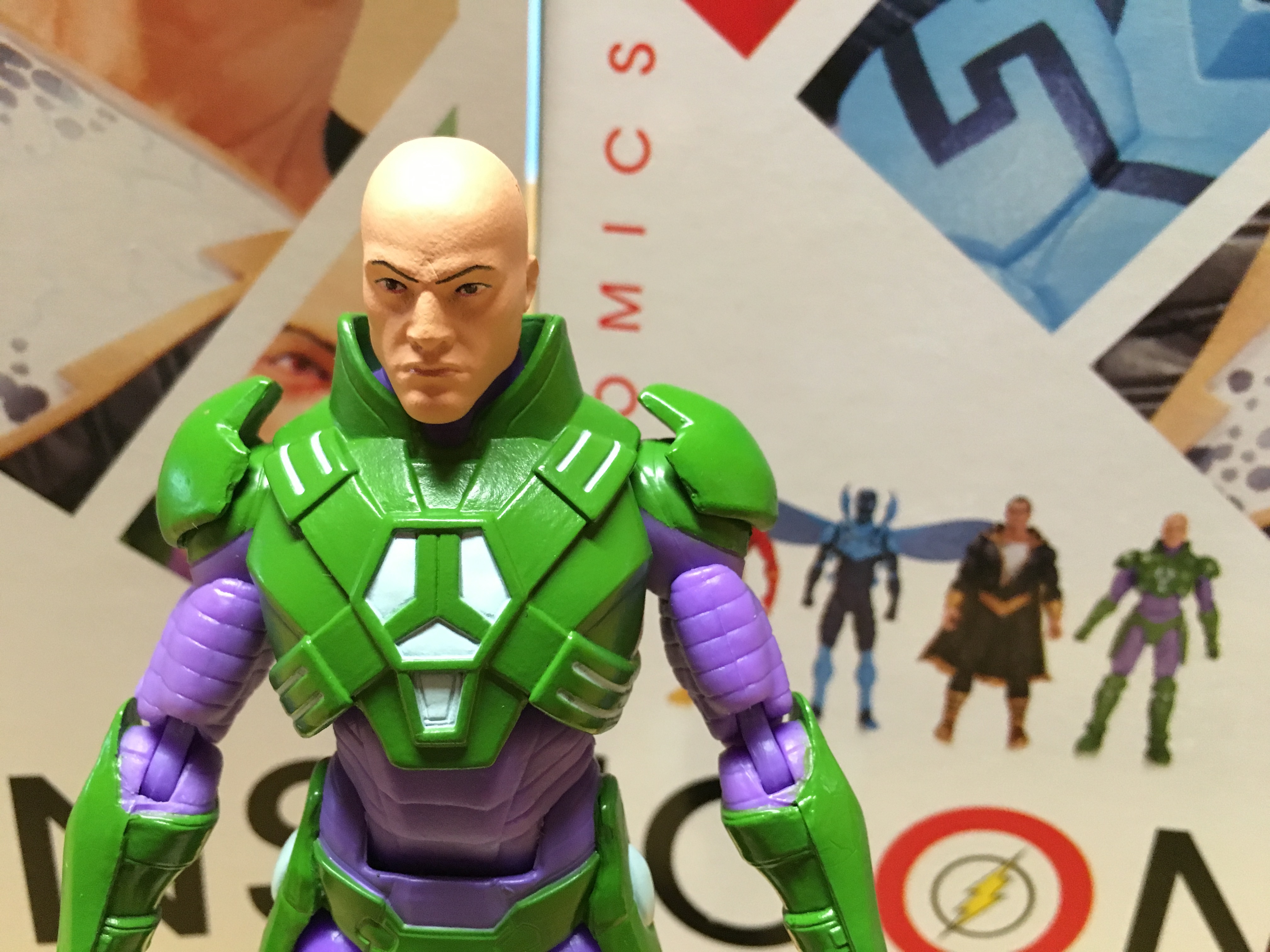 Not anymore. If you’re going to put Lex in a battle suit, this is the way to do it. This is Forever Evil/New 52 Lex, and this version is much sleeker than what we’ve gotten in the past.

Lex comes with various accountrements, including hands that mimic various powers, as well as tools for venal villainy, like this shank. 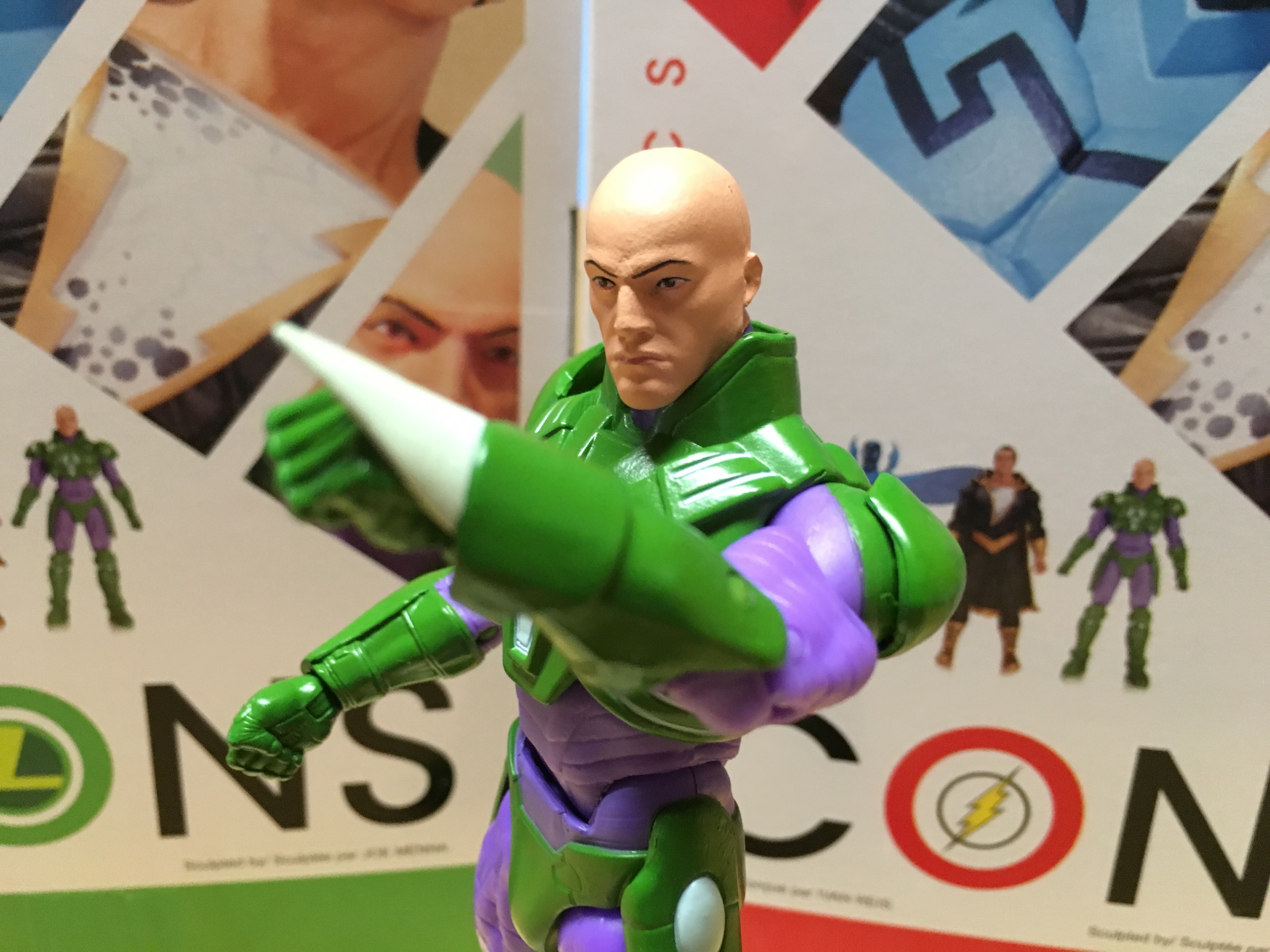 I’m a Put Lex in a Three-Piece Suit kind of guy, but if you’re going to put purple-and-green armor on him, this is the way to do it.