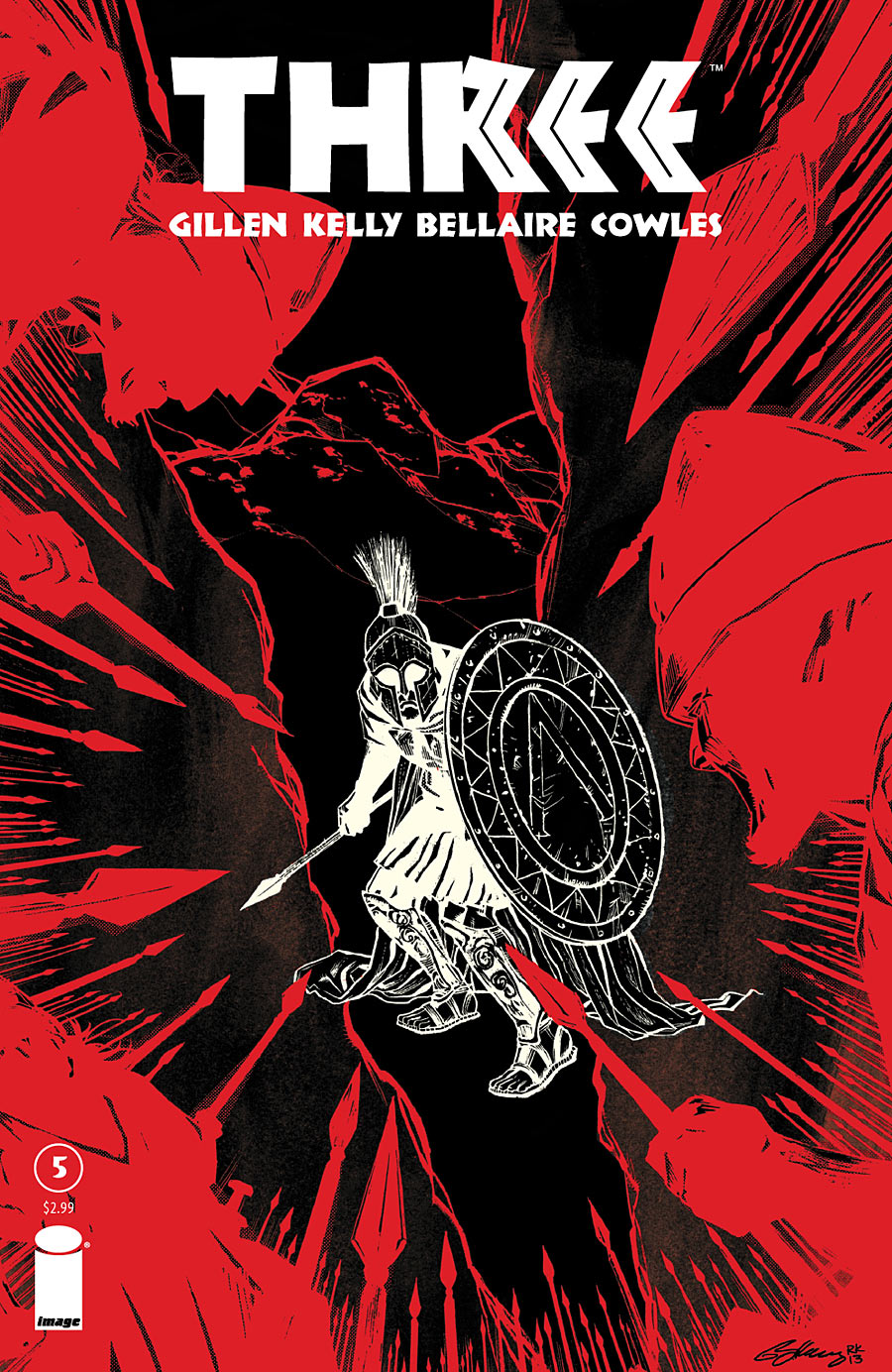 In 1998, Frank Miller brought Sparta into the comic consciousness with “300,” ostensibly a historic retelling of the Spartans’ ill-fated battle at Thermopylae, where 300 outmanned Spartans stood against the advancing Persian army of Xerxes.

Like so much of Miller’s work, “300” is graphically stunning, filled with oversized images in Miller’s signature architectural style. But, like much of his later books, it is superficial and violent, glorifying the Spartans as noble warriors without further dimension. In short, Miller’s tells a tale of Sparta’s warrior class that, while a classic in its own right, has been roundly criticized for its historical inaccuracy, or, at the very least, its myopic depiction of Spartan life.

Kieron Gillen’s mini-series Three — with art by Ryan Kelly and colors by Jordie Bellaire — is a direct, if belated, response, and where 300 was so much superficial style, Three is substance, as Gillen’s work is steeped in historical research, an effort to accurately reflect broader Spartan society and not simple veneration for its warrior class. 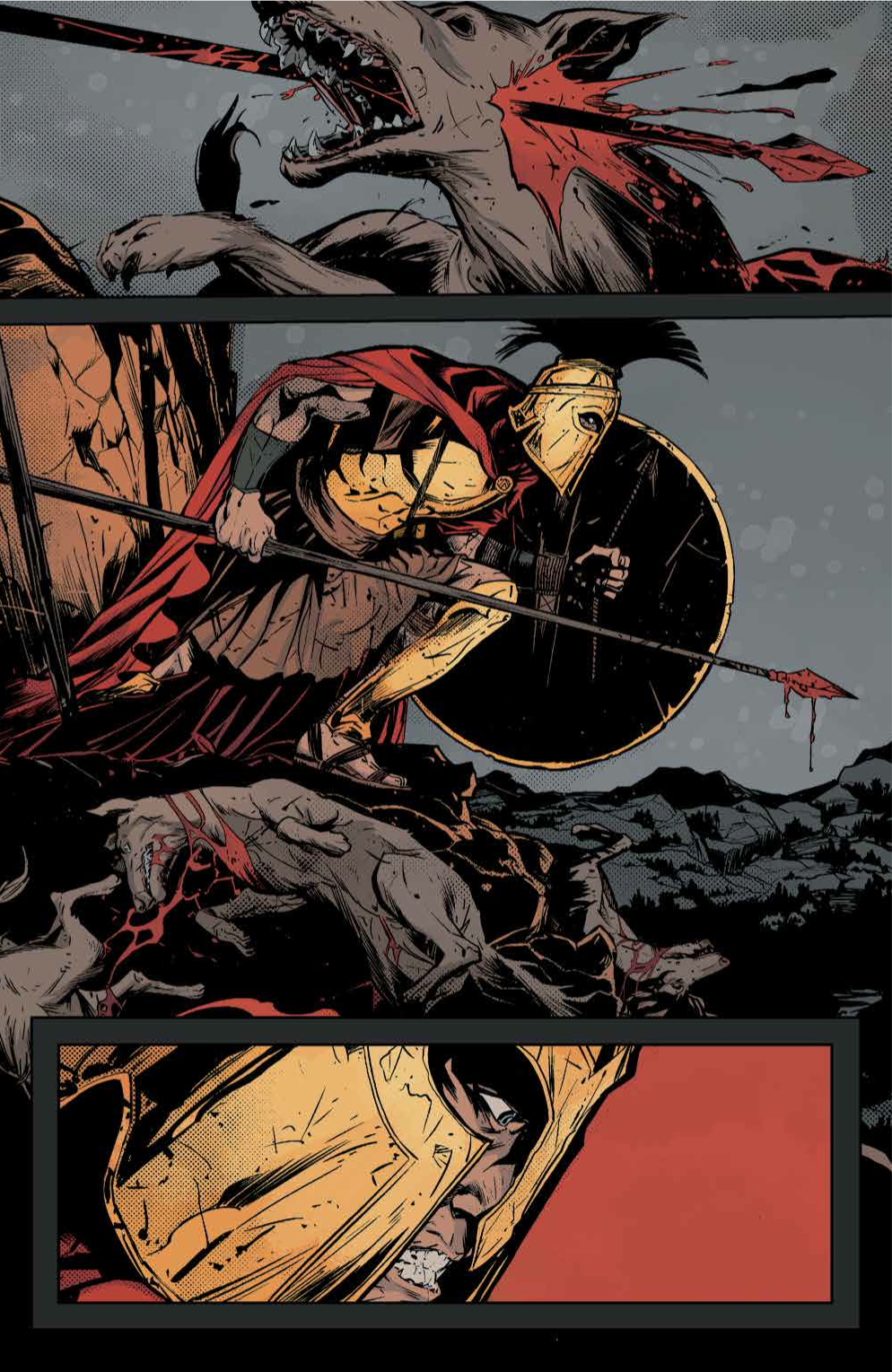 Gillen does this by recasting the story of Sparta as not only about its warriors, but its entire population: He brings into focus Sparta’s slave class – the hedots – who comprise the vast majority of Sparta’s population, and were conspicuous in their omission by Miller. In doing so, Gillen adds dimension to Sparta’s warriors, showing them not only as fearless in battle, but also as a class whose ruthless tactics carried into everyday life; this is perhaps best captured in the series’ opening issue, when a group of young warriors engage in the Krypteia, a ritualistic culling of the strongest hedots to ensure social stratification through instilling fear and eliminating potential threats.

Issue #5 is the final issue in Gillen’s mini-series, which takes place a century after Thermopylae, with Sparta having lost significant land and people to neighboring Thebes. The story follows three hedots who are fleeing to freedom in neighboring Messene after their town was slaughtered by Spartan warriors for a paltry insult. By issue 5, they have fled across Sparta, being pursued by a host of Spartan warriors, ultimately being tricked into a dead-end ravine, where they are trapped.

The issue is tense as the characters attempt to make a final stand against clearly insurmountable odds, and a true battle for the freedom that Miller’s story exhorted.  The issue moves a good pace, holding tension throughout the battle scene, as well as the brief interludes in between. One of these interludes is a fantastic monologue by one of the hedots concerning the battle at Thermopylae, and for all of the glory bestowed on each fallen Spartan warrior, there was a fallen hedot beside him; it is the perfect counterpoint to ironic speeches about the “freedom” of the Spartans in “300.”

Other Image books I read this week:

Black Science No. 4 and Dead Body Road No. 3

Black Science and Dead Body Road are maybe two of the most conceptually disparate titles on the market – one, an inter-dimensional sci-fi romp, the other a realism-grounded crime drama.  What ties these two titles, though, is the exceptional artwork of Matteo Scalera.  In Black Science, he creates fantastical alien landscapes and characters which are, alone, worth the price of the comic; in Issue #4, he renders a new world as the book’s heroes have a moment of respite at a strange hotel.  Dead Body Road is diametrically opposed, a dark and gritty noir drama, which Scalera brings to life with his stylized renderings of seedy motels, bar brawls, and misfit characters.

Rat Queens is a vibrant fantasy book about a team of four female adventurers stirring trouble in the city of Palisades. The best description of Rat Queens is that it is fun: The characters are entertaining and witty, with each of the four leads incredibly distinct, charming and neurotic in her own right, but the four as a whole displaying a great chemistry. Issue #5 ties up much of the first arc, while offering some insights into the characters’ background as they let their hair down.