Our Mr. Image is back with an urgent plea to get you to read Think Tank from Top Cow/Image:

Think Tank is one of the best series out there, and you’re probably not reading it. Maybe you missed it because it flew under your radar, or maybe you adhere to the fallacy that comic books must have spandex and cod pieces. Or maybe you don’t read it because it’s too thought provoking, since pulling back the veil on the unholy miscegenation of science, government and private enterprise isn’t escapist enough for you.

I don’t care what your reasons are because you are entitled to them, though you are missing out. I do care, however, that your ambivalence to this series has threatened its future: Because of low sales, the series is going on a temporary hiatus after issue 12, with the hope that changes (i.e., restarting with issue 1, colorizing new issues) will draw in a broader audience on its return. 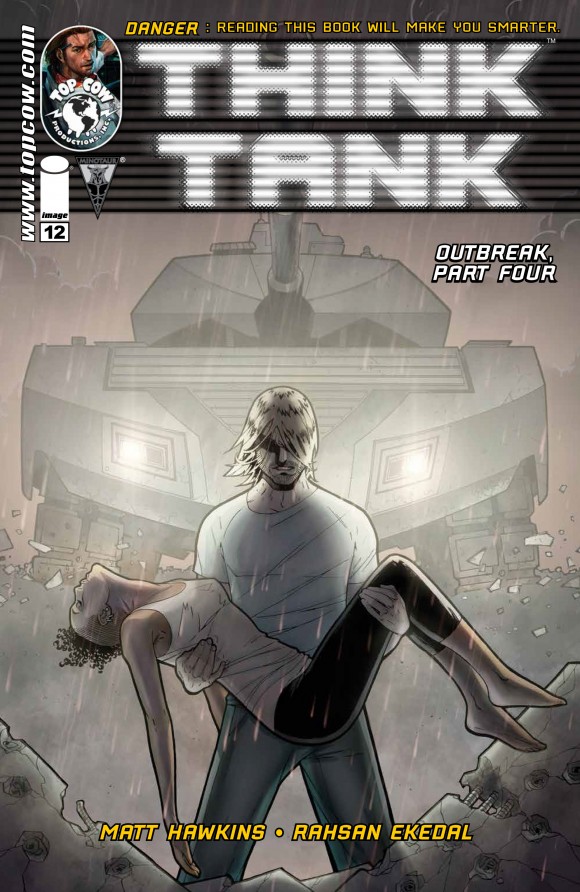 If your interest is piqued and you’re saying, “What is Think Tank?”, it is a story about Dr. David Loren, a scientific prodigy recruited in his teens by the U.S. military. He gets a free ride to college, only to then be sequestered away in a military research facility, watching years of his life disappear in a miasma of weapons development and the resulting tactical strikes, which Loren witnesses remotely through the cold gaze of a video camera. Loren is brash and arrogant and emotionally underdeveloped, but, as the series unfolds, he is forced to face the brutality of his creations and reckon with his life’s work.

Think Tank is more than a story about a reforming weapons developer. It’s a thoroughly researched book (each issue has an appendix) that scours the dubious actions of the military industrial complex. Its tenor may be best summarized by the epigraph to issue 12, a quote from Abraham Lincoln: “I see in the near future a crisis approaching that unnerves me and causes me to tremble for the safety of my country.”

Despite these themes, the series refrains from preaching, instead serving to open a floor for debate. But while the subject matter is weighty, co-creators Matt Hawkins and Rahsan Ekedel keep an air of irreverence to the story, refreshingly adding their caustic wit so that the heavy themes never become oppressive.

Issue 12 picks up with Loren alone in Shanghai, having escaped from his military handlers with the knowledge that a biological weapon he created – a highly fatal viral agent that can target people based on their ethnicity – is on the verge of being used to deadly ends. 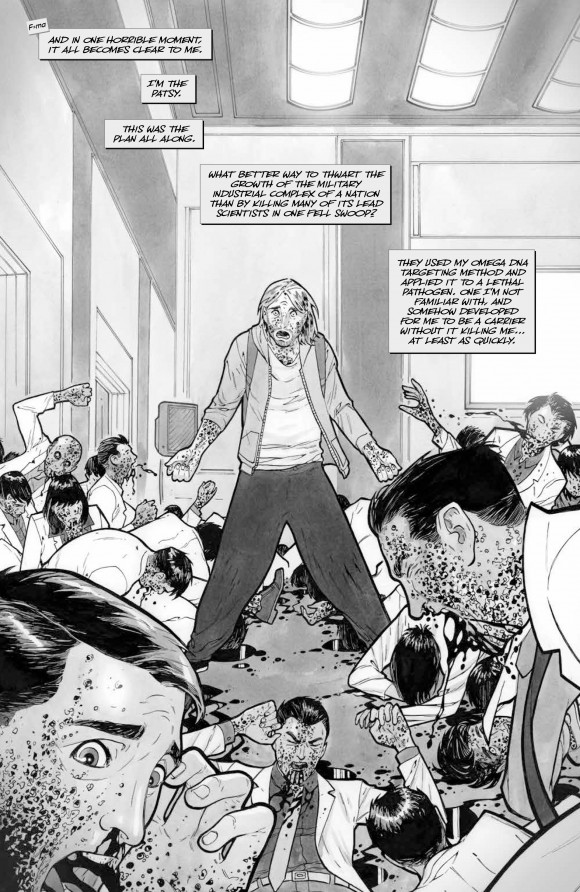 Unbeknownst to him, this agent has just been used to assassinate the U.S. President, and the first tentative shots of what may be the next World War have been fired off the coast of Taiwan.  This issue is the culmination of a number of plot lines, satisfactorily closing the series’ first “season” (as dubbed by Hawkins) while leaving a clean palate from which to jump off into the second.

If you haven’t read the rest of the series, I highly recommend picking it up.  If you have, this issue will serve as a satisfying wrap-up until Think Tank returns. In either event, you should be reading this series; it deserves far better than to be endangered by sales figures.

Manifest Destiny #4: Manifest Destiny is writer Chris Dingess’ retelling of Lewis and Clark’s trans-continental journey, in which the pair were sent not to explore, but to secretly exterminate monsters roaming the uncharted wilderness. This is a fun series with a cast of well-rounded characters. Issue 4 introduces us to Sacagawea — who, apparently, is an expert at killing minotaurs, a fact frequently omitted from history books – and hints at an even broader purpose to the expedition.

The Fuse #1: The Fuse is a futuristic buddy-cop book set in a massive space-station orbiting Earth. The first issue suggests promise – the art offered some memorable panels – but the characters at times feel stilted and unrefined. This series will benefit from development over time.