The series, a progenitor to the recent wave of science-themed comics, is a strange brew of science, existential meanderings, action, and comedy, all of which writer Jonathan Hickman has deftly weaved together to create an entertaining and completely original work. 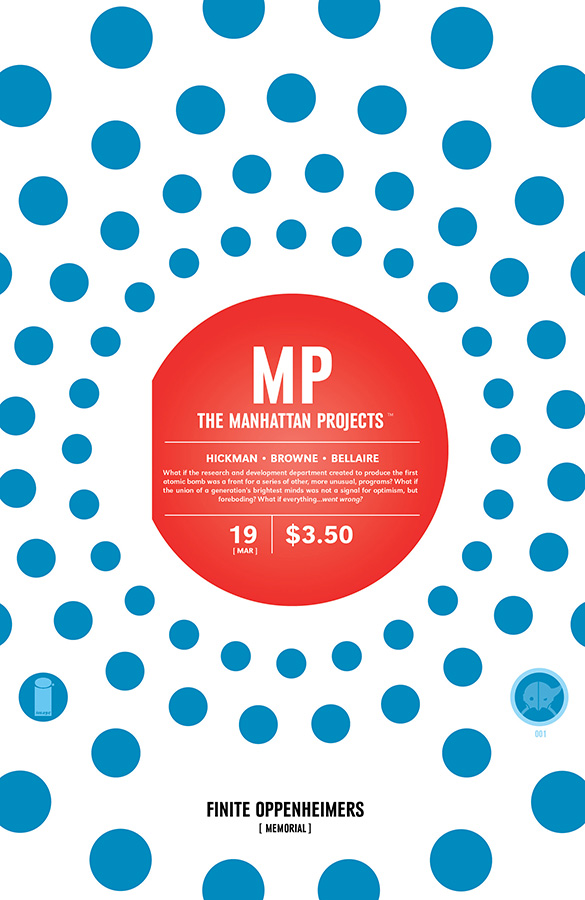 The Manhattan Projects is Hickman’s historical re-imagining of the 1940s Manhattan Project, a meeting of the world’s greatest minds to create history’s most devastating weapon. In Hickman’s world, creating the nuclear bomb is simply a feint, hiding the greater ambitions of a rogue general and the scientists whom he has recruited to test the boundaries of science, ostensibly an effort to offer the United States military dominance in World War II, but in truth a broader endeavor to secure and promote national and global security, extending across decades.

In talking about The Manhattan Projects, it is impossible to avoid touching on the principal themes underlying this work, namely the concept of binary opposites, and the often overlooked gray in between these polarities. This appears throughout the series in the theme of truth and falsity, reflected in the very duplicitous auspices under which the projects are conducted: From the masks that characters wear – Harry Daghlian, the gentle giant, portrayed as a terrifying post-nuclear glowing skull; Enrico Fermi as the alien disguised as a human; or Yuri Gagarin, the hulking cosmonaut who, when space-suit is removed, is a spindly frail character – to the notion of nation-state boundaries.

And then there is the very tagline for the entire series:  “Science. Bad.”  This of course sets up the idea that science – rational, numerical, grounded in fact – is diametrically opposed to the “Bad,” a world of irrationality, chance, unpredictability, violence, and that scientific progress is necessarily an arc progressing away from “bad.”  But even in setting up this contrast, it toys with the notion that binaries are not as juxtaposed as an initial gloss hints, that science itself can be “bad,” or at least have bad results.

All of which is a long-winded introduction to Issue #19, told in parallel to the events of the preceding issue and its dramatic climax (spoilers for the very tardy reader) which that finds Joseph Oppenheimer prone on the floor with a gaping hole in his head, Albrecht Einstein (Albert’s inter-dimensional doppelganger, who stranded Albert on an alien world) and the computerized ghost of F.D.R. looking on in shock, the killer’s face hidden from the panel.

Joseph Oppenheimer, of course, has been a major character throughout the series, and has maybe most fully embraced the mantra of “Science. Bad.” or at least has done so with more zeal than any other. Joseph Oppenheimer was the “bad” twin of scientific Robert Oppenheimer; while Robert acquired knowledge through learning and study, Joseph did so by killing and eating people, acquiring their knowledge and essence, including, eventually, Robert. In short, Oppenheimer has been the closest thing to a villain in the series, but even his machinations have laid the groundwork for the laudatory goals of the Manhattan Projects.

Issue #19 is a requiem of sorts to the characters of Joseph and Robert. Throughout the series, Hickman has interspersed the linear plot with single issues – rendered by guest artist Ryan Browne – that depict a war raging in Joseph’s head between two diametrically opposed factions of analogs of himself – fragments of his psychotic mind – with one faction following Joseph’s insane lead, while the other is led by Robert, who, having been consumed by Joseph, exists as part of him in his mind.

I always find these issues to be rare treats mixed into an otherwise excellent series, as the very setting – the landscape of Joseph’s twisted mind – allows for Hickman to completely indulge himself in his fancy of the moment, expertly complemented by Browne’s crafting of surreal landscapes and settings. The only disappointment with this issue would be that it may be the last of the “(In)Finite Oppenheimer” interludes, given the gaping hole in Joseph’s head at the end of Issue #18, though, of course, death in comics is far from a certainty, and pushing the limits of the gray between binaries life and death would be all to apropos for this series.