Deadly Class is the newest installment in Rick Remender’s return to creator-owned comics. And contributor G.D. Kennedy has an advance look! 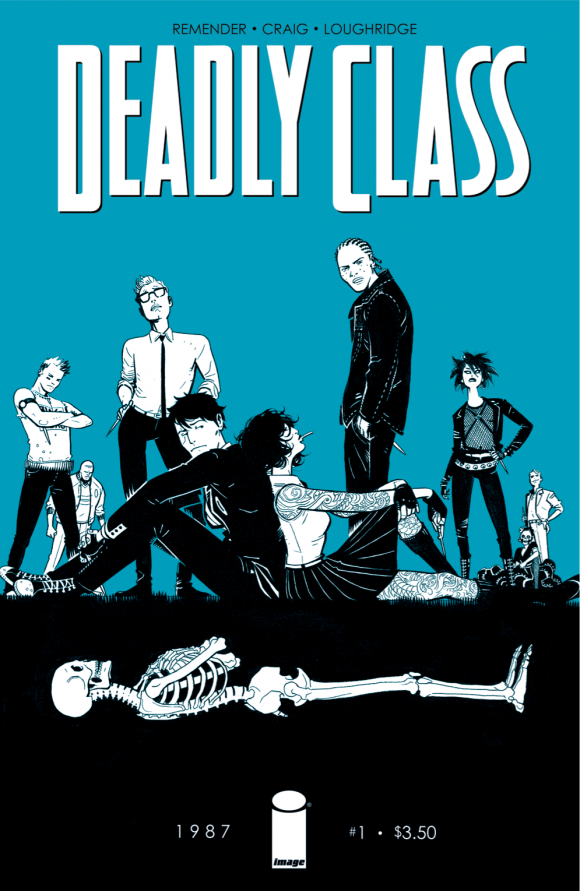 Deadly Class follows Marcus Lopez, a teenage orphan who wanders through the bleak backdrop of 1987 San Francisco and Reagan-era conservatism, homeless and resorting to begging and petty crime just to eat. But this all changes when Marcus is given the opportunity to become an assassin by joining a secret high school.

The first issue is beautifully rendered as it offers an introspective exploration of the travails of a damaged childhood. Remender’s writing is tight and personal, succinctly building a well-rounded character while keeping the story moving at a fast clip. Due credit must be given to artist Wes Craig, whose work is stunning and expertly captures Marcus’ emotional turmoil (a scene on the Golden Gate Bridge is one of my favorite visuals in recent memory), as does the clever monochromatic color schemes employed by colorist Lee Loughridge.

But the first issue of Deadly Class is a fragmented book, as about half-way through, when introducing Marcus’ future classmates, its tone abruptly shifts from an intense character study to more pro forma action sequences with an ensemble cast while invoking well-trod tropes. Though not necessarily a negative, as the story remains effective, the new tone feels familiar – a teenage version of Wanted – even if more compelling than prior iterations. This leaves the reader uncertain of what to expect from upcoming issues: Is Deadly Class an exploration of Marcus or a superficial ensemble story about a gothic Hogwarts? While Remender may not need to choose, and would undoubtedly inject new elements to even a tired story, toeing this line while maintaining the book’s integrity may prove a daunting task.

Other Image Books Worth a Look This Week

Dead Body Road No. 2: Justin Jordan knows pulp (see Strode, Luther), and Dead Body Road is certainly that, a simple blood-soaked revenge story. But one of the most compelling aspects of Jordan’s writing is his ability to develop characters and tell compelling stories with little dialogue.  He does just that in Dead Body Road, offering up fun pulpy goodness while subtly building characters and relationships in the midst of furious action.

Pretty Deadly No. 4: Pretty Deadly is a high-concept book whose first issue was quickly met with both praise and criticism for its rejection of traditional narrative. What is clear by Issue #4 is that the criticism is largely unwarranted as Pretty Deadly has hit its stride with its unconventional form, weaving together disparate elements into a cohesive story. This book is building to something truly unique.