Some of the oldest pulp characters get their latest shot at renewal, from Dynamite. 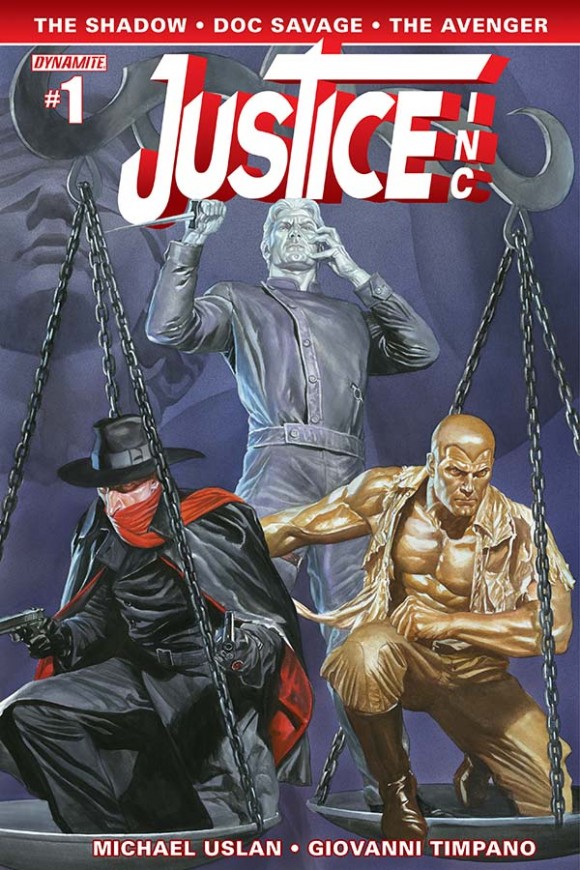 Cover by Alex Ross, as if you couldn’t tell.

Justice Inc. #1 from Dynamite Entertainment is like the Avengers but with pulp characters by a writer who knows his way around the old school, Batman film producer Michael Uslan. Dynamite is the home of these pre-comics era characters, so it’s only right that they would put together three of history’s biggest pulp heroes in one adventure. One of the major problems with these throwback books is that they are usually rather dry, that the contemporary comic creator crafts stories to match the melodramatic tone of yesteryear and create something that, while tonally accurate to the past, can come across dry and stodgy.

This is not the case of the inaugural issue of Justice Inc. as Uslan and company deliver a fast0moving, fun, time-travel tale that melds Doc Savage, the Shadow, the Avenger, the heroes’ myriad companions, H.G. Wells, Albert Einstein, Howard Hughes, and more historical greats. The first issue is mostly a Doc Savage story as the adventurer must fly back in time from the present to 1939 to rescue a passenger plane that got caught up in a time vortex. Once the action starts, it just keeps going and has a real movie serial/Indiana Jones feel that will delight fans of the pulp era and new readers alike. There wasn’t much Avenger and the Shadow barely appeared, but you know that Uslan is not going to go too long without delivering the goods on those two classic heroes, but it is clear that the writer/producer knows his way around a Doc Savage yarn and is having the time of his life crafting the team-up between these three legendary characters.