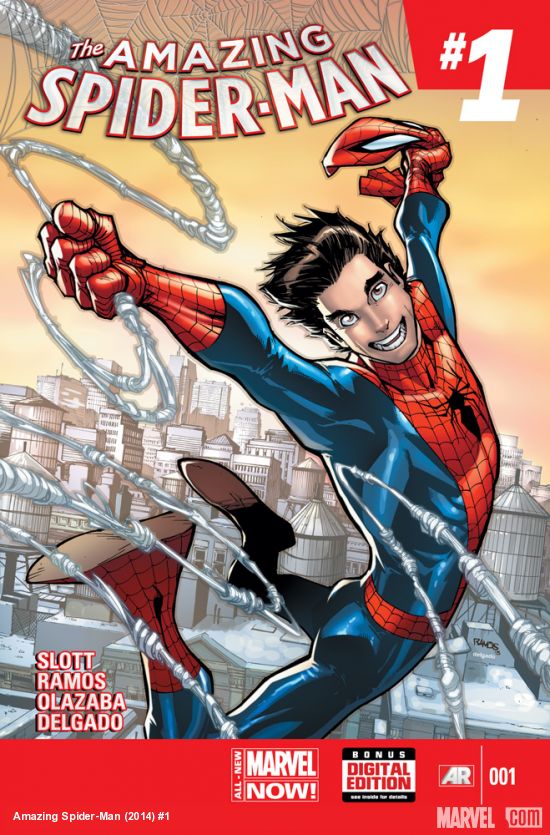 Amazing Spider-Man #1. Writer: Dan Slott. Penciler: Humberto Ramos. Inker: Victor Olazaba. Colors: Edgar Delgado. Spidey’s back! All the story beats, character points, drama, jokes, sub-plots, and character connections that were left dangling from the last issue of Superior Spider-Man are picked up here, and man, does it all work. Slott does what he does best, humor with an undercurrent of impending doom as Peter Parker picks up the pieces of his life now that Doc Ock is no more. Peter must come to terms with Ock’s true love, the diminutive Anna Maria Marconi, deal with suddenly being CEO of his own company, and get used to being a super-hero once again now that he controls his own body and his own destiny. It’s all a hilarious take on our favorite hero and it will make even the most jaded reader glad that our Peter is back. There are so many characters to be visited in this return issue, and Slott nails them all and starts off with a prelude so stunning it takes an effort not to keep referring back to it during the course of this most entertaining issue. Welcome back Pete, this issue is a great reminder at just how much you were missed. But y’know what? I also kind of missed Ock.

The premiere issue also features back-up stories by Slott, the great Peter David, Chris Yost, and a host of others featuring Electro, the Black Cat, Spider-Man 2099, a prelude to Spider-Man #1.1, and even a reprint of Inhuman #1 in its entirety. The Electro and the 1.1 preview were particularly fascinating. A complete package to be sure.