A View of Comics From Behind the Counter

Home » RANDOM STUFF » A View of Comics From Behind the Counter 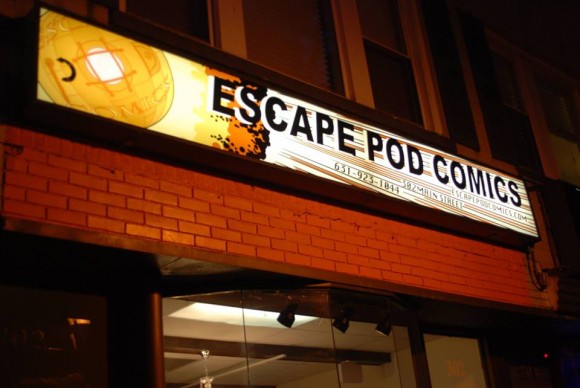 PW recently published a report on the state of comics retailing. Menachem, owner of Escape Pod Comics in Huntington, L.I., participated. Below is his complete survey, verbatim, which is a fascinating glimpse of comics from the perspective of someone who makes a living selling them. The full story, featuring retailers from around North America, can be found here.

2014 was a toss up between the Saga Volumes (taken together, they would win, I guess) and This One Summer by the Tamaki cousins. In 2015 it’s Scott McCloud’s The Sculptor with Stjepan Sejic’s Sunstone breathing right down it’s neck.

Periodicals are harder to track, but Saga, Ms. Marvel and Sex Criminals were big in 2014. 2105 is dominated by Star Wars and the associated titles, with all those others coming close. 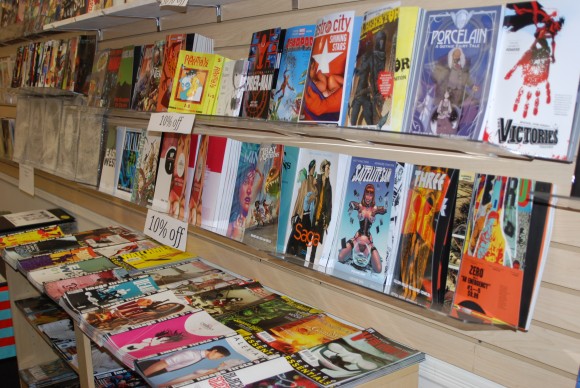 3) Which one of those formats – periodicals or graphic novels – is selling better overall?

That’s a difficult question- do you mean in sales? in profits? in number of units? Add that to the fact that Diamond (the main comic distribution co.) offers lousy discounts on many GNs and you’re going to create even more confusion. All things taken to their logical conclusion I would say it’s graphic novels and collections, but that has a lot to do with our specific focus on those things as opposed to periodicals.

4) How was your holiday season? Was there a standout book or periodical?

Holiday season was good, only our 2nd year in operation, so still not something mind-blowing but very decent, sales-wise. The big Stand-out was the Locust Moon’s “Dream Another Dream” Little Nemo anthology. We initially backed the Kickstarter and I pre-sold all THOSE copies, so I ordered another bunch from Diamond and those all walked out the door in December. Now, the numbers on it were low, but we’re discussing a giant ( I MEAN GIANT) book with a price tag of $125, so the fact that so many were bought is pretty wonderful, though in no way undeserved. 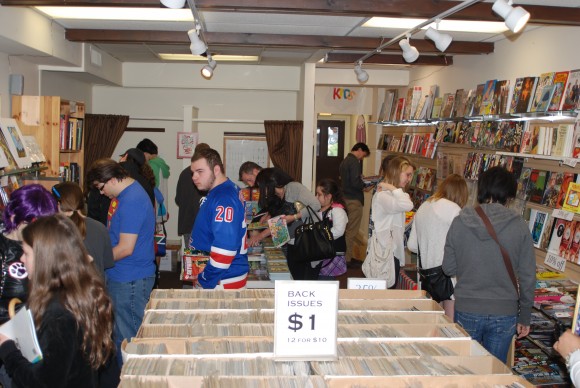 5) What is your mix of stock like? What’s the mix of Big Two to non Big Two titles? Can you give a percentage breakdown?

We try to stock as wide a range as we can handle. That means we mix it all up and do our best to get lesser known books. The “Big Two” (Sorry for the quotation marks, I just really don’t like that designation) make up about 50% of our purchases, but only about 35% of the books on the shelves (plenty of titles are ordered only for hold customers). I would say Image Comics makes up another 30%, Dark Horse around 15% and then it gets crazy. I mean, So What? Press (a small publisher who sends us their stuff) has over 10 different books in our “Self-published” section and that would put them at about 1% of stuff on display? It’s tough, but we try to switch out stuff often and get as many eyes on different things as possible

6) Have there been any notable events or sales initiatives by Marvel, DC or Image that effected sales in the past year?

Well, every decision they make affects those things, as we try to run a tight ship. So, when customers are down on an event (like DC’s Forever Evil or Marvel’s Axis) we cut the ordering as much as we can on related books. As for initiatives, I can name one from each that has increased sales and given the company some of our customers’ attention: DC offering “themed” order-all-you-want variants has certainly made an impact and Marvel’s recent attempt at catching up, particularly their “Women of Marvel” covers going on right now, has also helped. But the biggest has to be Image’s consignment deal- at no cost, we were given a large floor display that holds 6 titles. Image sends us consignment copies of a new title or so about every week. We’ve set that up right by the register and it’s had a HUGE impact. 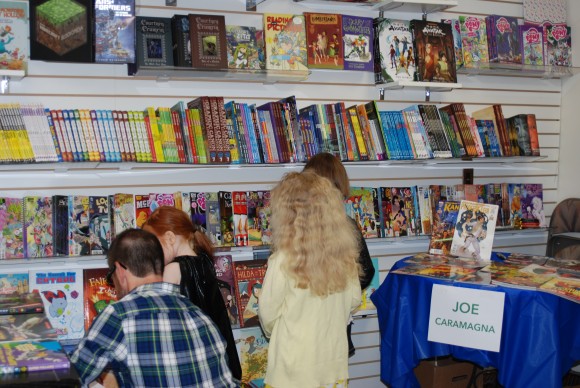 7) How is your store doing in general now in relation to last year?

Well, as this is the 25th month we are in operation I can say with no doubt that we are doing about 150% better than we were last year. But the weather and our relative newness has a lot to do with that. People are still walking in asking “How long have you been here?!”

8) What segments of the market are experiencing the most growth?

Not the greatest question for me, based on my above, but I would say it’s fairly evenly split between periodicals and collections. Once we’re really properly established, though, I expect the periodicals to drop somewhat as we really do encourage customers to buy collections rather than monthly, for a variety of reasons. 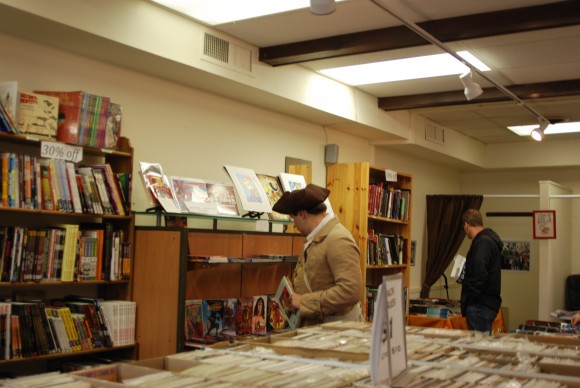 9) What segments of the market are experiencing the biggest drop in sales?

Same as above, except reverse the second sentence. 😀

10) What are your customers most excited about?

Spider-Gwen was huge. Alex DeCampi’s Archie Vs. Predator is our most anticipated “new” series that’s going to drop soon. Once you get into the summer there are people excited for all the Marvel and DC #1s that will follow the events (We’ve really got no one excited for these events) and the Image books they previewed at their Expo.

11) At this point, digital purchases don’t seem to be cannibalizing print sales overall. Is that true at your store? How do you see services such as Comixology impacting your customers buying habits now that digital comics have been widely available for 5 – 7 years?

I love digital! It means that when a newer reader to comics (of which we have many, both as regulars and walk-ins) wants something I don’t or can’t get, I can send them that way. We also use the Comixology “Hold List” service for the store, which comes with a digital shop. We only make pennies on the dollars from the sales that come through that shop, but they pay out enough to cover the bill for the service, so it balances out! 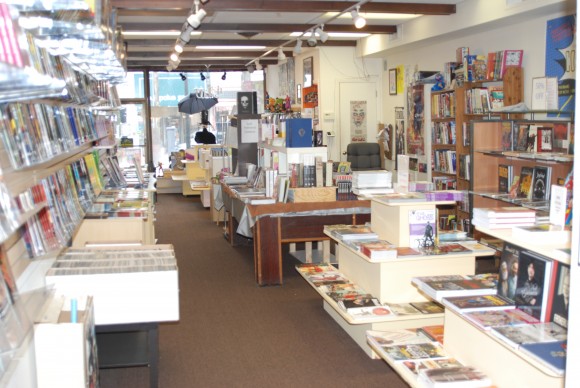 12) Do you carry other products? If so, what kinds and what percentage of your sales come from stock other than comics?

We have a nice number of prose books and art books as well as storage supplies, but they are all somewhat comic related (Neil Gaiman books, Ashley Wood art books) and I won’t really count that. In addition, we only carry a tiny selection of little knick-knacks and stuff, Funko Pops (a small selection), key chains and such. We also have an interesting range of art, from traditional posters to fan-made prints and lots in between. Beside for that, we have this HUGE collection of statues a customer asked us to sell on consignment for him- if you include the statues I would say all that stuff makes up around 15% of our stock, if you take out the statues the number drops to around 8%.

13) How does the economy seem to be affecting sales and store traffic from your vantage point? Have any other outside events effected sales?

The economy is having much less of an impact than the weather. Both our winters in business were awful, though this year was better. Economically, we’ve seen increased sales as the economy gets better but, as I say, a lot of that has to do with our age.

14) What do you see as your current biggest challenges? 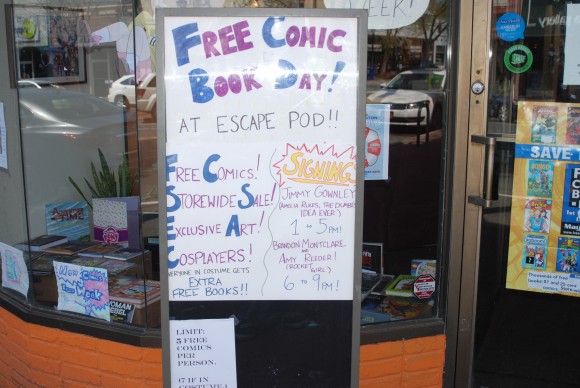 15) What can publishers and distributors do to help your sales numbers?

Publish less books — in an attempt to capture market share and shelf space these companies are churning out an astronomical number of monthly books, many of which have a small or not very loyal base. If each company (yes; Image, Dark Horse, IDW, and Boom! also) cut their lines by ⅓ I think we would all see increased sales AND better books.

Also, the distribution model at Diamond is a disaster. Companies need to find other outlets. As it is, I buy as much as is feasible through other channels.

16) Did you attend ComicsPro last month? If so, what was your main takeaway from that event?

HAHAHAHAHA. ComicsPro is not for me. I don’t feel the need to go to meetings to see how to generate more business for companies that disregard my place in the sales chain on a regular basis. When I was opening my shop, Brian Hibbs quit ComicsPro. I was already pretty sure I wasn’t going to join them or any of these other self-congratulatory groups as it was, but Brian’s statement locked it down for sure.

Can I just say, without trying to give offense, that that question is the comic retailer equivalent of asking a female creator: “How it is to be a woman in comics?” It’s tired, it’s old and it sets up a binary distinction that’s patently ridiculous. My customers are people who buy comics. Some are noticeably male, some are noticeably female but I’ve never gone out of my way to confirm, scientifically, which gender they fall under.

I’m sorry, but it’s a question I’ve been getting for over 2 years now and I’ve stopped trying to answer it factually or even to spin it in my favor. You want number? I’d say 60% of our hold list customers identify as male, 40% as female and that the numbers are about the reverse for regular walk-ins and about even for random walk-ins… but it doesn’t really say ANYTHING about my store or the trends in the market. Unless, of course, to point out that we are still hung up on things like this.

FUQ #2) Do you use a comics retailing POS system like moby? if not what do you use?

One of the things I was told while gathering information from other retailers before I opened was that NO comic-specific POS system was really worth the effort. I did, though, open the shop using Square to take our credit card payments. In the two years we’ve been open, the company has moved forward in leaps and bounds- I can now keep track of inventory, sell online and give all sorts of discounts directly on my iPad or computer, so that’s sort of become our POS system, with all sorts of different products arranged in Square’s wonderful system.