Secret Wars is here! The hype is over and the story begins. Does Marvel deliver? 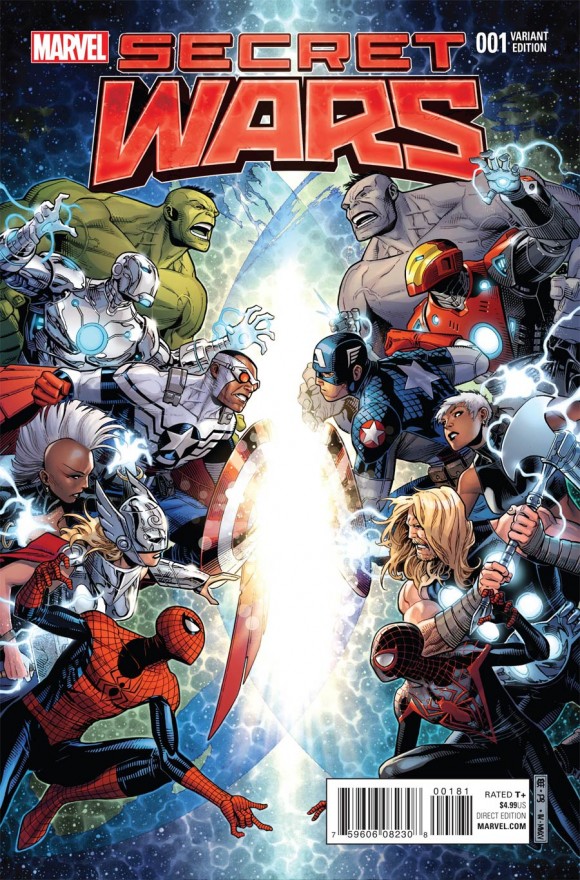 Jim Cheung’s variant. One of the approximately 14,000 variants for #1.

Finally, Marvel’s multiverse-changing event, Secret Wars, is here, and as multipart, massive, many-tendrilled crossovers go, it is rather good. Now, if you haven’t been following Jonathan Hickman’s two Avengers books, you will be seriously lost, which probably isn’t a good thing for a crossover that is being billed as a must-read event that will change everything. But if you have been checking out Hickman’s Avengers, this book offers more of the same conceptual acrobatics and storytelling acumen — just much, much bigger.

Using two Reed Richards — one from the regular Marvel Universe, one from the Ultimate Universe — as the narrative center of this massive story grounds it a bit. We get to go along for the ride as the Fantastic Four and the rest of the Illuminati try to lead an escape off of an Earth that is about to collide with the Ultimate Universe. Meanwhile, Hickman plays with contrasts, as the Ultimate Reed is an evil, despotic madman. Hickman deftly bounces between Reeds and between universes and a thrilling battle for survival. Other than the two Reeds and a bit with General Fury, Hickman really doesn’t allow any one character to get a foothold in the narrative, a storytelling tool that gives the tale a frenetic pace but also makes it rather jumbled. A massive crossover? Jumbled? Yeah, try not to faint. 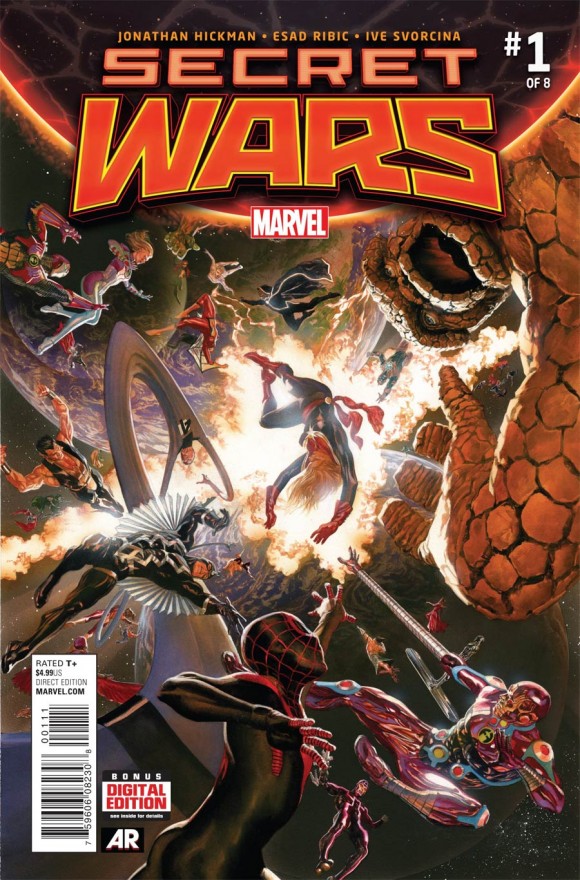 There are some great bits with the Kingpin and the villains of the Marvel Universe and Cyclops and a group of Sentinels as both publishing universes vie for survival. The plot structure is similar to DC’s Crisis on Infinite Earths, but Hickman tells the tale in such a way that makes this comparison only a surface one.

Meanwhile, things end badly for our heroes and it seems next issue we will get to the meat of the story and Battleworld. But it has to be said that the true MVP of this event is Esad Ribic, who has to draw a ton of characters but give each one a visual personality that makes this overstuffed book burst with dramatic energy. It’s confusing, it’s fast paced, it’s high stakes, it’s Secret Wars and it is an enjoyable read.

But buyer beware: It is not for the neophyte or lapsed Marvel reader.