There’s a Starman, waiting in the sky. And another… and another… 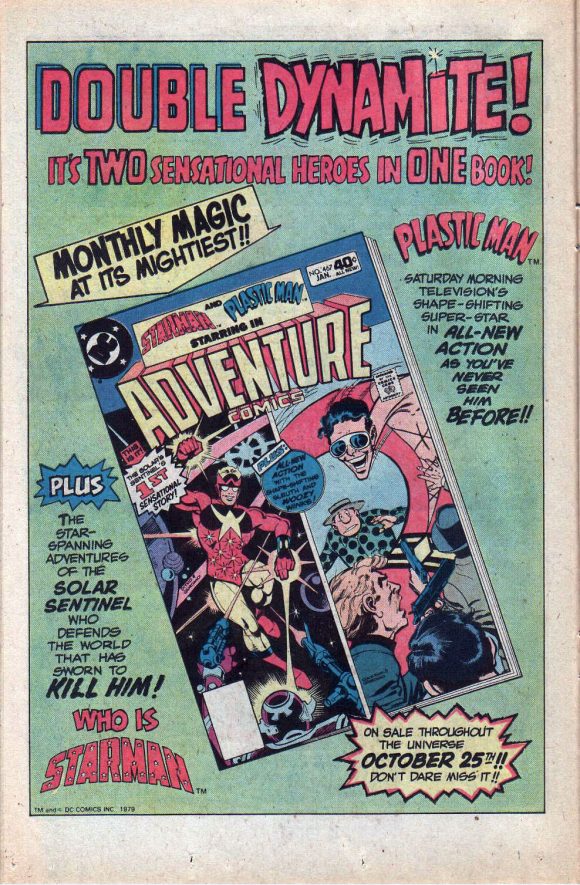 Quick, when you hear the name Starman, who do you think of?

The Golden Age character with the red-finned bonnet? His son, Jack? The Jeff Bridges movie? The David Bowie song? The seemingly countless others who’ve carried the name?

How about Prince Gavyn, the early ’80s hero created by Paul Levitz with an artistic assist from Steve Ditko?

Well, the Prince Gavyn Starman is among the characters getting the spotlight in Michael Eury’s Back Issue #115 – the “Sci-Fi Superheroes Issue.”

He’s not the only Starman in the ish, either. Gerry Conway and Mike Vosburg’s earlier iteration also made the cut. Actually, here’s the complete table of contents for your perusal: 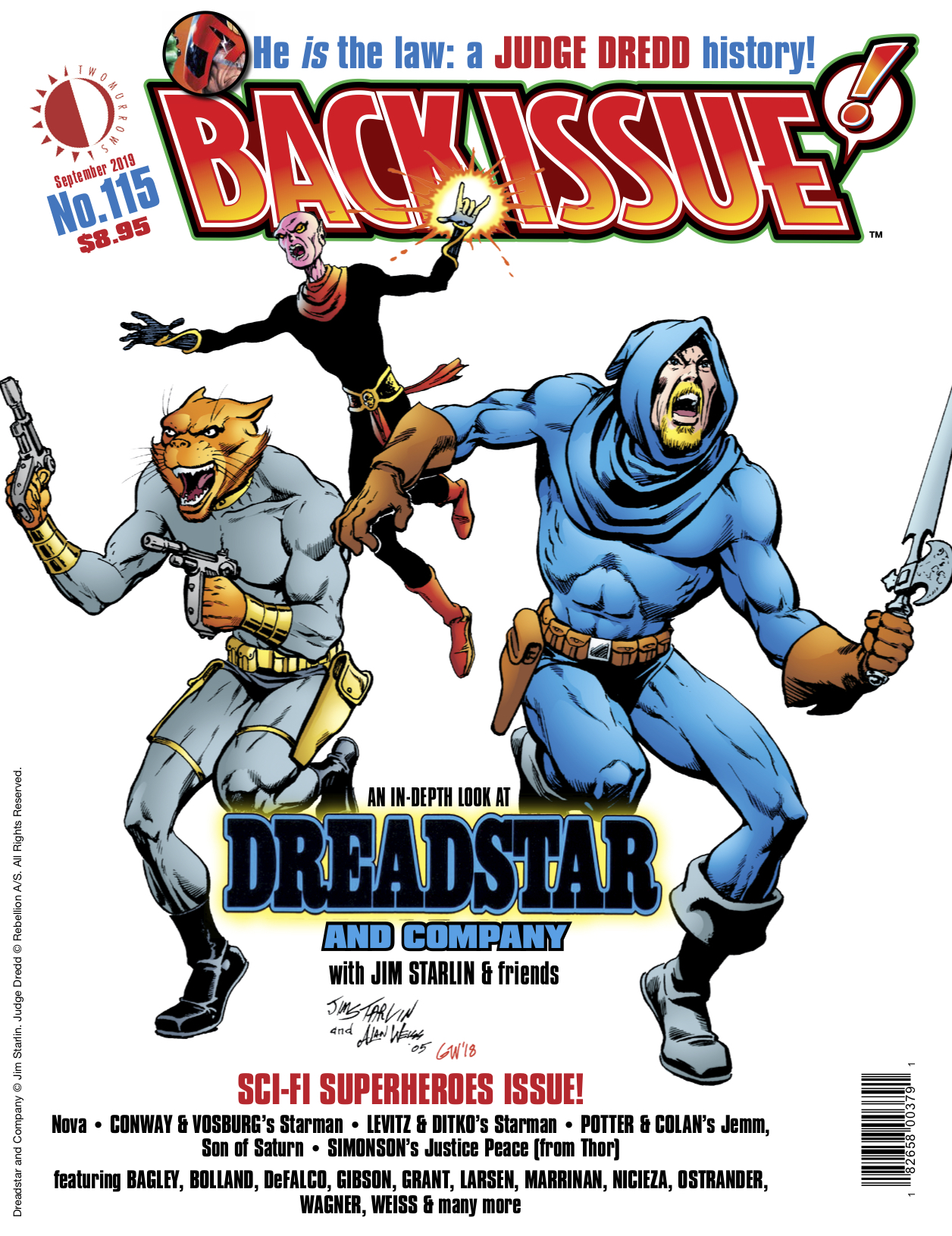 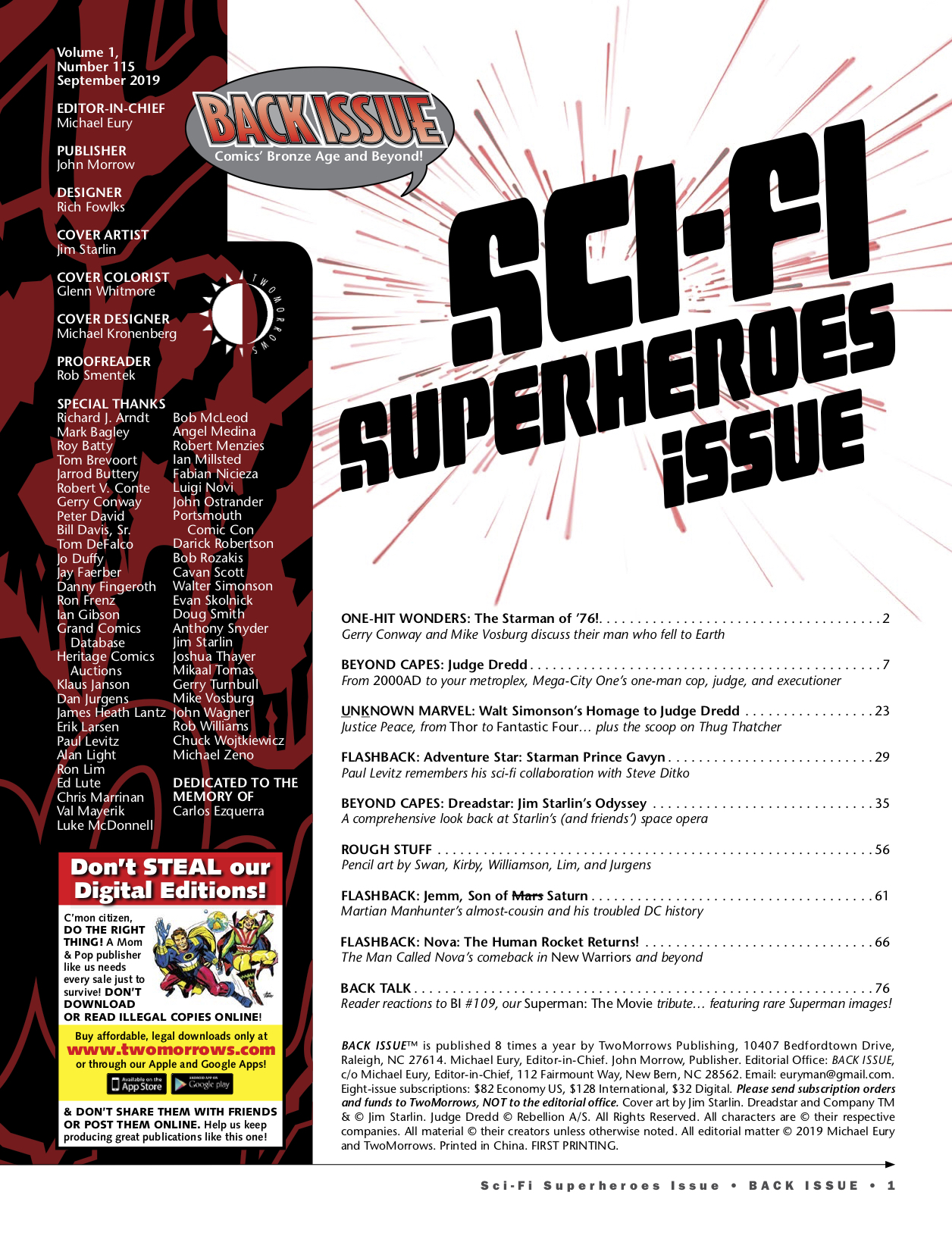 Anyway, Levitz and Ditko’s Starman is a character I know virtually nothing about, so I figured he’s ripe for an EXCLUSIVE EXCERPT from the issue, which is due Wednesday, Aug. 28.

Political intrigue, Shakespearean treachery, and science-fiction adventure combined in a new serial that debuted in the same year that The Blues Brothers and the Friday the 13th franchise came to cinemas.

Adventure Comics #467, like The Empire Strikes Back some months later, took us to far-away galaxies. The opening chapter of Starman began as the anthology comic book’s second feature, after a story starring Plastic Man, who at the time was the star of a Saturday morning cartoon series. 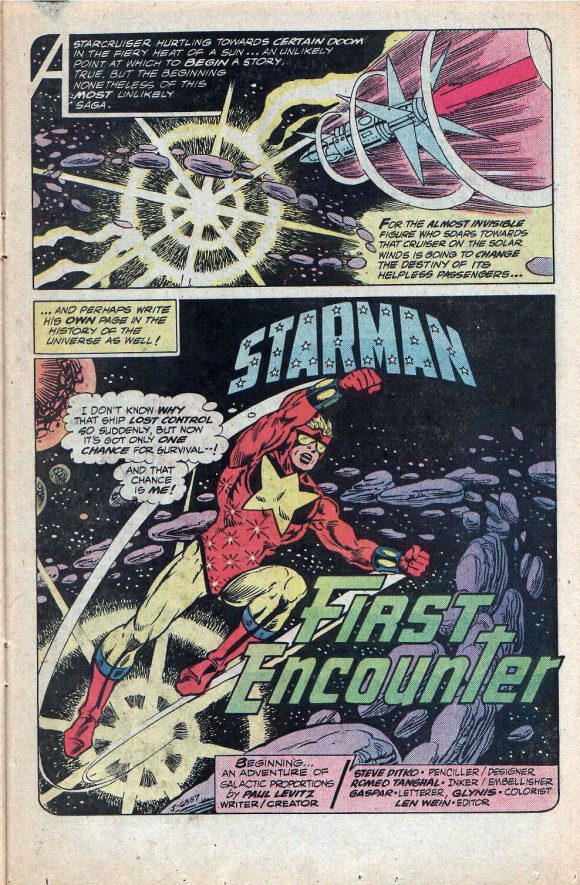 Titled First Encounter, the story, written by creator Levitz, drawn by character designer Ditko, and inked by soon-to-be New Teen Titans embellisher Romeo Tanghal, sees Starman save a spaceship from being hurtled into a sun. After our hero redirects the craft with stellar energy bolts emitted from his wristbands, its commander, Lord Protector Oswin—Guardian of the Galactic Rift and Elect of the Empire—wishes to thank Starman… or so we and he believe at first. In reality, Oswin wants to learn Starman’s secrets, like how he can move and breathe in space without a ship, force-field, or spacesuit.

This chapter begins to combine space opera with a political thriller as Starman discovers that Oswin is holding Imperial Security Officer Jediah Rikane prisoner. All of this is part of the lord protector’s plan to usurp Throneworld’s sovereignty and become emperor. Starman helps Rikane escape Oswin’s torturous cell, and with the aid of his mentor, the enigmatic alien appropriately named Mn’Torr, Starman sets out to stop an insurrection.

“Len Wein was the editor responsible for offering the assignments,” Paul Levitz said. “He asked me to come up with a series to fit a slot in Adventure Comics. I had just read a history of the Ottoman Empire, which talked about a period when it was the practice to kill off all rival claimants to the throne when a new sultan was named. I twisted that into a science-fiction background, and was lucky enough to get Steve and Romeo as the artists.” 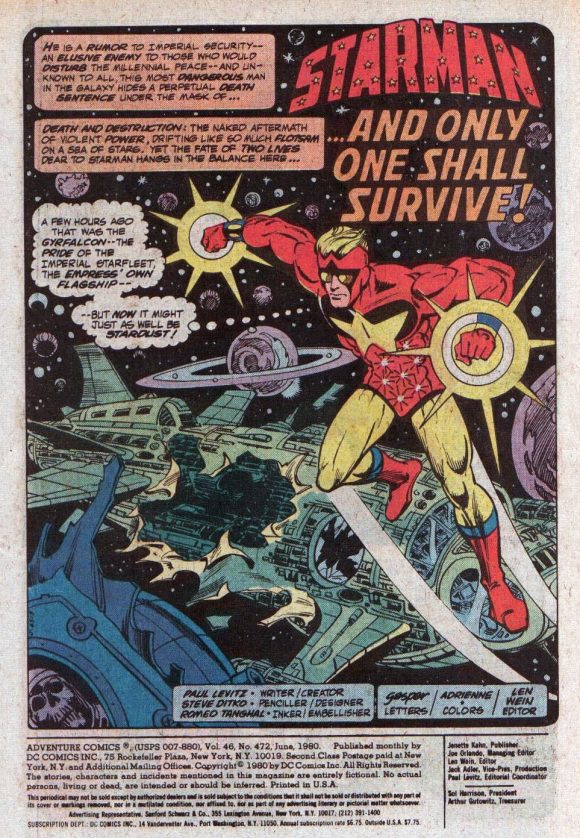 Readers may be asking why the character was named Starman when other characters had used that moniker in the past, much like the reuse of the names Flash, Sandman and Green Lantern. The answer is a simple one.

“I’m not a great namer,” Levitz admitted, “and it was a great name we weren’t using at the time and suitable for a very different incarnation.”

On Steve Ditko and Romeo Tanghal being part of Starman, Levitz added, “Steve would have had the practical option of turning it down, as there was other work available for him. Romeo probably just got it as a straight assignment. I’m glad they signed on.” 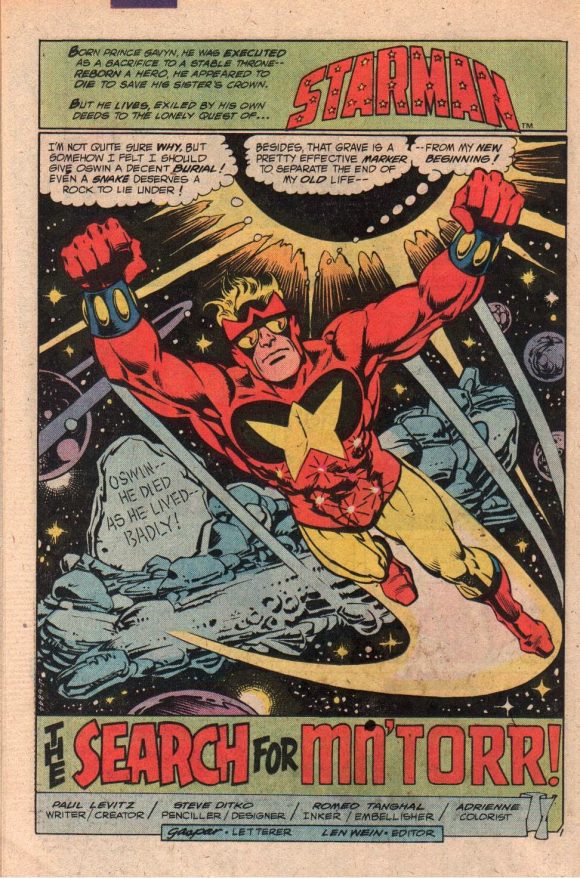 How did Levitz’s collaboration with Ditko on Starman differ from their partnership on (the short-lived sword-and-sorcery title) Stalker some years before?

“Well, I hope I had learned a fair amount in the intervening years,” said the writer, “and I was giving him tighter scripts to work from. At the time I did Stalker, I think I was still amazed at my youthful luck in working with him and Woody [Wally Wood, Stalker’s inker]. I imagine I was more professional on Starman.

“Both Steve and Romeo were total professionals,” Levitz continued. “Steve was, of course, one of the great storytellers and world-builders. He gave Starman a distinctive look and feel.”

The full piece goes into much greater depth, obviously, so I highly recommend you pick up the issue this week. Back Issue #115 is available at your local comics shop or directly through publisher TwoMorrows. (Click here.)