A Hanukkah Surprise from 13th Dimension!

I’m Jewish. The Thing’s Jewish. Batwoman was Jewish but I don’t think she is anymore. Hanukkah starts tonight. Here’s what I found when I Google Imaged “Hanukkah superheroes” …

This. What the hell is this? I mean seriously?

What is this, the Legion of Super-Stereotypes?

When I was a kid, Channel 4, the NBC affiliate in New York, used to have their local talent sing “We Need A Little Christmas” at Rockefeller Center and they’d run it during commercial breaks. It was cute, warm and hokey. For all I know, they still do it but who the hell watches network TV anymore?

For Hanukkah? The TV stations would give you a still image of a lit menorah, with a voice-over, “Happy Hanukkah, to all our Jewish friends, from those of us at Channel blah blah blah.”

I still have issues. 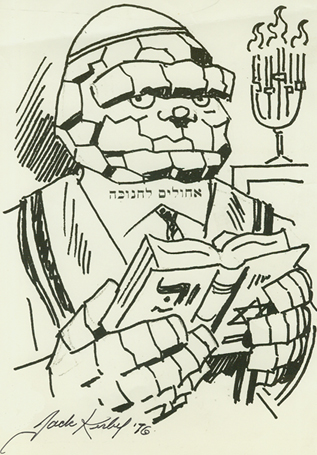