60 YEARS OF JAMES BOND: 13 Great Things Introduced in DR. NO

AN ANNIVERSARY SALUTE: 006 decades of 007 on the big screen… 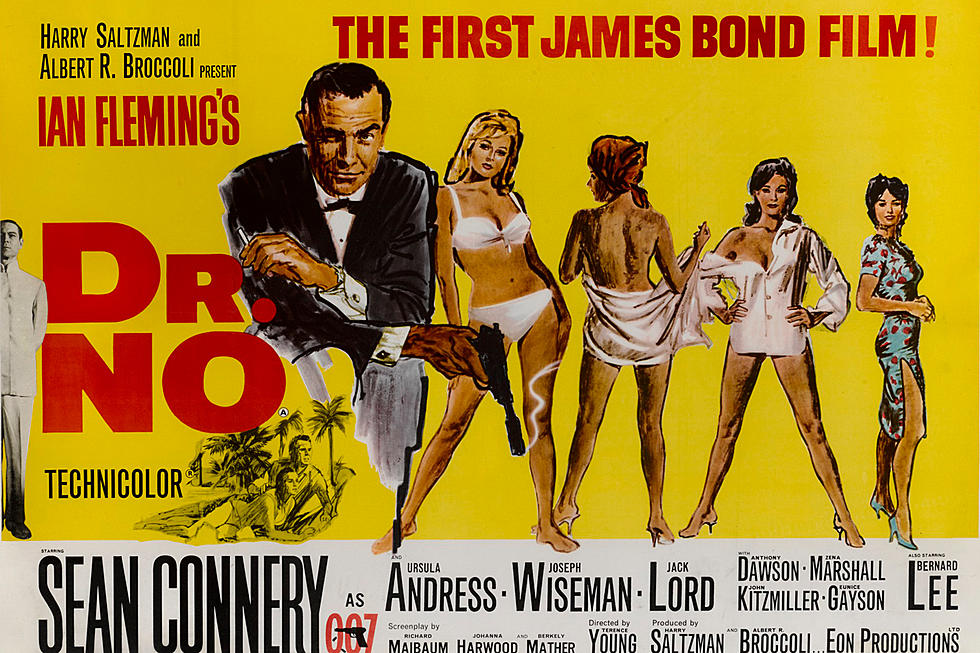 On October 5, 1962, exactly 60 years ago, Dr. No premiered at the London Pavilion. (The U.S. debut would not be until several months later). The movie was the first of the James Bond films and the start of an incredible 25-film franchise (27, if you want to include the ill-conceived 1967 comedy Casino Royale and the 1983 independent reboot of Thunderball called Never Say Never Again).

Ian Fleming’s 1958 novel Doctor No, the sixth in his popular spy series, was in fact reworked from an unproduced TV pilot script he wrote in 1956 called James Gunn – Secret Agent. Both had to do with agent James Gunn/Bond investigating the sabotage of U.S. rockets by Doctor No. (There had been a prior television adaptation in the United States in 1954 of Fleming’s first Bond book Casino Royale with American actor Barry Nelson as Bond.) 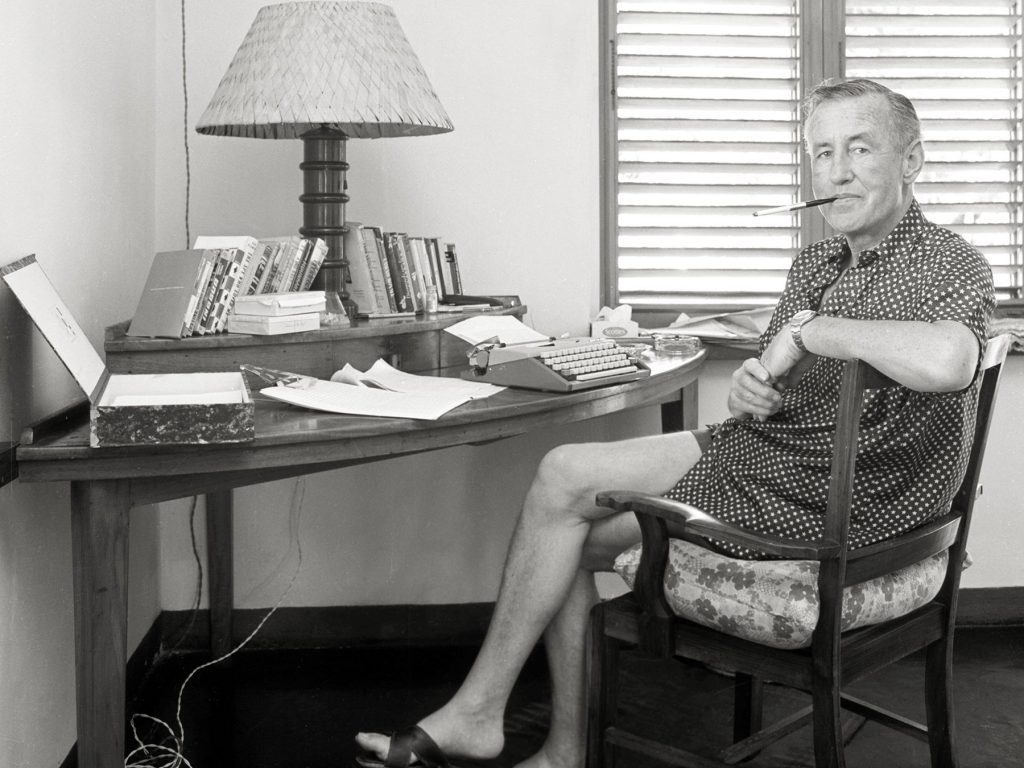 The early 1960s was the right time for a movie version of James Bond. There was still very much a Cold War going on in the world. What people attending the premiere of Dr. No that October 5 night did not know was just how frightening the Cold War was at that moment. The previous day, October 4, 1962, Russia had secretly finished installing a nuclear rocket on the island of Cuba, within striking distance of the East Coast of the United States. The next weeks of anger and tension between President John F. Kennedy and Premier Nikita Khrushchev would become known as the Cuban Missile Crisis, which ended with the Russian leader backing down beneath the stronger will of President Kennedy. Khrushchev dismantled the Russian rockets and had them returned to Russia.

Meanwhile, that audience of October 5, 1962 indulged in the first film based on Ian Fleming’s superspy, never realizing what they were seeing that day was the start of a 60-year (and counting) film empire. And they were seeing elements for the very first time that would become popular parts of every Bond film that followed.

Here are 13 things we love about James Bond movies that started with Dr. No:

1. The Opening Titles. Maurice Binder’s brilliance as a title designer can be seen in over 70 movies, including 14 Bond films (starting with Dr. No). He also created the famous gun-barrel sequence that opens Bond movies. 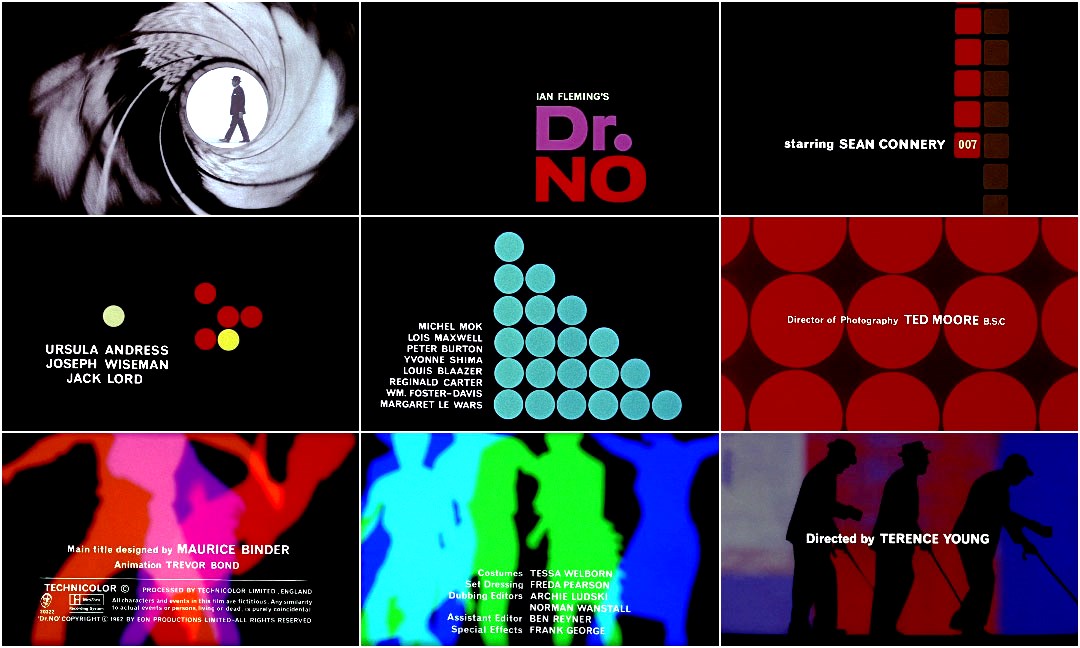 Trivia: For Dr. No, it wasn’t Sean Connery that the gun barrel was tracking; it was Connery’s double, stuntman Bob Simmons, making him the movies’ first 007.

2. The James Bond Theme. The theme for James Bond is one of the most recognizable in the world, filling people with the expectancy of yet another great Bond thriller.

Trivia: For many years, there were some who believed that John Barry wrote the “James Bond Theme” and not Monty Norman, the composer of the score for Dr. No. It was taken to court and the verdict was the theme was written by Norman, based on a song he wrote for a musical prior to the first Bond film.

3. “Bond. James Bond.” The use of those three words introduced us to 007 and – for many of us – to Sean Connery. It was co-producer Cubby Broccoli who saw Connery in Disney’s Darby O’Gill and the Little People and he asked his wife what she thought of him in the film. She said he was perfect.

However, while Connery did have qualities Fleming envisioned (that of being lean, dark, and sardonic looking), the actor still bore the manner of his upbringing, the son of a truck driver in Edinburgh. It fell to director Terence Young to take Connery in hand and educate him about fine food and wine, provide him with a wardrobe from Young’s own tailor, and sophisticate him in the ways of Eton.

Trivia: Cary Grant was the first offered the screen role of 007, but he said he would only do one picture. James Mason was also given the chance but he wouldn’t commit beyond two movies.

4. Bond’s Women. Over the history of the Bond movies, there have been many liaisons for 007. In Dr. No, there were three: Sylvia Trench (played by Eunice Gayson), the woman Bond meets in the casino; Miss Taro (Zena Marshall), secretly in the employ of Dr. No; and the unforgettable Honey Ryder (Ursula Andress), who rises from the water at Crab Key. 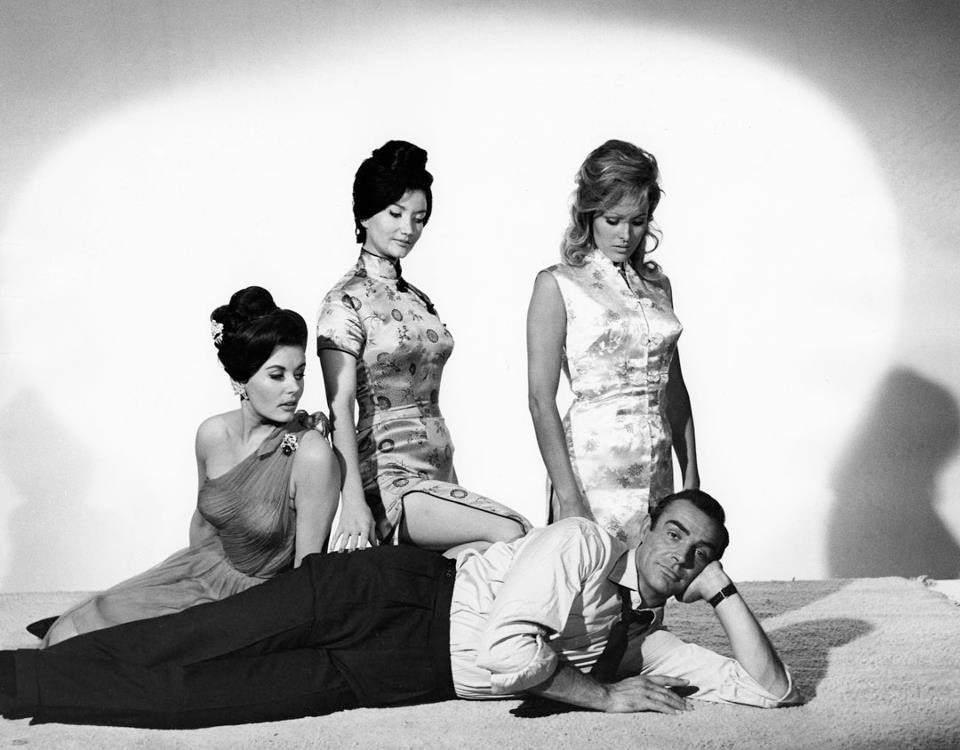 Connery as the center of attention for (L-R) Eunice Gayson, Zena Marshall, and Ursula Andress

Trivia: Gayson filmed her scenes during the day at Pinewood Studios and then rushed each night to the Palace Theatre in London to appear as the Baroness in The Sound of Music. However, good as her voice was onstage, it wasn’t right for the film. The same for Ursula Andress (her Swiss/German accent was too thick). Both women were dubbed by Nikki van der Zyl, who would also provide voices in several Bond films to follow.

5. The Bond Villain. Dr. No doesn’t appear fully onscreen until the last 22 minutes of the movie, but he was justly memorable as the first movie villain for 007. Joseph Wiseman, a noted Broadway stage actor, was given the role and he turned in an excellent performance, keeping Dr. No a cold and evil man without it ever sinking into a Fu Manchu stereotype. 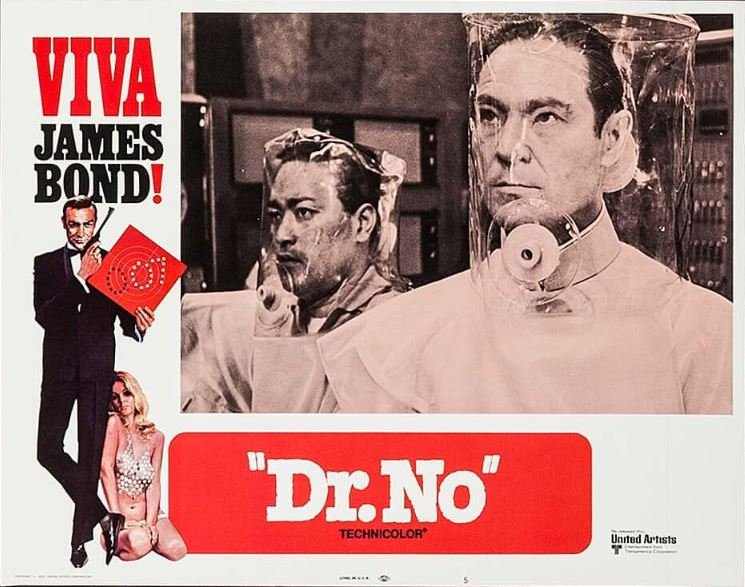 Trivia: Ian Fleming originally wanted his friend Noël Coward as Dr. No, but Coward sent him a telegram, “Dear Ian, the answer to Dr. No is No! No! No!”

6. Underlings. As is proper, the introduction of the main villain needed to be built up, so we first met a bunch of subordinates. These included three assassins posing as blind men; Mr. Jones, who pretended to be a chauffeur for the British government; a female photographer who tried on two occasions to take Bond’s picture; and the major quisling of the film, Professor Dent, who put a tarantula in Bond’s bed.

Anthony Dawson as (left) Professor Dent in Dr. No and (right) as Blofeld in Thunderball

Trivia: The photographer was played by Marguerite LeWars, who had been Miss Jamaica in 1961. The actor playing Dent was Anthony Dawson and he appeared in two other Bond movies, From Russia With Love and Thunderball. However, he went uncredited in those two films because he was portraying the mysterious head of SPECTRE, Ernst Stavro Blofeld, who was mostly seen petting a Persian cat. (Blofeld’s sinister voice, though, was that of Eric Pohlmann in both films.)

7. Bond’s Allies. Evil as the opposition may get, there are always others to help Bond make the world right again. Four of those allies have been there from the beginning: 1. “M” (played 11 times by Bernard Lee), the head of MI6; 2. M’s secretary, Miss Moneypenny (Lois Maxwell, 14 films); 3. Major Boothroyd aka Armorer, the quartermaster who would be named “Q” thereafter (but acted this one time by Peter Burton); and 4. American CIA agent Felix Leiter (Jack Lord in Dr. No, but almost always played by different actors in subsequent adventures). Another ally for Bond in Dr. No was Quarrel (played by John Kitzmiller), the boatman aiding the CIA. (Quarrel, Jr. would help Bond in Live and Let Die.)

Trivia: Bernard Lee was hired just the day prior to filming his scene as M (whose name was secretly Admiral Sir Miles Messervy, Knight Commander of the Order of St. Michael and St. George).

8. SPECTRE. The evil organization out to rule the world — Special Executive for Counter-intelligence, Terrorism, Revenge and Extortion — was briefly mentioned in the first film by Dr. No, one of its operatives, when he says he had hoped to convince Bond to join them. 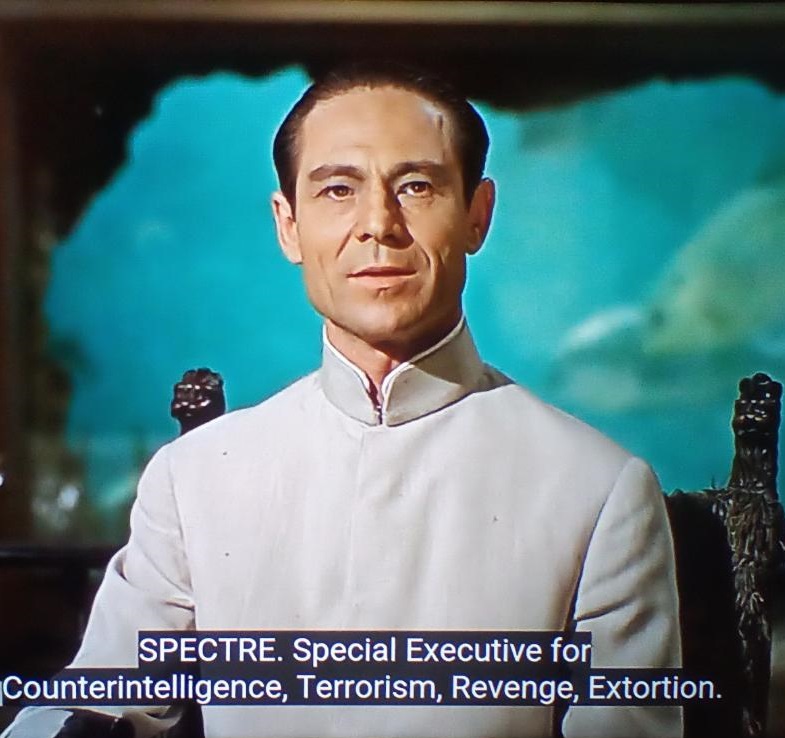 Joseph Wiseman as Dr. No explains the meaning of “SPECTRE”

9. Budgets. Dr. No was made for just over $1 million (and Sean Connery’s salary was reportedly only $16,500). In today’s market, that would be approximately $10 million. By comparison, the most recent Bond film, No Time to Die (2021) was budgeted at $250 million (with an additional $100 million for promotional purposes). Ken Adams, the set designer for many of the Bond films, had a budget of only 14,500 British pounds for Dr. No, yet his brilliance came through in the sets of M’s office, the casino, the interior of Government House, Dr. No’s lair, and more). 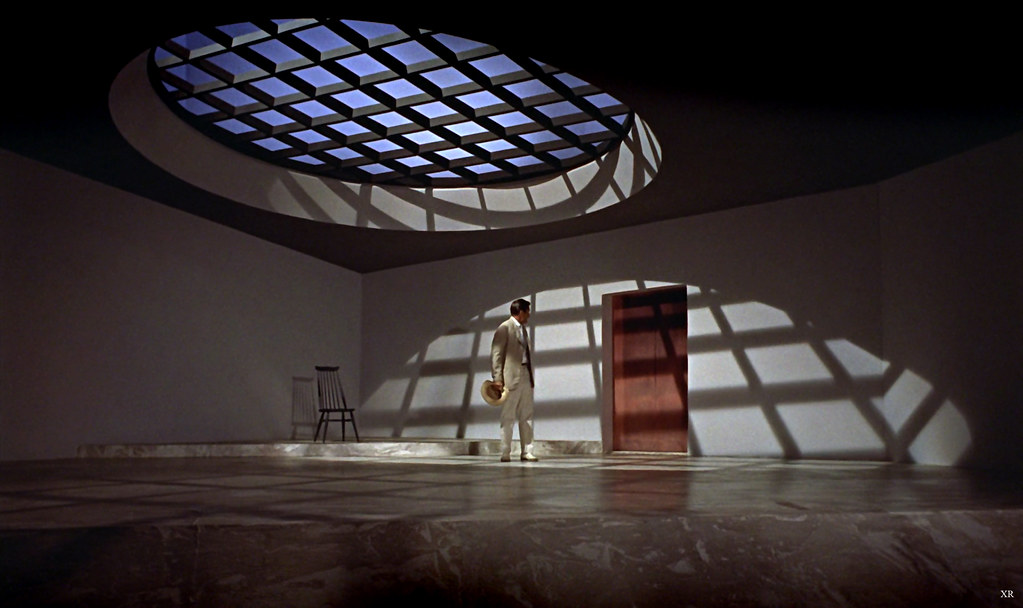 Anthony Dawson as Professor Dent in one of scenic designer Ken Adams’ amazing sets for Dr. No

10. Locations. Very important to Bond movies are the spectacular locations. For Dr. No, it was the beautiful island of Jamaica. 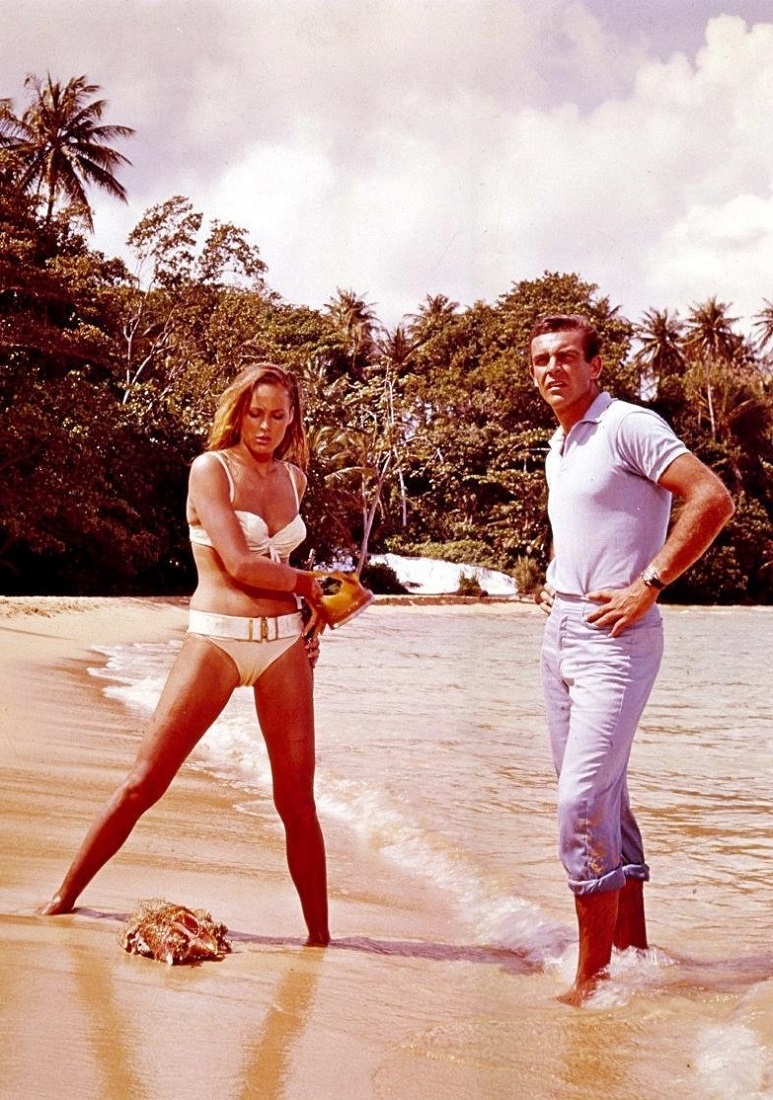 Ursula Andress and Sean Connery on location in Jamaica at Laughing Waters, the location in the movie for Dr. No’s Crab Key island

Trivia: Chris Blackwell, the location scout, had been recommended by Ian Fleming. At the time, Blackwell was the co-founder of the Island Records label and he would be instrumental in bringing fame to many singers, including Bob Marley. Island Records was very successful and Blackwell sold it in 1989 to PolyGram for $300 million. (Side note: Blackwell, who was the son of Fleming’s mistress, bought the Goldeneye estate in 1976.)

11. Vehicles, Weapons and Gadgets. Bond movies are justly famous for impressive cars, helicopters, rockets, speedboats, jet packs, motorcycles, a tear-gas attaché case, a golden gun, and even a “Felix Lighter.” However, since Dr. No was on a limited budget, the vehicles were just Bond’s rental car (a Sunbeam Alpine), a LaSalle hearse, and Dr. No’s Dragon Tank; the weapon was Bond’s Walther PPK; and the gadget was a Geiger counter. 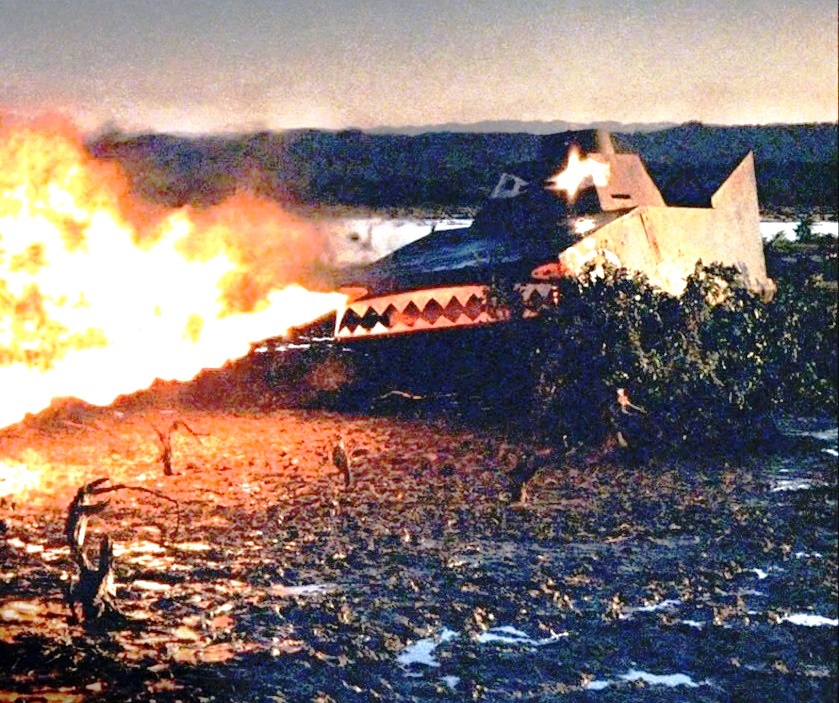 Trivia: The cost to transform a swamp buggy into the Dragon Tank was approximately just 70 British pounds, with the shell made up of hardwood and plywood.

12. Nobody Did It Better. Richard Maibaum wrote or co-wrote 13 Bond movies (more than any other screenwriter!), starting in 1962 with Dr. No (sharing writing credit with Johanna Harwood and Berkely Mather) and ending in 1989 with License to Kill (with his then writing partner Michael G. Wilson), two years before he died in 1991. 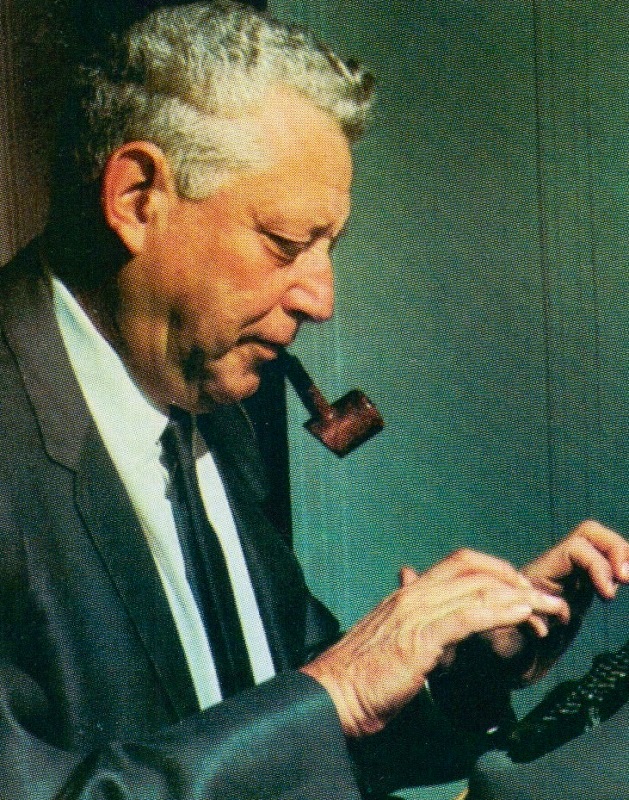 Trivia: Though the Bond films are noted for their escapism, Maibaum’s early writing career included Broadway plays that took strong political stances, among them The Tree, an anti-lynching play in 1932, and Birthright, Broadway’s first anti-Nazi play, in 1933 (the year that Hitler rose to complete power in Germany).

13. Merchandising. Though a plethora of James Bond 007 toys, watches, gum cards, models, and so much more would come with the following Bond movies, the merchandising for Dr. No basically consisted of a soundtrack album, a 45-rpm single, a paperback version of the novel, and a comic book adaptation. 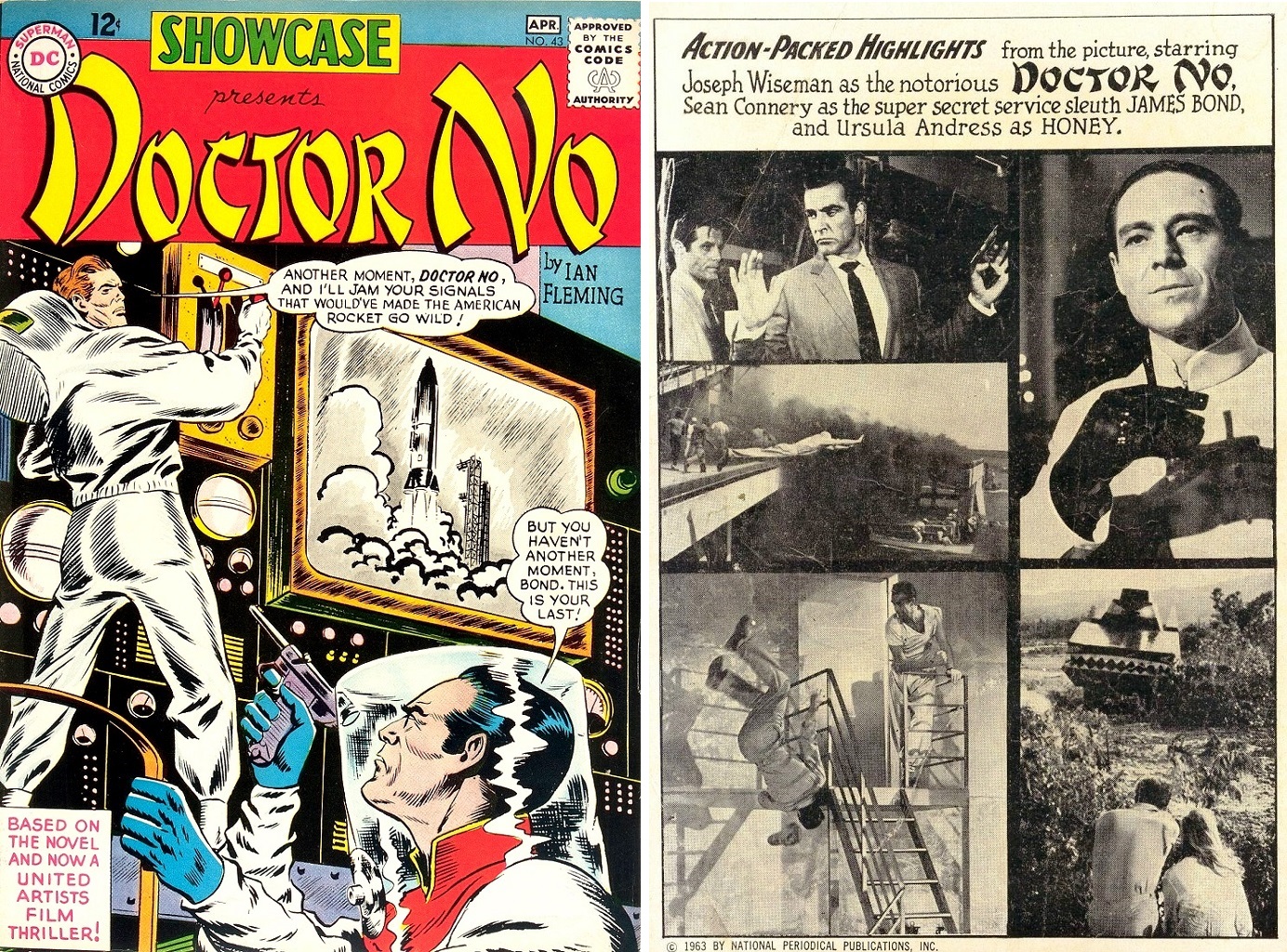 The comic book that appeared in North America was DC’s Showcase #43 (Mar.-Apr. 1963), which was a reprint of the British Classics Illustrated #158A: Doctor No (1962, Thorpe & Porter); however, DC’s comic recolored skin shadings, making all characters Caucasian. Also, the DC comic book release was not well-timed. The on-sale date for Showcase #43 was in January 1963 — but the movie would not debut in the United States until May 8, 1963.

Trivia: This would not be the first appearance of James Bond in comics. Starting in 1958, there was a “James Bond” newspaper strip that adapted Fleming’s novels. The Dr. No adaptation was published in 1960, drawn by John McLusky — and written by Peter O’Donnell, who would create the great Modesty Blaise comic strip three years later!