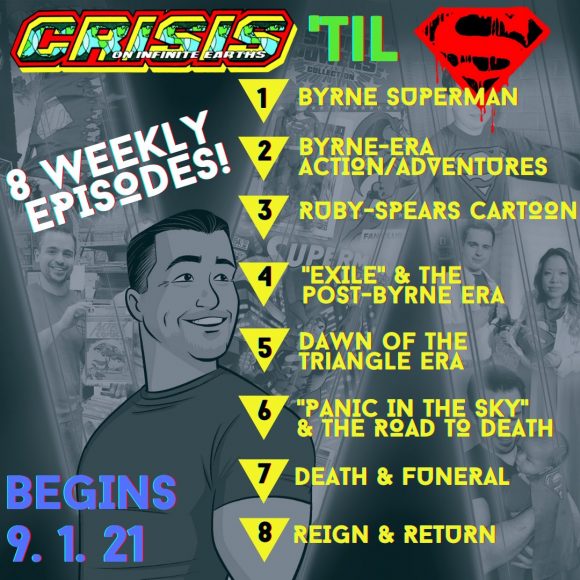 Anthony Desiato of the super Superman podcast Digging for Kryptonite is back this week with another episode — on The Death of Superman — and so here he takes a look at the early post-Byrne, so-called “Triangle Era” that gave us in essence a weekly series starring the Man of Steel and a robust supporting cast.

Dig it — and dig Digging for Kryptonite, available in audio form on your podcast platform of choice and in video form on YouTube. 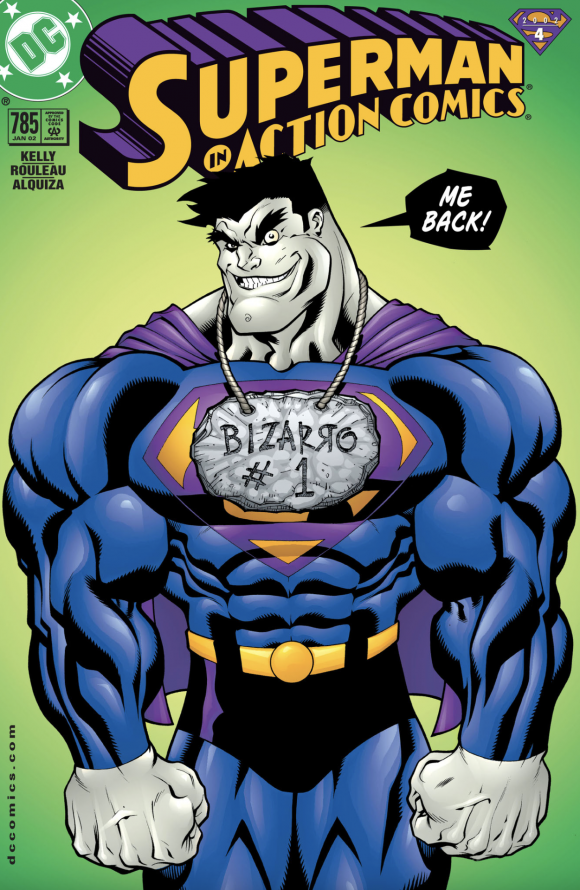 Action Comics #785, published in late 2001 during the Jeph Loeb-Joe Kelly tenure on the Super-titles, unceremoniously marked the end of a decade-long era for the Man of Steel: It was the last Superman comic to display a “triangle number” on its cover — a secondary numbering system that had denoted the correct reading order across Superman, Adventures of Superman, Superman: The Man of Steel, Action Comics, and even the quarterly Superman: The Man of Tomorrow. (Yes, later crossovers would occasionally resurrect the triangle numbering, but those instances were fleeting.)

At its best, the famed Triangle Era read more like an episodic Superman television show than a collection of titles featuring the same character. The books featured a rich supporting cast, consistent tone, compelling subplots that would gracefully ebb and flow, and a (mostly) grounded sensibility. At its worst? Look, even Electric Superman has his defenders, I’m sure.

This Summer and Fall, I finally closed what I long considered to be the biggest gap in my Super-fandom: the period between Crisis On Infinite Earths and The Death of Superman, including the dawn of the Triangle Era. I’ve been chronicling this reading project on my podcast Digging for Kryptonite. (13th Dimension editor-in-chief Dan Greenfield even joined me to break down the John Byrne Superman run.) Recently, a three-episode arc with guest Scott Honig covered the 150+ issues between Byrne and “Death.” Listen via your podcast platform of choice or watch on YouTube. 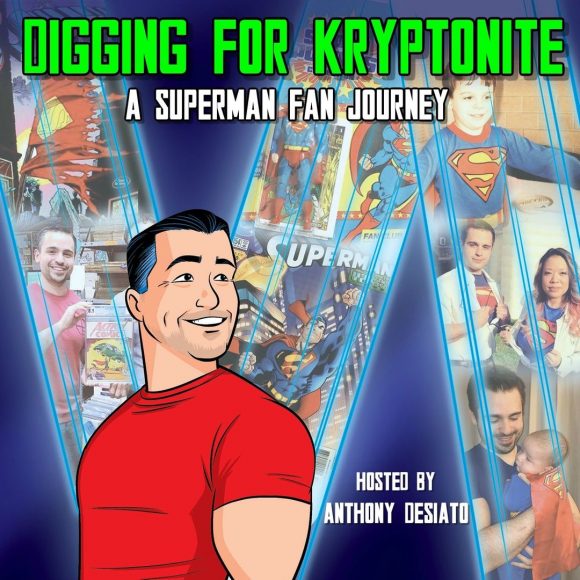 For this reader, it was during those post-Byrne years — including the “proto-Triangle Era” when the books worked in tandem but hadn’t yet formalized the numbering system — that the modern Superman truly solidified. The late ’80s and early ’90s finally advanced the romance between Lois and Clark (“Krisis of the Krimson Kryptonite”), explored Superman’s Kryptonian origins (the “Krypton Man” saga), and dealt with problems both next door (“Crisis at Hand”) and in the stars (“Panic in the Sky”).

Under the creative stewardship of Jerry Ordway (first solo and later with Tom Grummett), Dan Jurgens, Roger Stern (primarily with Kerry Gammill, Bob McLeod, and Jackson Guice), and Louise Simonson and Jon Bogdanove, the books fully realized the potential of post-Crisis Superman, quickly cementing this period of Super-comics as my all-time favorite.

Here are 13 REASONS TO REVISIT THE EARLY SUPERMAN TRIANGLE ERA:

13. Lex Luthor II. Not long after the Byrne/Marv Wolfman era reimagined Lex Luthor as an evil businessman rather than mad scientist, Superman’s greatest enemy morphs yet again when a cancer-stricken Lex fakes his death, then poses as his own Australian son in a cloned body. The level of subterfuge and manipulation Lex II engages in takes his psychopathy to a new level. 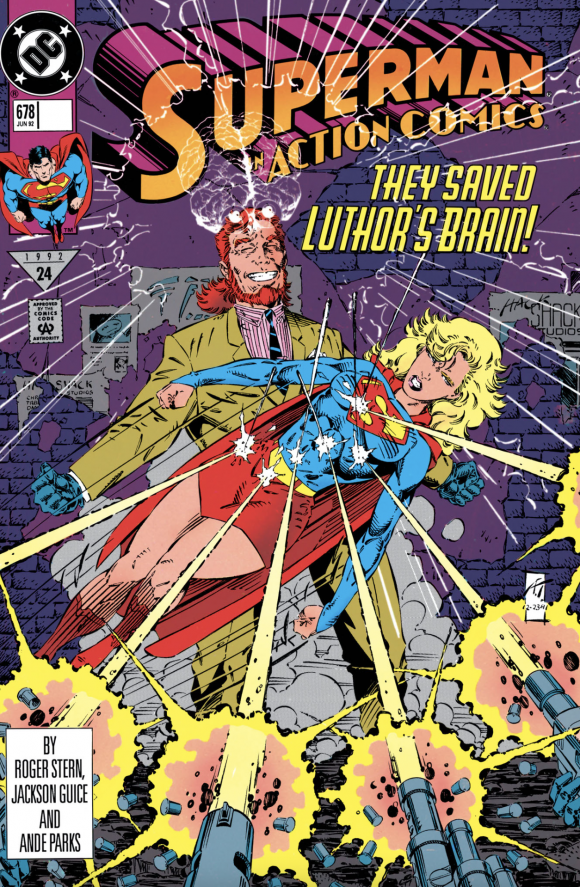 12. Consequences. “Exile,” the first major post-Byrne story, sees a guilt-ridden Superman banish himself from Earth after executing the evil Kryptonian trio during Byrne’s swan song. Not only does “Exile” capitalize on threads from the prior era, but it does so in a gripping, nuanced story that powerfully mines the psychological fallout of Superman’s actions. 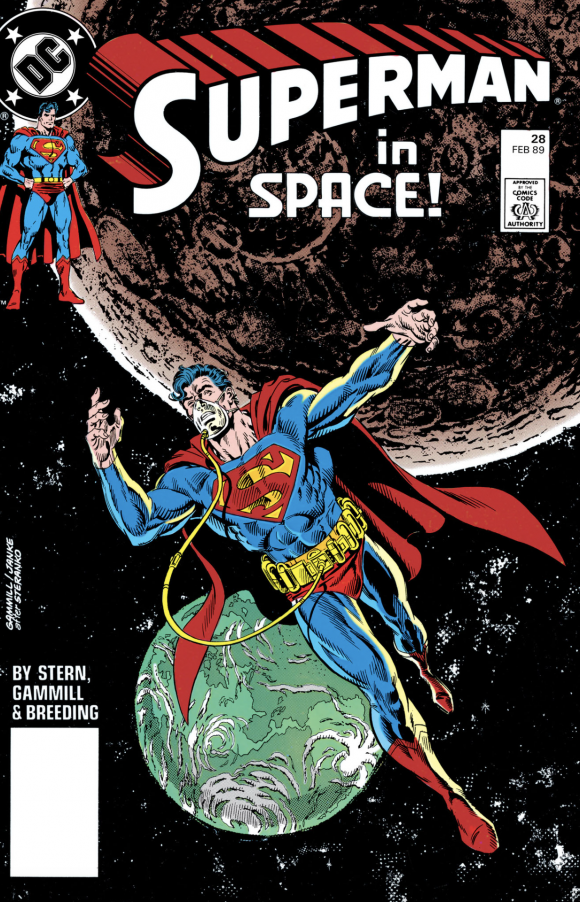 11. Bingeable. If stories like Kingdom Come and Birthright read like movies, then the Triangle Era is a bingeable television series, with a potent mix of standalone installments, continuing subplots, and big event storylines weaving together to reward readers’ long-term investment. 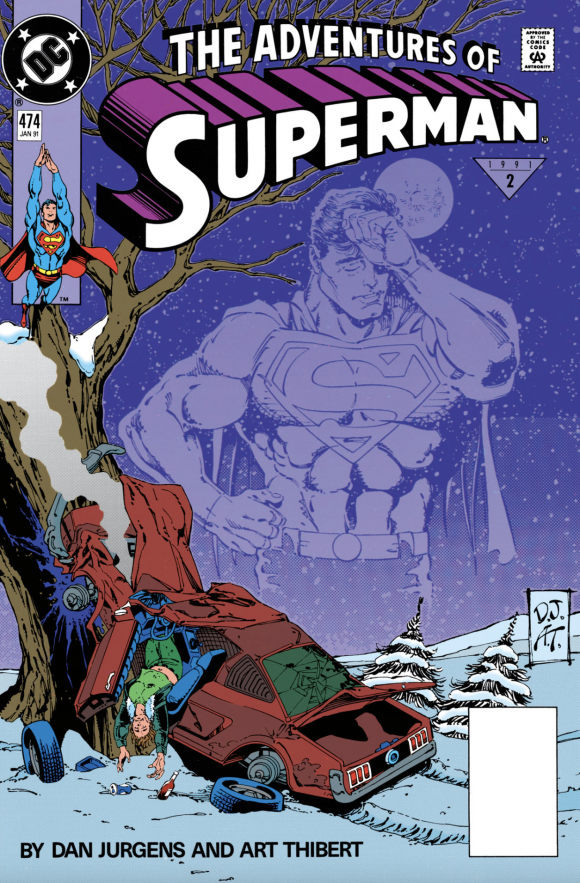 10. Urban Planning. It’s often confined to subplots, but the creative teams explore the inner workings of Metropolis at a granular level, with stories involving Lex’s hostile corporate takeover of a S.T.A.R. Labs facility, an economic recession following Lex’s “death,” a union strike by the Daily Planet pressmen, gang violence, the depressed state of Suicide Slum, and more. This level of detail brings Metropolis to life and treats it as a character in its own right. 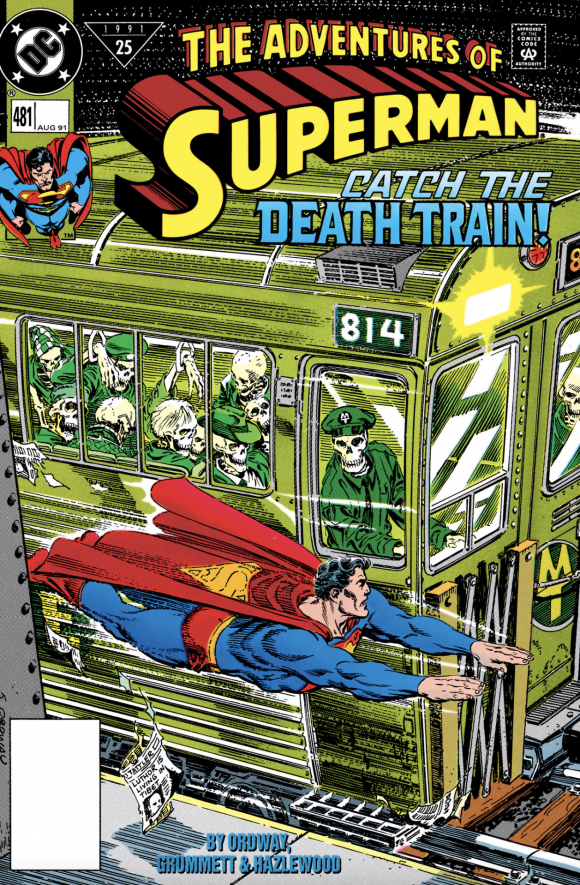 9. World’s Finest Redeemed. No disrespect to any Magpie fans out there, but the first post-Crisis meeting between Superman and Batman in Byrne’s Man of Steel miniseries did not befit the World’s Finest. Thankfully, “Dark Knight Over Metropolis” more than makes up for it, teaming the characters up for a murder investigation and ending with the now-iconic moment of Superman entrusting Batman with a Kryptonite ring to be used if Superman ever loses control. 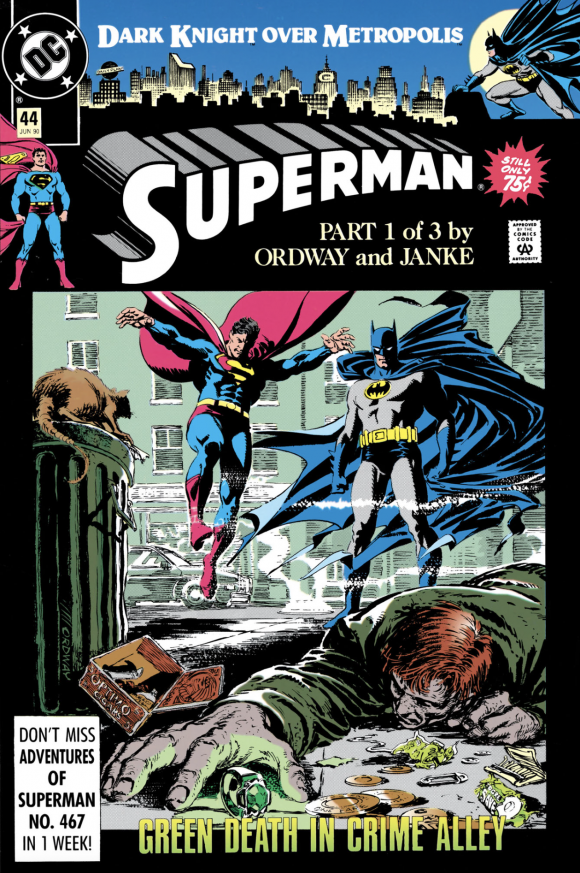 8. Super Subplots. This period mastered the art of the subplot, with B-stories such as Jimmy Olsen’s unemployment and eventual homelessness, Perry White’s family loss, and Bibbo Bibbowski’s lottery win serving as connective tissue between crossovers, when the titles often pursued their own A-stories. 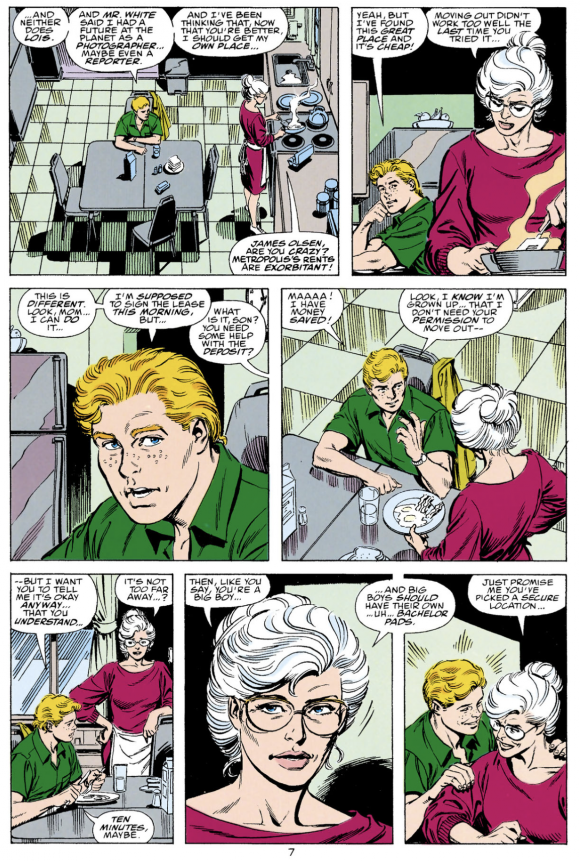 7. Kents in Action. The creative teams here finally unlock the potential of having Jonathan and Martha Kent alive post-Crisis, whether they’re advising Clark on how to deal with an abusive husband next door, cruising at sea with Perry and Alice White, or even hopping on a plane to help Clark when he succumbs to the influence of the Eradicator. 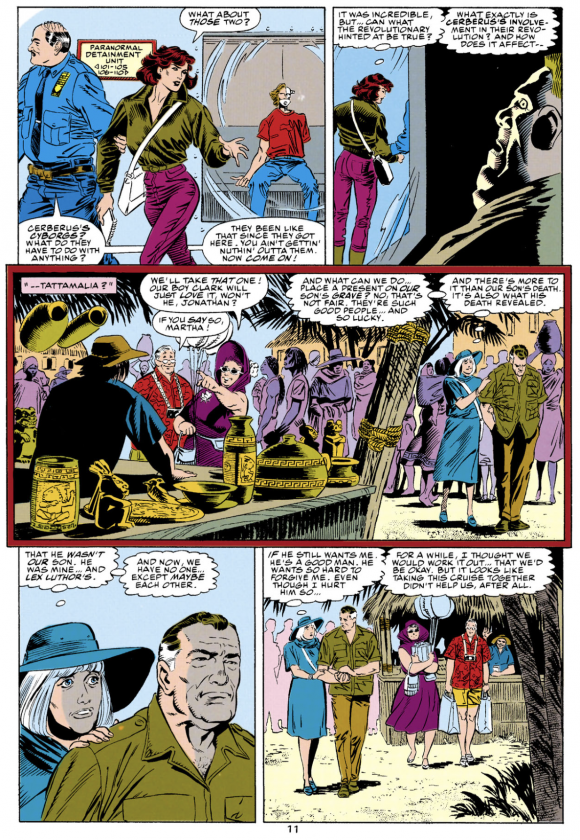 Superman: The Man of Steel #3

6. They Finally Go There. Admittedly, Lois and Clark go from a couple of dates to engaged VERY fast, but once they settle into their relationship — and especially once Clark reveals his secret identity at last — the new dynamic opens up a refreshing and long-awaited angle of storytelling that endures to this day (even overcoming the New 52). 5. Art Appreciation. While the first couple of post-Byrne years employ a relatively consistent visual look (not a knock), by the time we approach “The Death of Superman,” the four titles have each carved out their own artistic identities — from the youthful style of Tom Grummett to the more mature, sultry lines of Jackson Guice, and from the Joe Shuster-esque stylings of Jon Bogdanove to the definitive modern take of Dan Jurgens. 4. Seeds for the Future. It’s a well-known tale at this point that the Super-teams pivoted to “The Death of Superman” when their planned wedding story was delayed, but it’s seamless how many pieces were already in place to be exploited for “Death” and the subsequent Reign of the Supermen: Hank Henshaw’s (the eventual Cyborg Superman) consciousness shoots off into space, passing through Superman’s birthing matrix on its way; the Eradicator’s raison d’etre to preserve all things Kryptonian is firmly established; and a psychologically compromised Superman unknowingly masquerades as Gangbuster, making it much more believable that he could be one of the four replacement Supermen during “Reign.” 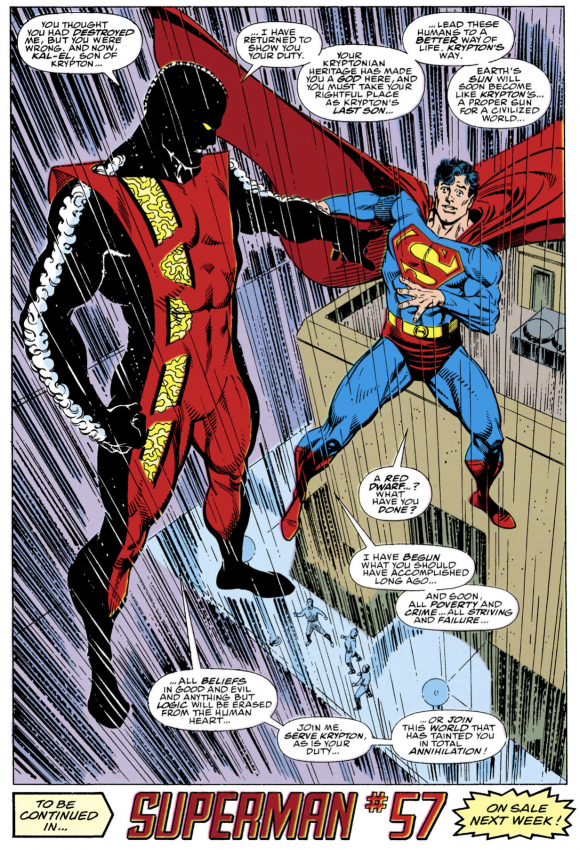 3. Why Superman. “Why be a Superman?” Lois asks Clark when they finally have a moment to breathe and discuss their relationship in Superman #59. “Because no one else can,” he replies, in a simple, powerful moment that illuminates a core truth of this iteration of the character. It also pays off at the climax of The Death of Superman years later, when Lois pleads with Superman to retreat, but he counters that he’s the only one left standing who can stop Doomsday.

2. Man of Two Worlds. Byrne leaned very heavily into Superman’s human side, even going so far as to establish that he was technically born on Earth in his birthing matrix. Here, Ordway and company effectively play up the tension between the character’s alien origins and earthly upbringing as Superman fends off the Eradicator’s attacks (both psychological and physical), learns more about his home planet from the ancient Cleric, and takes ownership of the Fortress of Solitude, which had previously been MIA post-Crisis. 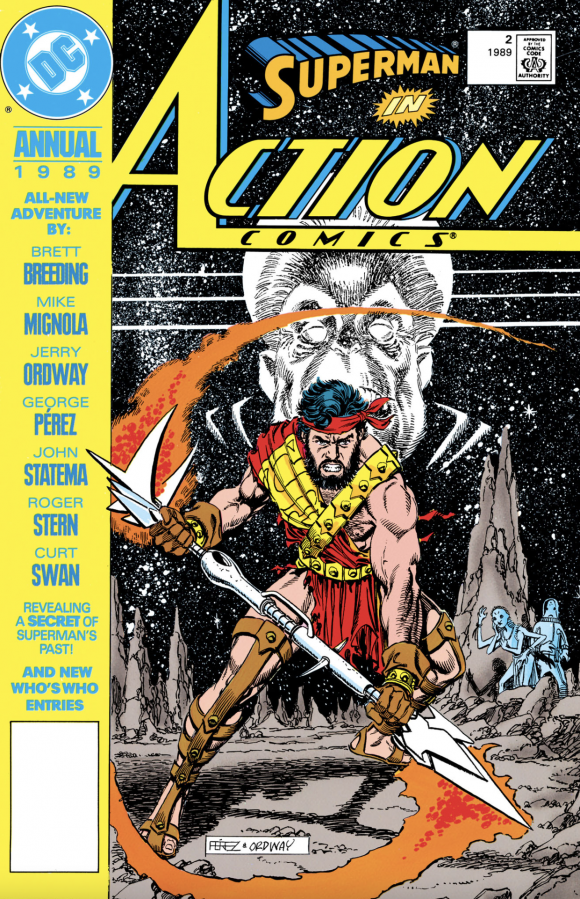 1. Supporting Cast. The greatest asset of this period in Superman comics is the robust supporting cast populating the titles, from mainstays like Lois, Perry, and Jimmy to new additions Cat Grant, Maggie Sawyer, Jose Delgado (aka Gangbuster), Bibbo Bibbowski, Professor Emil Hamilton, and the Matrix Supergirl. While all of these characters were already in play during the Byrne/Wolfman period, the early Triangle Era continues to nurture them. By surrounding Superman with so many familiar faces, the creative teams inject a relatable human interest element, build a more colorful, textured Metropolis, and highlight Superman’s own humanity through his interactions with his friends and allies. Anthony Desiato is a documentarian, podcaster, and lifelong Superman fan. He hosts the podcasts Digging for Kryptonite and My Comic Shop History, available on most major podcast platforms and in video form on YouTube. His most recent documentary film, My Comic Shop Country, is out now on Amazon, Apple TV, and CuriosityStream. Visit Flat Squirrel Productions for more.

For his Digging for Kryptonite episode on the Triangle Era, click here.