We’d like to welcome a new writer to 13th Dimension! He’s got some forceful thoughts on Marvel’s prolific Star Wars output. (Hell, two titles came out this week alone.) So let’s get to it, shall we? — Dan

Maybe Marvel’s Star Wars titles aren’t better than the movies, but they’re certainly just as good. And fans who are still bitter about the prequels might contend that these comics are more consistently awesome. Some of the best creators in the business are actively shaping the new Star Wars canon, including Jason Aaron, Kieron Gillen, Stuart Immonen, Phil Noto, Charles Soule, Greg Rucka, John Cassaday, Terry Dodson, Salvador Larroca and many more.

Without further fanfare, here are 13 inarguable reasons Marvel’s Star Wars comics are so satisfying to longtime fans of the franchise:

1. The Journals of Obi-Wan Kenobi. Did you ever wonder how Luke progressed as a Jedi before he visited Yoda on Dagobah? He recovered Obi-Wan’s journals, which were written during the crazy old hermit’s years in exile on Tatooine. Presented in standalone issues, these stories could eventually be the groundwork for a solo Obi-Wan movie. 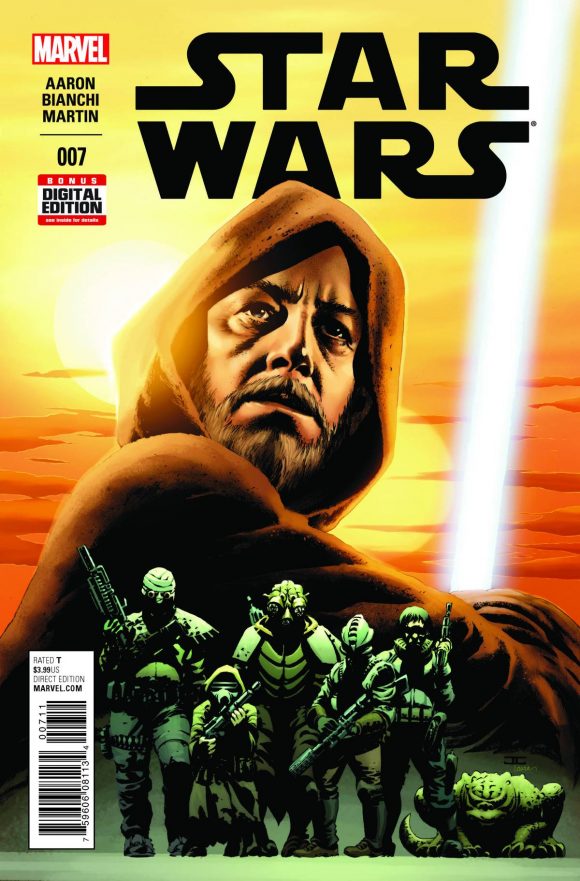 2. Vader’s Son. Darth Vader hires Boba Fett to suss out the identity of the Rebel pilot who destroyed the Death Star. The Sith Lord then cracks one of the Executor’s windows with Force rage when he finally learns the truth that’s been kept from him for a generation. 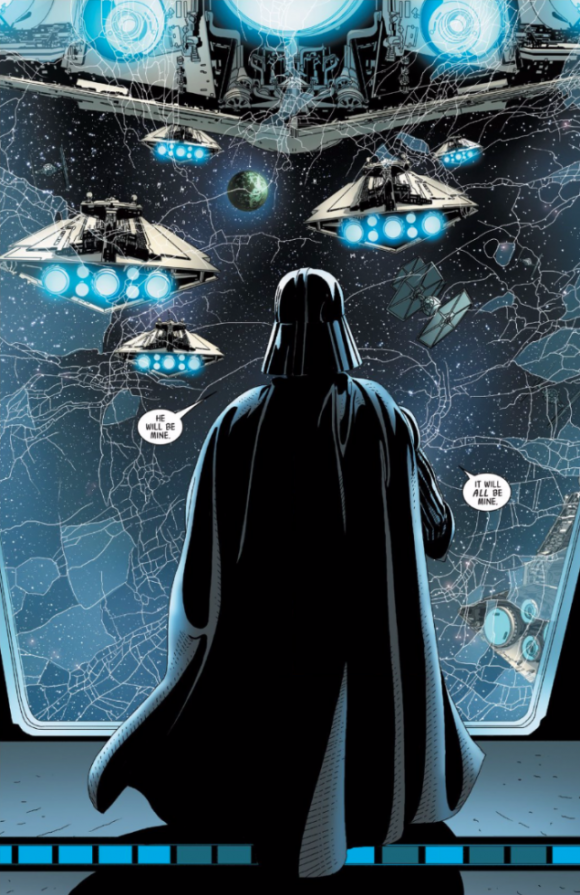 3 and 4. Dr. Aphra and Her Assassin Droids. The best Star Wars comics always offer the thrill of new characters (see other items on the list). None are more compelling, however, than Dr. Aphra and her two assassin droids, 0-0-0 and BT-1 (Triple Zero and Bee-Tee). Fans sad that the Darth Vader series is over can take solace in the forthcoming Dr. Aphra title. 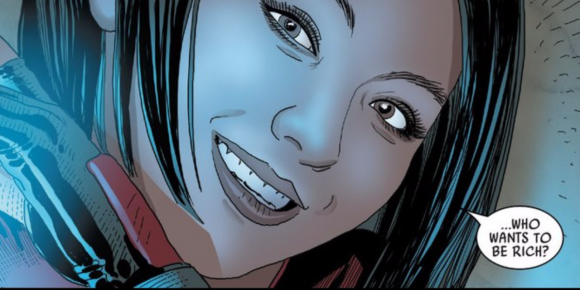 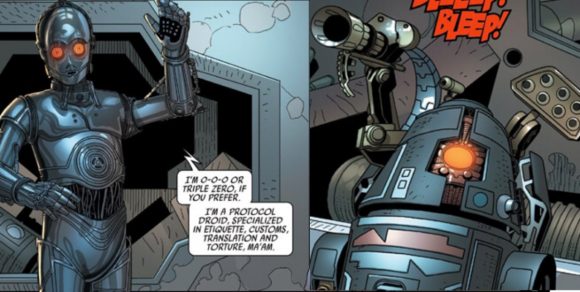 5. Luke vs. Boba Fett. Luke returns to Obi-Wan Kenobi’s hut on Tatooine to reclaim the Jedi’s journals, and that’s where Boba Fett, tasked with finding the young pilot, finally tracks him down. Obviously, we all know Luke survives—but how? The Force, of course!

6. Grakkus the Hutt.I , for one, am overjoyed to finally encounter a butt-kicking Hutt. Jabba just sits there and eventually is choked to death by a tiny human. Ziro the Hutt? Why, he’s just another whiny—albeit colorful—slug. But Grakkus, my friends, is 100% heavyweight. Don King and Mike Tyson wrapped in one. 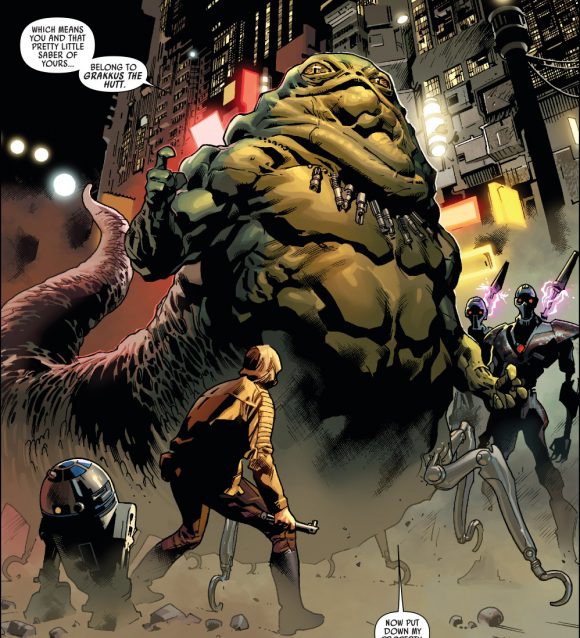 7. Chewbacca: A Hairy Moses. Chewbacca, flying solo (that is, sans Solo), lands on a planet to make a few small repairs, goes quasi-hippie and chills in the fields of flowers for a bit, and then finally gets roped into helping a little girl overthrow her people’s captors. Like an especially hairy Moses, Chewie soon leads the slaves to freedom. He remembers what it’s like to live in chains. 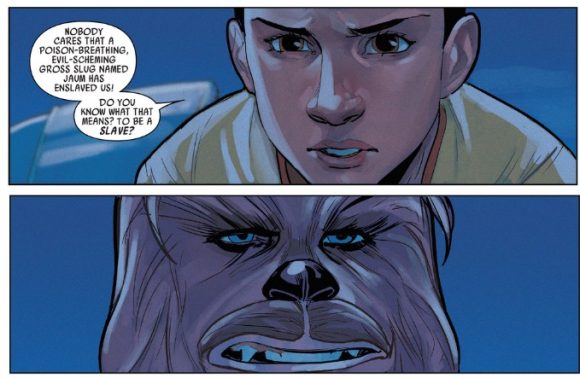 8. Black Krrsantan: The Other Wookiee.He’s Chewbacca without the heart of gold, with skills forged in the fighting pits (think dog fights), where discerning attendees always bet on black. Now a bounty hunter, he’s said to be Boba Fett’s equal—and he has certainly earned Boba’s respect. 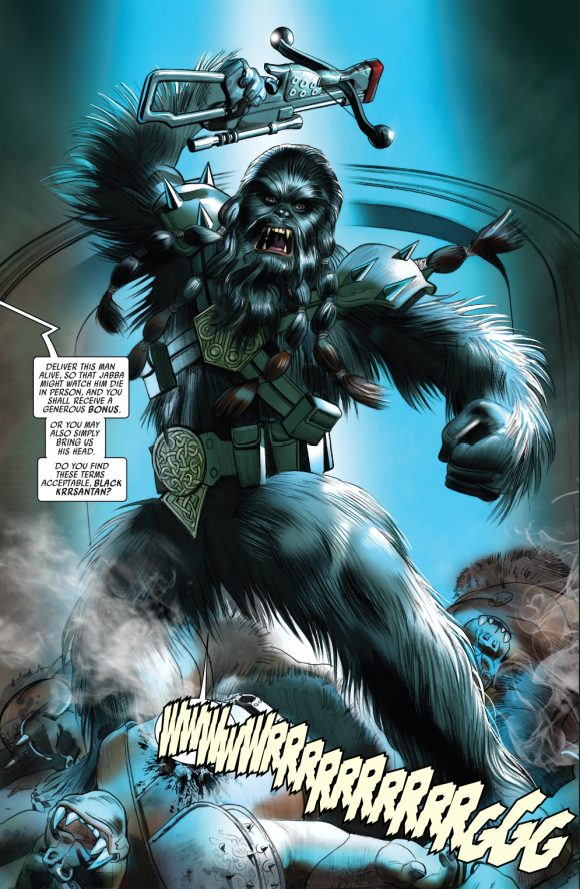 9. Sana Starros: Han Solo’s “Wife.” They were “married” as part of another intergalactic scam, but Solo made off with her half of the loot and now denies they were ever husband and wife. She catches up with Han and Leia with a score to settle. 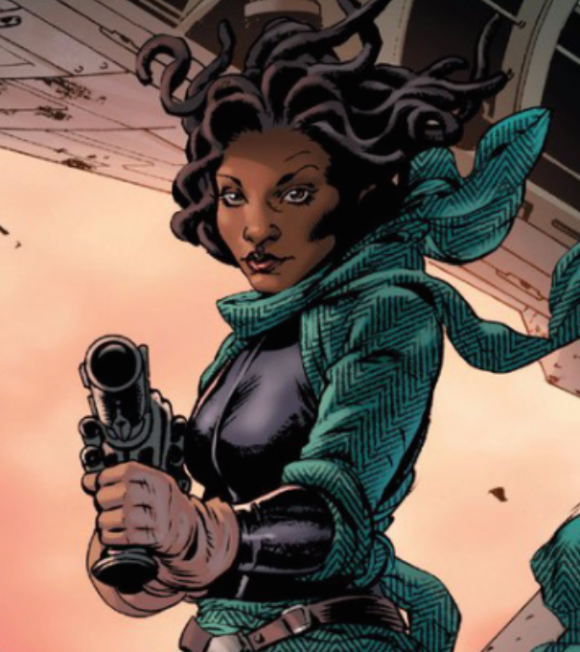 10. Princess Leia and Alderaan’s Ex-Pats. Not every Alderaanian was on the planet when it exploded. Some were scattered across the galaxy, including the inimitable Evaan Verlaine, who becomes Princess Leia’s pilot for one important mission.

11. Theft of the Imperialis.In his own miniseries, Lando Calrissian steals Emperor Palpatine’s space yacht full of Sith relics, and it goes as badly as you might expect. Also, poor Lobot’s origin is more fully explained. 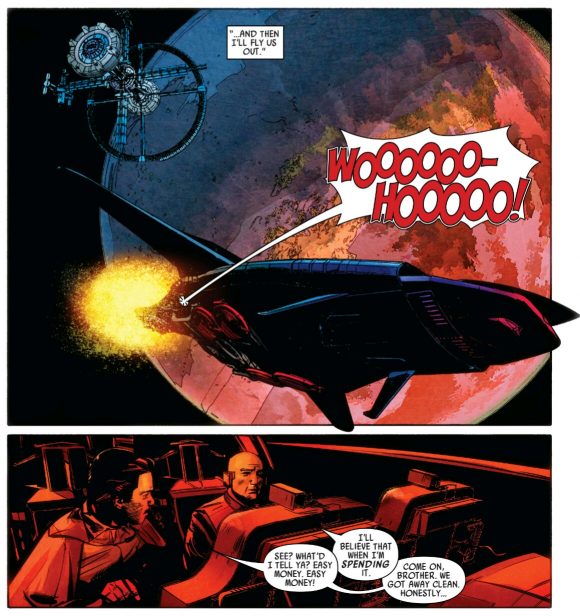 12. Mo’ Poe? No Problem.I know a certain comic-shop owner in Muncie, Indiana, who can’t get enough Poe Dameron. Some people say Marvel Comics launched Poe’s ongoing series just to keep her happy. Not me. I’m not saying that. But some people are. Apparently she’s not alone. Good thing J.J. decided not to kill him off. 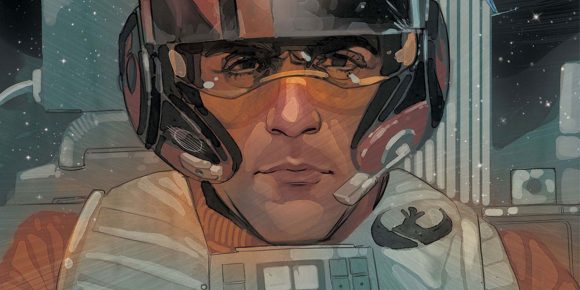 13. Poe’s Parental Units.In Shattered Empire, which follows the events of Return of the Jedi, we meet two new-to-us Rebels who just happen to be Poe’s mama and daddy. They’re nearly as cool as Poe himself—and almost as pretty, too.