Spoiler: The first one was better …

1. For the second trailer in a row, Gal Gadot’s Wonder Woman is the best part. I really, really hope that pays off. 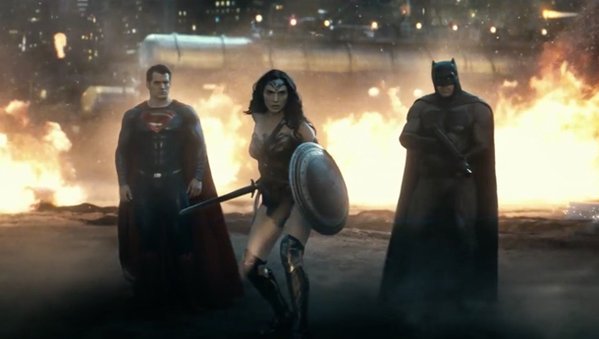 2. I never, not once, ever thought of Batman as a xenophobe and I’m really hoping this is a passing thing for the trailer crowd. Sure, you can be wary about the notion of absolute power corrupting absolutely, but  the way Bruce spat out the word “alien” was disconcerting.

3. I wonder about the overall appeal of this movie for mainstream audiences. A friend of mine who enjoys superhero movies and shows but is otherwise a “civilian” texted me: “What is this Batman vs. Superman thing? It is like God vs. Jesus.” She may be one person but I have a hunch that there will be a lot of people like her.

4. Civil War will succeed because the Marvel folks have been building toward it. That contrived conflict will at least feel organic and might intrigue general audiences who can bet on being entertained by a franchise that consistently rewards them. Batman vs. Superman may play more to die-hards and “Who Would Win …” types.

5. Still, it’ll be a hit unless reviews are savage.

6. Reviews better not be savage because the entire future of Warner Brothers’ cinematic universe is riding on this.

7. Man, I gotta ask: Is it the water? Marvel/Disney is killing DC/WB in the quality TV department, too. I watched the first half of The Flash/Arrow crossover last night. I usually like The Flash a lot but after finishing Jessica Jones, it just felt thin and childish. I hope Marvel/Netflix isn’t ruining DC TV for me.

9. And Doomsday looks terrible. I mean, he’s only a step up from King Shark on “The Flash.”

10. And I just know I’m going to hate Jesse Eisenberg’s Lex Luthor. Not love to hate him. Hate him. Ew.

11. Did I mention that Gal Gadot’s Wonder Woman saved the trailer?

12. Clark Kent’s not much of a reporter if he doesn’t know who Bruce Wayne is in this universe. Even if he’s “new.”