REVIEW: A worthy addition to the modern wave of classic Batman TV merch…

Slowly but surely, Mezco’s deluxe set of 3.75-inch Batman ’66 figures is making its way into collectors’ hands, nearly a year and a half after it was announced. (Damn supply chain issues.)

What does it include? Seven action figures with five points of articulation each — Batman, Robin, Alfred, the Joker, Penguin, Catwoman (Julie Newmar) and the Riddler (Frank Gorshin) — plus a scale-size Batmobile, a cardboard Batcave diorama, Batpoles, and a whole bunch of neat accessories. 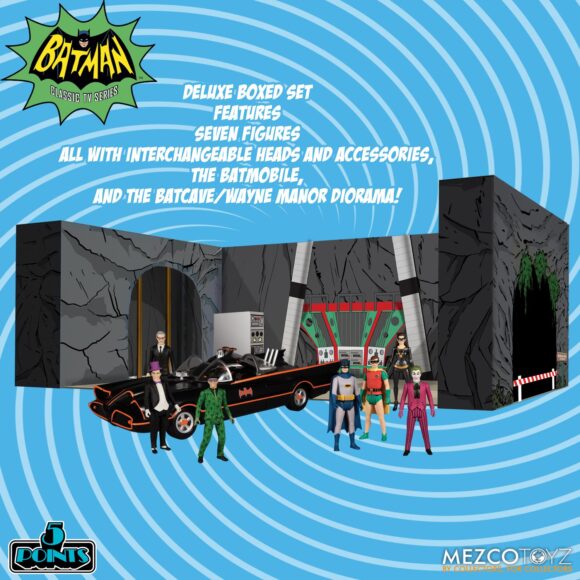 So, now that it’s here, the natural question is whether it’s worth the $130-$140 price tag (depending on the retailer). That always comes down to your own personal financial situation, but here are 13 QUICK THOUGHTS on the set from Mezco’s 5 Points line.

1. This is a set I never expected to see but am glad it exists. Once Funko bailed on its run of Batman ’66 3.75-inch figures a few years back, I figured that was that. We got the main three heroes, but, other than Catwoman, most of the villains were secondary, like King Tut and Bookworm. Those characters are cool but no set is complete without the Fearsome Foursome. So for Mezco to step in and give us the missing Joker, Penguin and Riddler (plus Alfred, the faithful butler) is smashing. 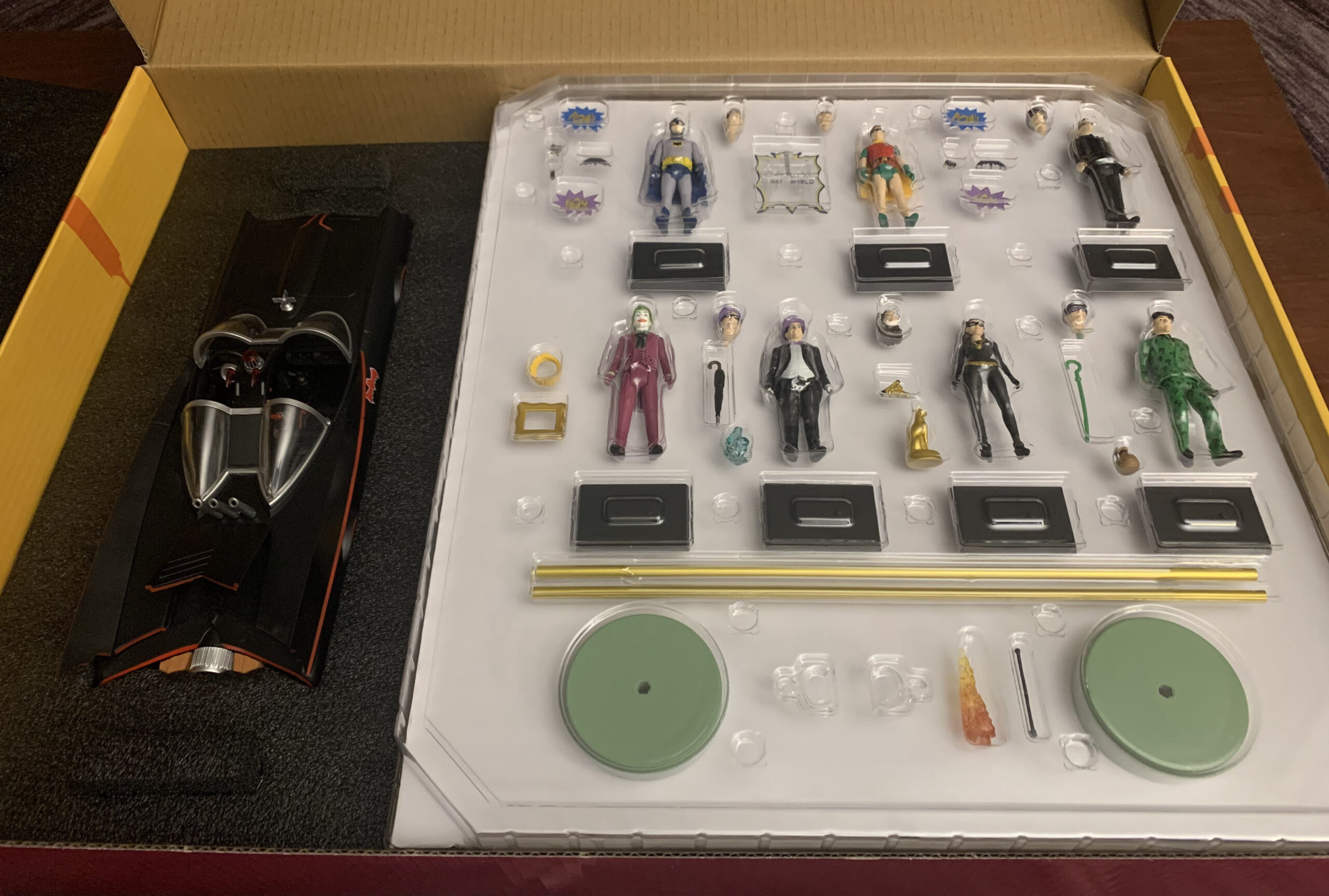 2. The box is huge, so you’ll need some room to store it, in addition to finding a place to display everything. I kind of consider that a fun problem to have but either way, I really dig the go-go design… 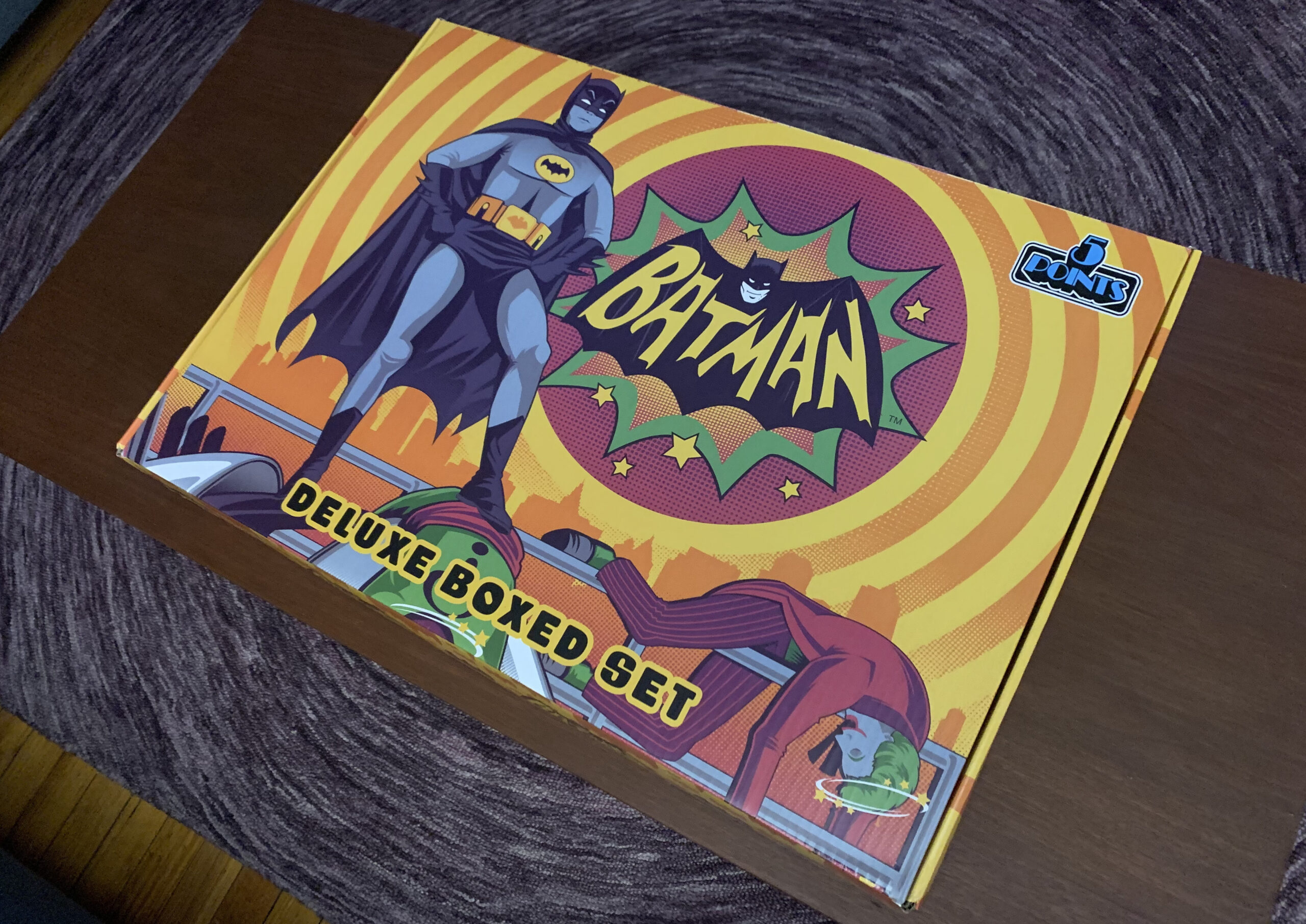 … which is clearly patterned after Life magazine’s March 11, 1966, spread on the show. That’s a really nice touch: 3. I do wish the Riddler was in his classic jumpsuit. That’s still the classic 1966 look, with the suit and tie a snazzy alternative. This Riddler is plenty cool, mind you, but in my heart of hearts I hope to see the more basic look as a convention exclusive down the line or something. I don’t expect that to happen at all, but I’d be happy to be wrong. (By the way, if you look closely on the left, you can see Cesar Romero’s painted-over mustache on the Joker. Nice.) 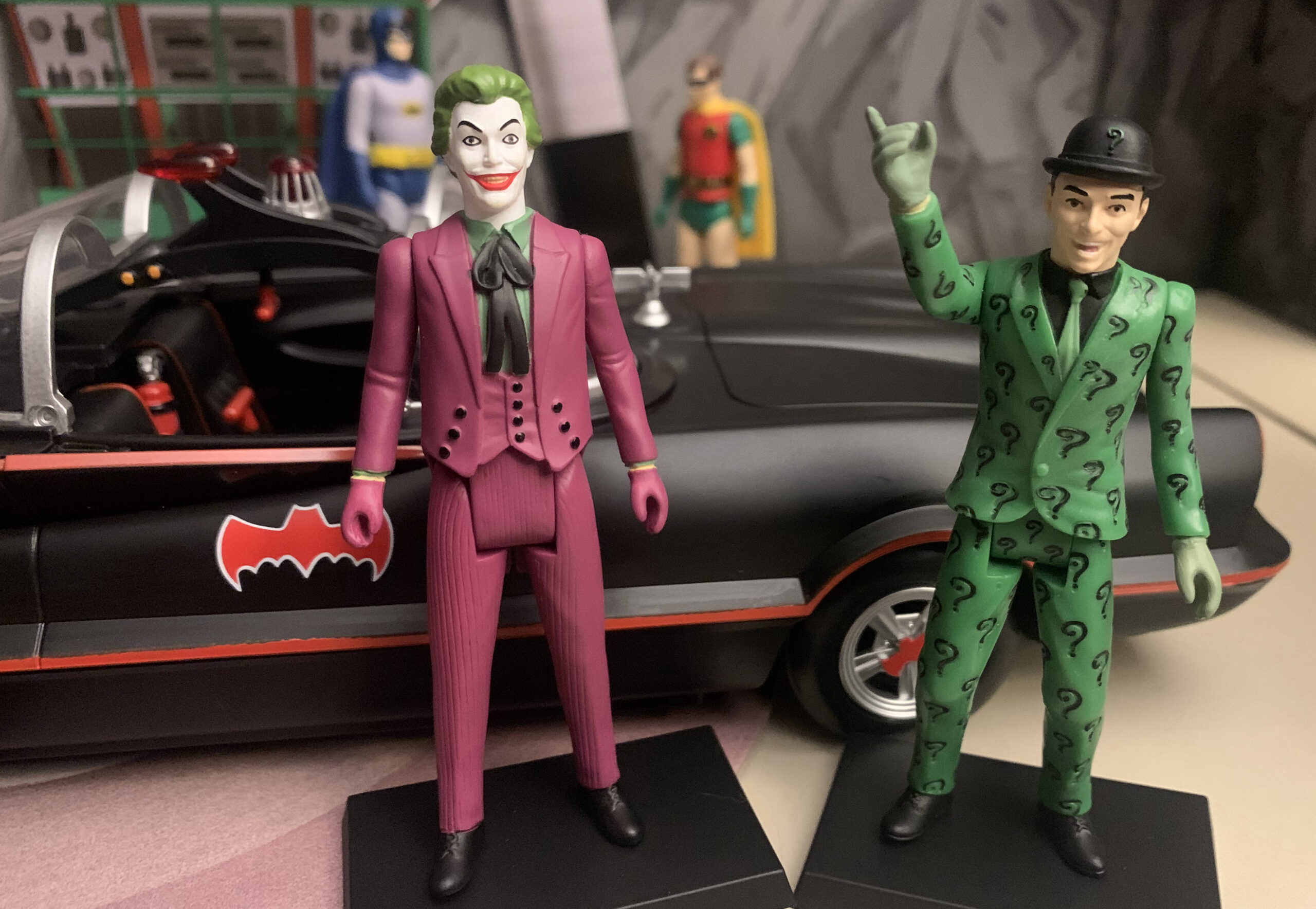 4. I’m not going to do a figure by figure comparison of Funko’s and Mezco’s offerings. On the whole, I prefer Mezco’s – especially Batman himself. The main difference is in the production value: Funko’s were made to be sold individually at mass market. This set, on the other hand, is for the hardcore collector, so Mezco’s figures are more delicate, for good or bad, and generally more attractive. Still, I plan to include most of those Funko figures, like Batgirl, Mr. Freeze and the other villains, when I display this set. 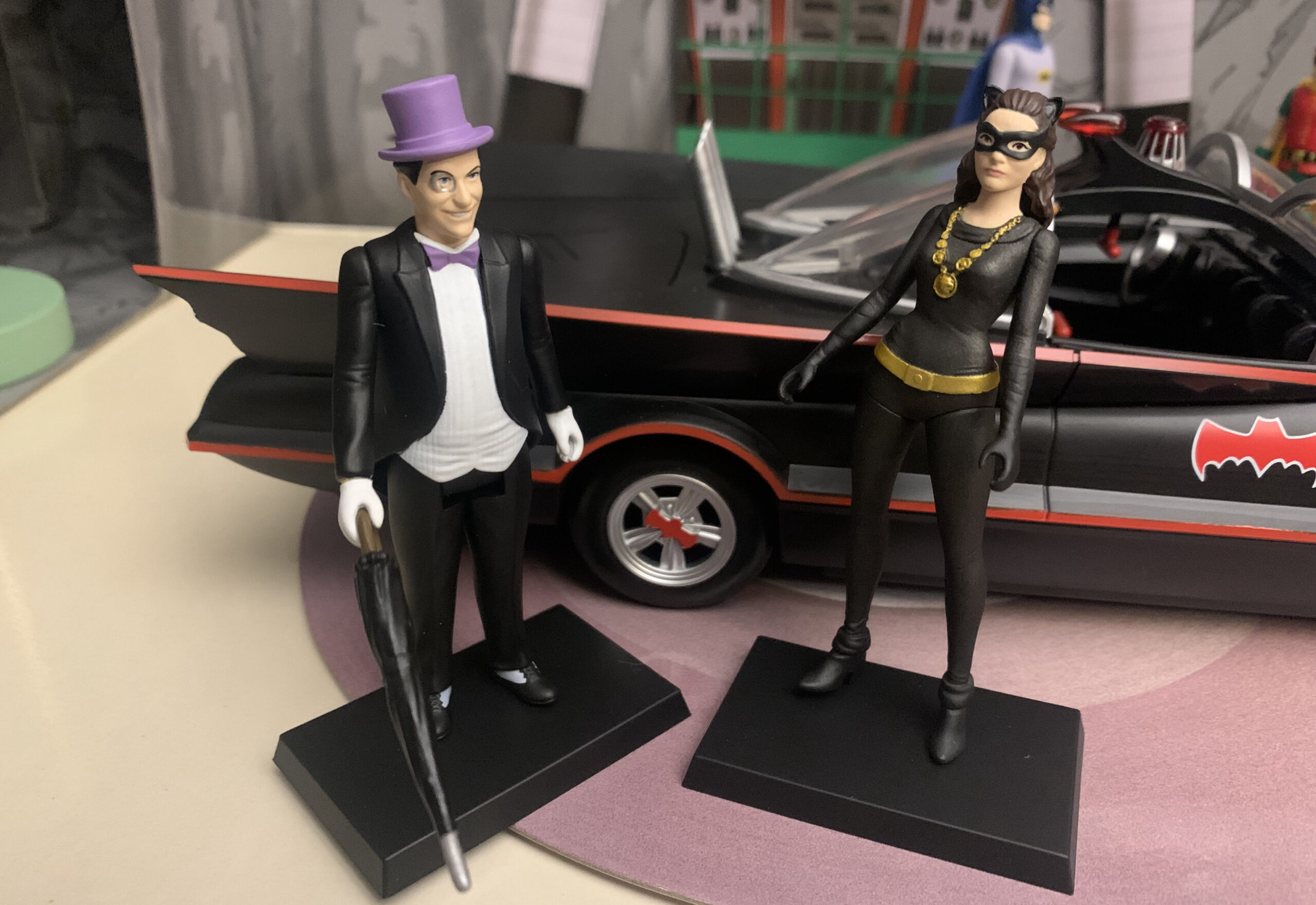 5. Speaking of displaying, I’m not sure how I’m gonna do that. There are at least two solid options: the Batcave diorama that comes with the Mezco set or, as many have pointed out online already, McFarlane’s recent Batcave playset, which, while designed for 6-inch figures, is really more in scale with the 3.75s. Recurring 13th Dimension contributor Chris Franklin — who just a couple months ago wrote the TOP 13 BATCAVE PLAYSETS EVER — RANKED — has a great solution: Use both! 6. The McFarlane Batcave has obvious advantages: It’s 3-D and it comes with a load of equipment. (Mezco’s Batcomputer and anti-crime machinery are cardboard that you have to fold into shape. It’s cute but not as effective as mini plastic replicas.) Still, I really love the concept of the Mezco layout: It’s comparably lo-fi but it reminds me of the Mego Batcave (the greatest toy ever) and even the pre-Mego days when I decorated a shoebox to create a Batcave for my Corgi Batmobile. 7. Ah, yes, the Corgi Batmobile. There are SO MANY 1966 Batmobiles out there in different scales that I really wasn’t sure whether one was needed in this set. But I really dig that Mezco’s Batmobile is essentially an homage to the Corgi classic – complete with exhaust “flames” that move when the wheels are in motion, and, even more fun, a buzzsaw that pops out of the front when you press the Batbeam in front of the windshield. (Sadly, but understandably, there are no rockets. They were always a pain.)

It’s also worth noting here that Batman and Robin’s capes are made of soft rubber, so the Dynamic Duo can sit easily in their ride. 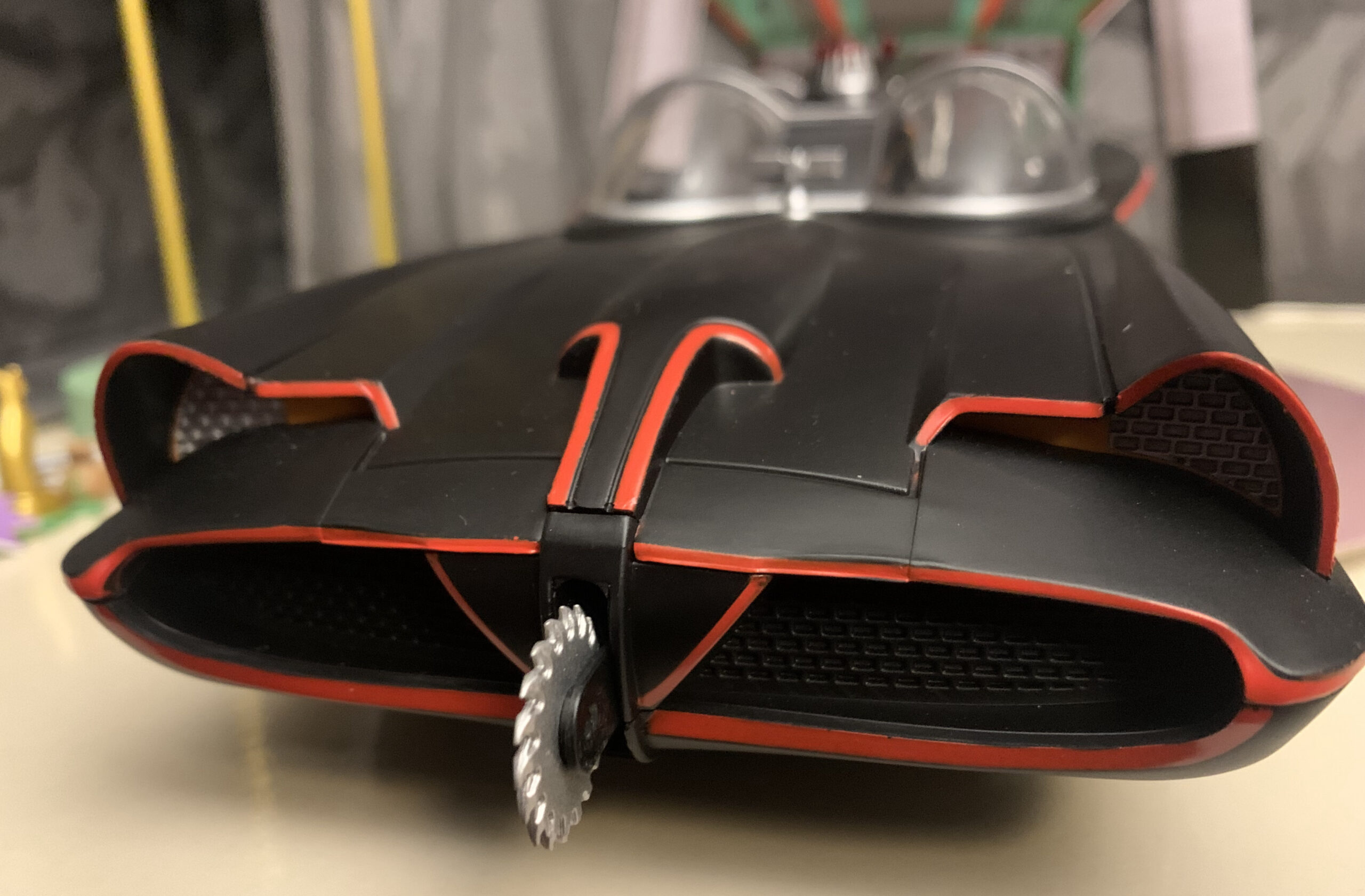 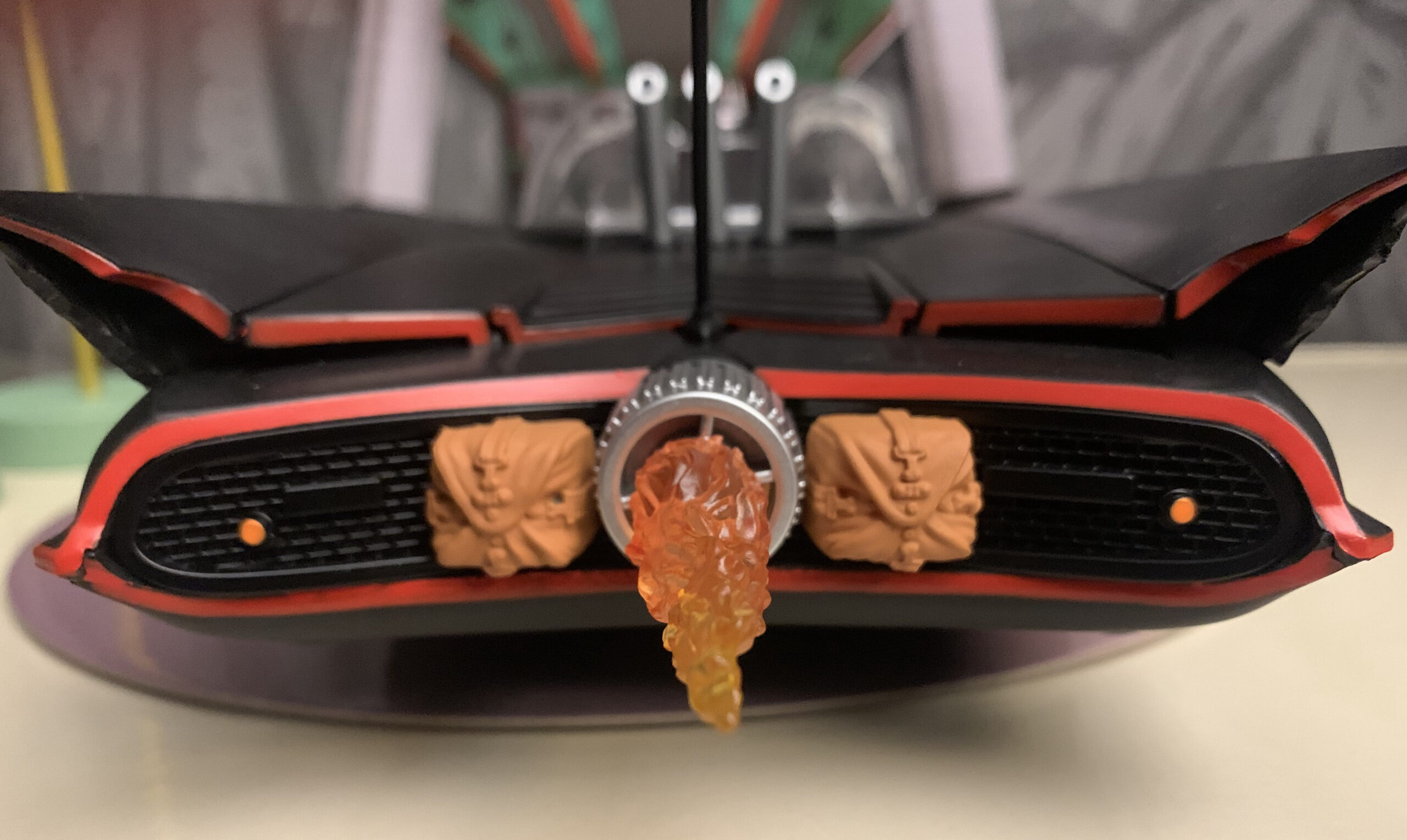 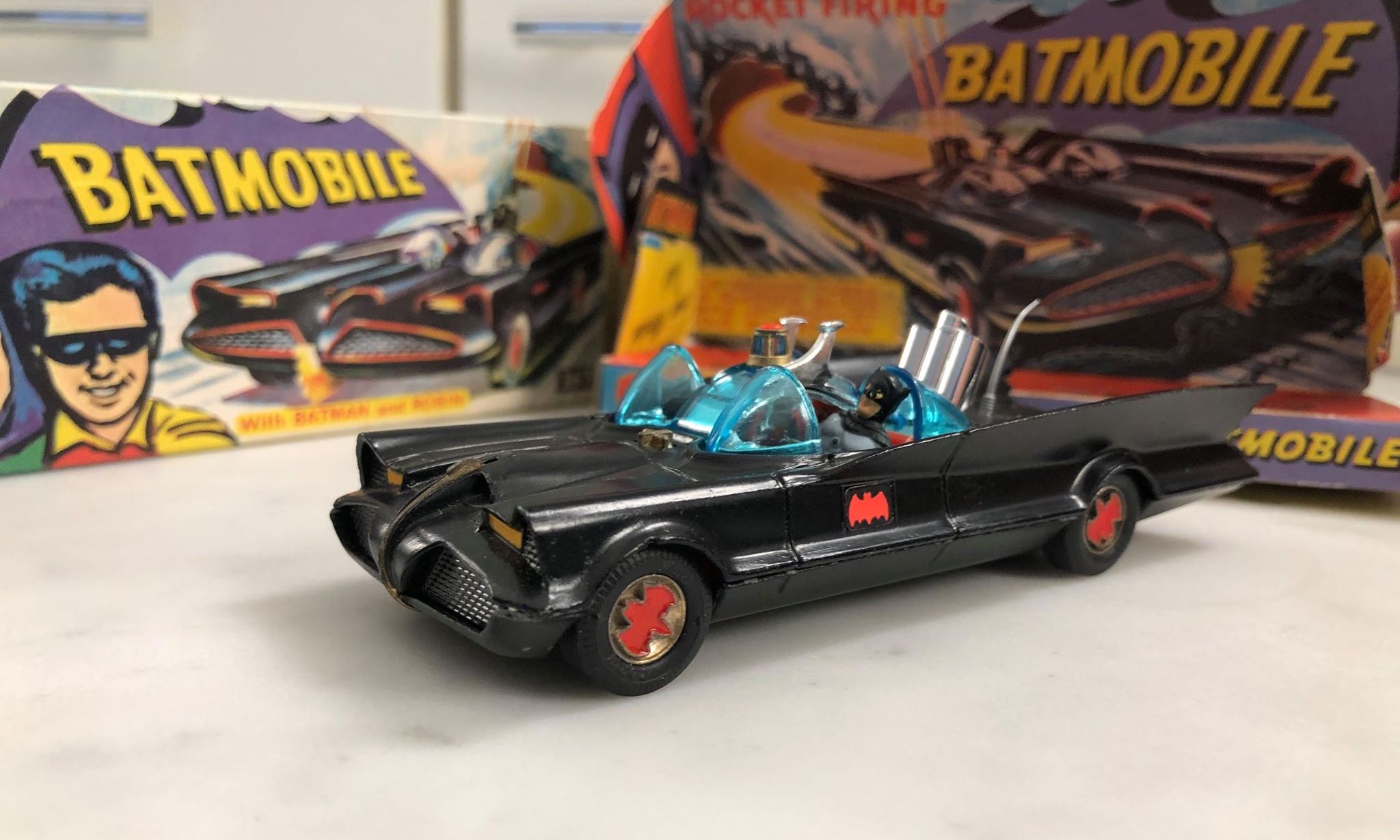 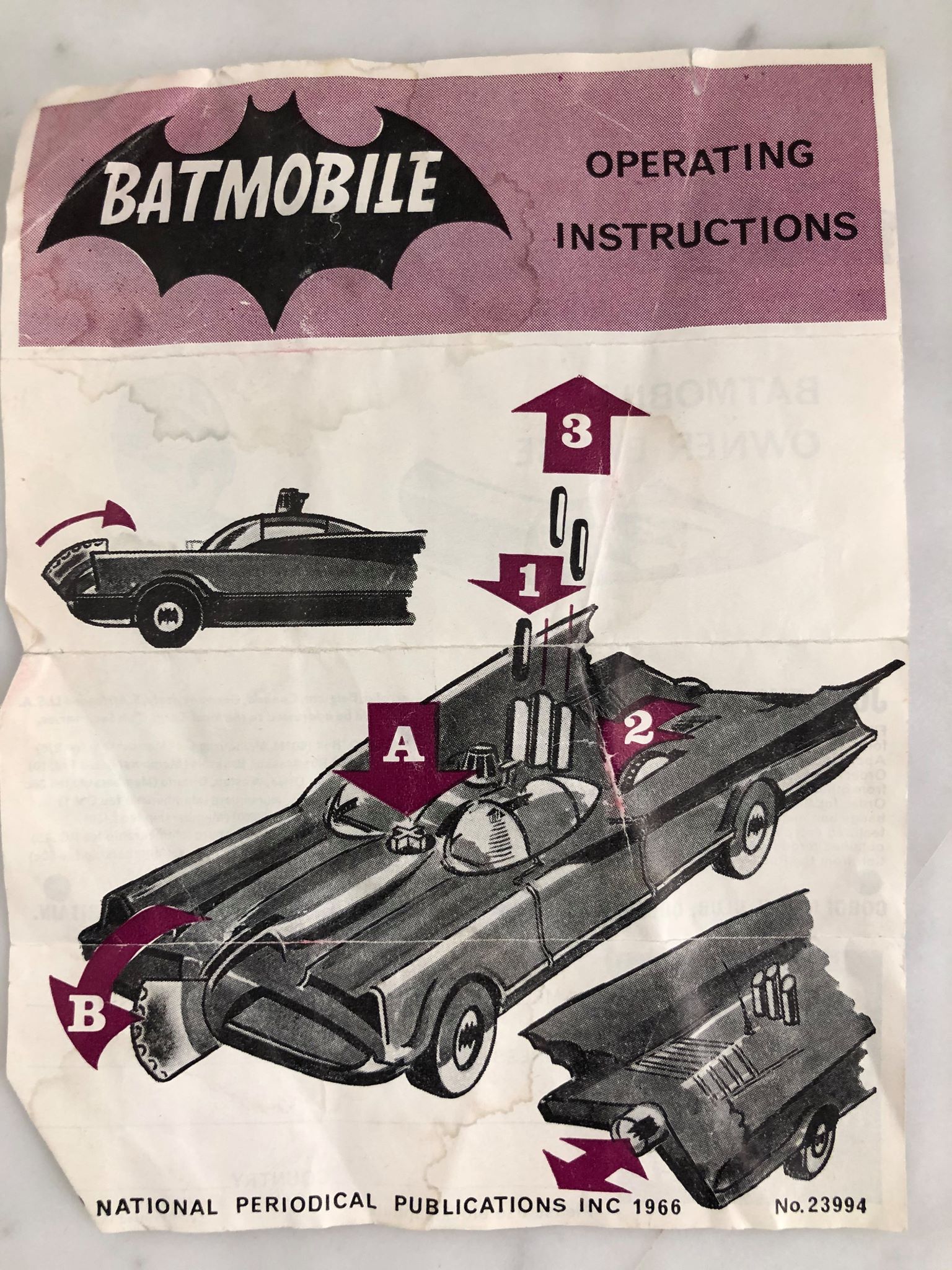 8. Back on the Riddler for a second: Not to belabor the point but as much as I love Alfred, I’d rather we’d gotten the Riddler in both outfits instead. (Also, I’m fairly sure Gorshin never wore the mask with the suit and tie. His extra head is masked.) But this is quibbling because Alfred is awesome and it’s fun having him in this scale.

Alfred inspects the Stately Wayne Manor grounds (the rear of the diorama).

9. Among the best parts of the set are those interchangeable heads: Everybody but the Joker gets one (which is too bad!). Yes, we never saw Batman and Robin with their masks off and, as I noted, the Riddler went mask-free in his suit and tie – but so what? It’s fun! Regardless, I get a bang out of having choices for the Penguin and Alfred. And with Julie Newmar’s Catwoman, having two different heads is essential. 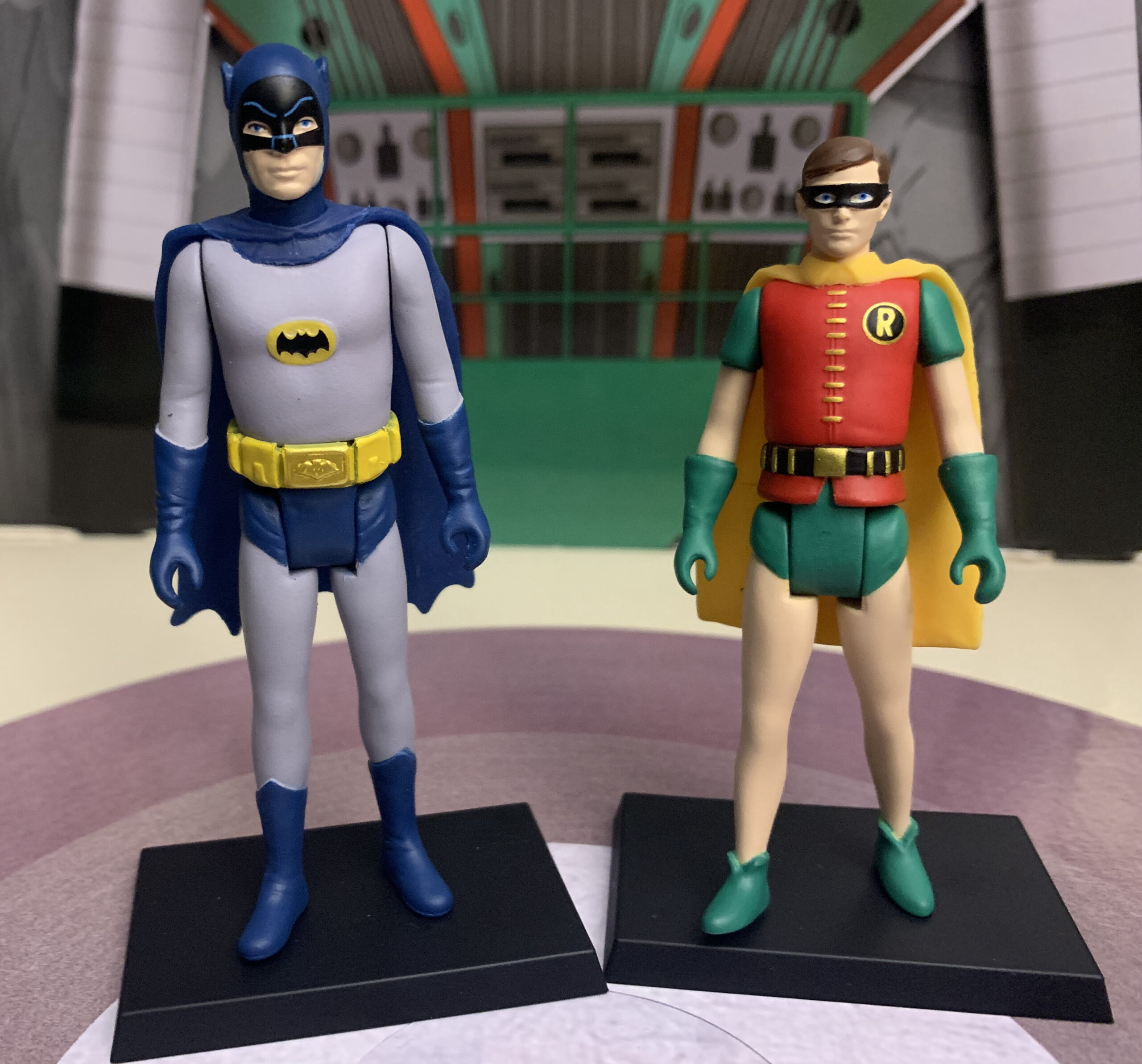 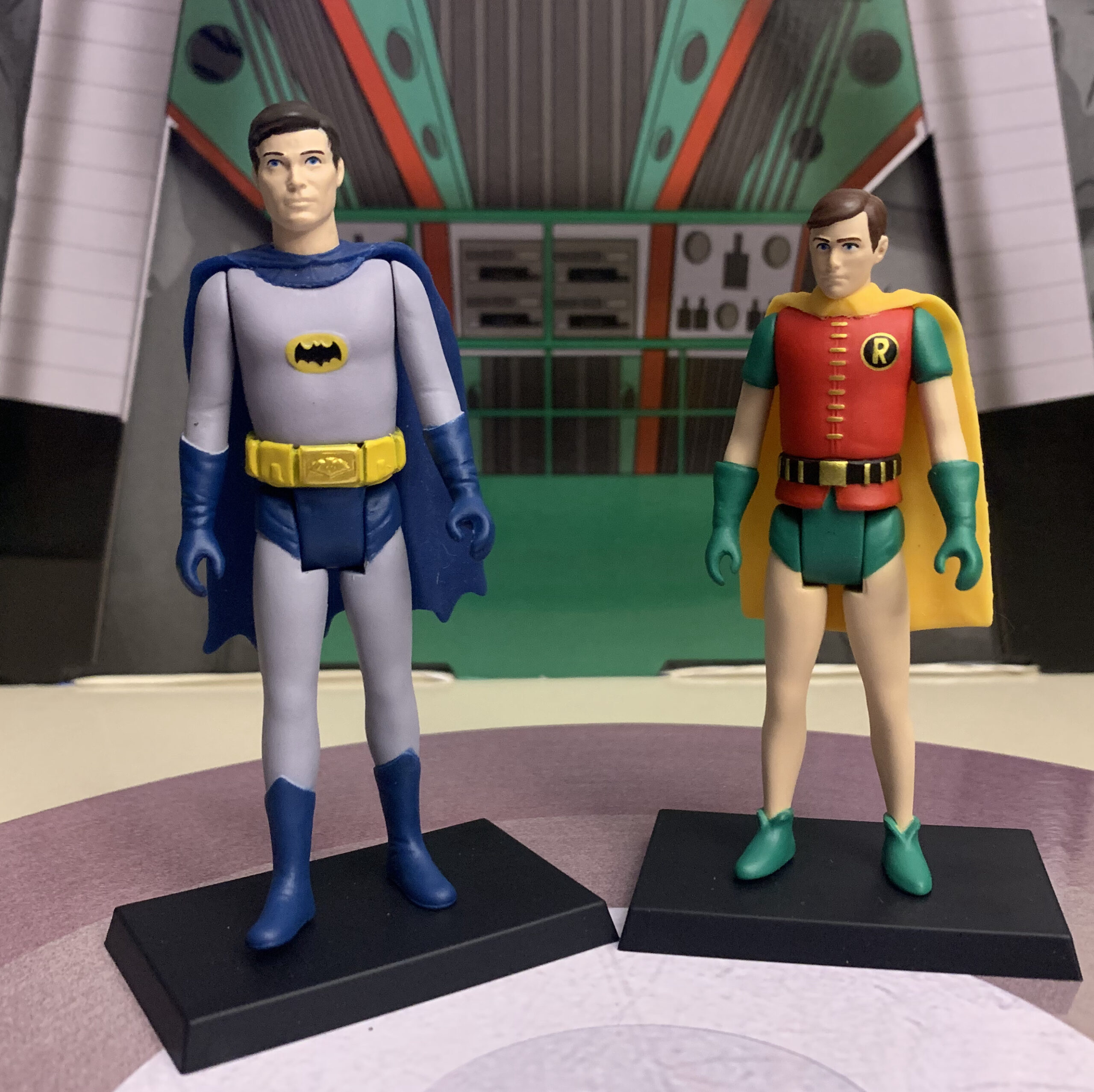 10. The accessories are really clever too. Batarangs are a natural but I always appreciate a good Bat-Shield. The can of shark repellent is a nice piece of kitsch. The Penguin’s umbrella is especially keen with the colored smoke attachment and I appreciate getting one of Catwoman’s statues from her debut ep. If only the Joker came with a monkey.

12. One of the absolute best parts of the entire set is the Batpoles. They actually come with little clips so you can re-enact Batman and Robin plunging into the Batcave. There’s also the other end — the Batcave exit, complete with warning gate and Gotham City 14 Miles sign. The cave “door” won’t close on its own. I wedged a small piece of cardboard near the bottom and — presto! — it shuts.

13. Fantasy time: Let’s say Mezco does decide to do a second wave. Nothing as extensive as this one, but just an assortment of figures. I’d argue for jumpsuit Riddler, Eartha Kitt Catwoman, Bruce, Dick, Batgirl and Barbara Gordon. Unfortunately, licensing issues prevent many of the other figs we’d want to see, like Commissioner Gordon, George Sanders Mr. Freeze and Lee Meriwether Catwoman. But hey, we Batman ’66 fans have been happily surprised many times over the last 8-10 years or so. Perhaps Bat-lightning will strike again.