The second of three parts — by our special guest columnist, Neal Adams!

Neal Adams turned 75 this week and we’ve prevailed upon him to pick his 13 favorite covers. Or at least 13 of his favorites.

In Part 1, he selects classics such as Detective Comics #404 and Action Comics #359. But make sure you click here to see his other choices. 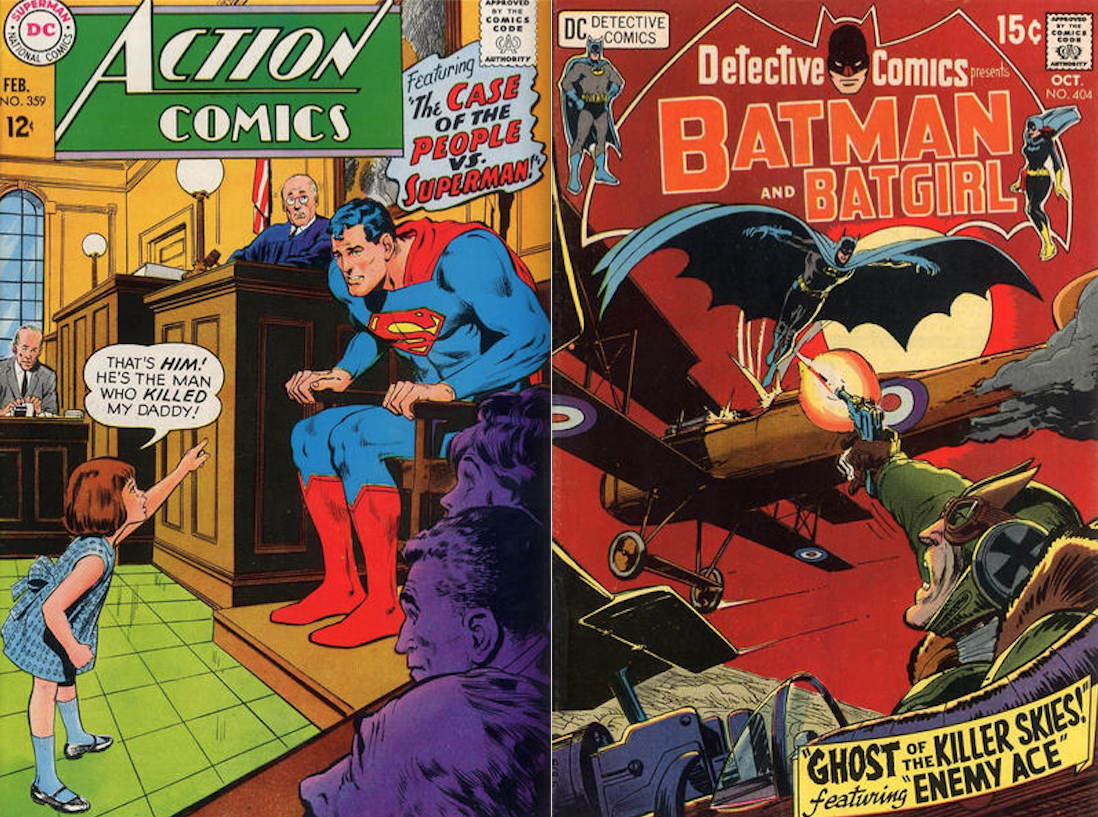 6. Switching to Superman, actually Action Comics #466. If you look at this cover, you could believe that unconsciously, Neal Adams is a bad father because it’s a picture of Luthor punching Superbaby in the back of the head. But we know it’s Superman/Baby and he’s not going to be hurt. Or maybe he will be, because of those green gloves Luthor has on. I just find it an interesting and funny picture that does not reflect in any way on my affections for my sons, Joel, Jason and Josh. I never want to punch them in the back of the head. Well, maybe Joel. People do like this cover and bring it to me many times to sign and they always comment on it. And I don’t blame them. 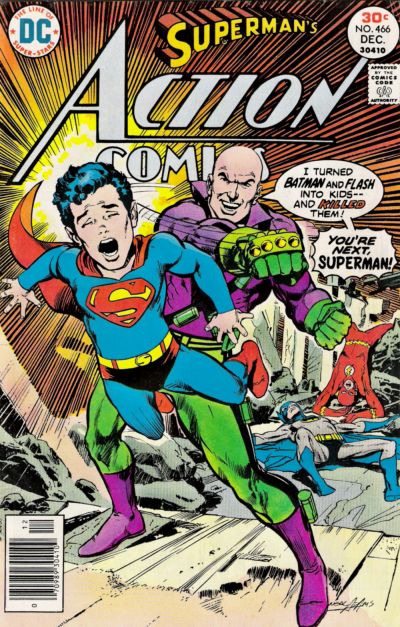 7. The House of Mystery #175. Joe Orlando wanted to do not-so-horrible horror comics up at DC during the time of the Comics Code. This may be because Joe began his career working with Wally Wood on horror stories for EC Comics, the comic company that was the focus for the congressional investigation and perhaps the lynchpin that drove comics downward in sales. Not to mention turn the American public against comics. It was the Comics Code Authority that forbade horror comics of any sort. So the question that Joe gave to me was how to do not-so-horror, horror comics. He had a cabinet full of stories that would never be published unless someone came up with a solution.

Over the weekend I mulled over the question and this was my solution: Use kids. Kids are frightened by things that would never frighten an adult. And their reactions, being children, are always exaggerated and emotional. So if we just simply gave slightly scary things to kids to react to, that would be far more interesting than having adults act so adult in the same situation. This was the first cover for that series of covers, and it worked. It did not fly in the face of the Comics Code. It was not horrible or gut-wrenchingly terrible. It was just a little scary. And that’s all Joe needed. From that point on, I did a series of covers for House of Secrets, House of Mystery, Witching Hour, and all of them were about little kids being scared. 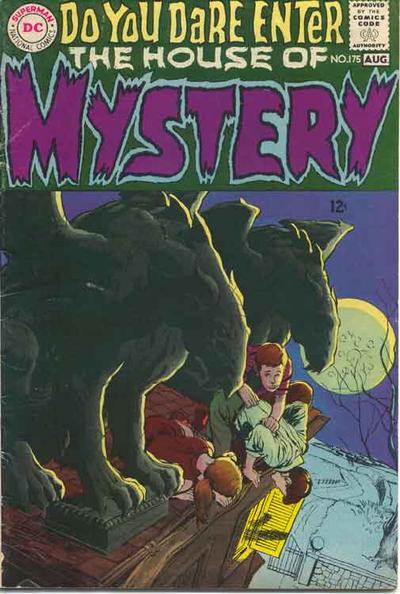 8. House of Mystery #254. Late in the game, in doing these covers with all the little kids being frightened by one thing or another, I came across a story in which a little boy’s father had been turned into an octopus. It’s not something you should laugh at, even though it’s kinda silly. But the problem was a very big problem. How do I get the idea across that the octopus in the aquarium tank was actually this little boy’s father? I did it with the eyes. Soulful, sad, unhappy, daddy eyes on the octopus in the tank. This is how Neal has fun solving really silly problems like this. Please look at the cover and tell me if there’s any way that you could not know that the octopus was that little boy’s dad. I call it a home run. 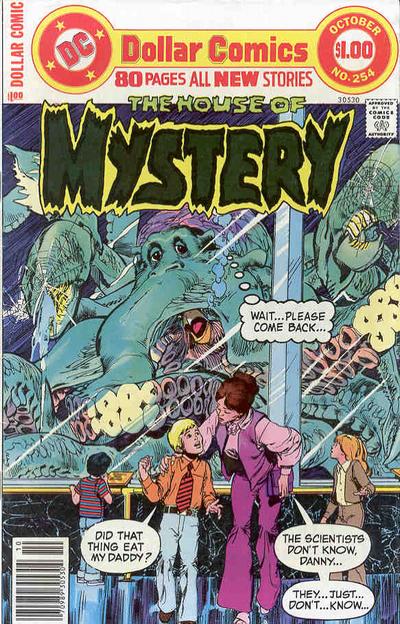 9. All-Star Batman and Robin #8, variant cover. I’ll tell you a story about this one. DC Comics and Warner Brothers wanted me to do a cover for a book that they had not completed, they did not have comic pages for, they did not have the story, or even an outline. Yet the book was being done by Frank Miller and Jim Lee. Talk about pressure. To add to the pressure, they told me that they were going to give this very, very special- covered book to the Warners executives at some kind of function to dazzle them with DC Comics.

I thought I’d like to do a cover that mixes Batman and Joker together into a kind of double image. 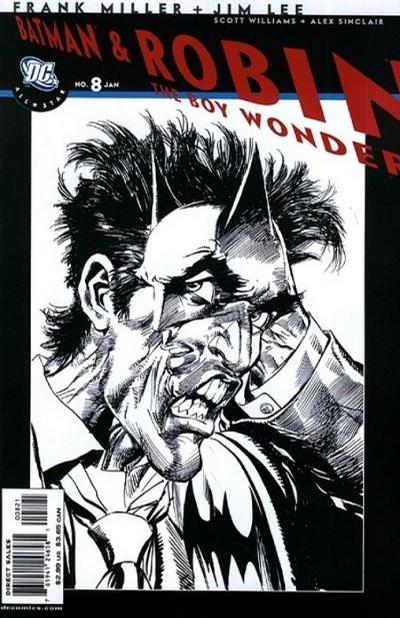 The black and white version.

I realized, of course, no one had ever successfully done this without contriving the picture. That is, if you wanted to do two images over each other, you’d have to do a part of one image that would become a part of the other image. You’d have to move a plant on a table or open a door or do something that would allow the second image to appear. The classic example of this is the woman at the vanity doing her make up and as you move your head, you realize the picture is a skull. If you look at it one way, it’s a woman at the dressing table, look at it another way and it’s a skull. To succeed at this, the artist had to contrive various things to appear in various parts of the composition. So my question was, “How do I do this without contriving the picture, so that people could figure they could guess how I did it?” I didn’t want them to guess.

So I created a new art form. Here, I’ll share it with you. It’s called “Elephants in clouds.”

The thing is that both of you can see the rabbit or the elephant because it’s sort of there. Of course you have to add your imagination to that, but you can still see it. 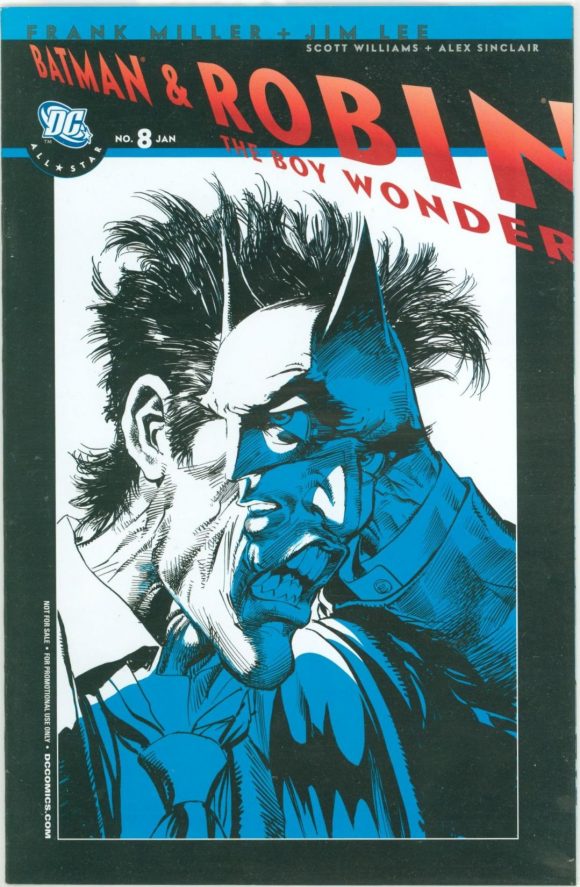 So the idea is that it’s a picture made of random shapes and your imagination.

You do this when you’re a kid when you see shadows on the wall and they become monsters. They even seem to move, and they scare the bejeezus out of you.

So how could I find a picture of Batman and Joker if I didn’t know what I was looking for. I have a conference room. I put sheets of paper on the table. I have a dozen lights in the ceiling. If I stand a glass on the table, it makes a dozen shadows. I got a ketchup bottle and mustard bottle and glasses with pencils, making all these shadows on the table. These were my clouds.

Then I started moving things around and the shadows changed and I watched the shadows looking for a picture, looking for an elephant…or a Batman and Joker. Six minutes later, I found that picture. It was indistinct, but I could see it. So I took my pencil and I started to draw over the shadows until I could get as much of the picture I could. Then I took the ketchup and glasses away until I got what you see on that cover to something that is not contrived. It’s something I didn’t draw at all. I found it in the shadows on the table.

NEXT, in PART 3: More classic Batman — and Three Cows Shot Me Down! Click here.