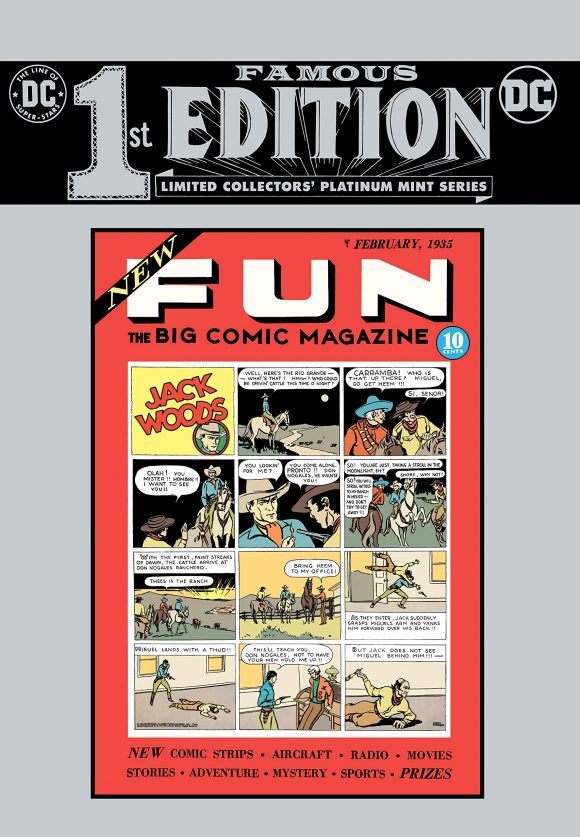 Naturally, this compelled me to call upon the treasury expert of treasury experts Rob Kelly to summon a list of 13 more comics deserving such an august presentation. (In fact, Rob reviews the New Fun edition on the latest episode of the podcast TreasuryCast. Click here.)

So here are 13 NEW FAMOUS FIRST EDITION TREASURIES WE WANT TO SEE:

To celebrate its 85th anniversary, DC has revived the classic Famous First Edition series of treasury-sized comics to reprint New Fun Comics #1, the first-ever issue of all-new material — from the publisher that would eventually become DC Comics.

A truly handsome book, it appears DC spared no expense to commemorate their humble (yet ambitious) beginnings as a company. As someone who owns every single Famous First Edition from the 1970s, this was a welcome addition to that series’ storied, if brief, history.

To that end, we thought, why stop there? Now that DC has decades of additional historic releases under its belt, why not keep the Famous Firsts going and give some other books the deluxe treatment? Sure, comics of previous decades are a lot more accessible now than they were in the 1970s, but I still maintain that there is a lot of value — in every sense of the word — to issuing keepsake editions of comics that truly left a mark on the medium. So, to that end, here are 13 NEW FAMOUS FIRST EDITION TREASURIES WE WANT TO SEE: 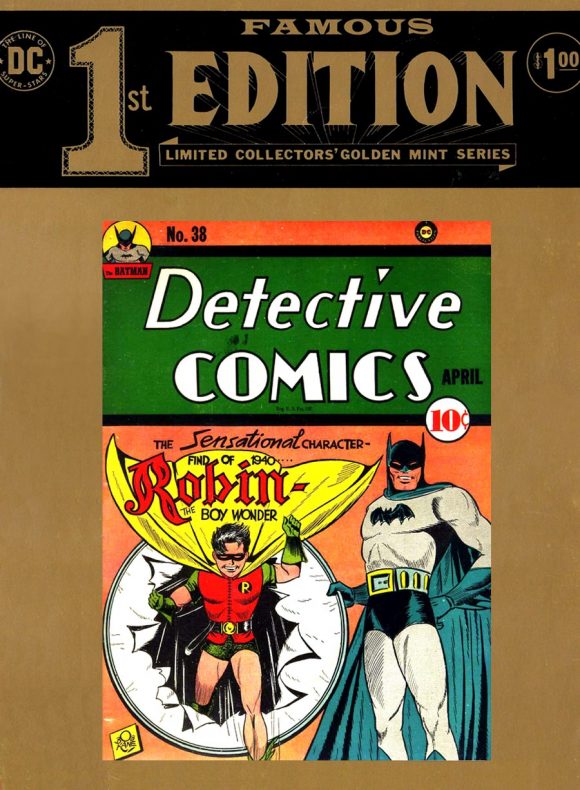 During the heyday of Famous First Edition, a lot of DC’s biggest icons — Superman, Batman, Wonder Woman, The Flash — got their initial appearances enshrined in treasury-sized glory. But a few other characters just as deserving got left behind. One of them, of course, is Robin the Boy Wonder, whose 1940 debut belongs alongside the other legends of the DCU. 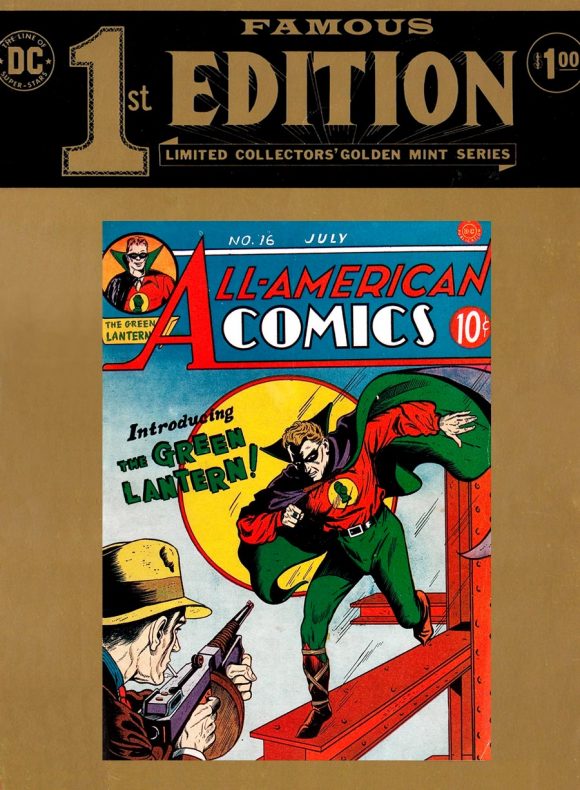 Green Lantern was another hero who missed the first cut, so let’s put his 1940 first appearance in gold (not wood). 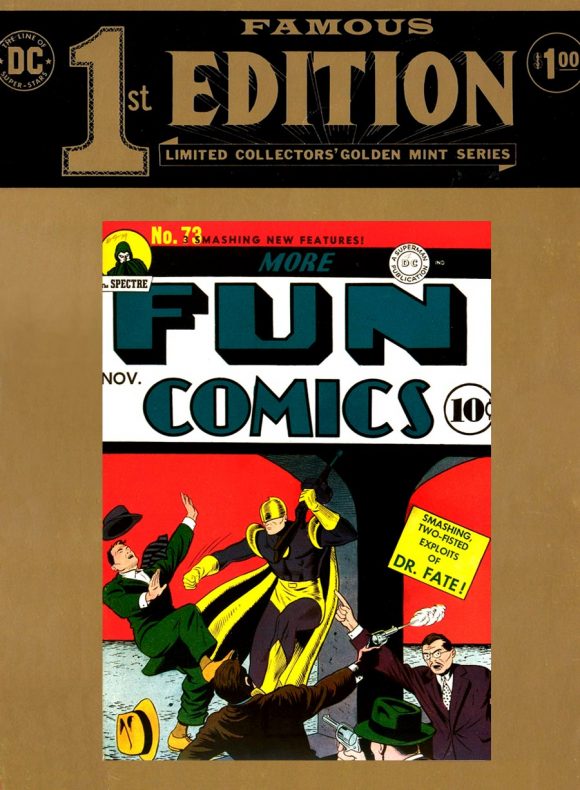 DC gets a two-fer with this comic, since (contra the cover) it features the 1941 debut of two more legendary icons — Aquaman and Green Arrow. 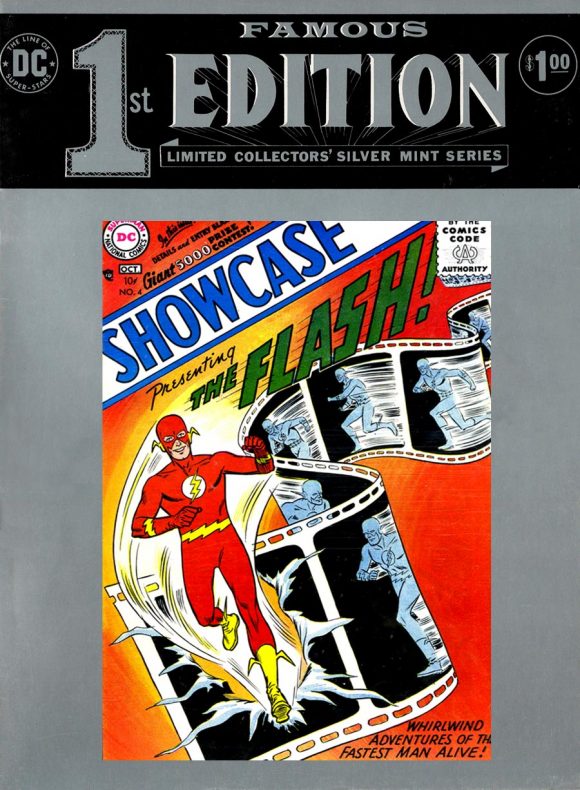 The second Flash’s debut in 1956’s Showcase #4 kicked off what became known as the Silver Age of Comics and it belongs on any list of important milestones, DC or otherwise. 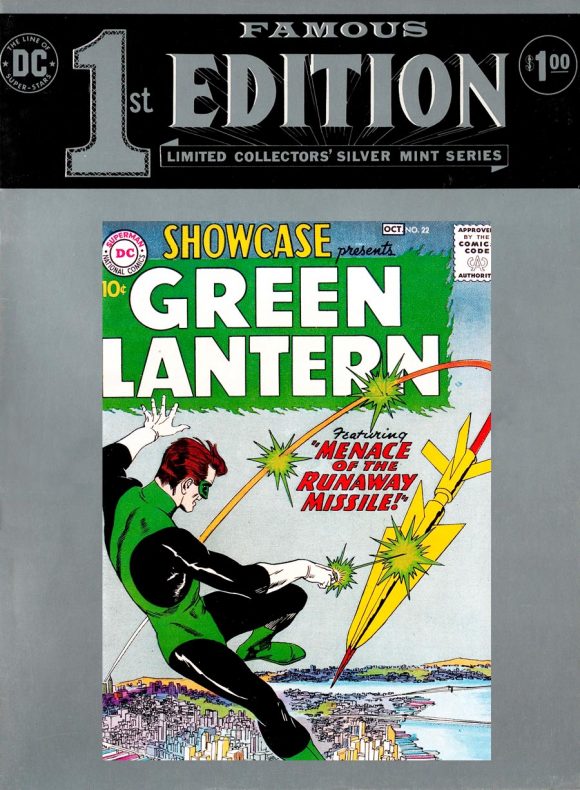 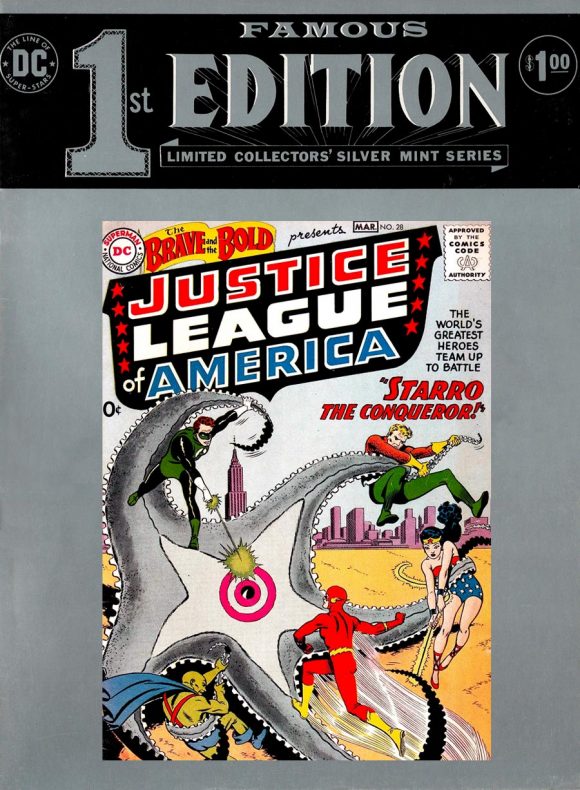 If the Justice Society’s intro in All-Star Comics #3 was deemed worthy of a Famous First Edition, surely the now even-more-famous Justice League’s first adventure — published at the end of 1959 — should get the same honor? The Legion of Super-Heroes went from fun, quirky background characters in Superboy comics to becoming one of the cornerstones of the DCU, and this 1958 issue is where it all started. 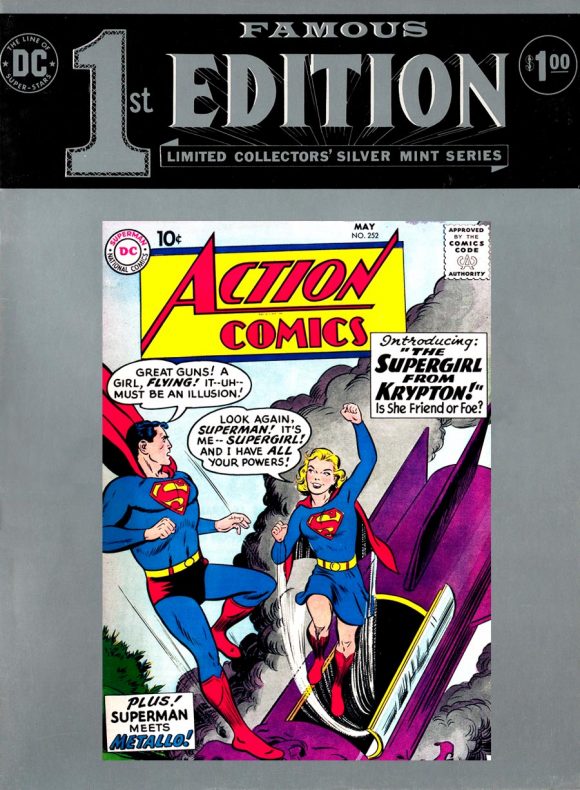 TV sensation Supergirl’s first appearance in the pages of 1959’s Action Comics #252 is the perfect subject for a Famous First Edition, a format worthy of the Maid of Might. 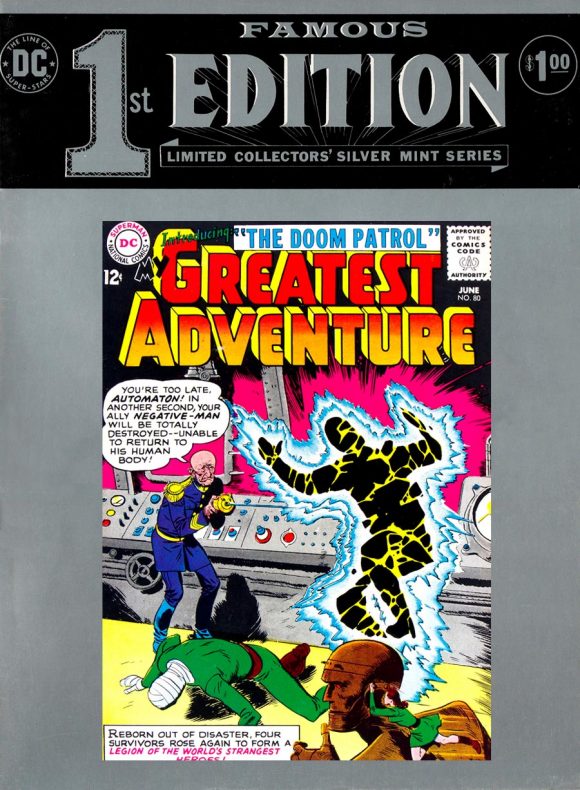 OK, some of you might go huh? with this choice from 1963. But not only has the Doom Patrol gone on to become one of DC’s most enduring franchises, they’ve got their own TV show for Rao’s sake! 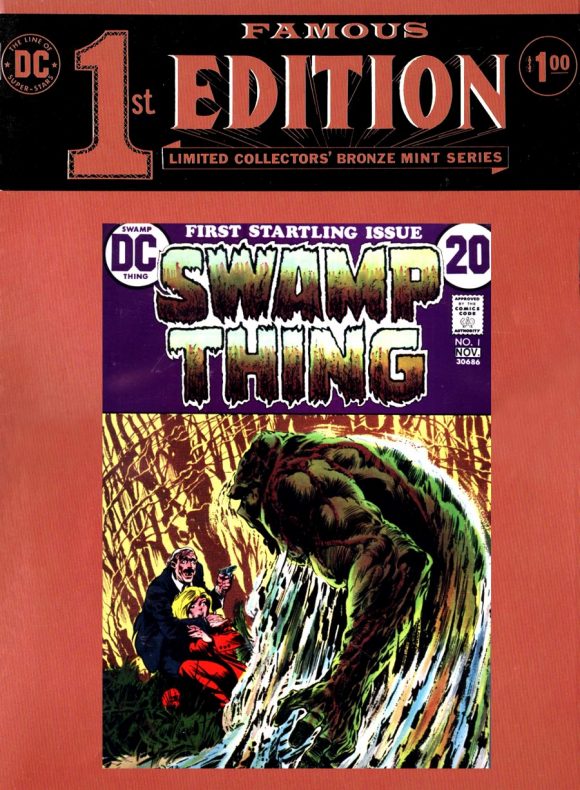 Speaking of TV shows, Len Wein and Bernie Wrightson’s muck monster has conquered pretty much every medium there is to conquer — comics, movies, TV, animation and toys. For some reason, even though DC loved to reprint 1972’s Swamp Thing #1 for virtually any reason in the 1970s, they never went ahead and gave him his own treasury. Let’s fix that. If any comic artist ever deserved their work to be seen as big as possible, it’s Wrightson. (You could consider House of Secrets #92, but that featured more of a proto version of the character.) 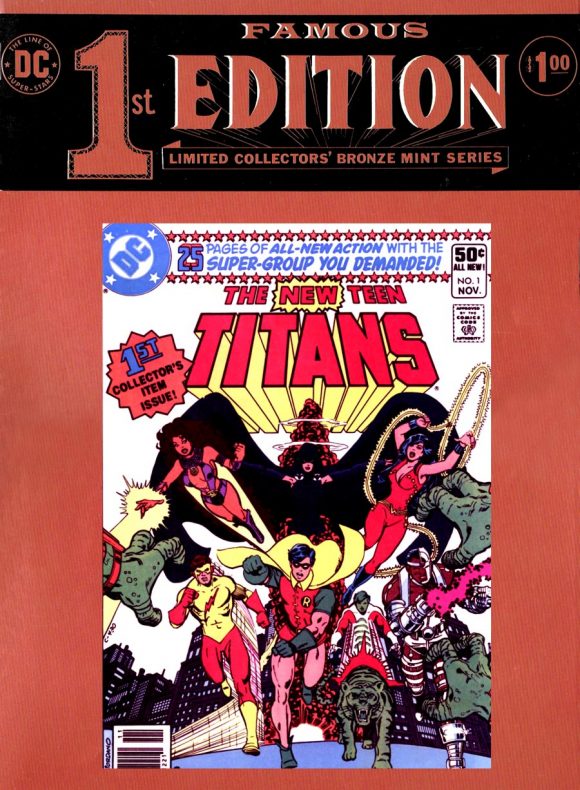 DC turned a corner creatively with this comic, with Marv Wolfman and George Perez bringing an intimacy and immediacy to superhero comics that had mostly been the House of Ideas’ stock and trade. Like the Doom Patrol and Swamp Thing, the Teen Titans have become a major part of DC Comics’ legacy. And while the concept didn’t debut here, it was this 1980 version that kicked it into overdrive. 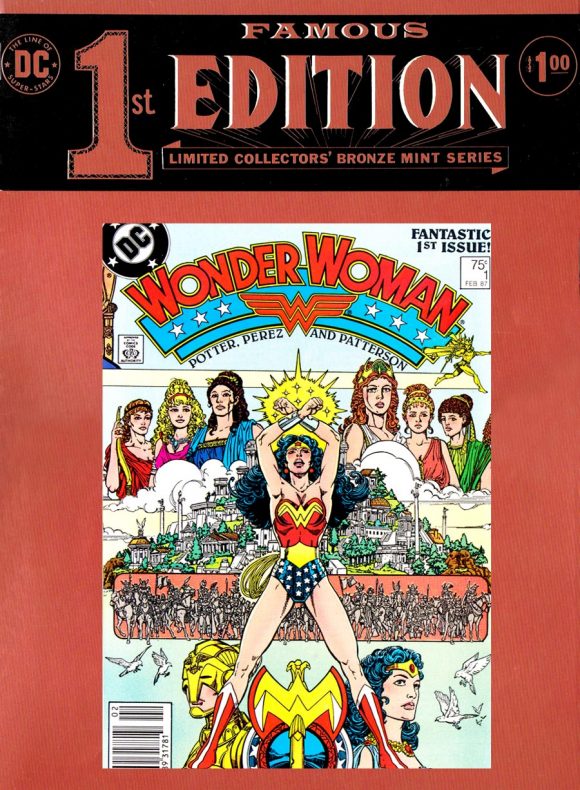 Like with The New Teen Titans above (and hey, it’s that Perez guy again), the rebooted Wonder Woman started here. Doing a Famous First Edition of this 1987 landmark comic would be a perfect companion piece to the new Wonder Woman movie, whenever and wherever it ends up coming out. 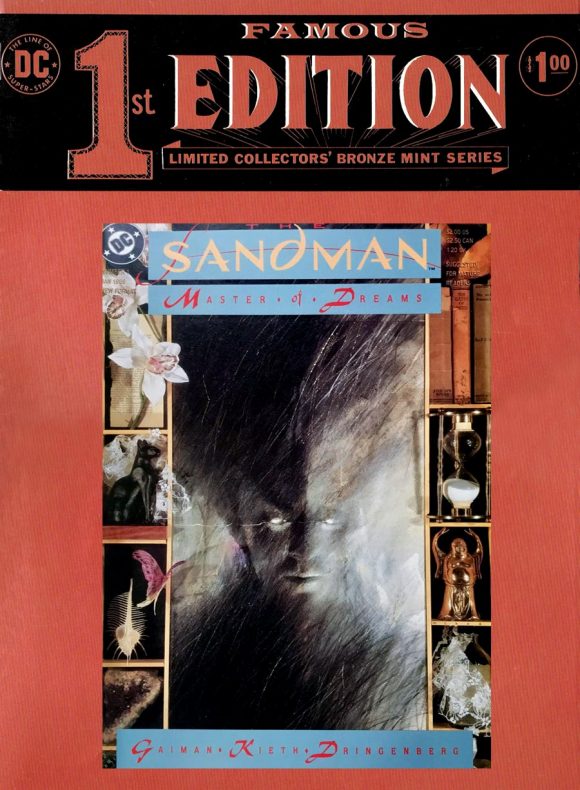 Sure, Neil Gaiman’s Sandman series has been reprinted in multiple formats, so it’s not a hard comic to find. But if DC uses the Famous First Edition brand to celebrate its history, then this late 1988 comic belongs on the list. I don’t need to tell you why. Just imagine seeing this book at a bigger-than-life size. It’s what dreams are made of.

So that’s my list. As I said above, DC really pulled out all the stops for their New Fun Comics #1 rerelease, even though it was bound to appeal to a very limited audience. Any of the books listed above have more commercial sizzle than that, and it would be truly, uh, marvelous to see them on a bookshelf alongside Action Comics #1, Batman #1, Wonder Woman #1, and the rest of the Famous First Editions. Let’s make it happen, DC!