TOYHEM puts the pieces together for you…

Why? Google can tell you all the health benefits—both physical and mental—and while that’s great for an aging fanboy like myself, a bigger piece of the puzzle for me is the sheer nostalgic comfort it provides. Building jigsaw puzzles was a time-honored pastime for my family when I was a kid, and whether we built a huge landscape scene on the dining room table over many months as a team or I put together one of my smaller pop culture favorites in a day or so by myself, it was as normal as normal could be back then. 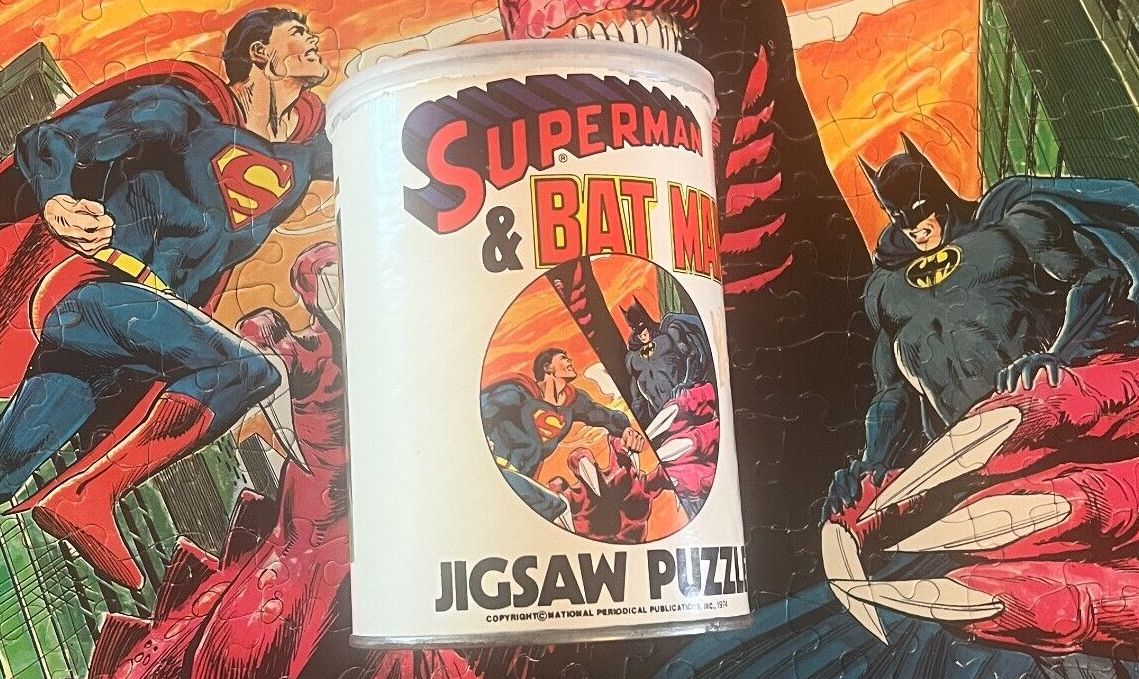 Today, while puzzles took center stage somewhat during pandemic lockdowns, the sublime and soothing pleasure of building them is something that’s just not on most people’s radar anymore. And that’s a shame, because like I said, the benefits are simply incredible… to you body and your soul.

I picked out 13 images of jigsaw puzzles from the ’60s and ’70s, the “golden age” of the toy so far as I’m concerned. Some of them are ones I had — and still have — while others should give you a good idea of the glory I’m talking about. I’m hoping some of these are ones you had, too, and enjoyed.

And while we’re at it, why not sit down and start a puzzle today?

Star Wars “X-Wing Fighters Prepare to Attack.” Back in 1977, Kenner’s Star Wars jigsaw puzzles were in every home, and while the images were usually kind of fuzzy compared to the crystal clarity we expect today in products, the variety was pretty darn exciting. This is one of my favorites, and one I still have from my childhood. 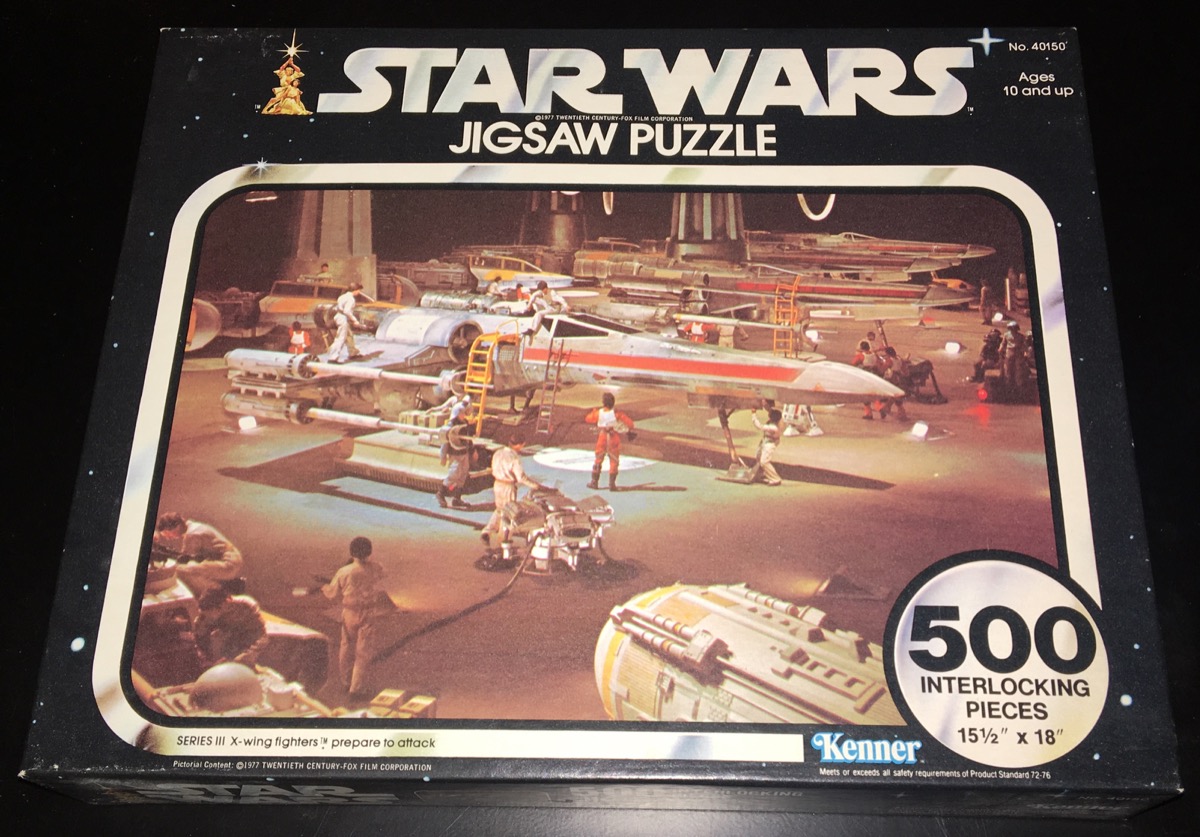 The Munsters. Had this Whitman puzzle back in the day, too, but it’s long gone. I totally dug this 1965 family scene around the cauldron, but was Marilyn ever that sultry and slinky on the show? 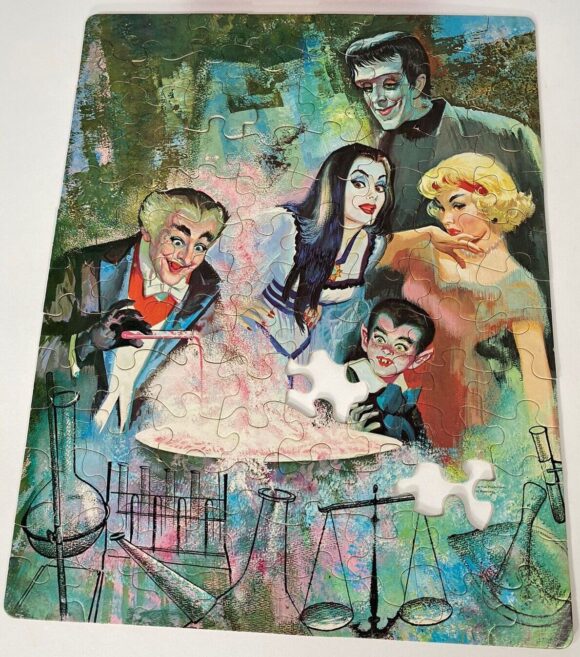 Disneyland. Whitman probably had the best puzzles, and this 1969 Disneyland entry is still a favorite of mine today. I love maps, always have, and while you probably couldn’t really use this fanciful image to find your way around the park, it stirred the imagination of a young kid stuck in Ohio who desperately wanted to visit the Happiest Place on Earth. 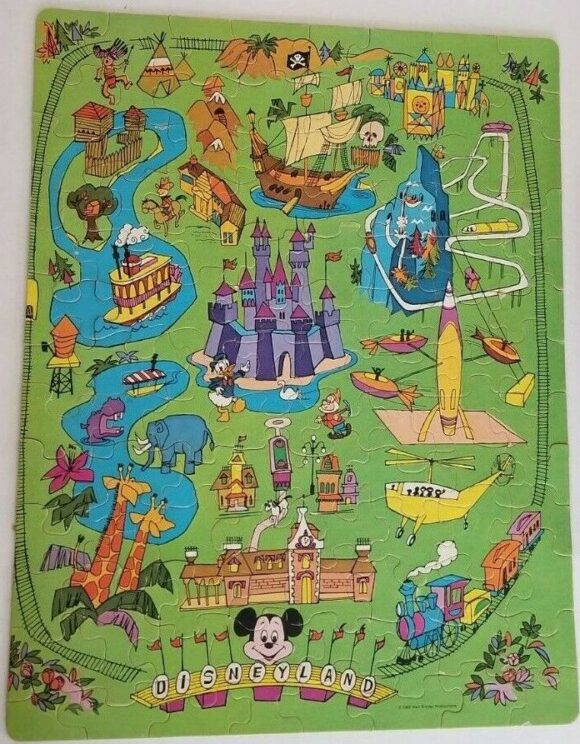 Superman and Batman. The APC people put out a lot of these canned puzzles in the early to mid-’70s, and I owned just about all of them. I’m not sure if this 1974 image of the World’s Finest team fighting a dragon (well, Superman is fighting a dragon) is original to the puzzle or cribbed from something else, but I always thought it was pretty snazzy and exciting. 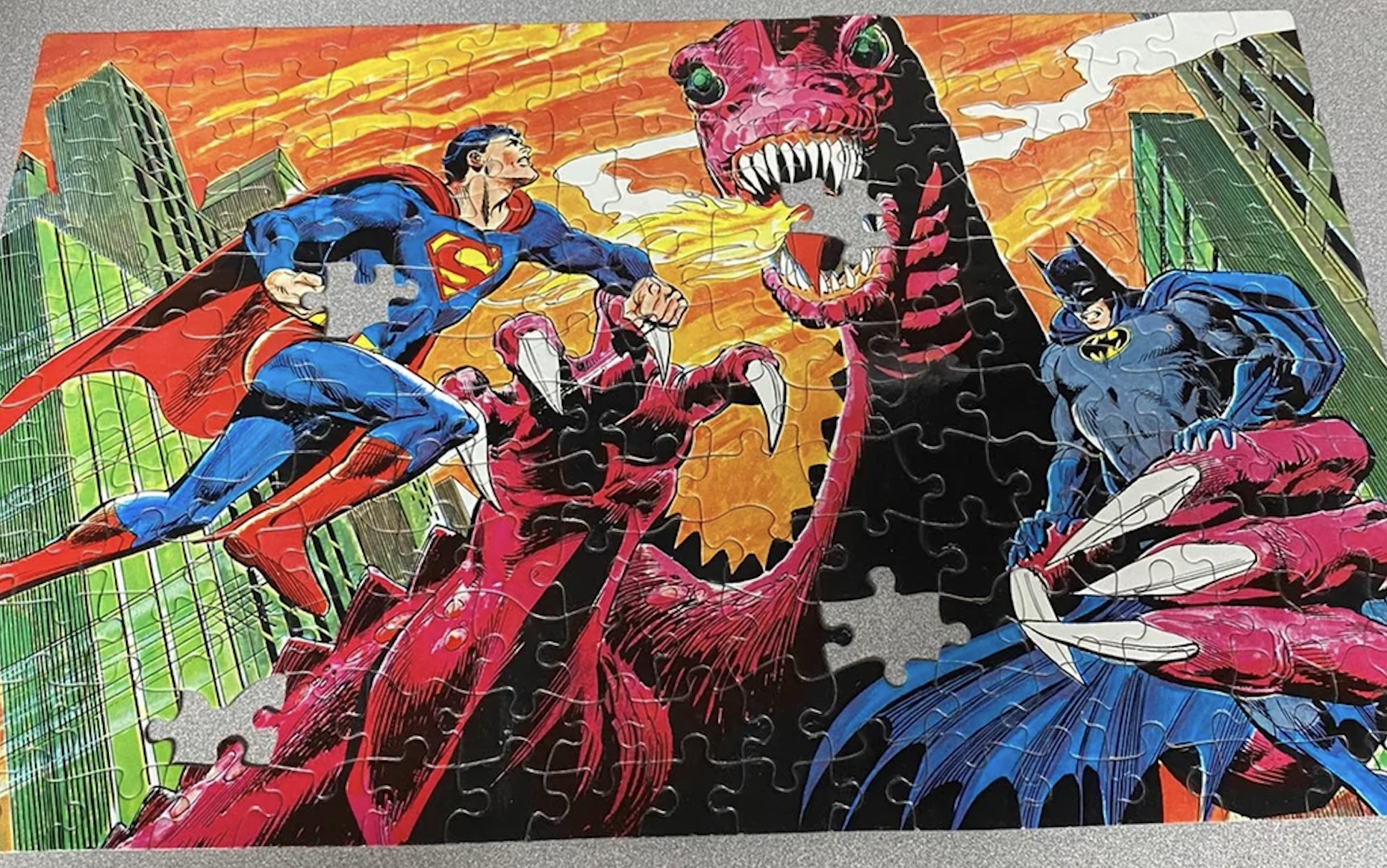 Space: 1999. H.G. Toys did this one in the ’70s, an oddball image for an oddball SF show. I was pretty sure nothing like this scene ever happened in an actual episode, but it’s kind of unique and cool, isn’t it? 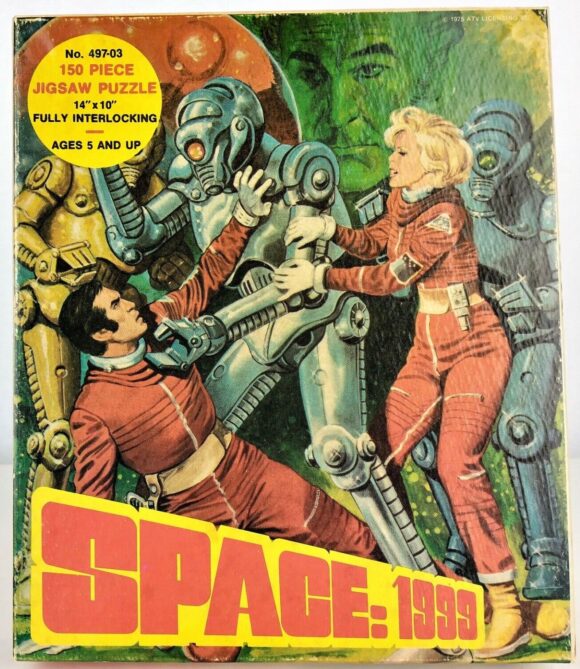 G.I Joe – Action Sailor. Hasbro and Whitman teamed up in 1965 to augment the action figure line with a set of jigsaw puzzles, one each for the four branches of the service. I think this naval battle scene is the most striking of them. Now, why didn’t they ever have Adventure Team puzzles, huh? 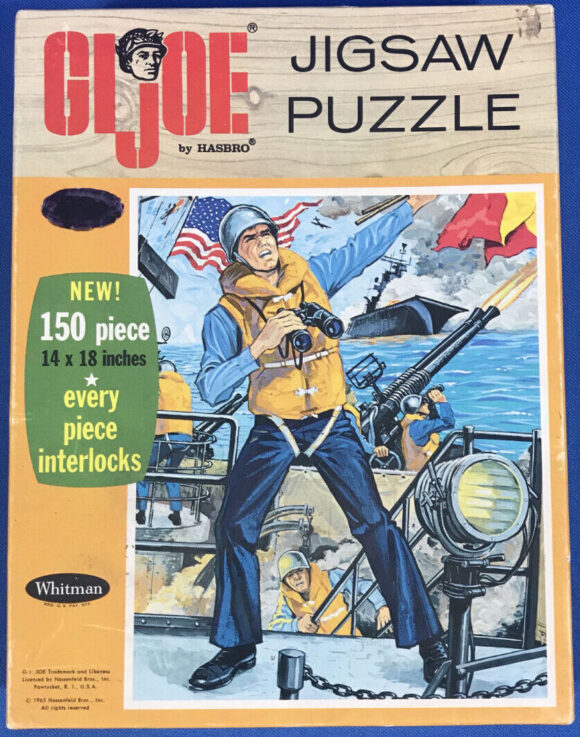 Dinosaurs. Every kid ever loved dinosaurs, so why wouldn’t a kid love a dinosaur jigsaw puzzle? There have been a virtual ton of dino sets over the decades, but I chose this 1975 Rainbow Works Tyrannosaurus Rex one because of the nice vintage feel to it. 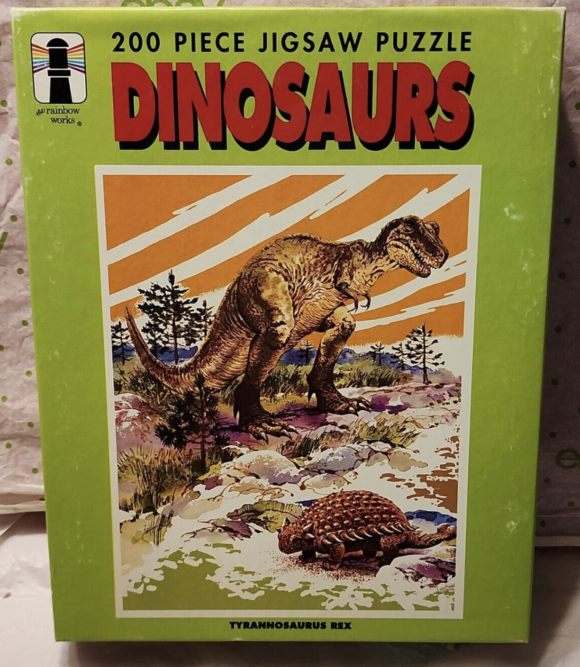 James Bond: Thunderball — “Bond’s Battle.” My dad bought this Milton Bradley puzzle back in 1965, and I still have it today. It’s missing a couple pieces, but I still build it now and then because the artwork is gorgeous and, hey, it’s James Bond. 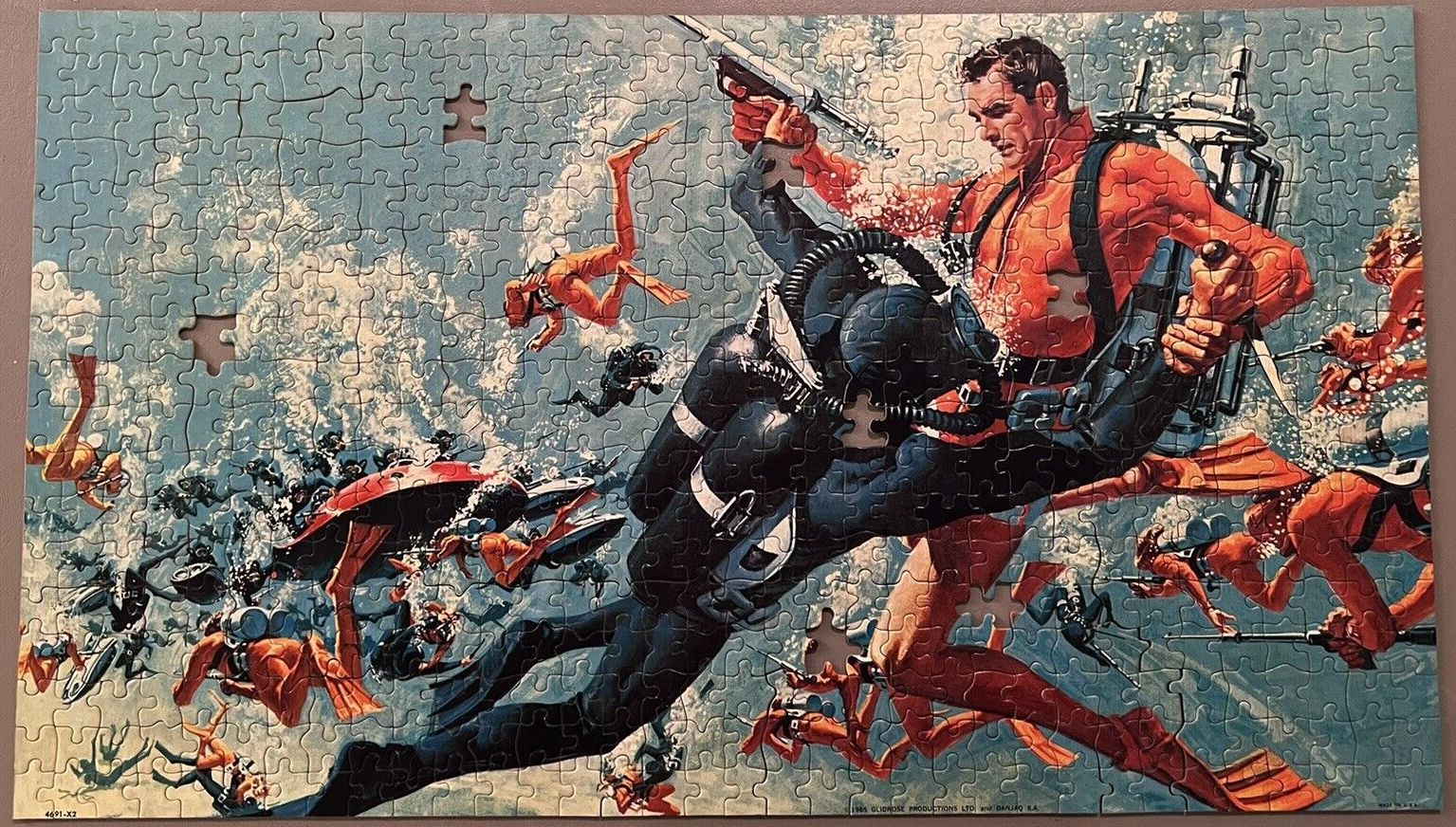 Star Trek. Merrigold Press did these goofy little frame-tray puzzles at the time of Star Trek: The Motion Picture in 1979, but for some reason used graphics from the ’60s TV series. There’s just something about this one, with Kirk stepping lightly over the clouds as he and Spock hang out in… space? The art reminds me of Alberto Giolitti’s from the Gold Key Trek comic books. 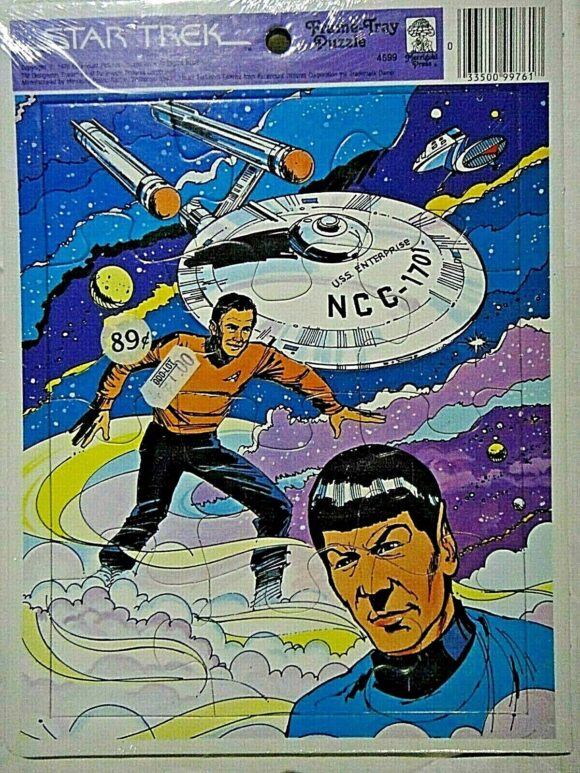 Doc Savage. As near as I can determine, Whitman only did one puzzle from the 1975 George Pal Doc Savage feature film, and if you ask some people, that’s probably for the best. Still, it’s a unique collectible for Doc fans who need to have everything. 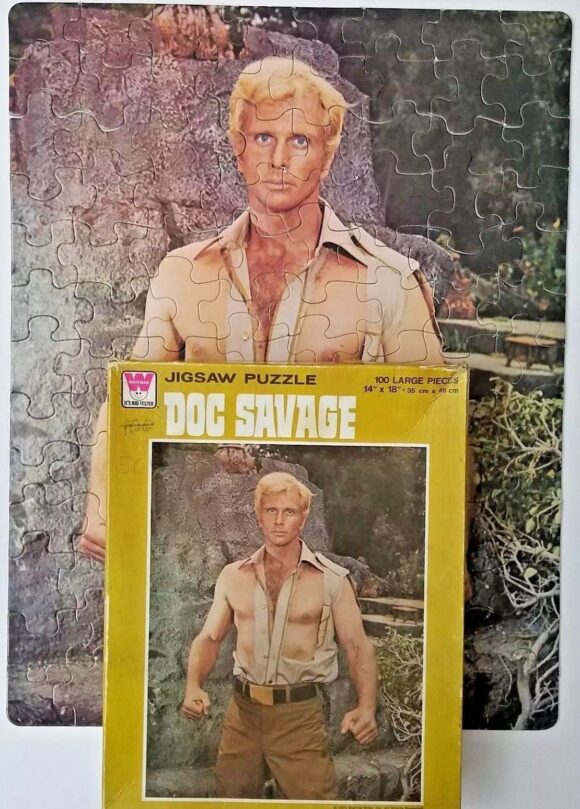 Wolf Man. The art is crude, but back in the day would any Monster Kid worth his fangs care? This Jaymar Universal Monsters puzzle has both the Wolf Man and the Frankenstein Monster haunting it! Not to mention, of course, the somewhat generic corpse rising from its grave, but who’s counting? Batman. Ahh, we’re getting down to my most favorite childhood jigsaw puzzles of all. This 1966 Whitman Batman image is so typical of all the tie-in merchandise pushed out that year to feed Batmania. It’s got that not-quite-from-the-comic-book style I just love, with the extra added bonus of the Penguin and Robin. 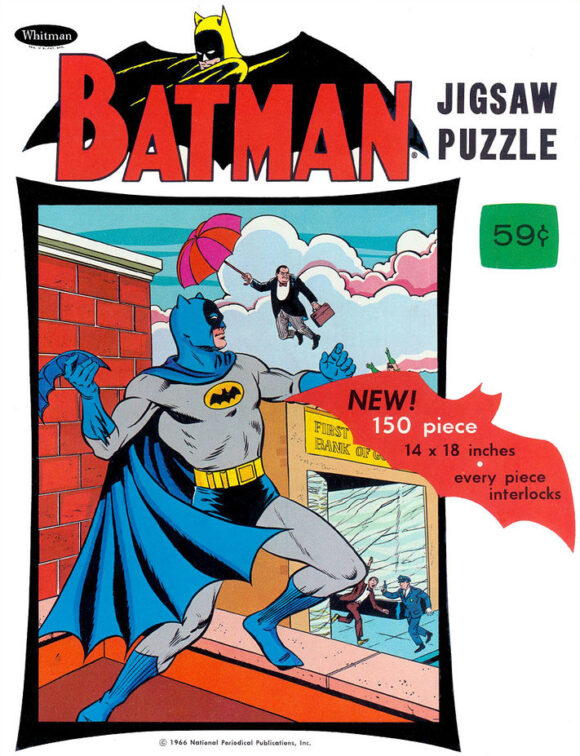 Major Matt Mason. I end with the jigsaw puzzle of my entire life, the one I love the most, baby. This Whitman Junior Guild set is only 125 pieces, but it’s big and bold and round, and features accurate MMM figures fighting off totally-made-up-for-this-puzzle alien invaders with a toy-accurate Firebolt Space Cannon. Feast your eyes on all its 1969 glory. 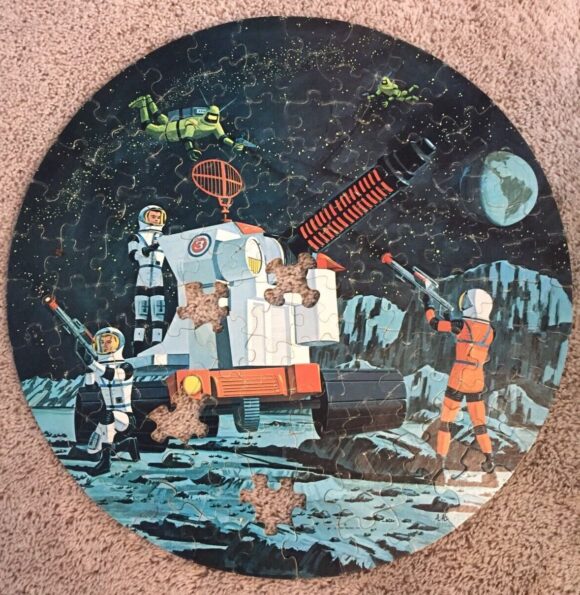