One of the greatest comics of the Bronze Age…

One of the grooviest podcasts around these days is Batman Family Reunion hosted by Paul Kien and Shawn M. Myers, part of the Fire and Water Podcast Network. It’s an exploration of DC’s Batman Family, which pound for pound was the most consistently entertaining Batbook of the ’70s.

Well, Paul and Shawn, fresh off an interview with Bob Rozakis, the mag’s creative force, are up to 1976’s Batman Family #9, one of the series’ highest points and one of my personal fave comics of all time. 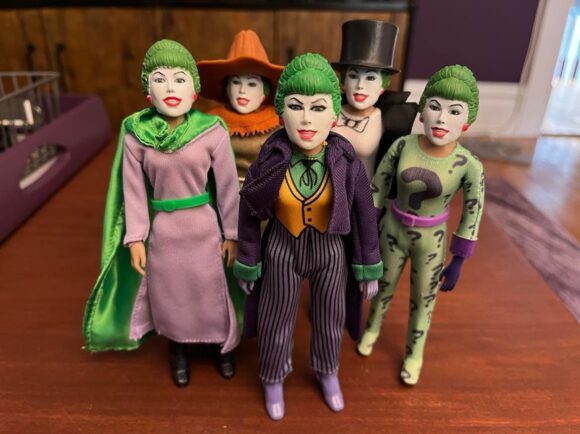 The Joker’s Daughter and the her alter egos…

Paul and Shawn were especially gracious and allowed me to come on their new episode to wax rhapsodic about the climax of the Joker’s Daughter Saga and the rest of the nifty stuff in this 50-cent goldmine.

Click here to check out the ep. I think you’ll dig it. And to get you prepped, Paul and Shawn have put together 13 GROOVY THINGS TO LOVE ABOUT BATMAN FAMILY #9.

13. Awesome Cover by Ernie Chan! Ernie Chan (Chua) was DC’s primary cover artist from 1975-1977 and this issue’s Batgirl vs. Joker’s Daughter struggle doesn’t disappoint!  Listen in this month, as we also shed some light on Chan’s professional career. 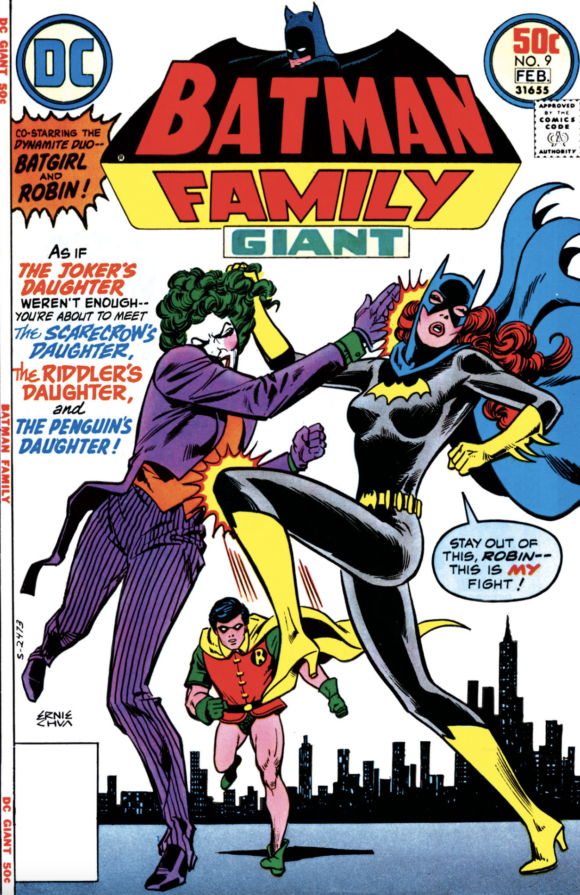 12. Three Stories for 50 Cents! Bronze Age Giants are the best, and in this issue we have the new Batgirl/Robin story “The Startling Secret of the Devilish Daughters” where we learn the Secret Origin of the Joker’s Daughter! But we also get a Golden Age Alfred adventure and the Silver Age return of the Blockbuster (and a hint of what is to come with… the Outsider)! 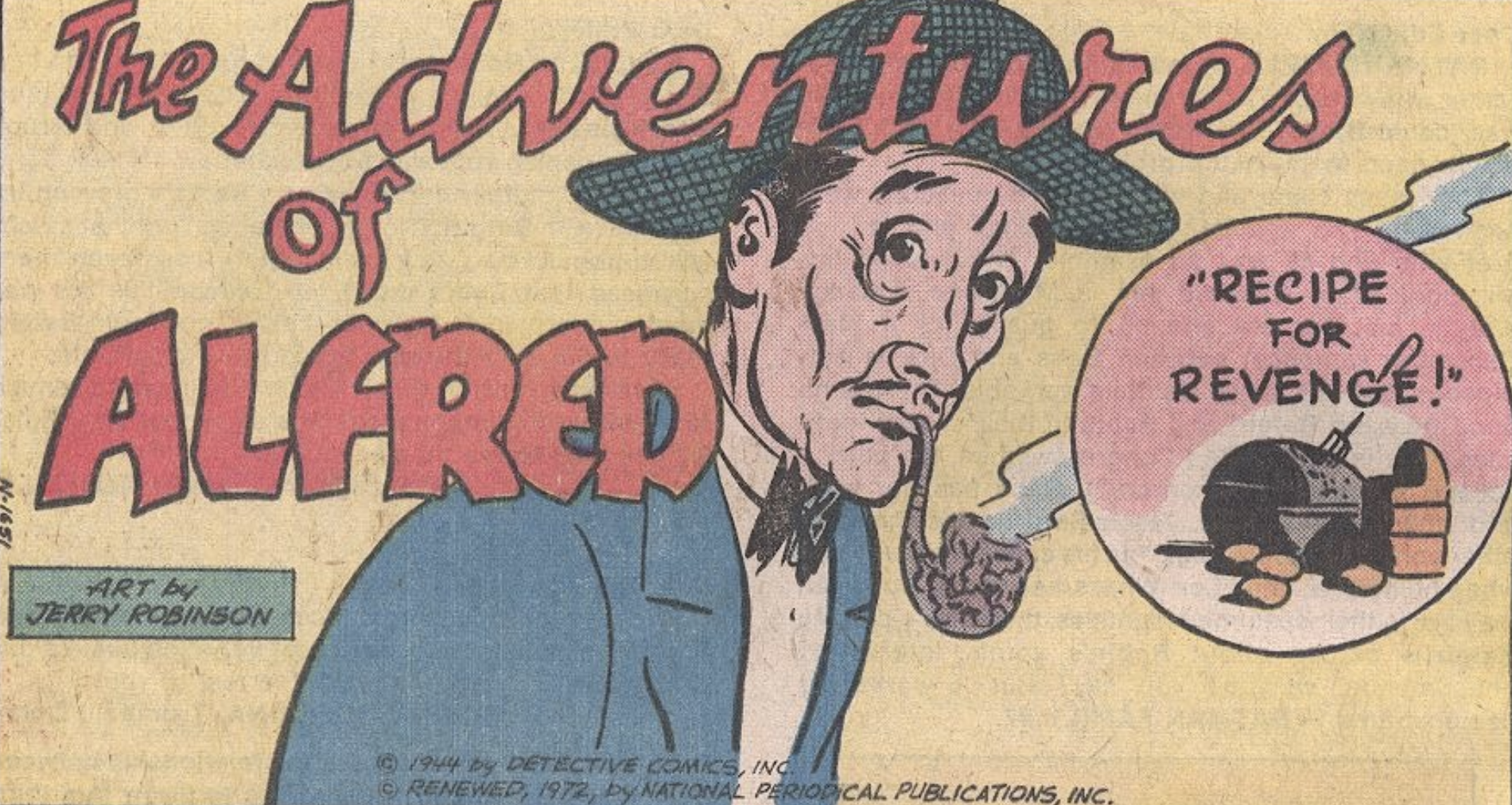 11. The Ads! C’mon, kids!  Pick up a DC suspense book like Ghosts, or House of Mystery! Whoa – the Challengers of the Unknown in Super-Team Family?! Get your copy of Rudolph’s treasury comic before Christmas! Ride into adventure with Evel Knievel!  And of course, Green Lantern and the Fruit Pie Scene! 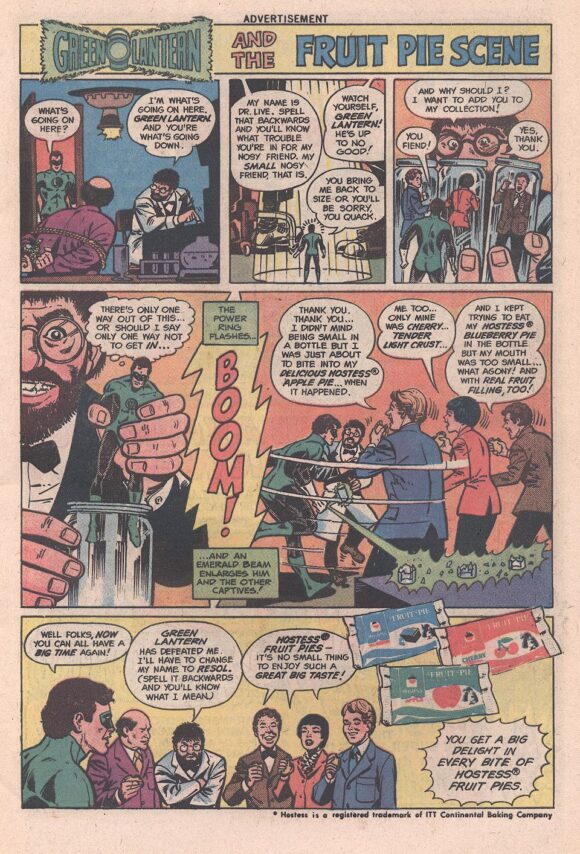 10. The Dynamite Duo! Batgirl and Robin were always secondary characters, but Batman Family gave them a chance to shine in leading roles. They made a great crimefighting team, always in synch (especially here against the Penguin’s Daughter)!

9. Gadget Weapons! The Bronze Age was full of great villains adhering to their theme — but in this issue the Devilish Daughters go all out with Fear Perfume, Riddler Revolvers, and more! 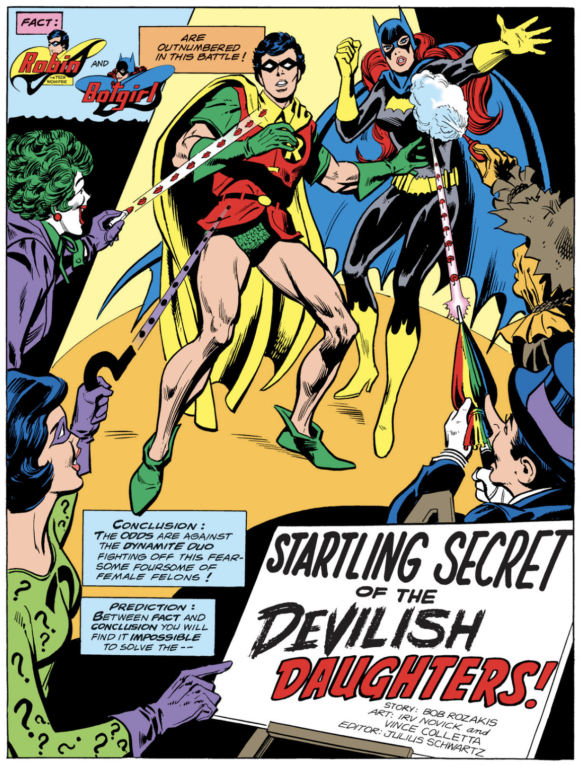 8. Irv Novick! Whether it is action scenes or quiet moments on the Hudson University campus, Irv Novick was a consummate professional and an iconic Batman artist of the Bronze Age!  He doesn’t get the press of some other artists, but check out this fight scene between Batgirl and Scarecrone! 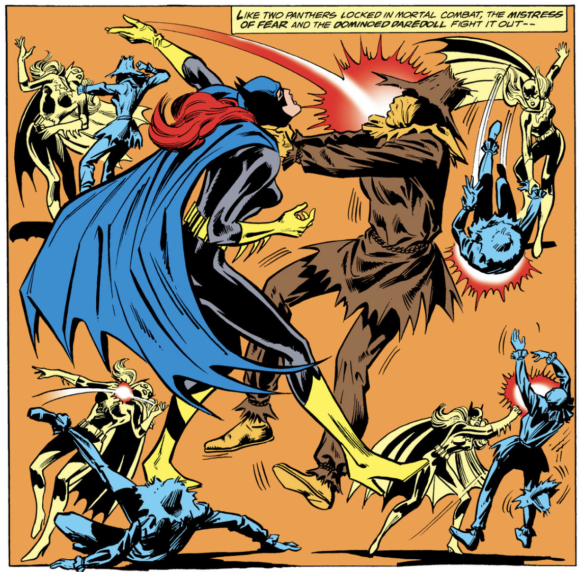 7. Lori Elton Tells Babs to Back Off! Although described in a previous text piece as Dick Grayson’s “current” girlfriend, Lori Elton was a mainstay of Robin’s Hudson University years. In this issue, she makes it clear that Congresswoman Gordon should keep her hands off her man!

6. Full Face Masks! Mission: Impossible, anyone?  The Joker’s Daughter has not one, not two, but three full face mask reveals this issue – all with her Joker makeup underneath! 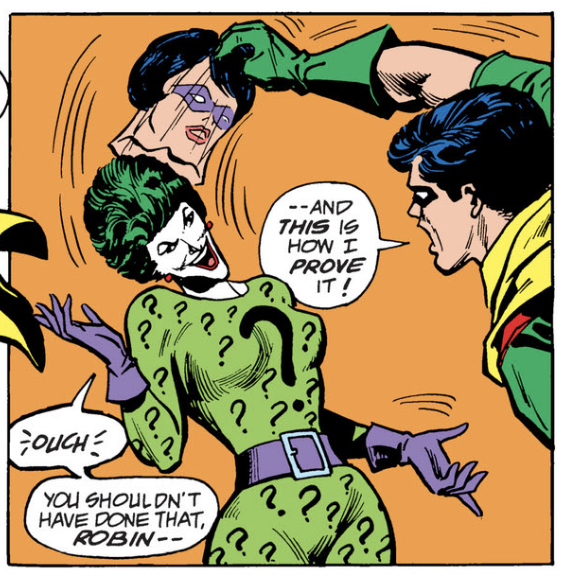 5. Batmail Family! Letters pages of the 1970s were where readers could sound off, and in Batmail Family, we were often treated to letter-writers making their case for or against a Batgirl/Robin romance!  In this issue, we even get a rebuttal from Lori Elton herself!

4. A Domino Mask Made of Paper Towels! Yes, you read that right! After Riddler’s Daughter gasses him, Robin takes refuge in the men’s room, only to find she has stolen his mask!  No problem, as the Teen Wonder constructs one on the spot!

3. Congresswoman Babs Gordon and College Student Dick Grayson. Whether it was the Congresswoman’s stylish outfits (often green to go with her auburn hair) or Dick’s groovy van, the 1970s versions of our heroes were adventuresome, action-oriented, and of course, flirty!

2. Secret Identities! They may be cute today, but guarding one’s secret ID was paramount in the Bronze Age! It was a big deal that Babs and Dick figured each other’s identities out back in Issue #3. Duela Dent went to a lot of trouble to find out Dick’s – and in this issue we learn why! 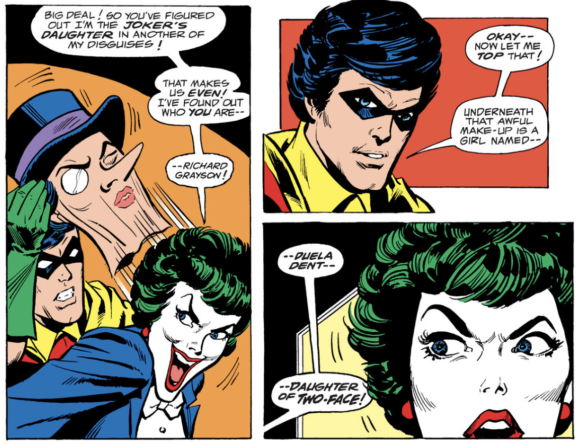 1. Bob Rozakis. The conclusion of the Joker’s Daughter Saga was just the first step for Bob Rozakis! The return of the Outsider, Teen Titans, and the birth of the Answer Man were all yet to come! His stories have entertained us for decades! 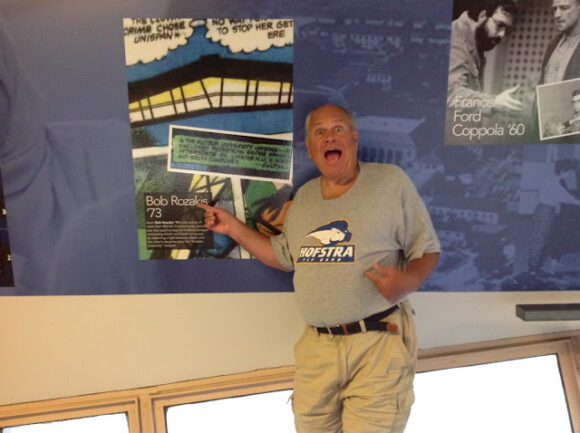 Proud Hofstra alum Rozakis included the campus’ signature Unispan in a battle between Robin and the Joker’s Daughter.

Batman Family Reunion is available wherever fine podcasts can be found. Click here to have a listen — and let us know what you think!