Glenn Head, whose Chicago is out from Fantagraphics, pays homage to the master of underground comix.

UPDATED 8/30/19: Robert Crumb is turning 76 and we re-present this retrospective by writer/artist Glenn Head of the graphic novel Chicago. Hate to point this out, but this is NSFW. — Dan

Instead, we have Eisner-nominated cartoonist Glenn Head, whose autobiographical Chicago is gonna be one of the big books of the fall, here to pick his favorite Crumb sketches. Head knows of which he speaks: The artist’s meeting with Crumb is a turning point in Chicago and in his own career.

It’s almost impossible to overstate the influence of Robert Crumb’s work on other cartoonists. Any artist looking to do his best, most truthful work must revere him.

In my own memoir I try and show this when meeting Robert when I was 19. It wasn’t pretty.

Of course, the best way to honor Robert’s work on this, his 72nd birthday, is by looking at it.

Here are 13 of my favorite R. Crumb drawings:

1. All of these wires, cables, fuse boxes, etc., that make up our consciousness. … Are they worth it? The little man wonders! 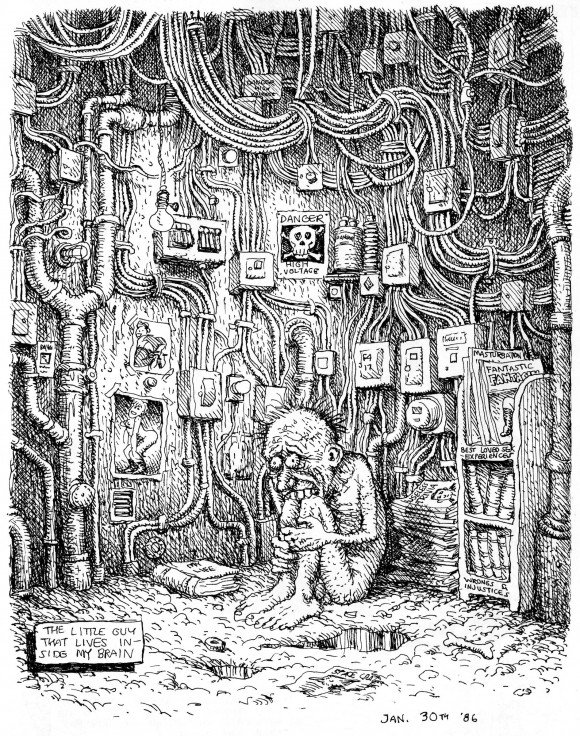 2. Sometimes it seems that people have trouble with Crumb because he captures human sexuality as it really is! Or feels like…. 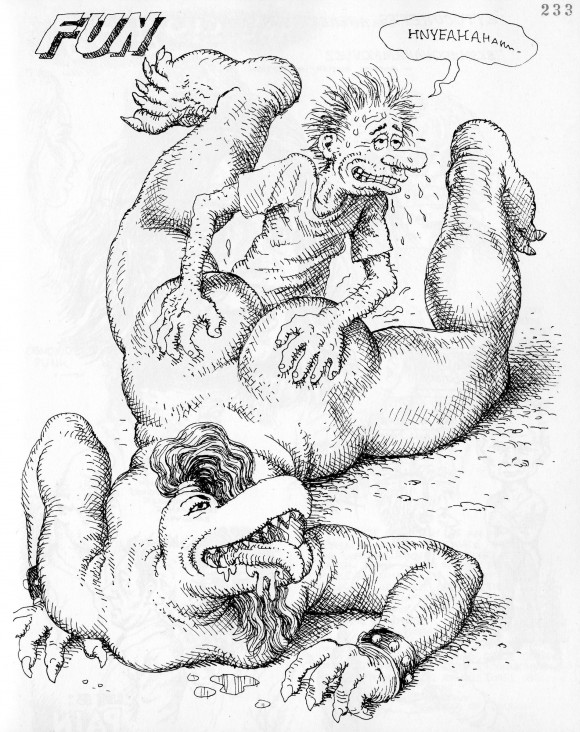 3. My favorite R. Crumb self-portrait because it seems so accurate, both slightly pained-looking and contemptuous. 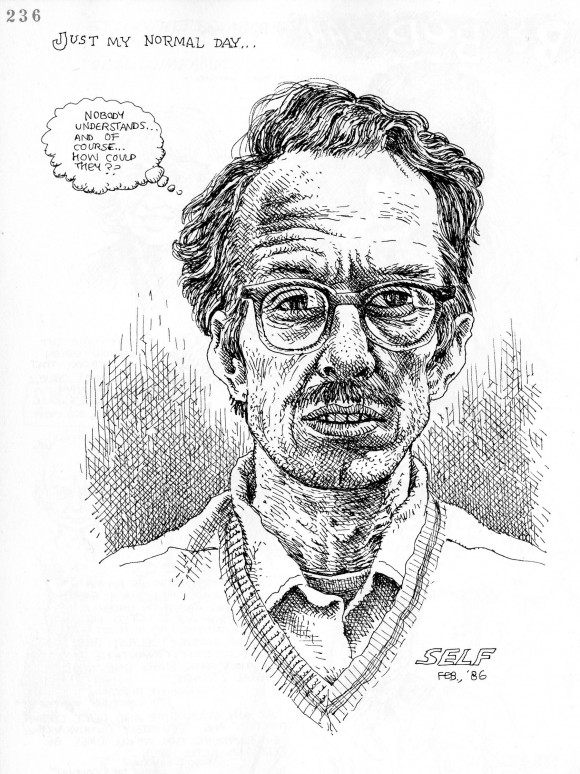 4. This room looks like an R. Crumb ideal. Nice and homey—with no people in it! 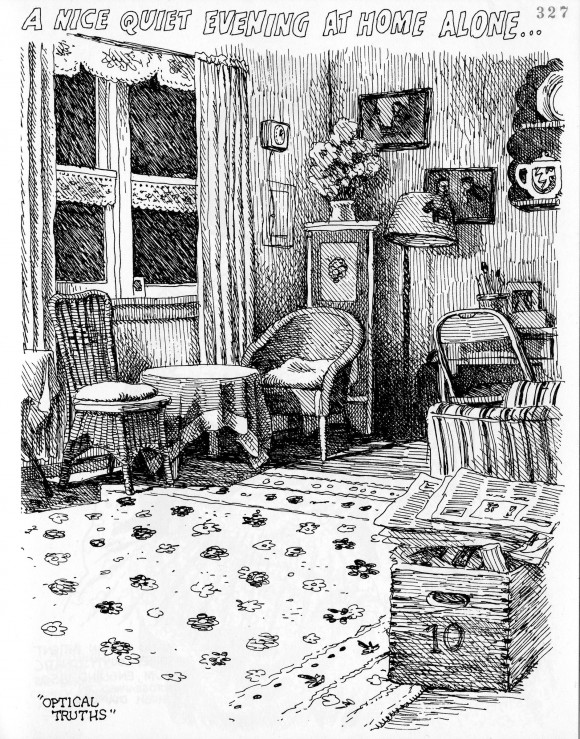 5. I love the feeling of loss and melancholy about this mental patient Crumb drew. She seems disconnected from reality but somehow not despairing. 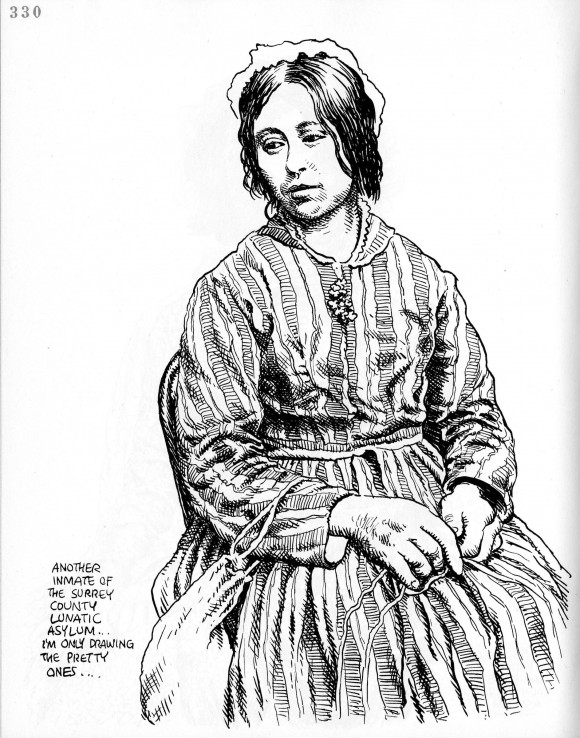 6. One of Crumb’s most powerfully misanthropic drawings. I would love to see Robert do a feature-length strip about his father (pictured here)! 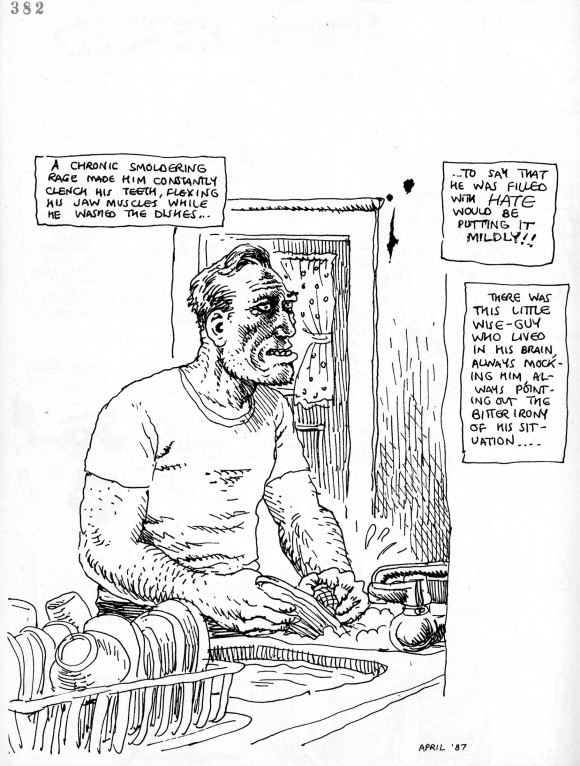 7. I really like what Crumb captures here—the deadness of the eyes and spirit, the slackness of his character. Also the choice in drawing this man who is so far beyond the pale of human sympathy. Crumb shows that this too is a human being. 8. One of my favorite portraits by Crumb. And of course the fact that it’s his daughter; there’s nothing sensual here, but there’s tenderness in Sophie’s eyes and mouth, a softness expressed for her Dad. 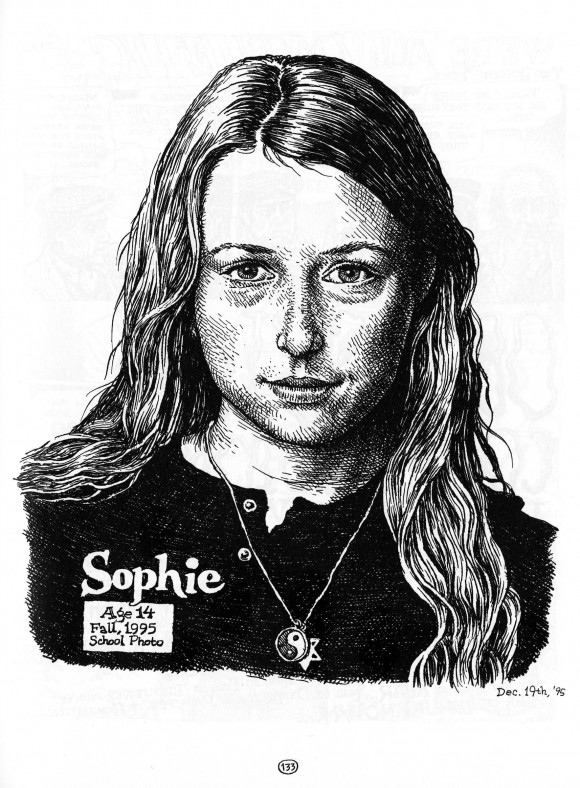 9. A copy of this drawing should be on every cartoonist’s drawing table. And it is hard work … even for Crumb! I love Crumb the person as well as the artist for this drawing. He’s really saying, “Well, it’s no picnic for me either. It hurts!” We all feel it. 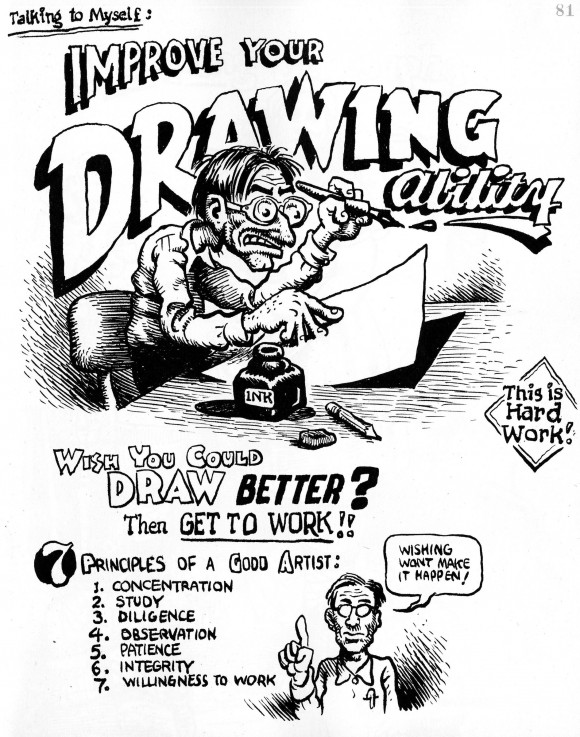 10. Take all humanity out of the picture and what’s left for Crumb? This beautifully drawn tree! 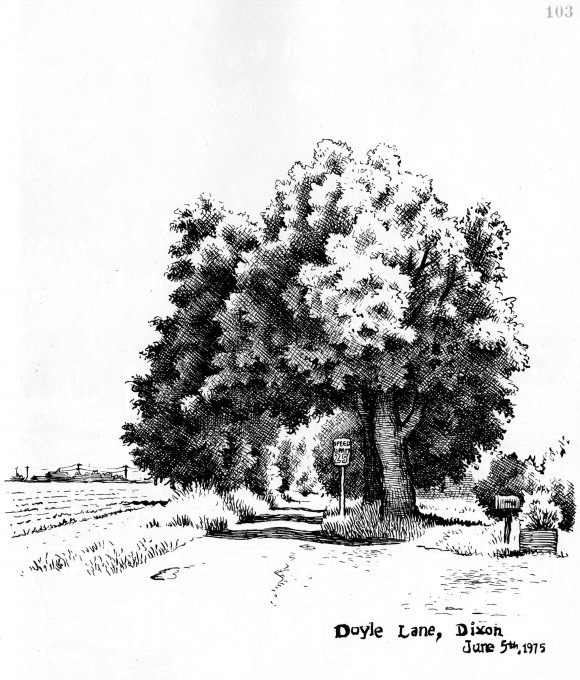 11. Lawn jockey’s revenge on suburbia! If this drawing was any less racist it wouldn’t work at all. It depicts the guilt and fear residing in our gated communities. 12. Say all you want about this chiaroscuro, light and dark business, yeah it’s great, but … what’s mind-blowing is just the sheer voluminous mass of ass here! 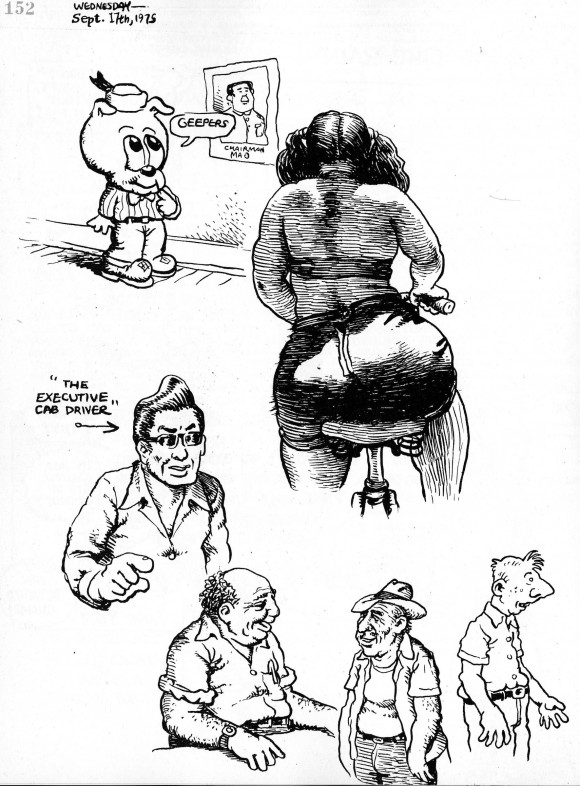 13. Game over! Being told to grow up … by a woman who has! Every guy fears this moment—and runs from it. From Crumb’s great epic: Whiteman Meets Big Foot (Home Grown Funnies, 1971).