We could all use a brighter world…

One of the things I love about being a comics fan on Facebook is getting to see creativity that goes beyond the ranks of the established pros. For example, I’ve written of Walt Grogan, an amateur colorist, designer and historian who has since become a 13th Dimension contributor. Walt does a terrific job and you should click here to check out his snazzy work.

Another name I see in my feed all the time is Rich Seetoo, who, like Walt, will color or re-color great comics images and post them. So I asked Rich to pick 13 of his faves and send them on over; you can catch those beauts — by the likes of George Perez, Jerry Ordway and Neal Adams — below.

“I was born under the cover date for Aquaman #31 (February 1967). I first discovered comic books at age 8 while visiting a friend’s house and I was hooked,” Rich said. “The first comics I bought on my own were Invaders #1 and Defenders #26 at the corner 7-Eleven. I became friends with the owner and he eventually allowed me to cut open the comics on delivery day. (Back then, comics were bundled like newspapers.) My first comic book stores were in New York City: Village Comic Art, The Batcave and Forbidden Planet. I discovered back issues and more new comics at these shops. It was awesome!” 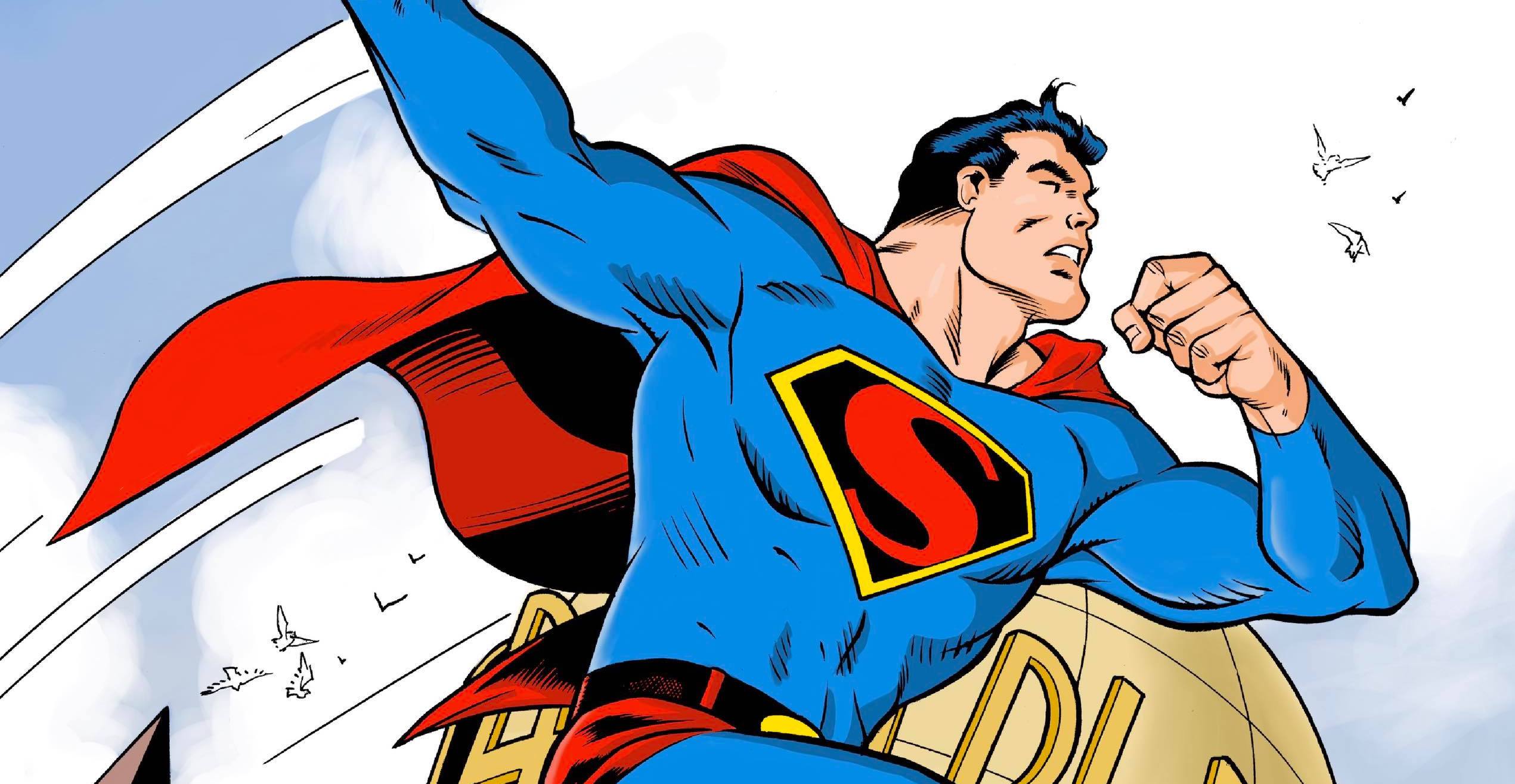 Rich bounced in and out of the comics industry for a number of years – as a Kubert School student, sometime inker and retailer. Eventually, he left the field but his passion continued to burn and he found a creative outlet as the pandemic hit in March 2020.

“Working from home full time and staying indoors necessitated me to create my own entertainment,” he said. “I started creating custom Marvel corner boxes using my collection of Bowen mini-busts and statues. After creating over 1000 corner boxes, I was done and I needed something else to create. At the time, I had bought a collection of classic Superboy stories. I felt it should have been in the DC Archive format. Since it wasn’t, I created one. This inspired me to create over 100 more DC Archive covers featuring popular and forgotten characters. … In Sept 2021, my daughter showed me how to use Procreate on the iPad. I started coloring some artwork I had inked and posted it on Facebook.”

Whether for fun or for hire, Rich says he’s now colored well over 125 pieces of art:

“Surprisingly the vast majority of my work has featured only DC characters. I have picked cool Marvel images to color (i.e., lots of Kirby pages and pin-ups) that are just waiting for me.”

So check out these 13 GROOVY ILLUSTRATIONS – and if you want to contact Rich to color your image, shoot him an email at rseetoo@verizon.net. 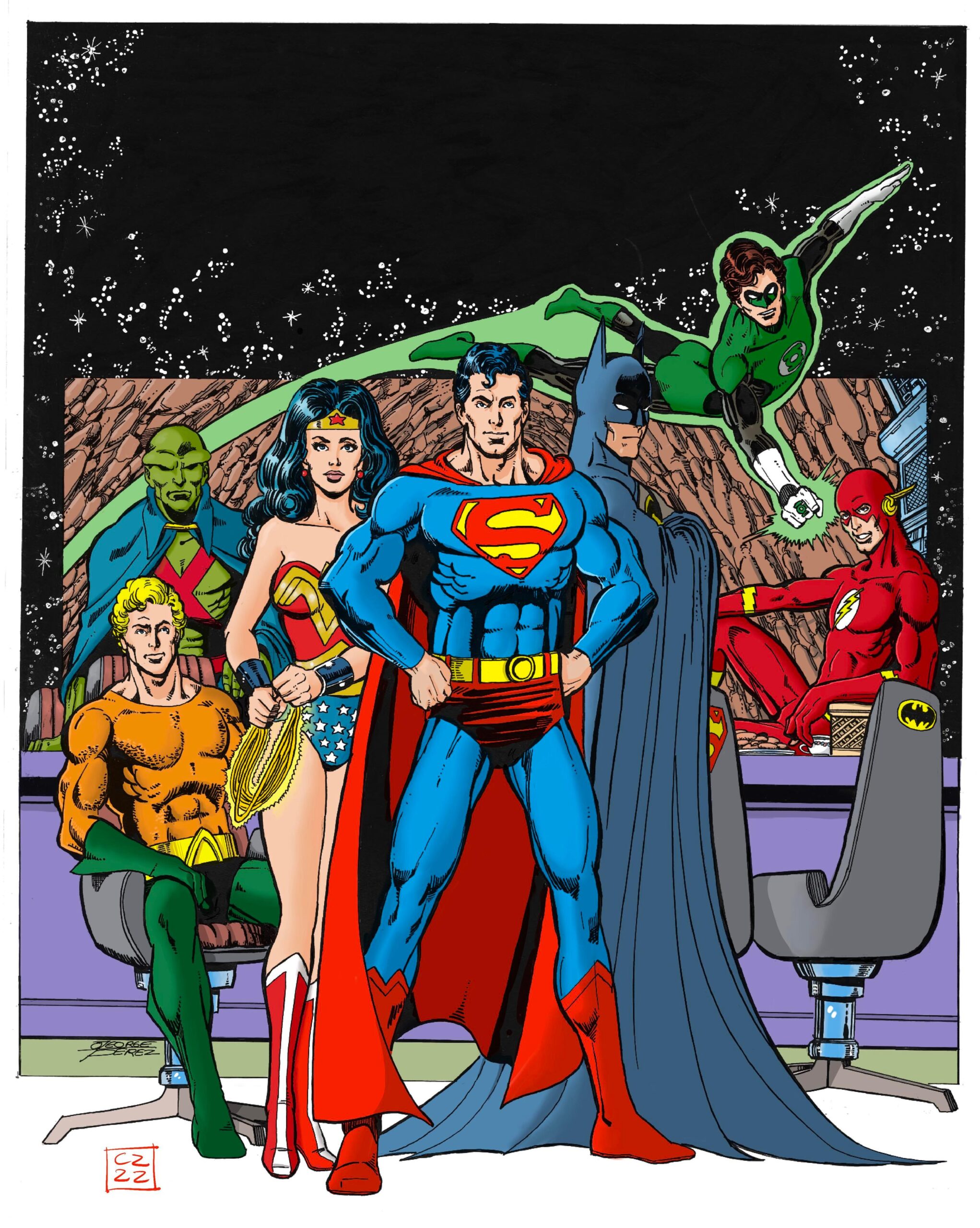 Speed Force, by TJ Frias. This piece was pencilled by TJ Frias circa 2010, inked by me in 2017 and colored in 2021. It was my second collaboration with TJ. I tried to give each speedster their own shade of red so they didn’t look like they bought their uniforms at the same store. 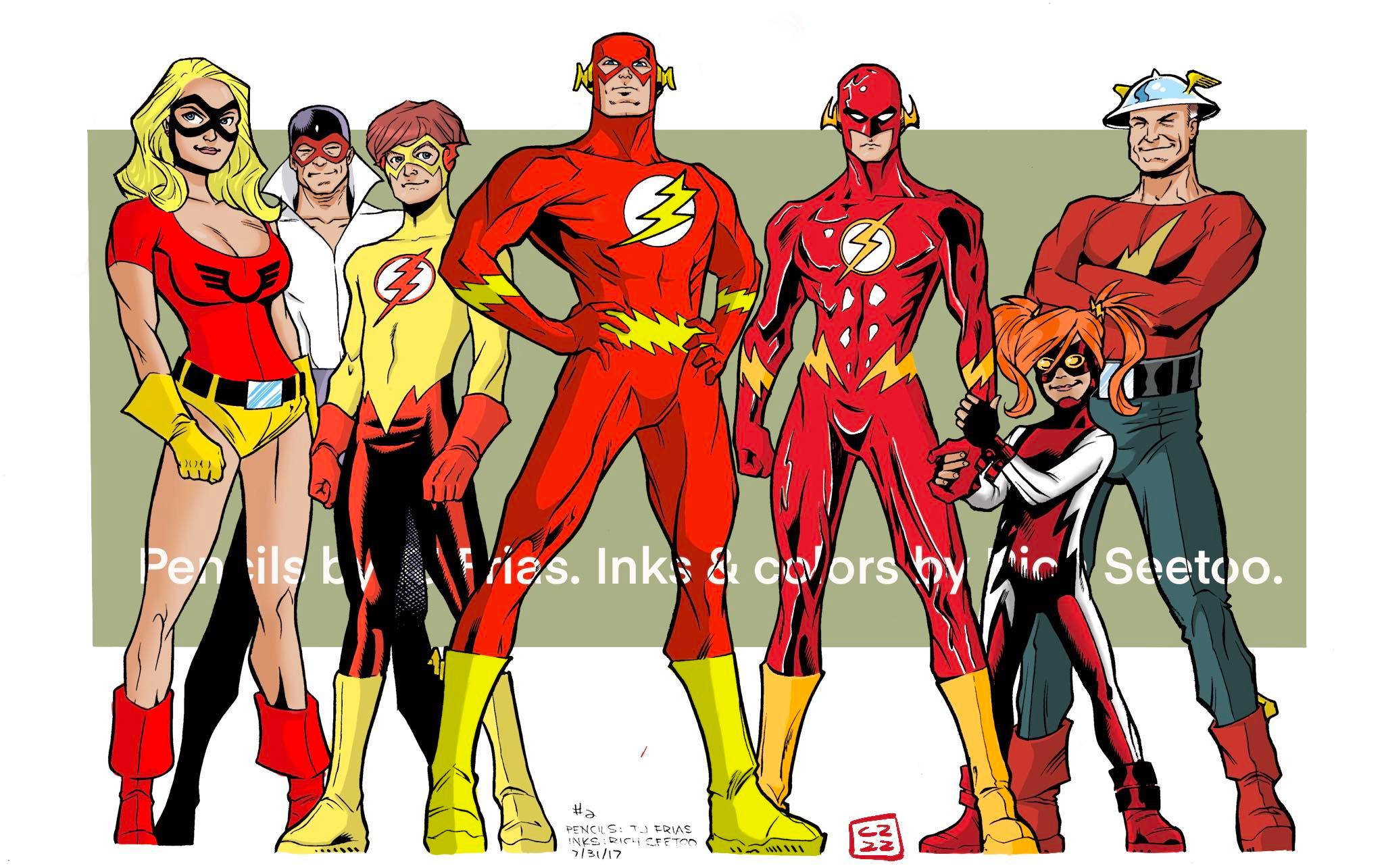 This Vigilante piece by Gray Morrow was used in DC’s Who’s Who series from the 80s. My friend, Brian Morris, owns the original black-and-white art and shared a high-res scan of it with me. I used the Vigilante’s colors from the cover of Leading Comics #1 as my guide. I like the darker color shirt instead of the bright blue.

Crisis On Multiple Earths Vol. 5, by George Perez. I found this George Perez cover at Heritage Auctions’ website. I have a thing for coloring big group shots and the late master did not disappoint here. 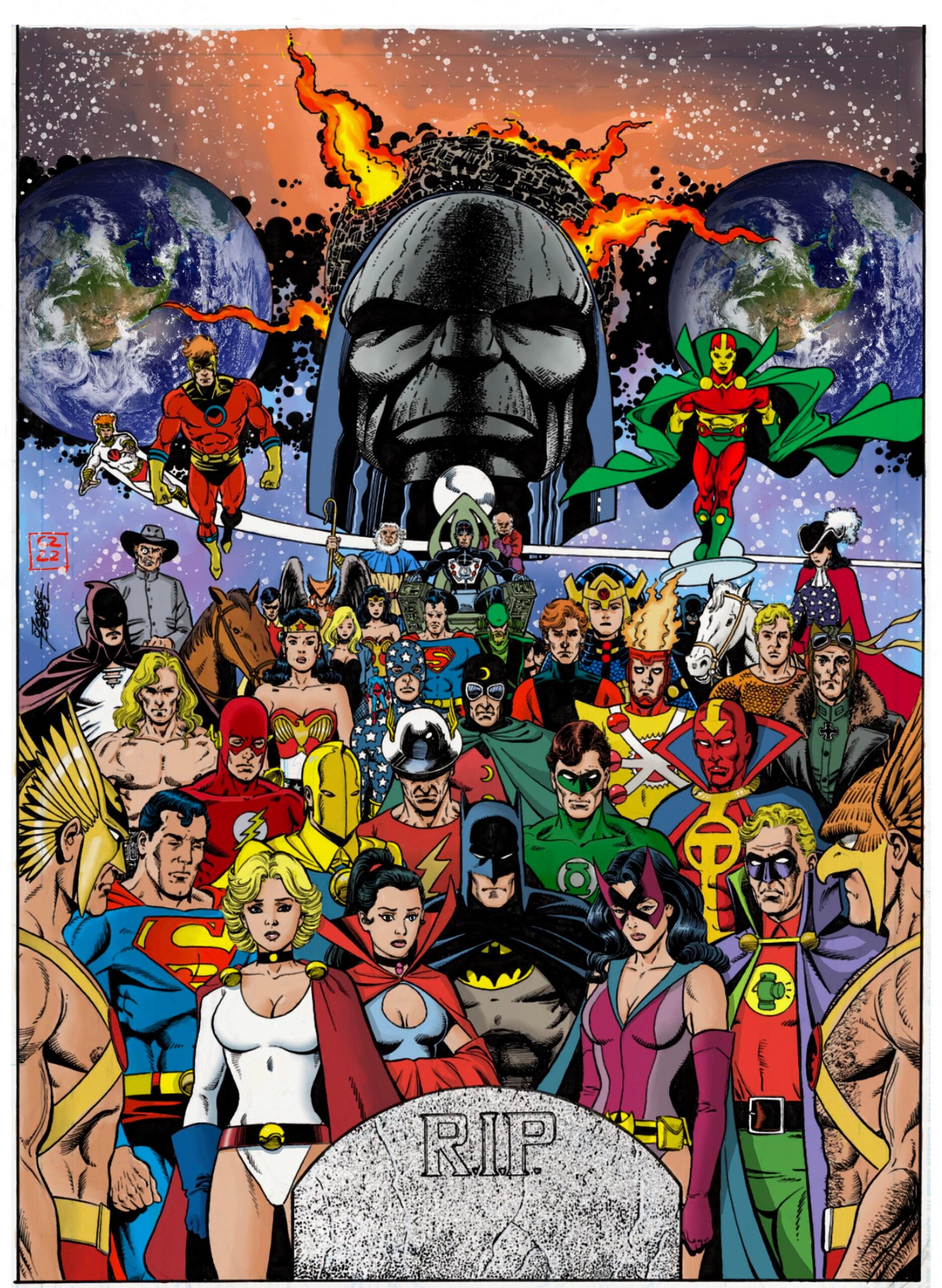 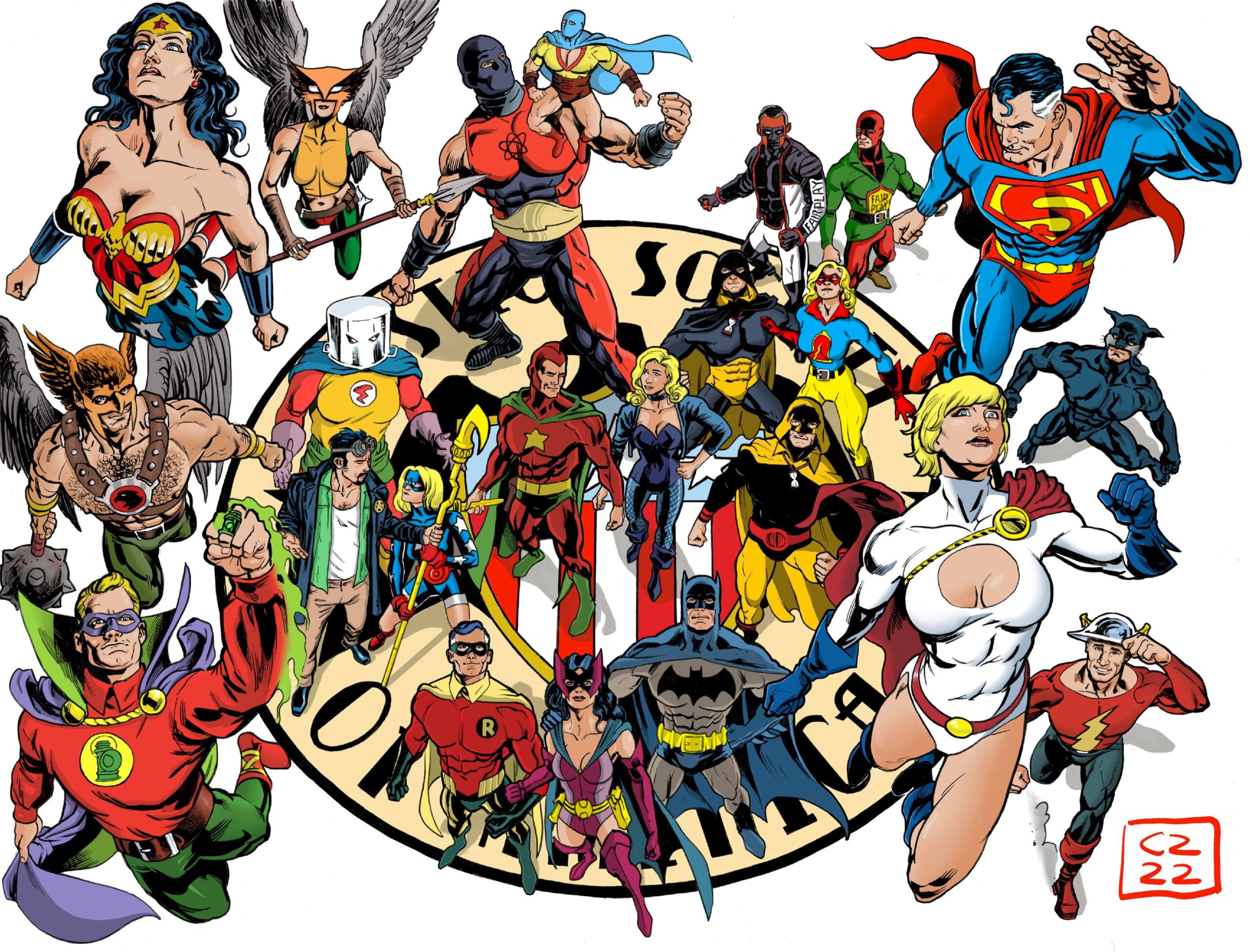 Superman, by Tom Grummett. I inked a blue line of Tom Grummett’s Superman a few years back. This looks like the Fleischer version so I colored it as such in December 2021. This was the first piece that I colored that had a real background. 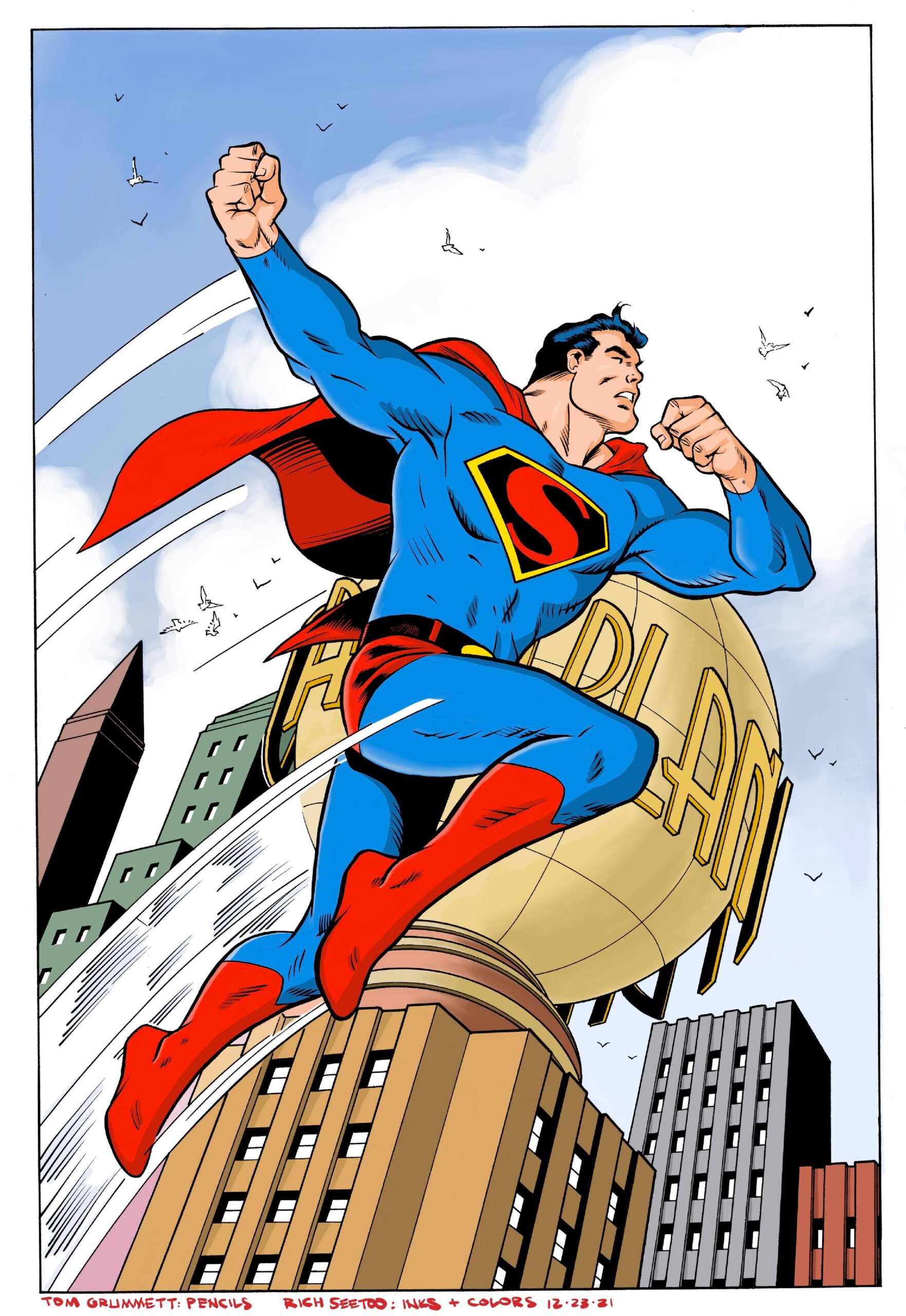 DC Special #29 Re-Creation, by Bob Layton. In 2008, I facilitated a commission from Bob Layton for my friend, Brian Morris. Bob recreated Page 1 of DC Special #29 (Sept. 1977) and included the Huntress at Brian’s request. This was the fifth piece I colored when I started using Procreate. 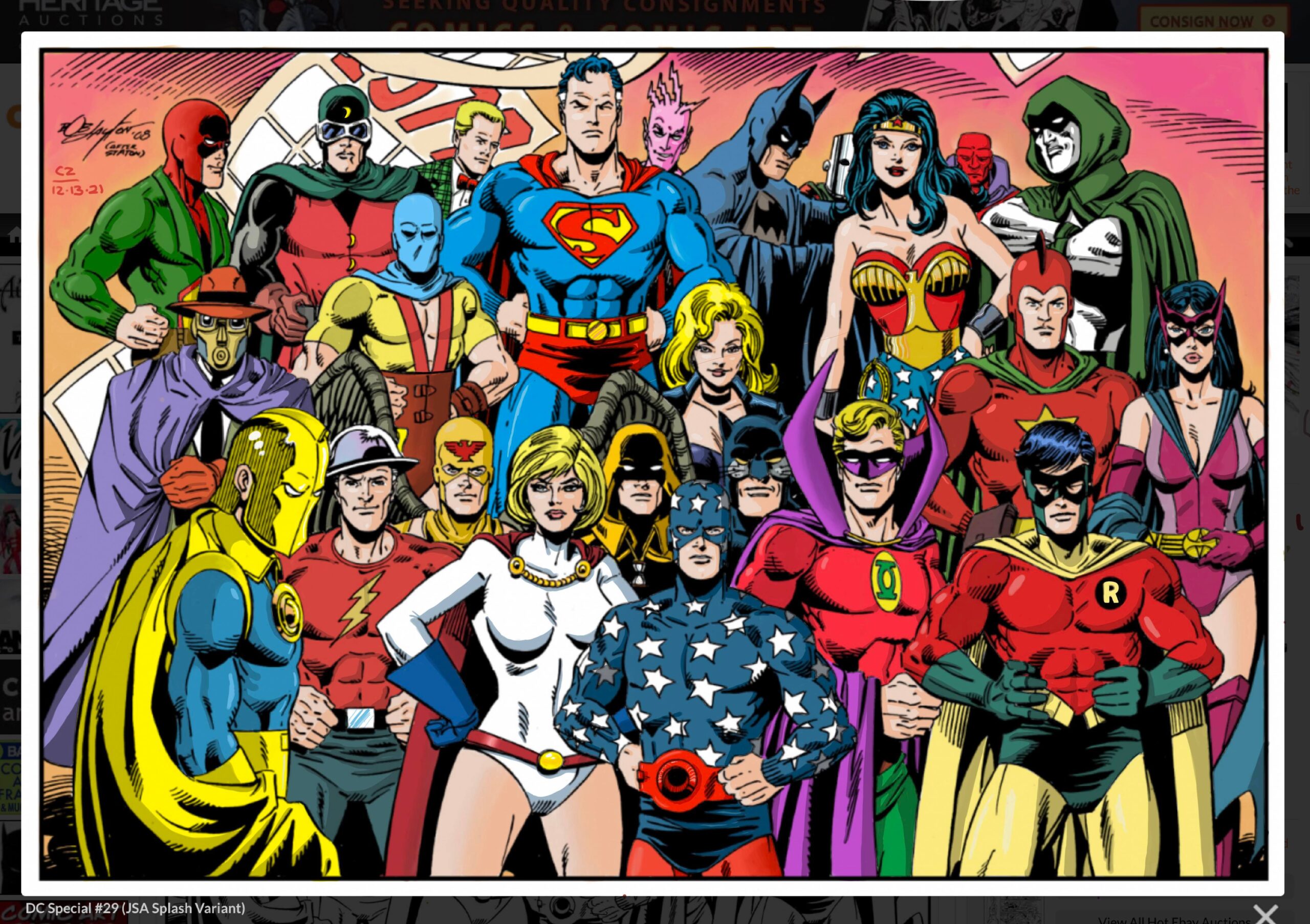 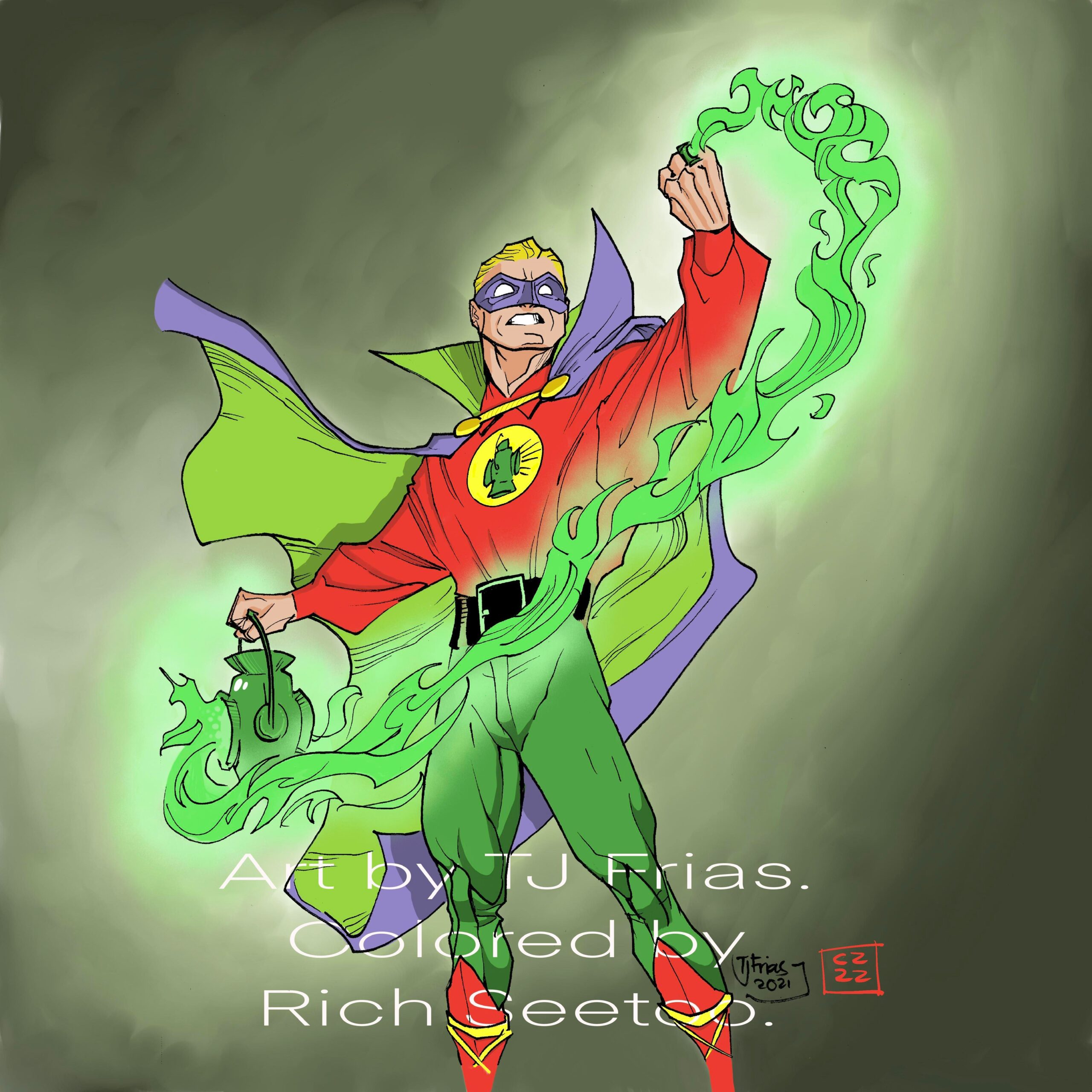 Justice League of America #21. I found three pages of JLA #21 (Aug. 1963) on Heritage’s website and colored them up. These are the first interior pages I colored. A month later, Scott Maple asked me if I wanted to color his page from this issue. My jaw dropped when I saw that his page was the first meeting of the JLA and JSA. Of course I said yes. 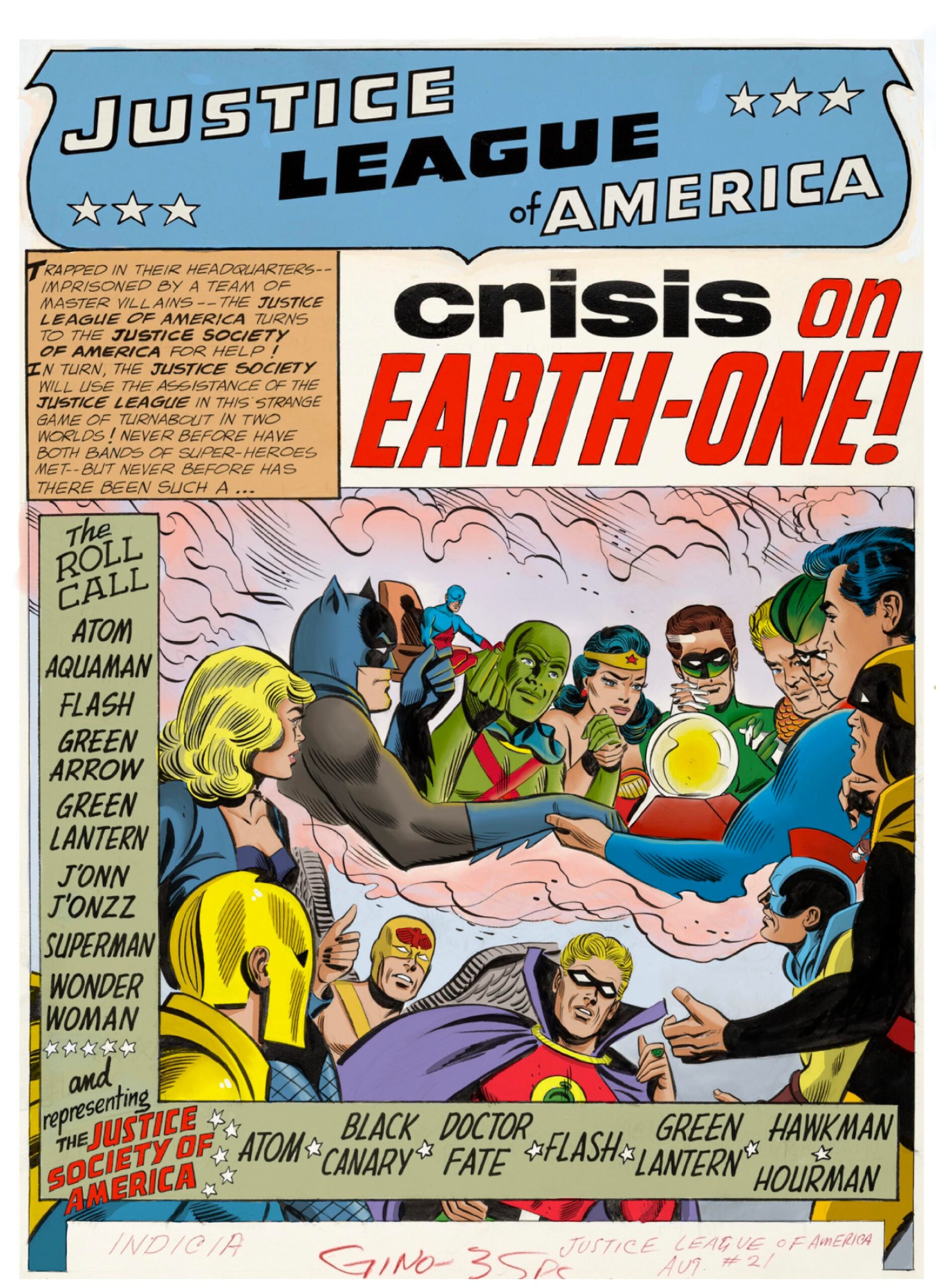 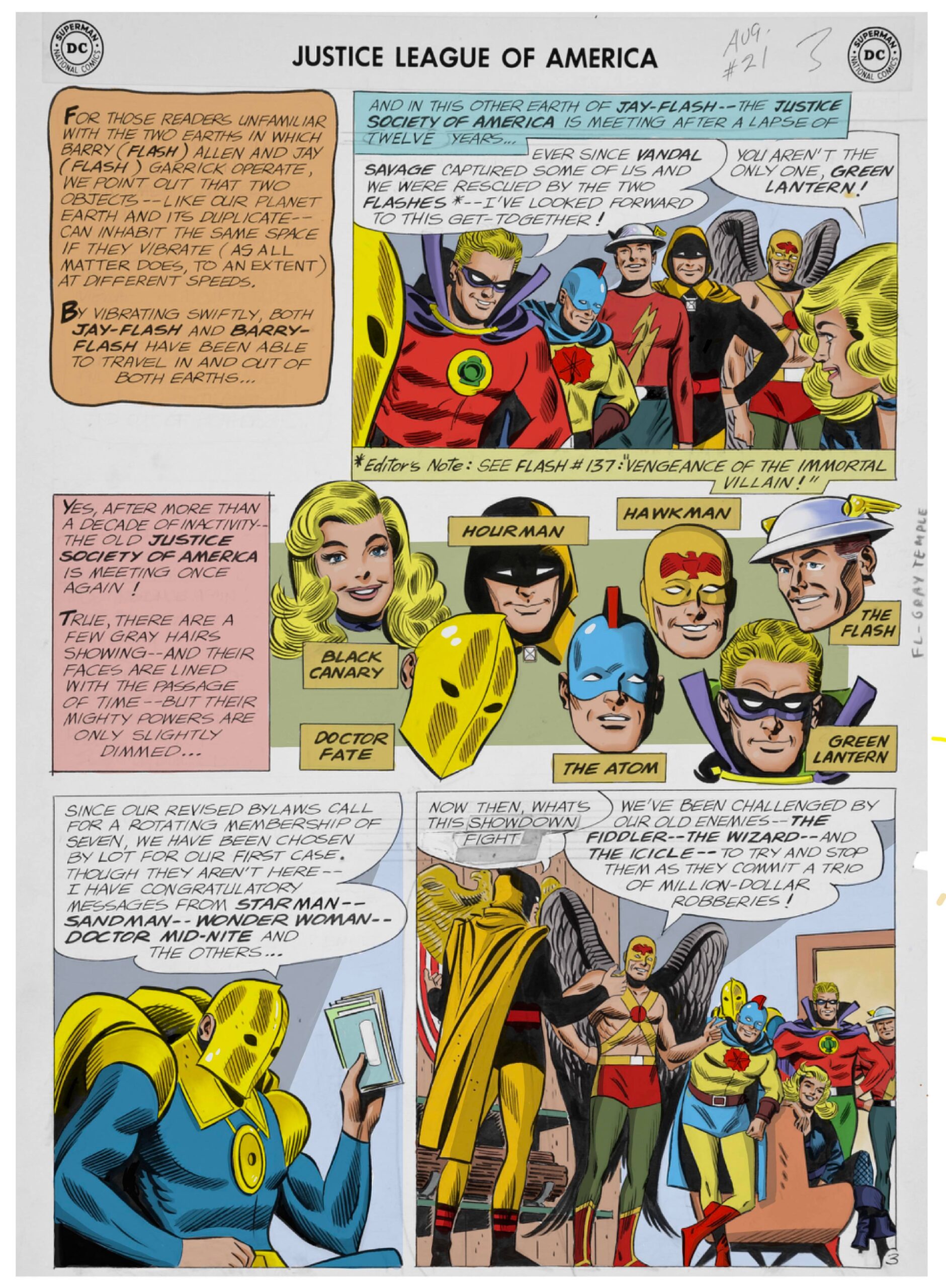 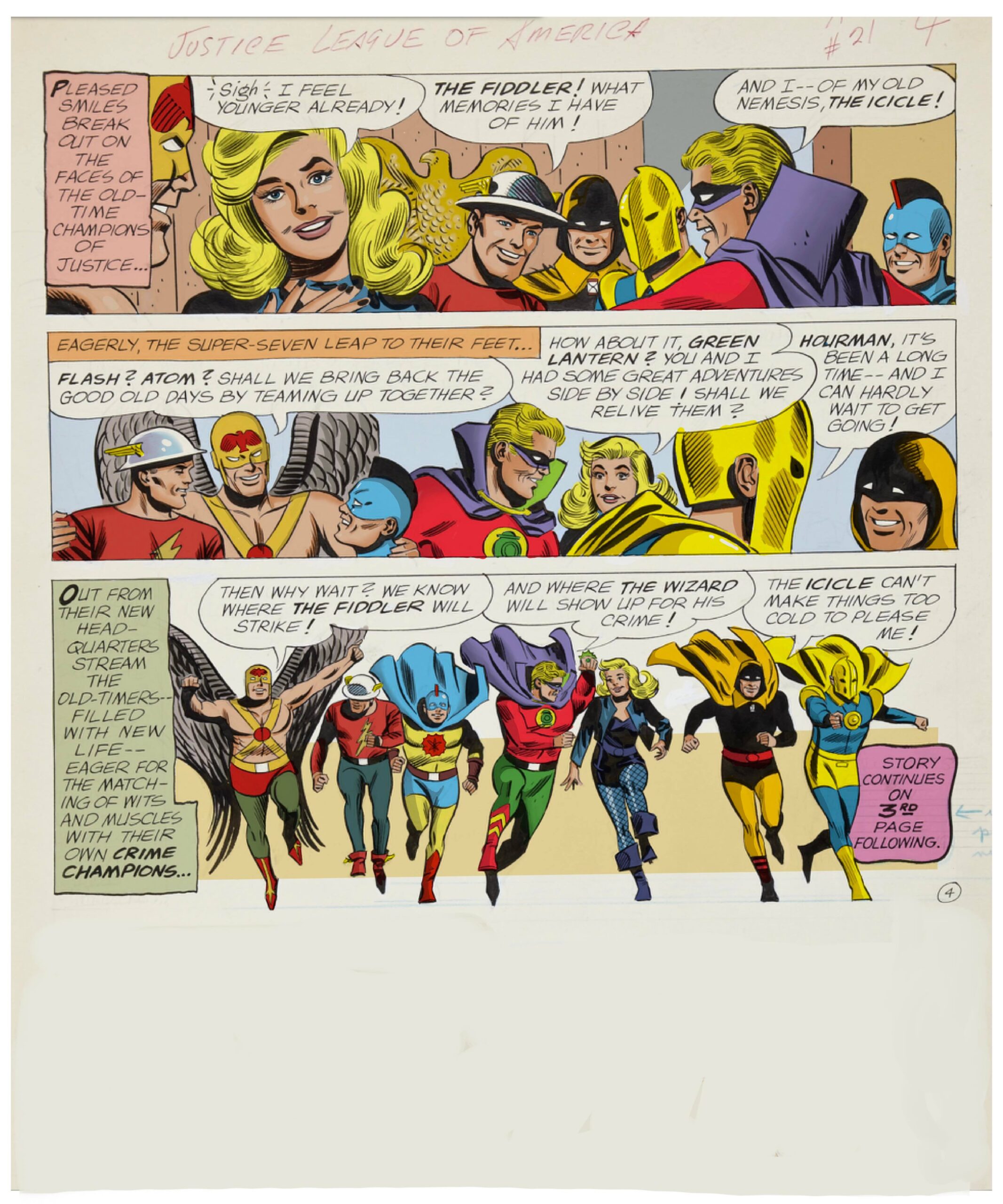 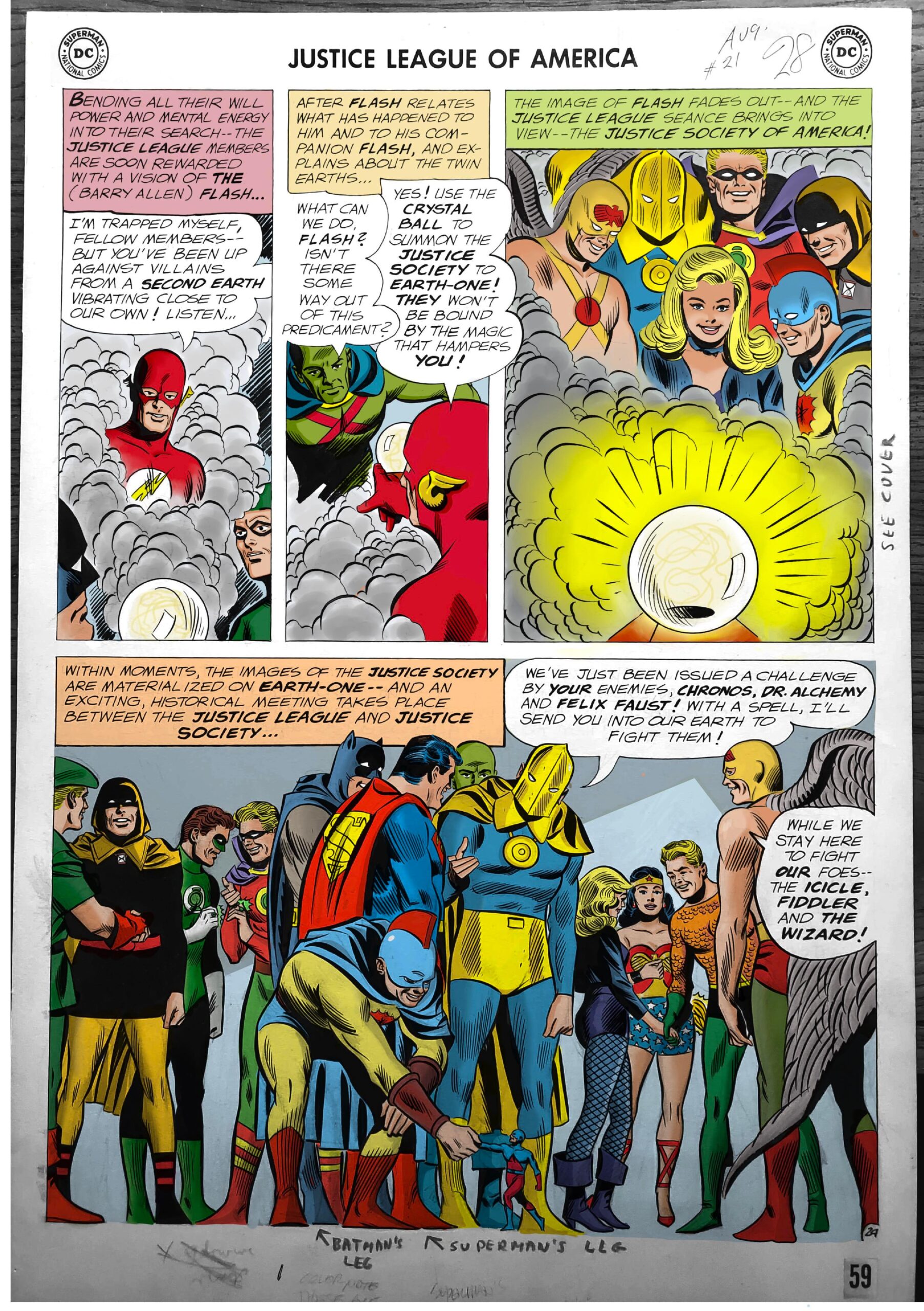 Superman #252 Cover, by Neal Adams. I found the cover to Superman #252 (June 1972) by Neal Adams at the Graphic Collectibles’ website. I had made some color corrections to some of the characters, though I was not aware that the Shining Knight had another look that was used on the printed cover. 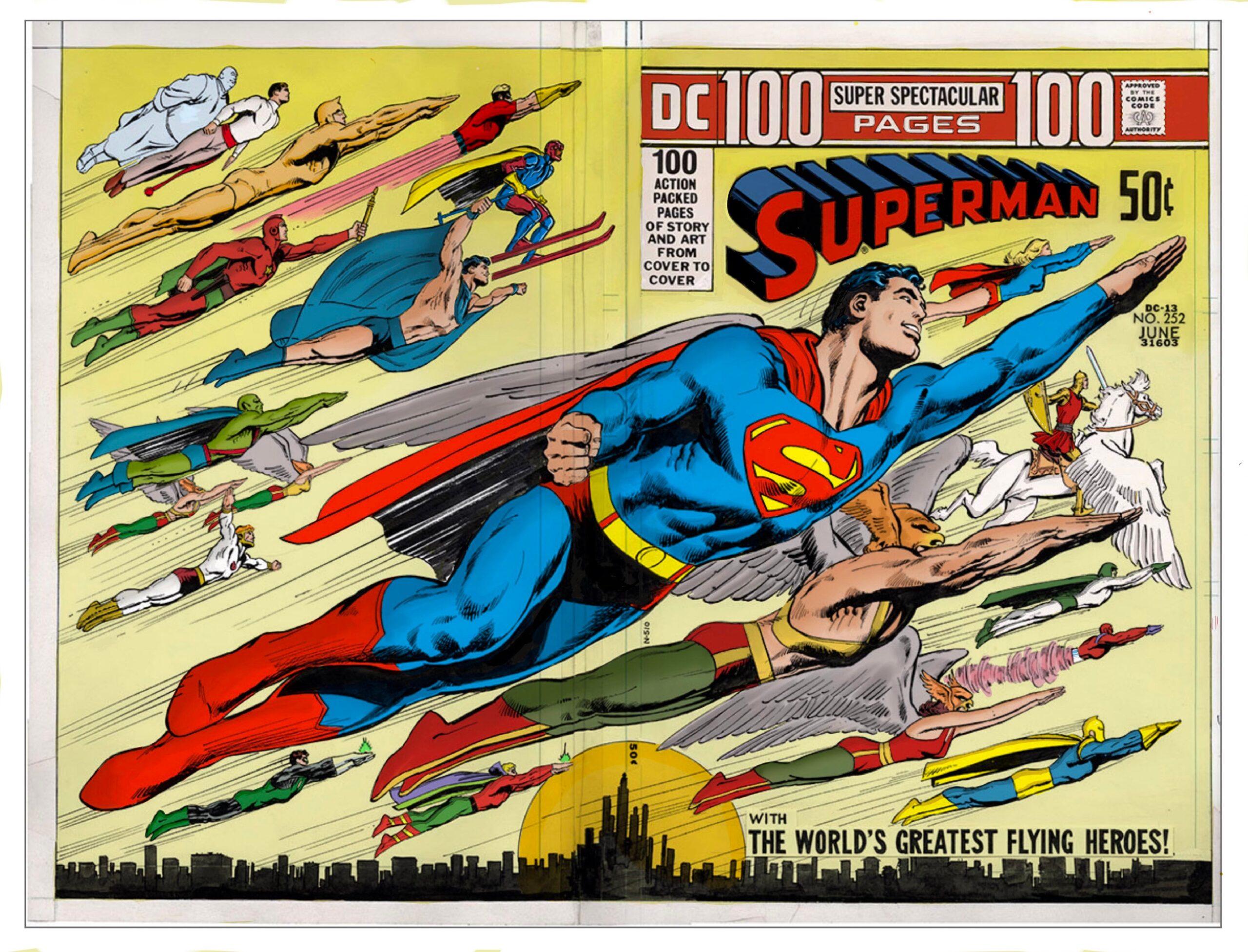 JSA Pin-Up, by Murphy Anderson. I originally colored a medium-res version of Murphy Anderson’s amazing JSA pin-up from JLA #76 (Dec. 1969). I saw that Brian Philbin had a high-res version. I contacted him and he was kind enough to share his image with me. Once in hand, I recolored the entire piece and made a poster of it. 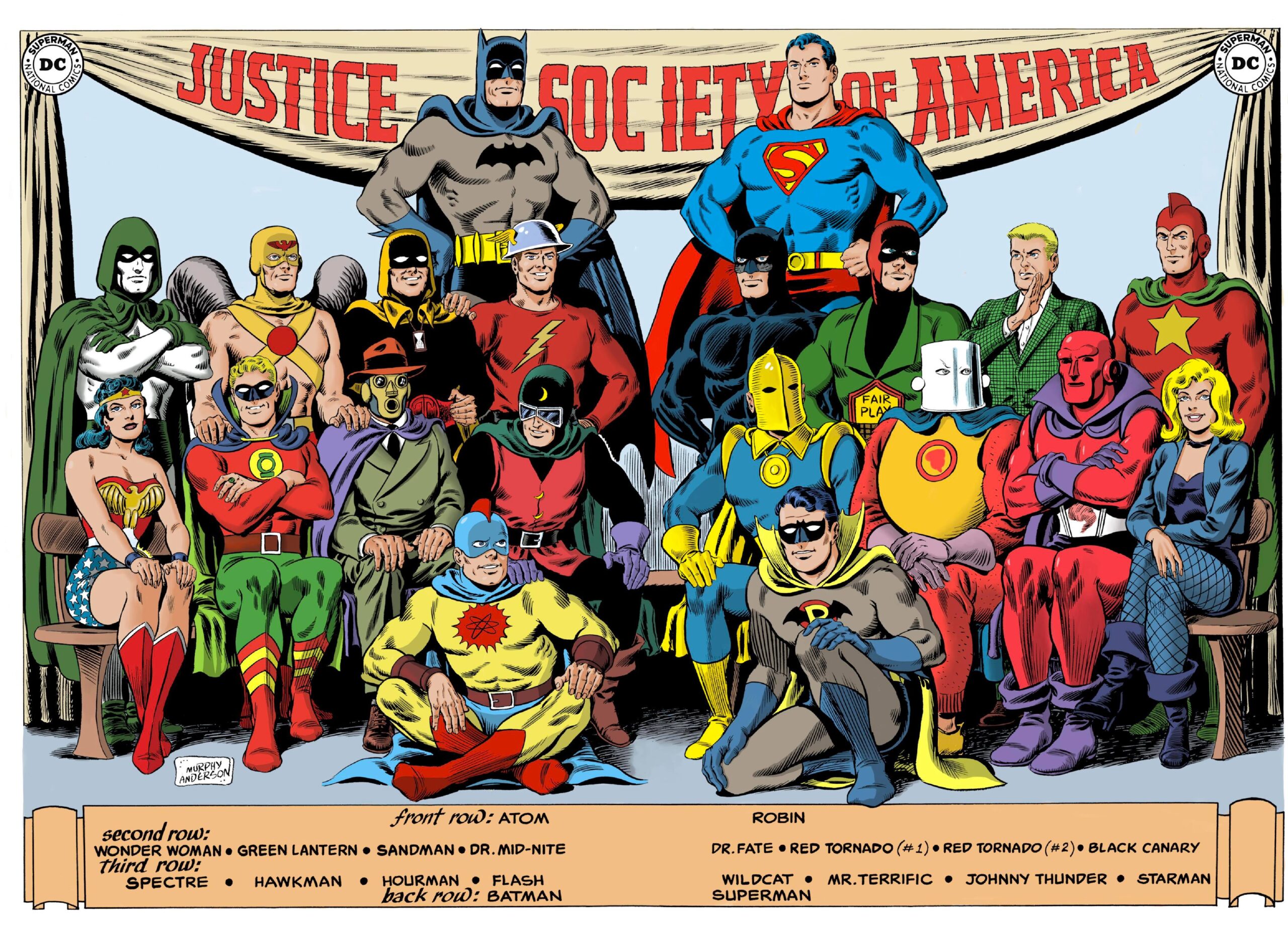 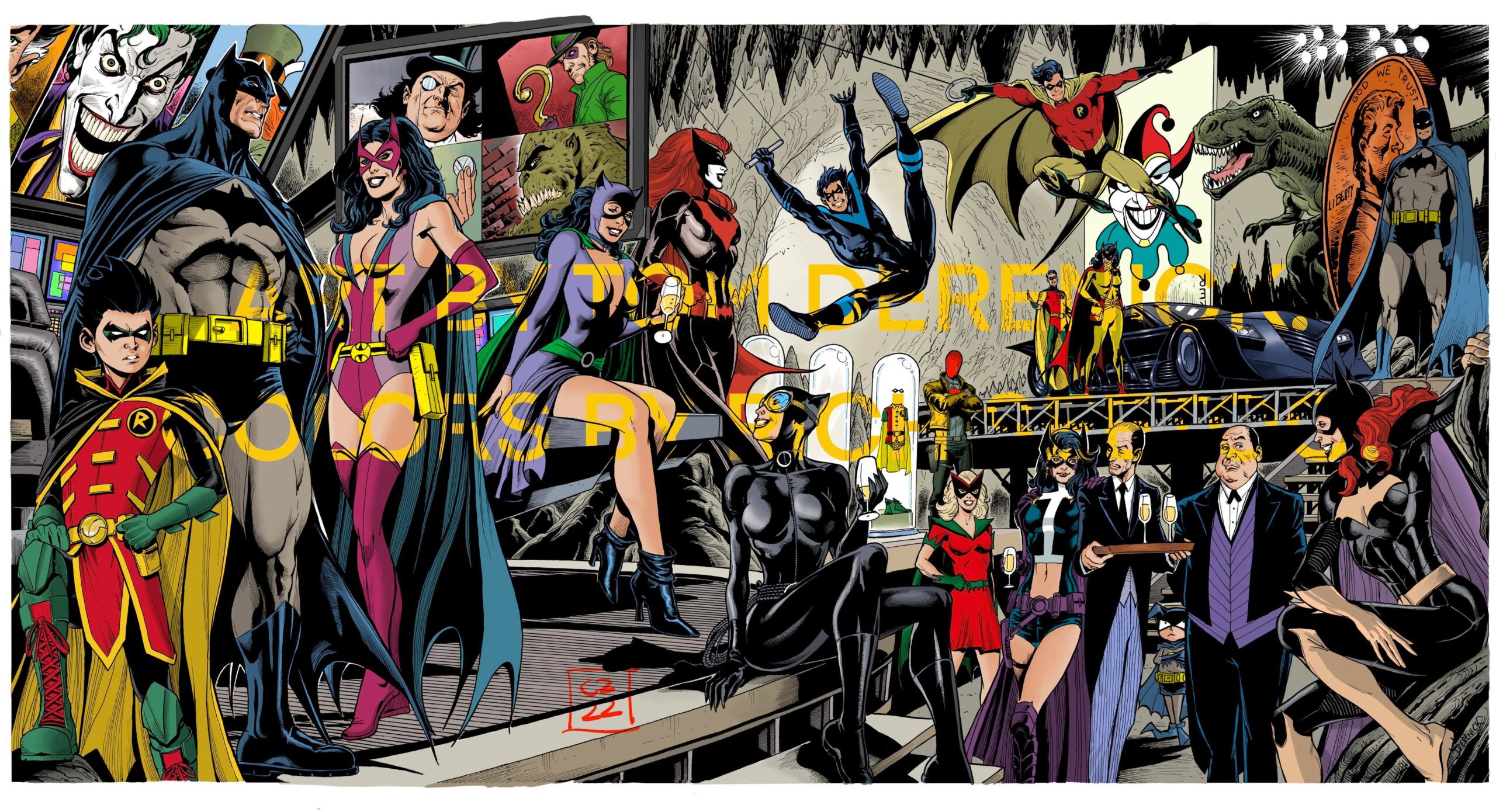 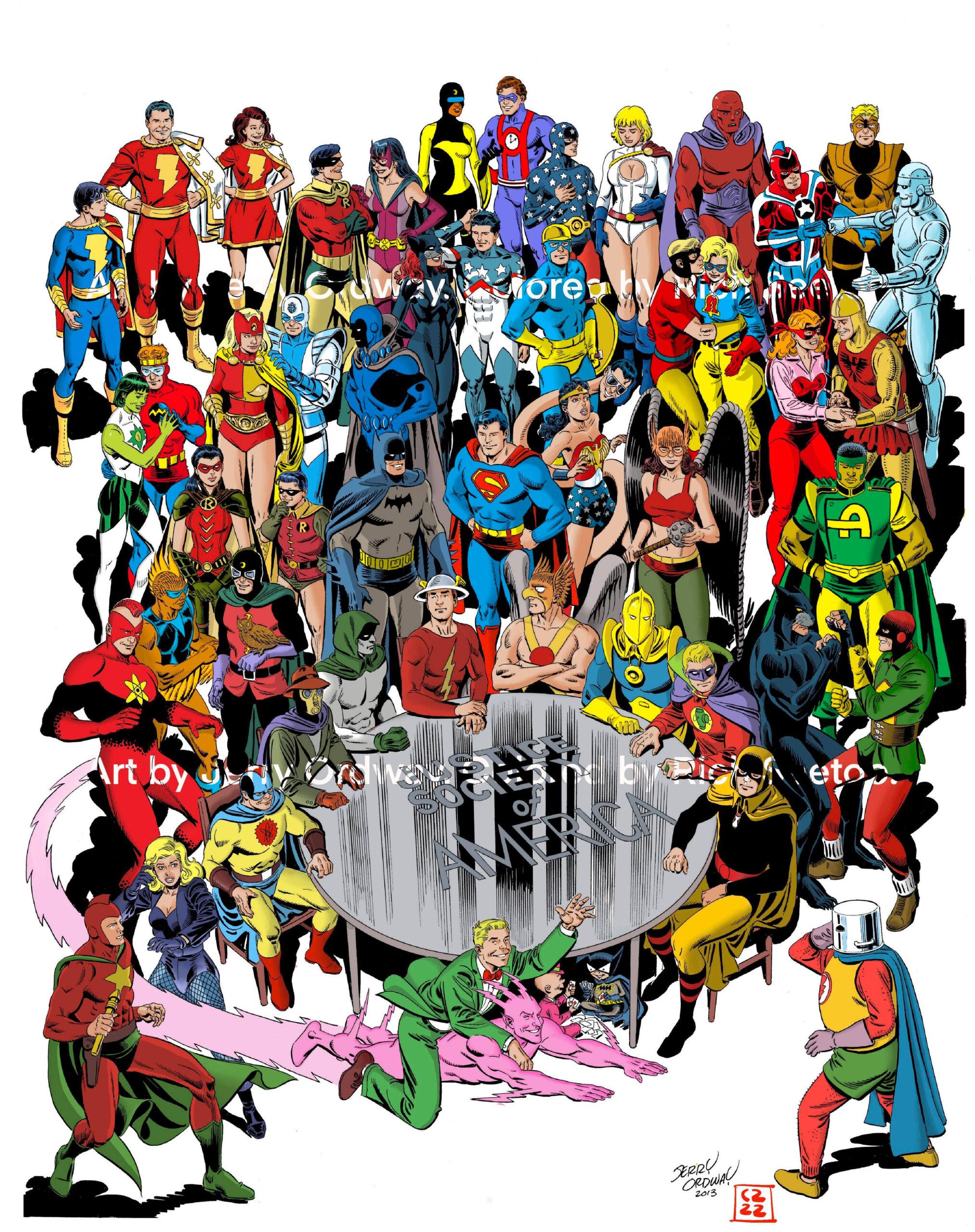 — BATMAN, WE ARE THE GREATEST: The Best Comic Book That Never Was. Click here.