13 CARTOONS: A Salute to GEORGE BOOTH

Dogs ain’t all the way dogs yet…

This is my favorite New Yorker cartoon ever. My wife’s too: 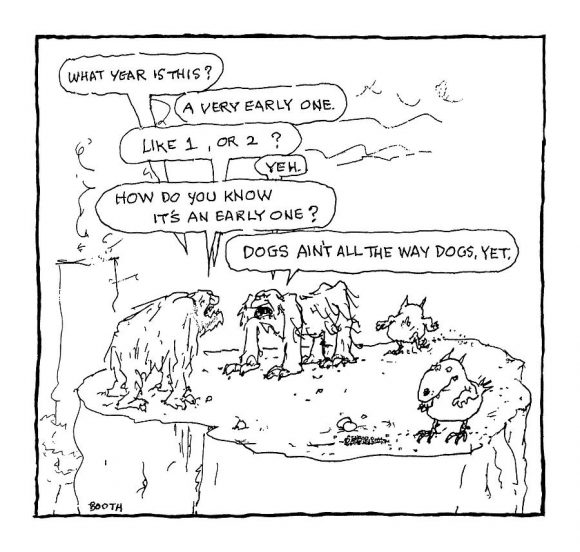 And here’s the funny thing: Just this month, I bought a set of notecards for her with the cartoon on it — not knowing that she bought me a T-shirt with it on it at the same time. Like a kind of reverse Gift of the Magi.

I plan to frame one of the notecards for her. But don’t tell her because I still want it to be a surprise.

Anyway, the timing of this bizarre gift exchange has a funny coincidence attached to it. The cartoonist, George Booth, 91, is the subject of a retrospective at Manhattan’s Society of Illustrators until the end of the year. The Society’s great to visit anytime, but with so many people planning trips into New York City during the holiday season, I highly recommend going to the Upper East Side and checking it out. (Click here for hours and ticketing info.)

The show was curated by our friend J.J. Sedelmaier, who likes to stop in here from time to time with good stories to tell. And he has a few about putting this exhibit together.

So here’s J.J. — and 13 Great George Booth Cartoons, selected by Mr. Sedelmaier himself:

I’ve spent since June steeped in “George Booth-land” and I’m going to miss the level of creative saturation the past five months have provided.

It took several years of pitching the idea of a career retrospective for him –something that had never been done — before a lunch at the Society Of Illustrators with Executive Director Anelle Miller set things in motion.

“Didn’t you want to do a show on George Booth’s work ?” I think were the words that Anelle said. I had pretty much put my hopes on a backburner, so I actually thought I was hearing things. Fortunately, I had already discussed the possibility of doing a show with George and his wife Dione, but they had cautioned that it was going to take time to prepare. 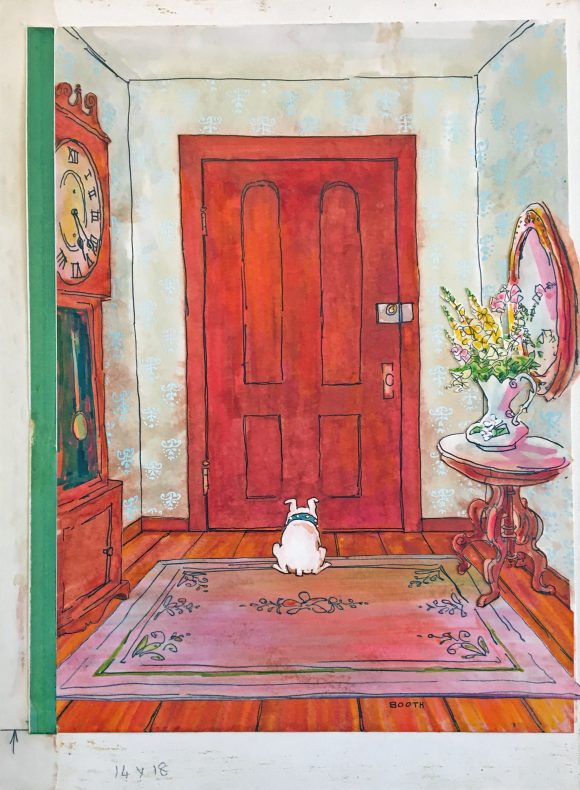 His artwork and archive was located in two different Long Island storage lockers, as well as their daughter Sarah’s apartment in Brooklyn. This was more of an asset than a problem as far as I was concerned. One of the most difficult aspects of curating ANY show is gathering the material and choreographing all the different people and schedules that will allow you to get your hands on the material you need, and WHEN you need it. This scenario with the Booths at least meant I could deal with one set of people – and such lovely people they are!

It took three trips to Crown Heights, Brooklyn, and one out to Long Island to grab up everything and move it all into our studio in White Plains. It was heaven going through all the work! There were drawings stretching from when George was in elementary school all the way to the present. There were not only his famous New Yorker cartoons, but also his watercolor covers – including his very first one of his well-known bull terrier waiting patiently at the front door. 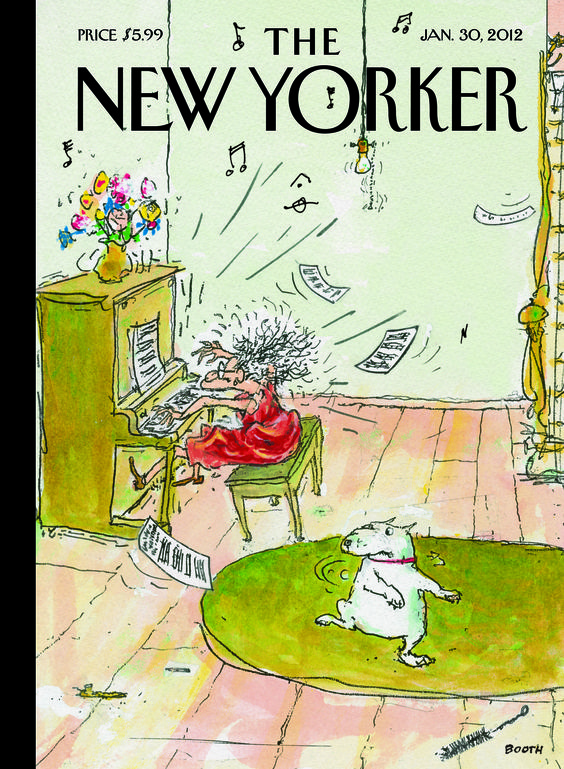 Sometimes I’d look up and see the clock in my office coming in on 4:30 a.m. and I wasn’t tired at all! There were literally hundreds of drawings, and because of the size of the venue, we had to end up with about 50. Thanks to the help of Richard Berenson, Steve Compton and the rest of the crew at the Society, it all came together splendidly. We even installed his trademark single incandescent lightbulb hanging from a lone electrical cord! 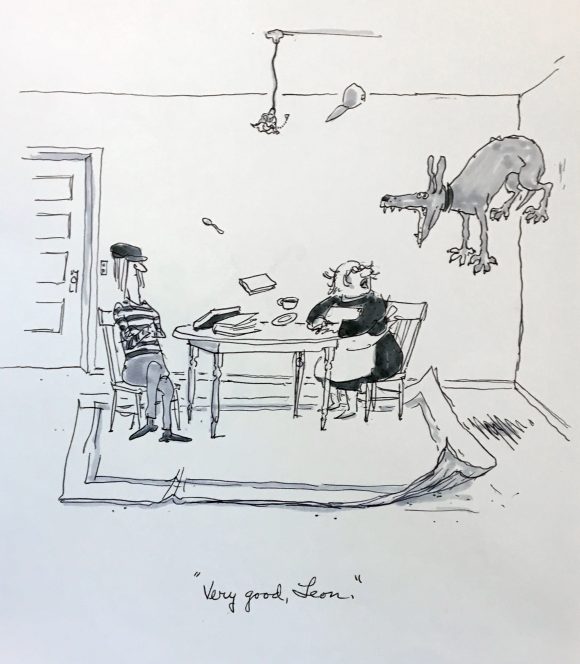 There’s also a focus on the work that George has done for animated projects. Both the late Frank Terry and myself have had the ridiculously hilarious time doing multiple projects with George. Here’s a piece I wrote for Print Magazine profiling one.

We were also fortunate to have CBS Sunday Morning do a segment on George, which you can see here.

Please get yourselves to the Society Of Illustrators to see the show before it ends on Dec. 30. It’s truly a treat, and it’ll give you a chance to see the work of a true original… 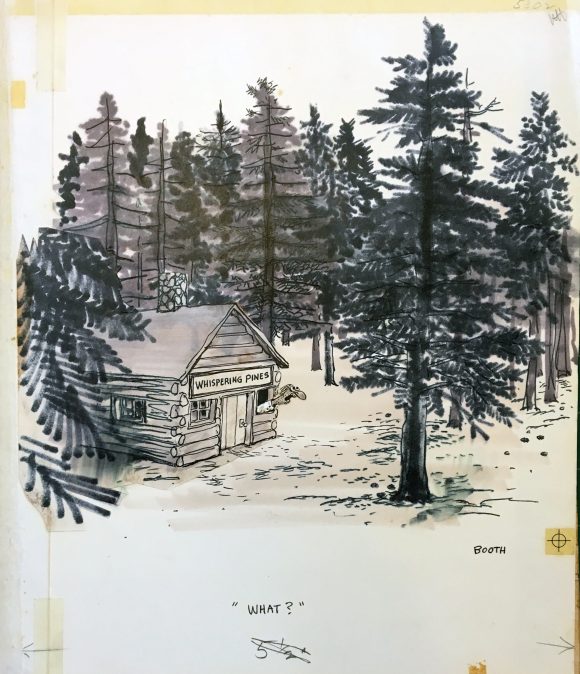 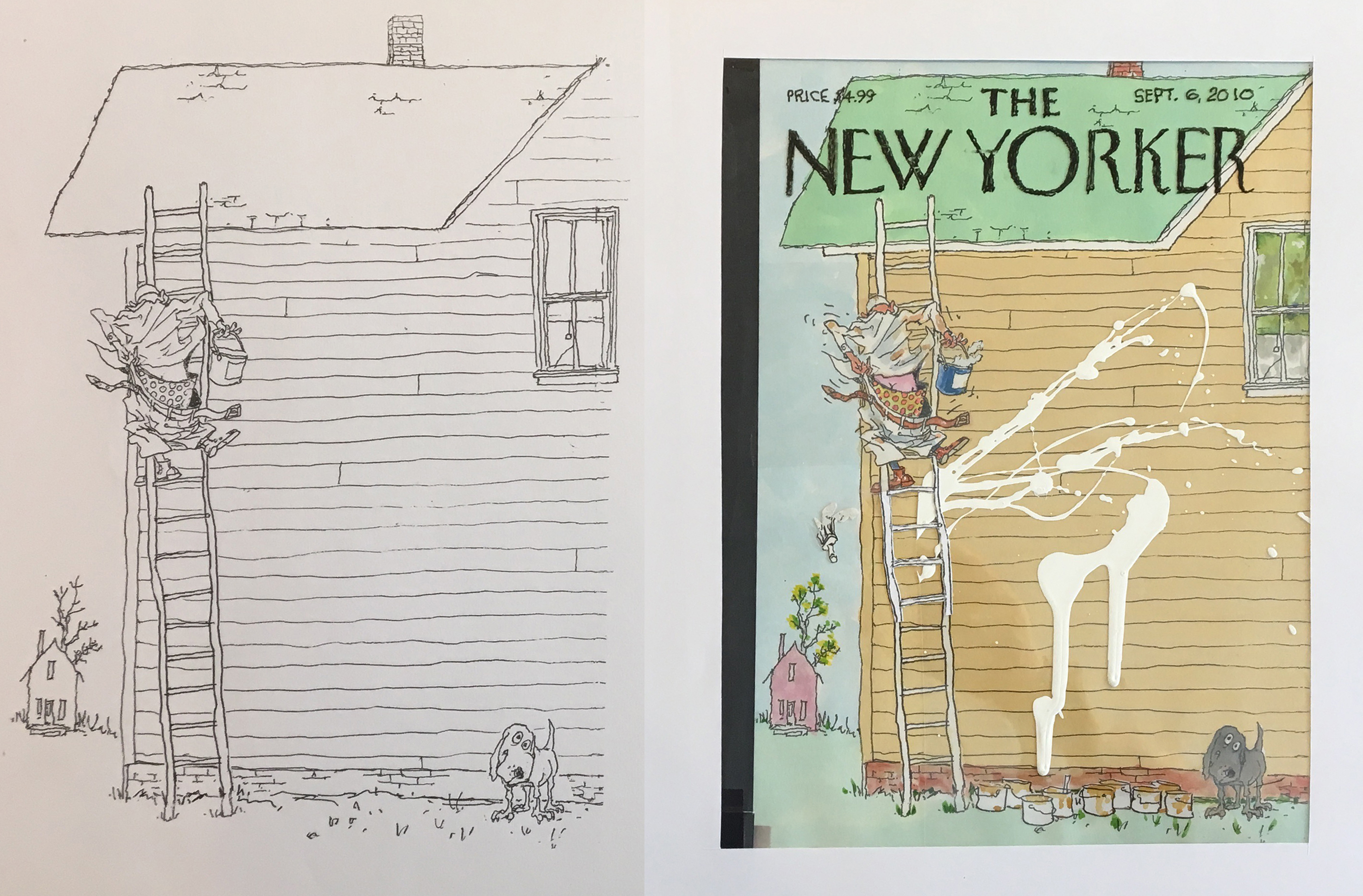 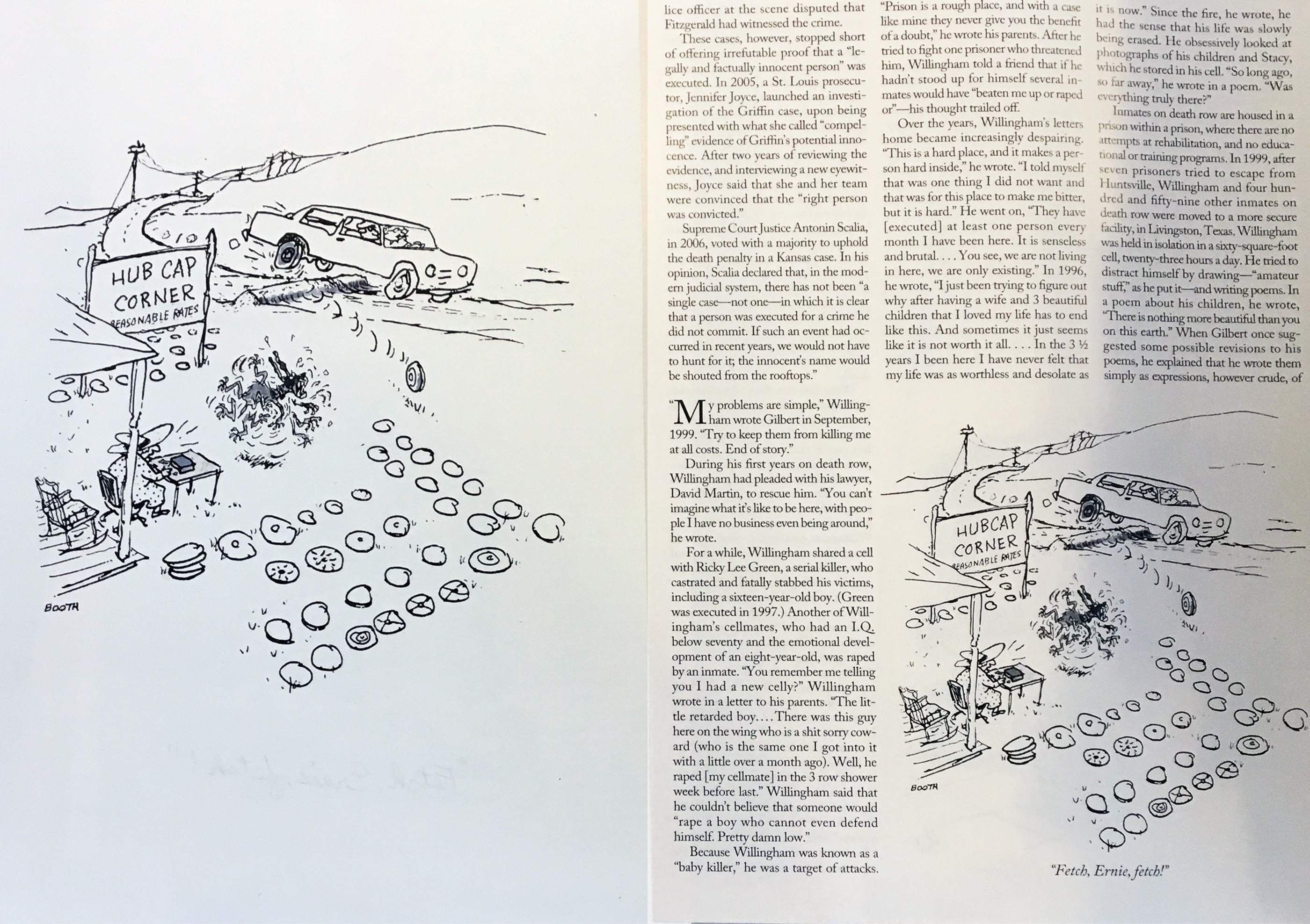 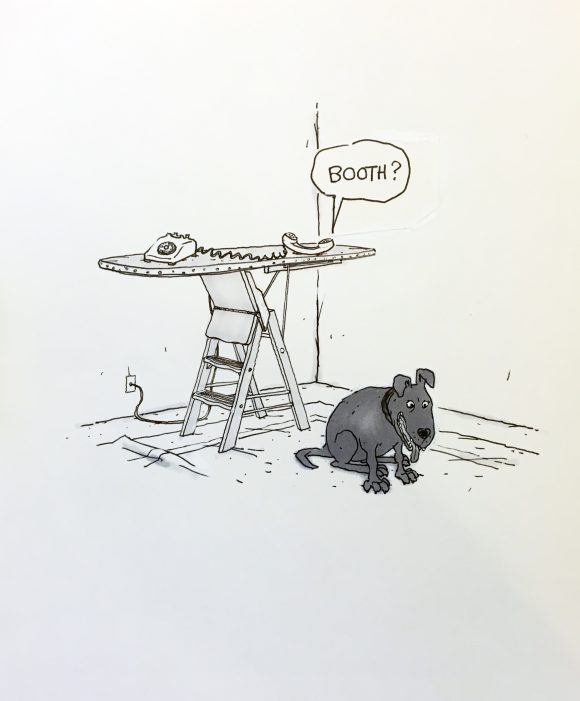 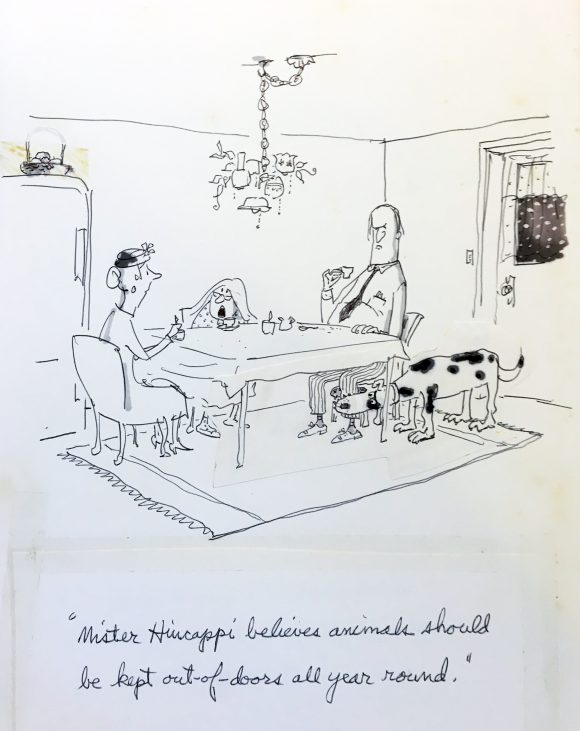 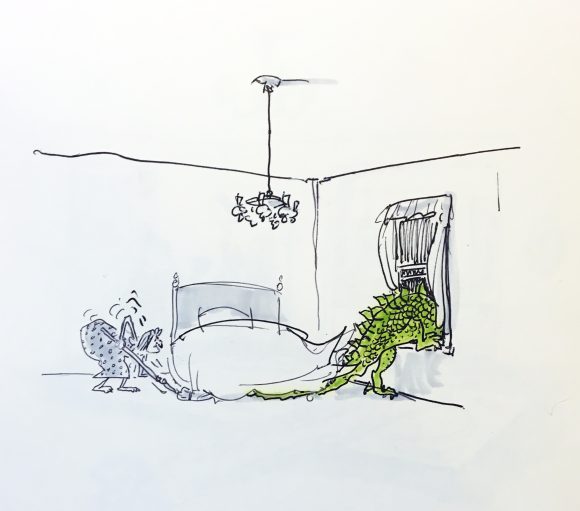 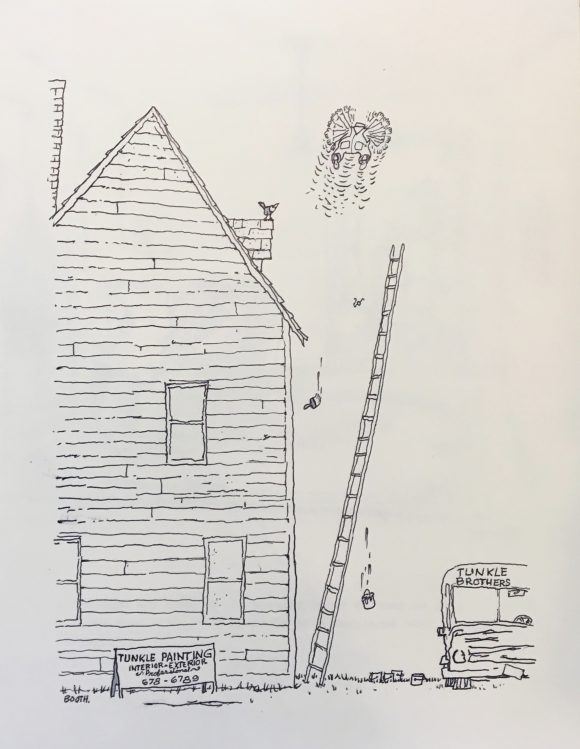 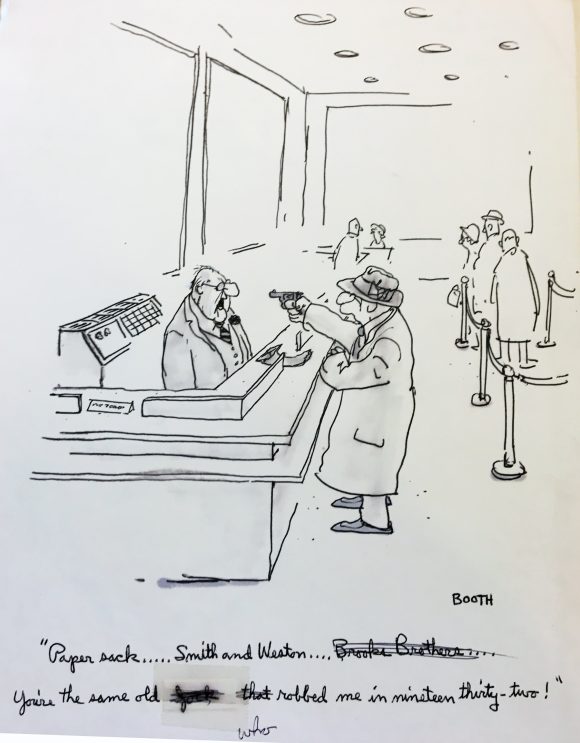 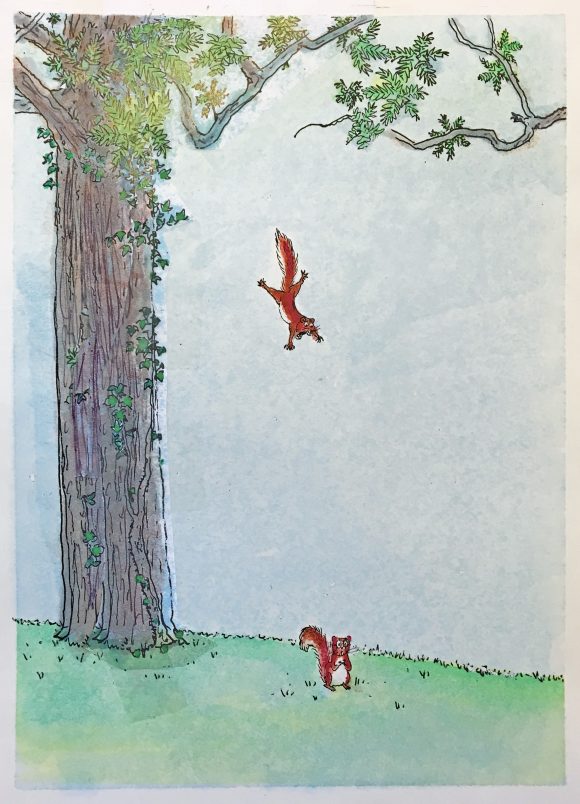 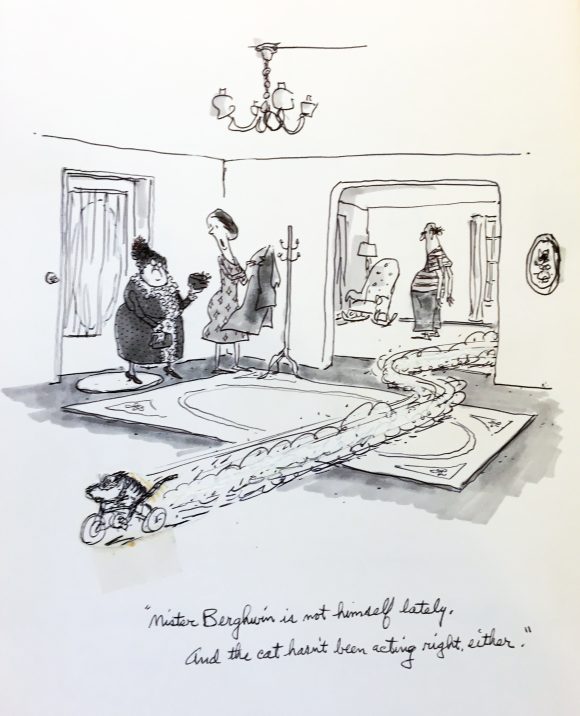 For more info on the Booth exhibit and the Society of Illustrators, click here!