TOYHEM: If you dig action figures, this is probably where you got your start…

After Dan accepted my pitch and I started digging in deep on my research for this article, something began to occur to me. I looked at all the colorful images from the past, at the figures and vehicles and playsets, at the exclusives and variants and overseas editions and it really hit me:

Fisher-Price Play Family is the gateway drug to action figures.

This stuff was a huge part of so many people’s childhoods, and especially mine. Growing up in the ’60s and ’70s, you’d be hard pressed not to find a living room or den or kid’s bedroom that didn’t have the beloved Fisher-Price universe of toys underfoot. It was ubiquitous. For me, I can see how the Play Family sparked my interest in more sophisticated action figures at every level. As I got a little bit older, I needed the “harder” stuff, but in all honesty never forgot the F-P offerings. Look over these images and tell me it doesn’t stir something in you, too.

Especially the dog. Amirite? “Iconic” doesn’t even scratch the surface of it. 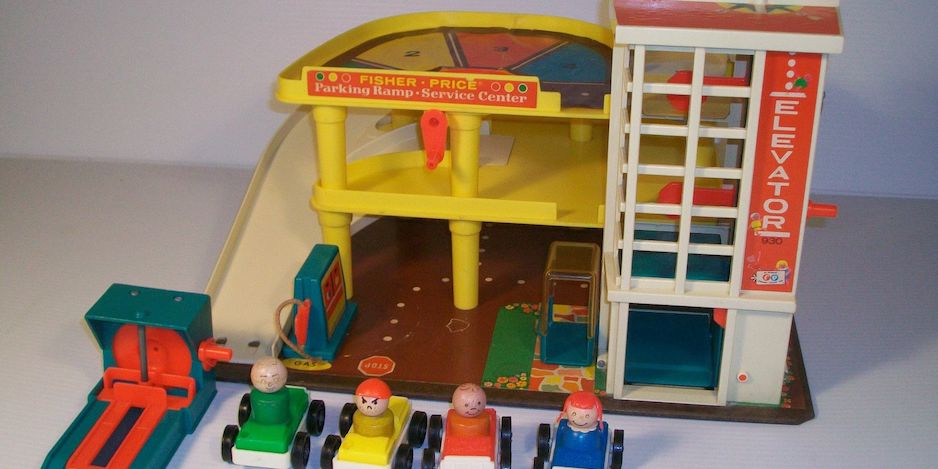 So, consider this an ode to the toys we had before Mego, before GI Joe and Barbie, before we frittered away all our life savings on Hot Toys figures and convention exclusive Funko Pops. Look upon this as a little tour of the ’60s and ’70s playthings that set us on those paths. 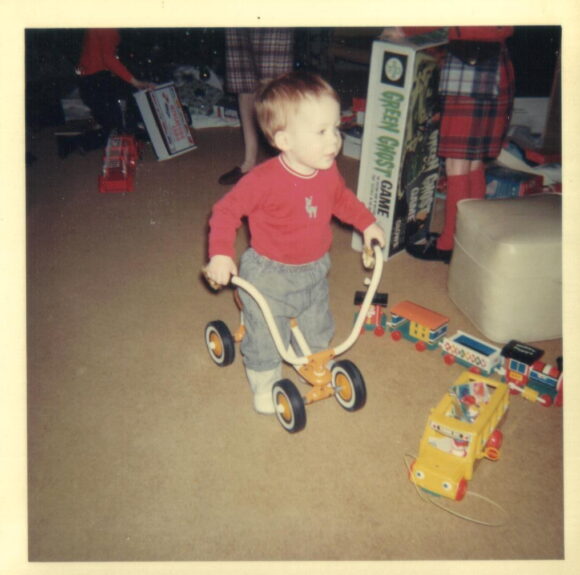 A portrait of the author as a young Fisher-Price fan

Not ranked, by the way, because c’mon… how could I?

(Although that dog would come first, of course.)

Play Family Family. Here they are in all their minimalist glory. I suspect I had the transition edition with wood bodies and plastic heads, but I’m not sure. Also, what’s up with “Butch,” the frowning bad-boy kid? Regardless, the dog is there, and all is good in the family.

Play Family School Bus. I can still remember exactly how the side doors opened on the bus. And I see everybody gets a name here — the dog is “Fido.” They were still making this set up through 1990. 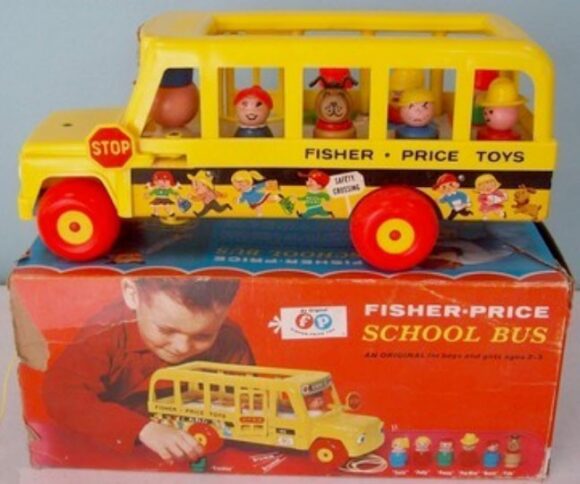 Play Family House. Everybody had this one, right? It was like a law or something back in the ’70s, that everybody had to own this and John Denver’s Greatest Hits. You can still hear the sound of the doorbell, can’t you? They also sold accessory packs with furniture and stuff for the various rooms and the patio. 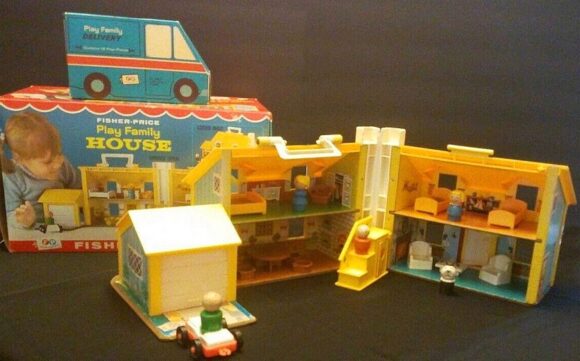 Play Family Fun Jet. Chunky and maybe not so aerodynamically stable, yet tons of fun. They also had an Airport set that included the Fun Jet. This is what led you to the Big Jim Sky Commander and the Barbie Friend Ship. 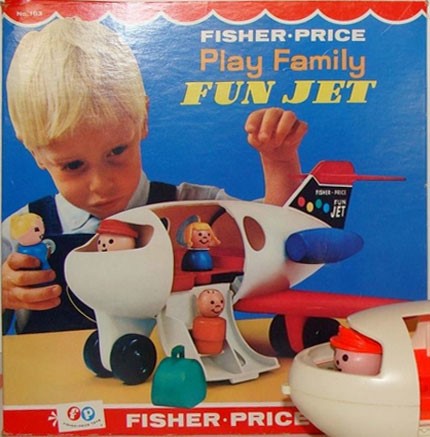 Play Family Ferris Wheel. This one had an actual music box thing that you cranked up. My only real concern here is that the operator guy looks kind of sketchy. Typical carny, I guess. 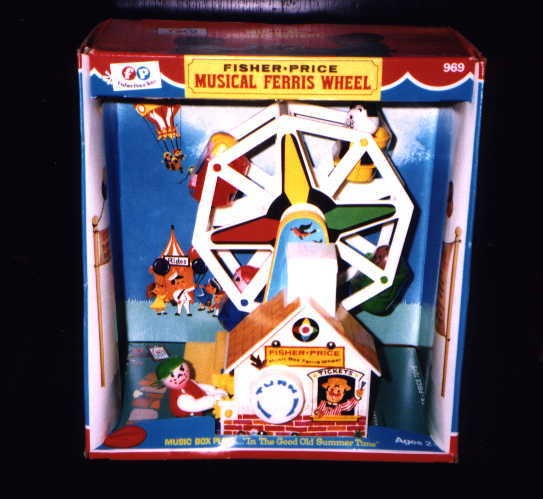 Play Family Castle. Now this one you’re going to have to just stop and stare at. Yes, I feel you. I mean, it had a bunch of rooms and a drawbridge and a dragon. Just lose yourself in it, friend. 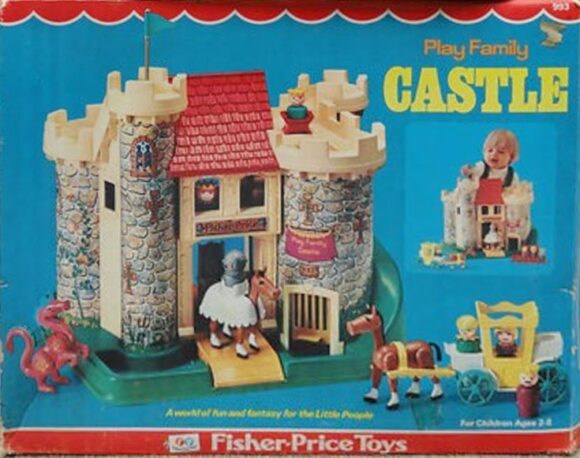 Play Family Farm Tractor and Cart. Yes, this one isn’t as sexy as other sets, but it’s one that I had and the simplicity of it is comforting. Plus, love those big, fat wheels on the tractor. 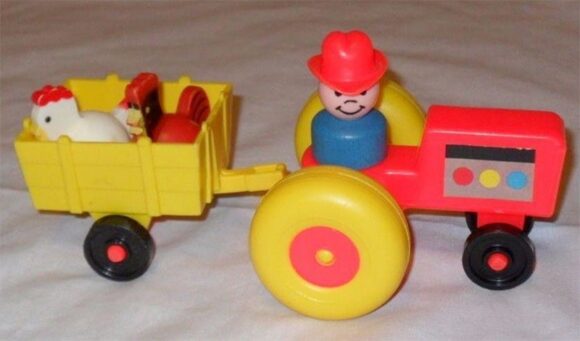 Play Family School. The kids next door had the School, and I always thought it was very interesting that it was both a playset for the figures, but also a role-playing toy for kids with the magnetic letters and the actual chalkboard. 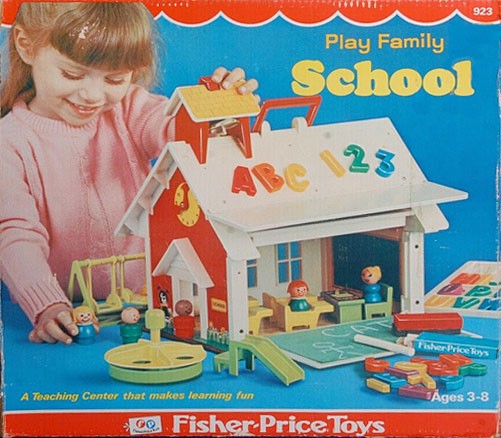 Play Family Garage. Here we go — instant iconic. I had it, Dan had it, many of you had it. I was never big on action features with my toys, but I ran cars up and down that elevator over and over again. Man, did I love this toy. Play Family “A” Frame. A very cool variation on the typical House. I didn’t know anyone who actually had it, but I remember seeing it in catalogs and it always caught my eye. Now, what the heck is the dog doing up on that ladder? Fido, get down! 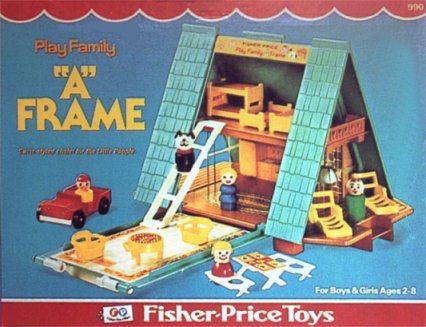 Play Family Dump Truckers. This one’s sort of a variation on the Garage, but it has something to do with matching colors and shapes or whatever. It looks very cool, though. Did you have it? Play Family Farm. I think the extra animals might be the real draw here — but the barn door that “moos”? I mean, c’mon; that’s some mind-blowing stuff right there for a little kid to process. Play Family Village. I had to end this column here, because after this, everything is just small. The Village was a beast, a monstrous playset that was the center of the Play Family Universe. The kids next door to me had this one and I was fixated on it. It had all those cars! And little letters to put through the slot at the Post Office! And the dog is on the roof. Of course he is. The dog is on the roof…