Columnist JIM BEARD picks his faves from the ’70s… 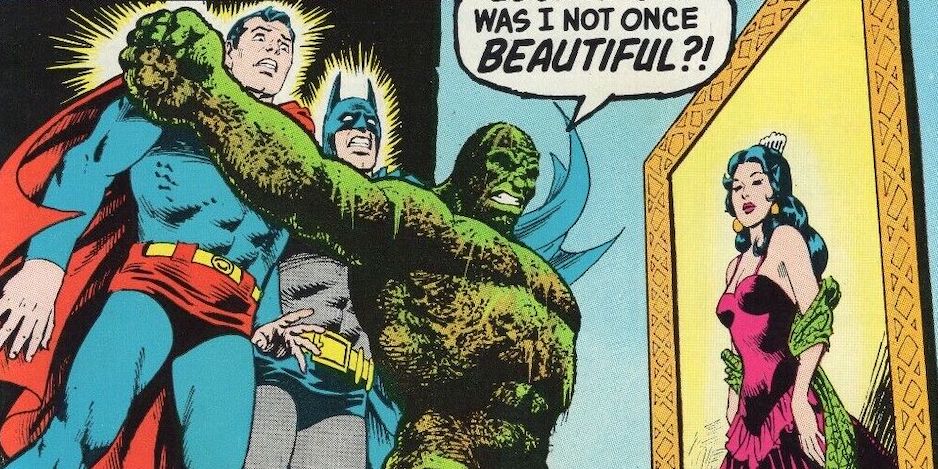 The late, great Nick Cardy is primarily known for his 1960s comic work at DC, both on the inside and outside of books, but I discovered him in my own “Golden Age” of comic books — the 1970s, and it’s that era I’m tapping here to honor the artist on his birthday. (He was born Oct. 20, 1920.)

Picking covers for this article was a journey not only down Memory Lane, but one of discovery, too. Nick seemed to do a lot of covers for my very first issues of DC titles, and all my favorites pretty much end up in 1973 and 1974. I also realized that a lot of the cover images I myself liked to look at and then draw with pencil on paper were Nick’s. It hit home while assembling this that the guy is definitely one of the foundation blocks of my early comic fandom, and I love that. 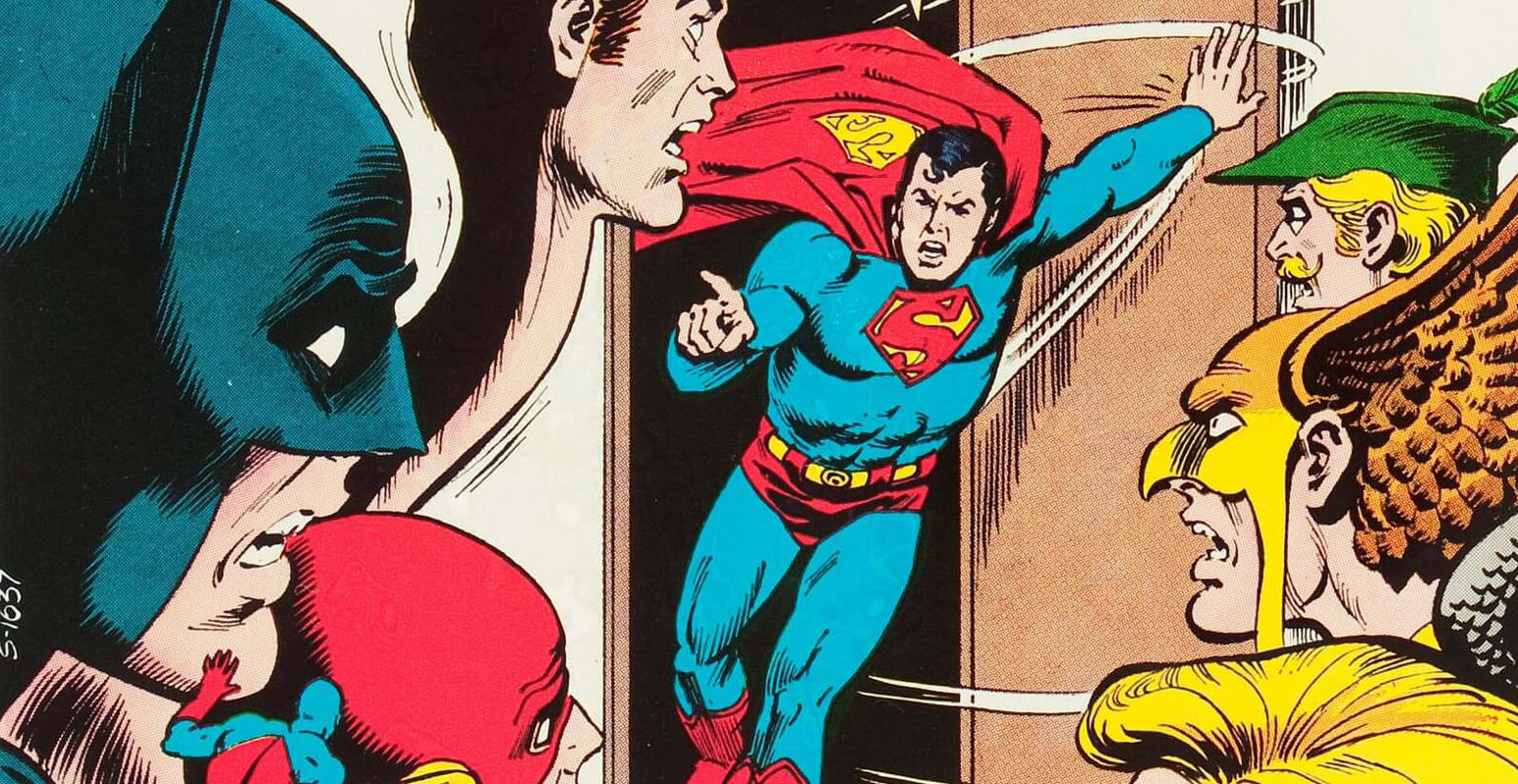 I could have picked a bunch of his classic ’60s work, such as Teen Titans, but that would’ve been stuff I saw first as reprints. The art I’ve picked here I saw new, as it was happening. And while it may have been after his heyday, to me it was all worth its weight in gold.

Please enjoy this time capsule of my favorite 1970s Nick Cardy covers. We’re going to go chronologically, just as I saw them back in those days…

100-Page Super Spectacular #DC-14 (Feb. 1973). I consider this book the first superhero comic I ever owned. I got it in late ’72, and my copy even has a date stamp on it. It also sports a wraparound Cardy cover that I remember just staring and staring at. 100-Page Super Spectacular #DC-17 (June 1973). These 100-pagers kickstarted my interest in superhero history. I’m so glad Nick drew the covers on the ones I got, especially this one, featuring not only the Justice League, but my lifelong faves, the Justice Society. 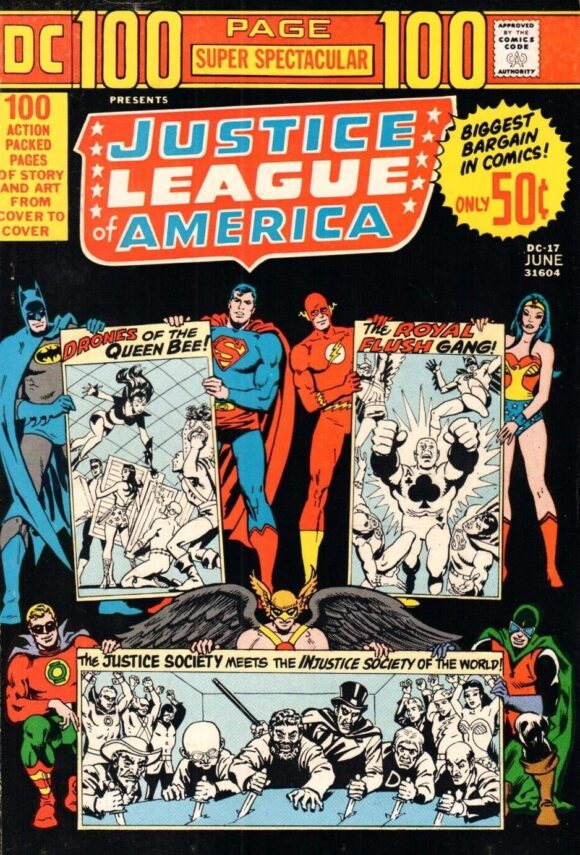 Superman #266 (Aug. 1973). God, do I love this cover, my very first Superman mag. Just look at that force and energy in it. I was also fascinated by trying to figure out where Superman’s fist went. Batman #252 (Oct. 1973). Another Cardy cover that just fascinated me as a young Monster Kid-in-the-making. The Spook is one of my all-time favorite Bat-baddies. 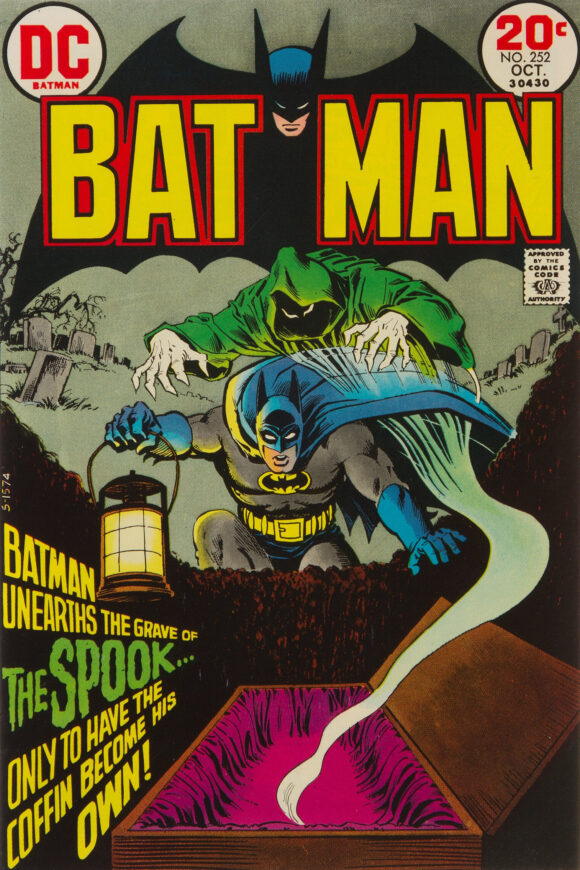 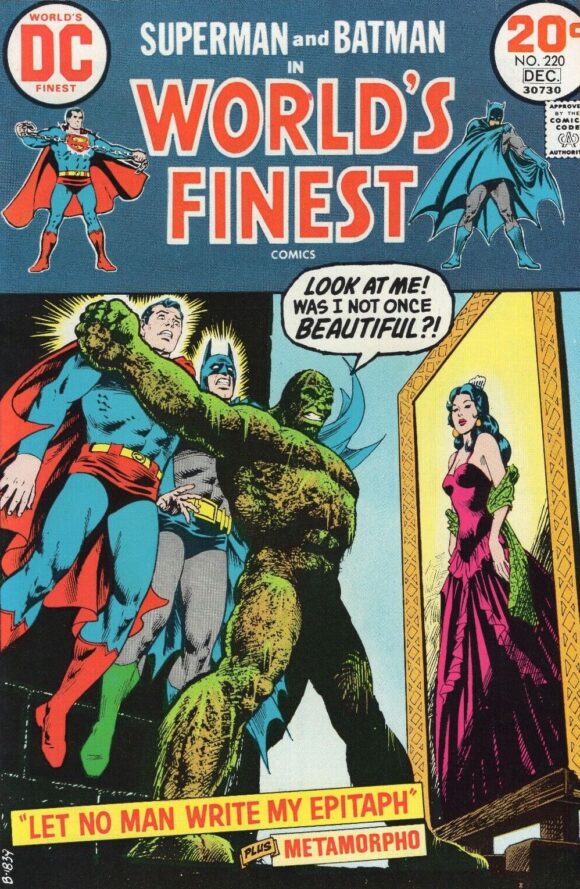 Action Comics #430 (Dec. 1973). What is it about this one that makes it a Cardy favorite? It’s something about the angles, the perfectly drawn building, and the symmetry of Superman and the monster’s flights in and out of the building. I think it’s kind of a master class in comic-book covers. 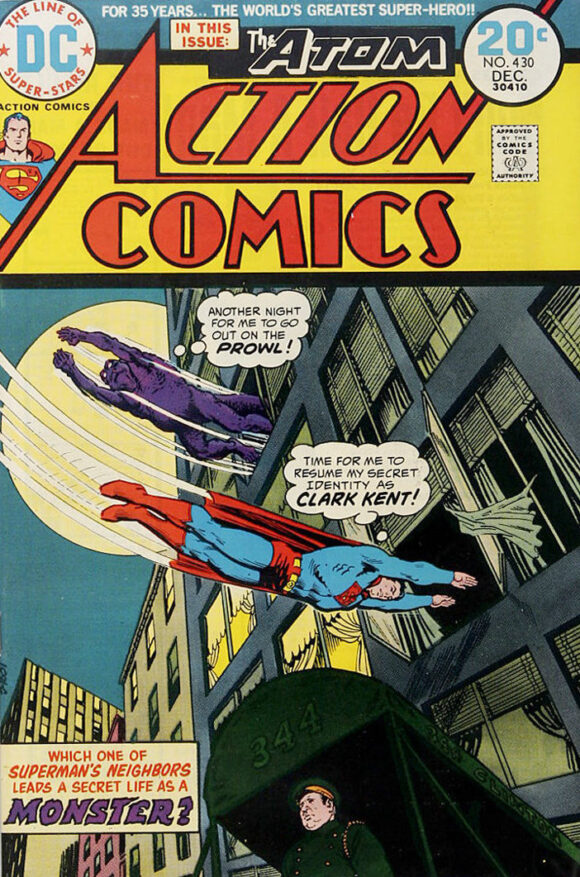 The Flash #225 (Jan.-Feb. 1974). My very first issue of the book, and again, Nick is there. I met Professor Zoom here, and again I was fascinated by the layout of the main figures and the background figures. 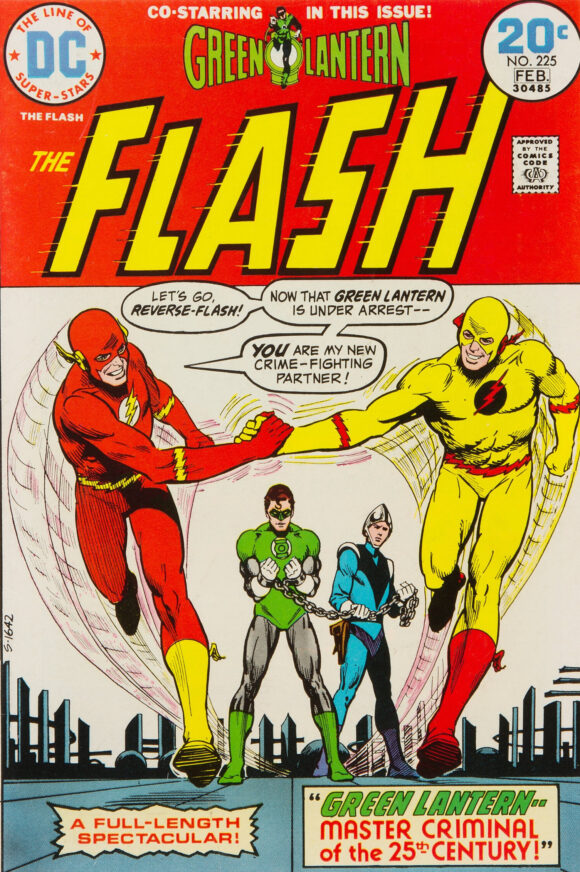 Justice League of America #109 (Jan.-Feb. 1974). Dare I say it? Another first issue for me, and Nick is by my side… except, actually, he put me right in the middle of a meeting of my favorite superheroes! And an angry Superman has just crashed it! The explosive tension is palpable. 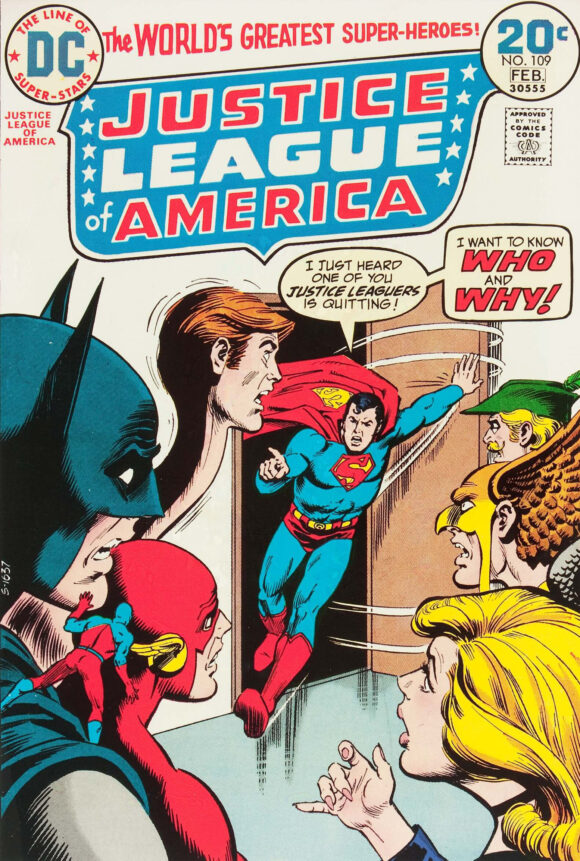 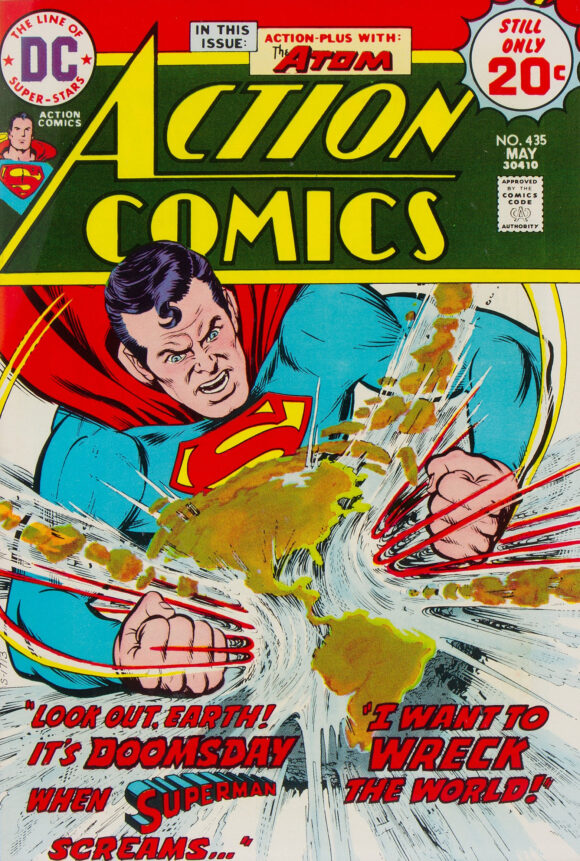 Superman #279 (Sept. 1974). Probably one of my most favorite Cardy covers of all. I loved Batman, of course, but Batgirl always held a special place in my heart. I love the way Nick draws her here, though of course she’s in mortal peril. (But when wasn’t she, really?) 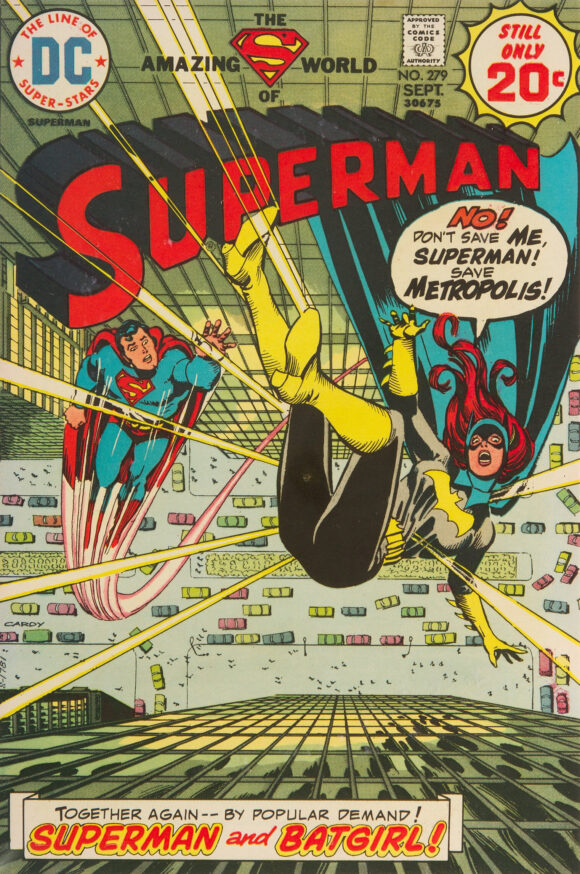 Batman #259 (Nov.-Dec. 1974). Nick did a lot of these multi-image Super Spectacular covers, and always excelled at every part of them. I just love that he got to draw the freakin’ Shadow for a Batman comic. The Flash #230 (Nov.-Dec. 1974). Another spooky Cardy image. There’s some real menace here, or at least my 9-year-old self still thinks so. By the way, I didn’t know who Dr. Alchemy was before I got this one. Justice League of America #114 (Nov.-Dec. 1974). Man, Nick was really cookin’ with these late-’74 covers. Again, I love the angle here, as well as the idea of cave people DC heroes within the beam and their unchanged compatriots without. Another Cardy masterpiece.